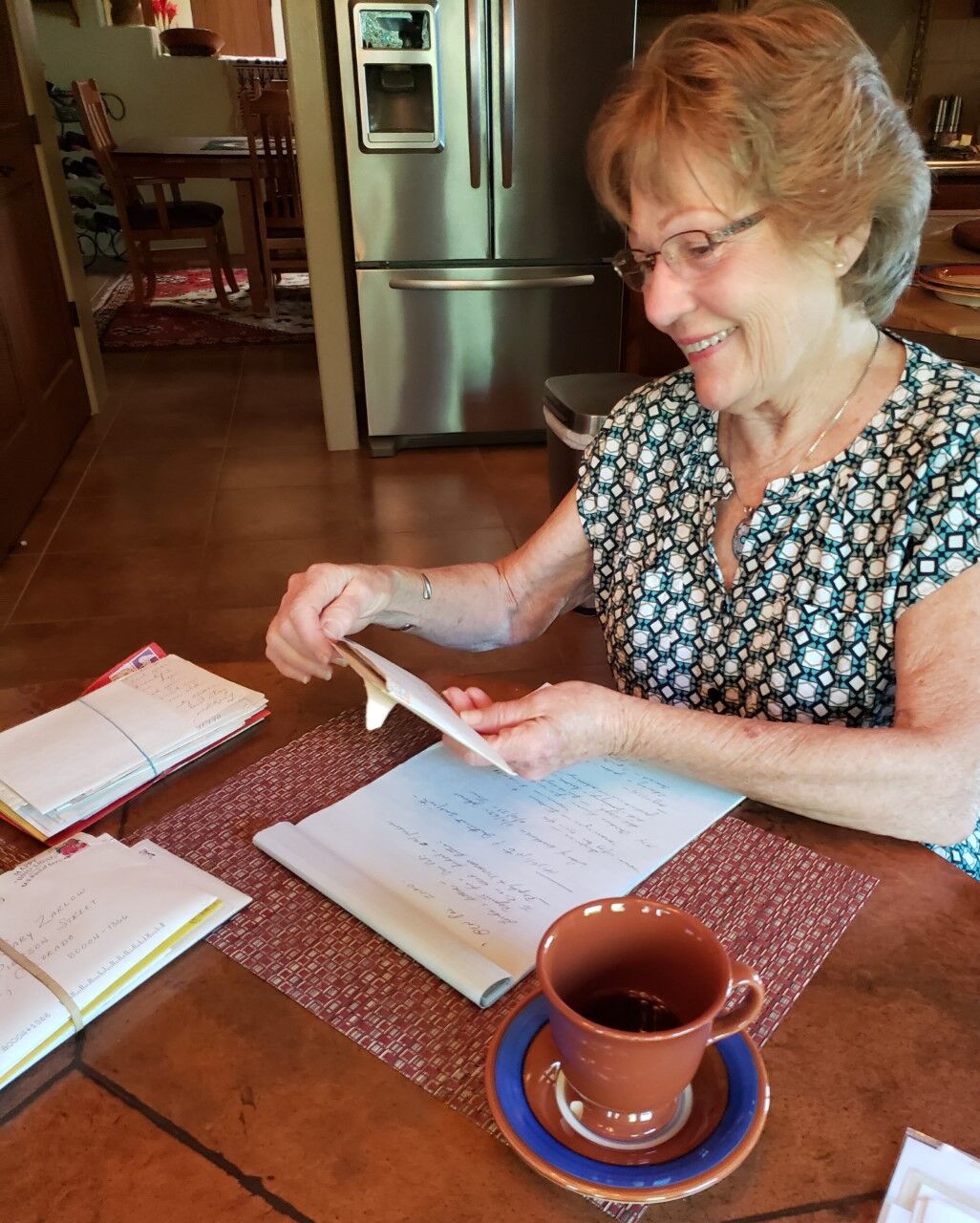 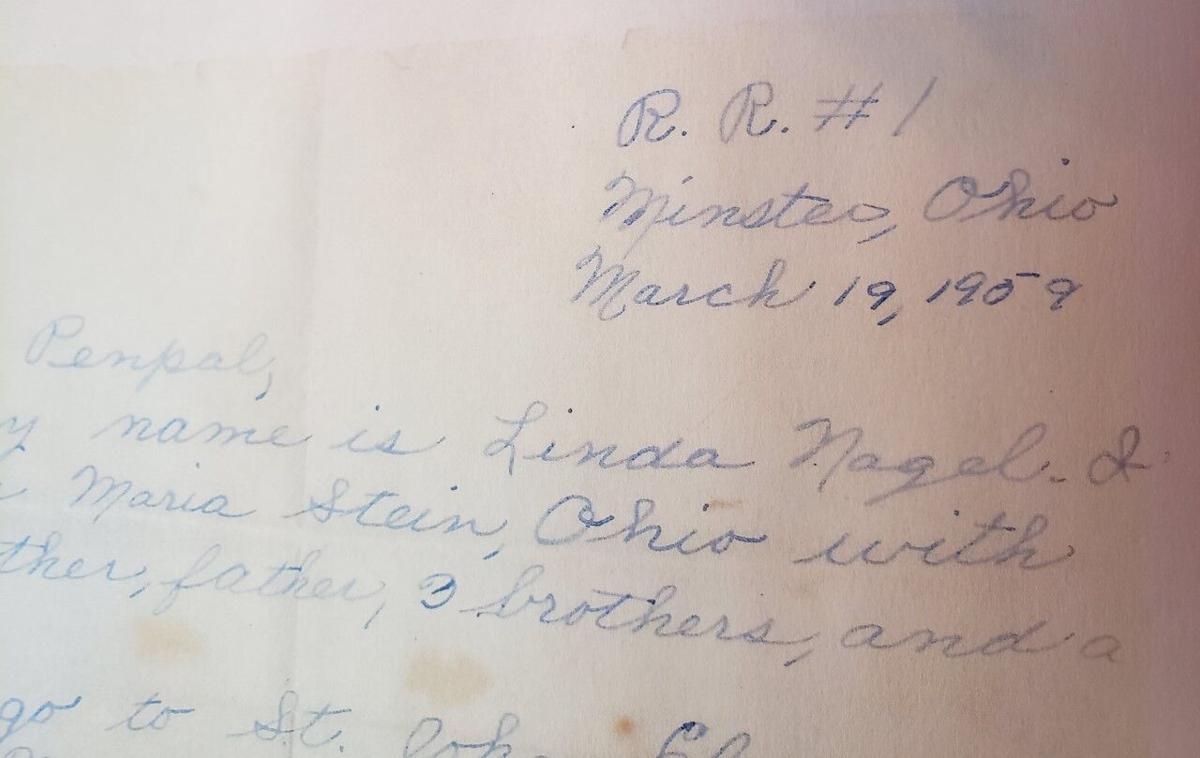 This letter launched 62 years of friendship, from when the pen pals were age 12. 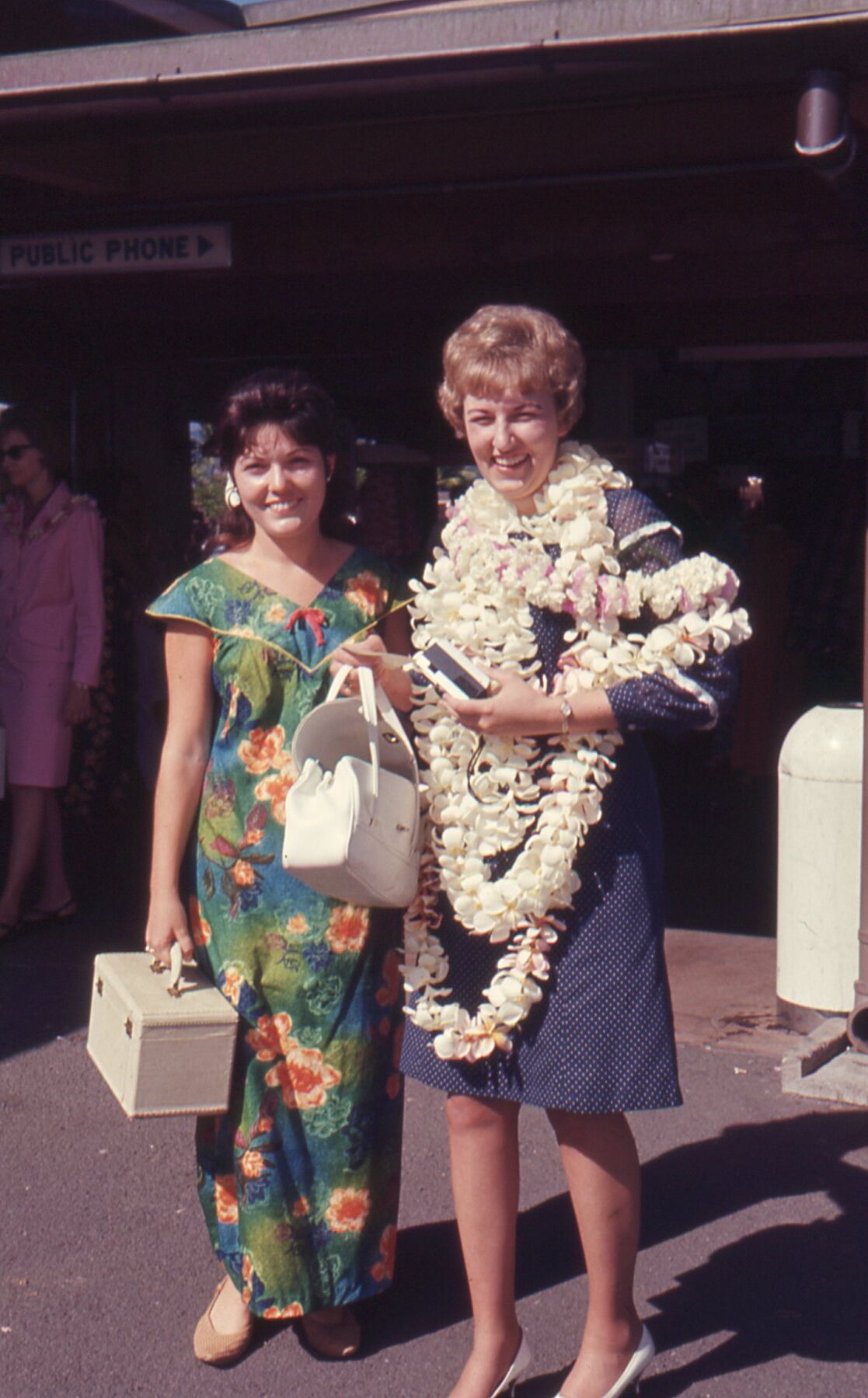 The pen pals' first meeting, in Honolulu at age 21. Linda Nagel-Koenig, left, just arrived from Ohio. At right is Norma Zarlow, born in Hawaii, the daughter of immigrants from Spain. 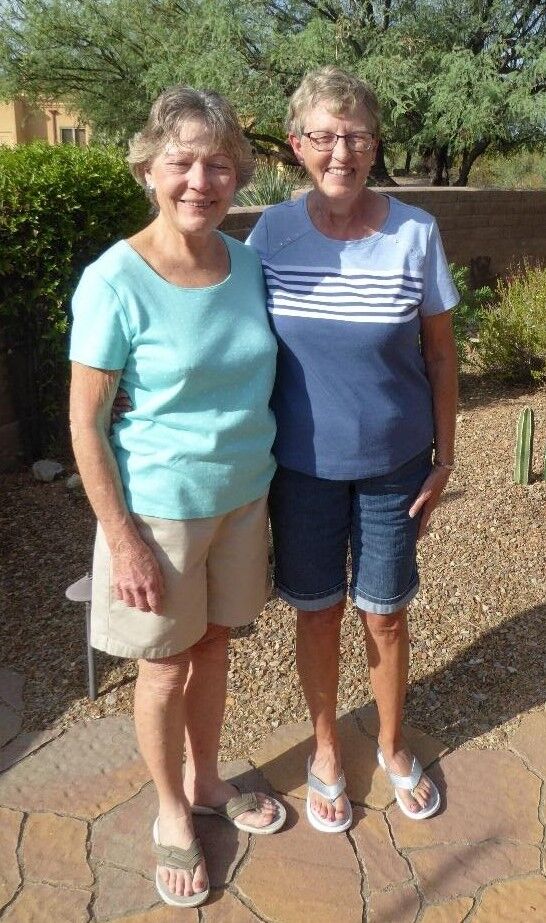 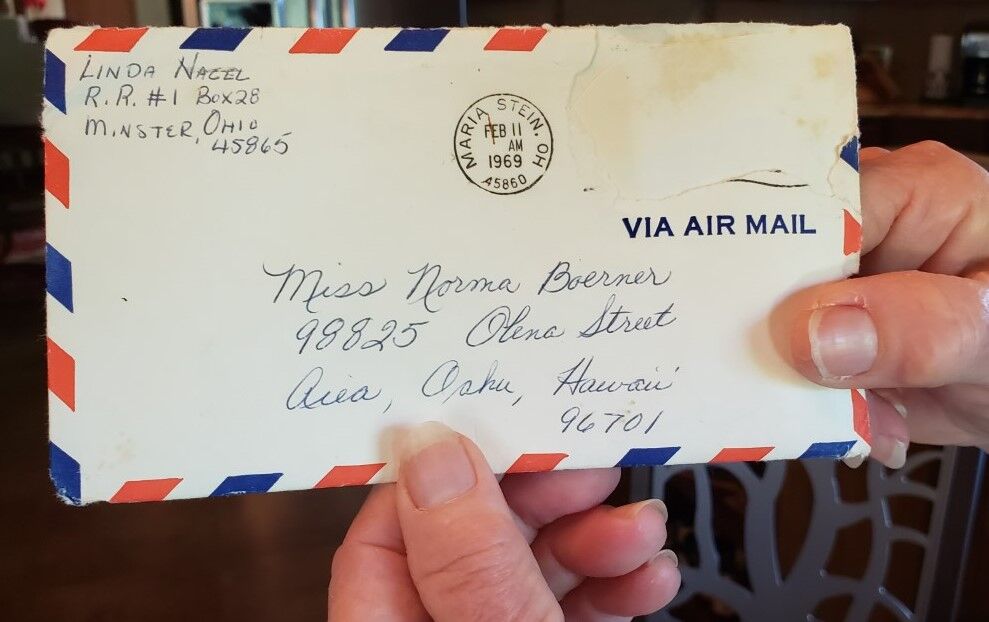 It was always a good day when a letter from Linda landed in Norma’s mailbox, such as this one from 1969. 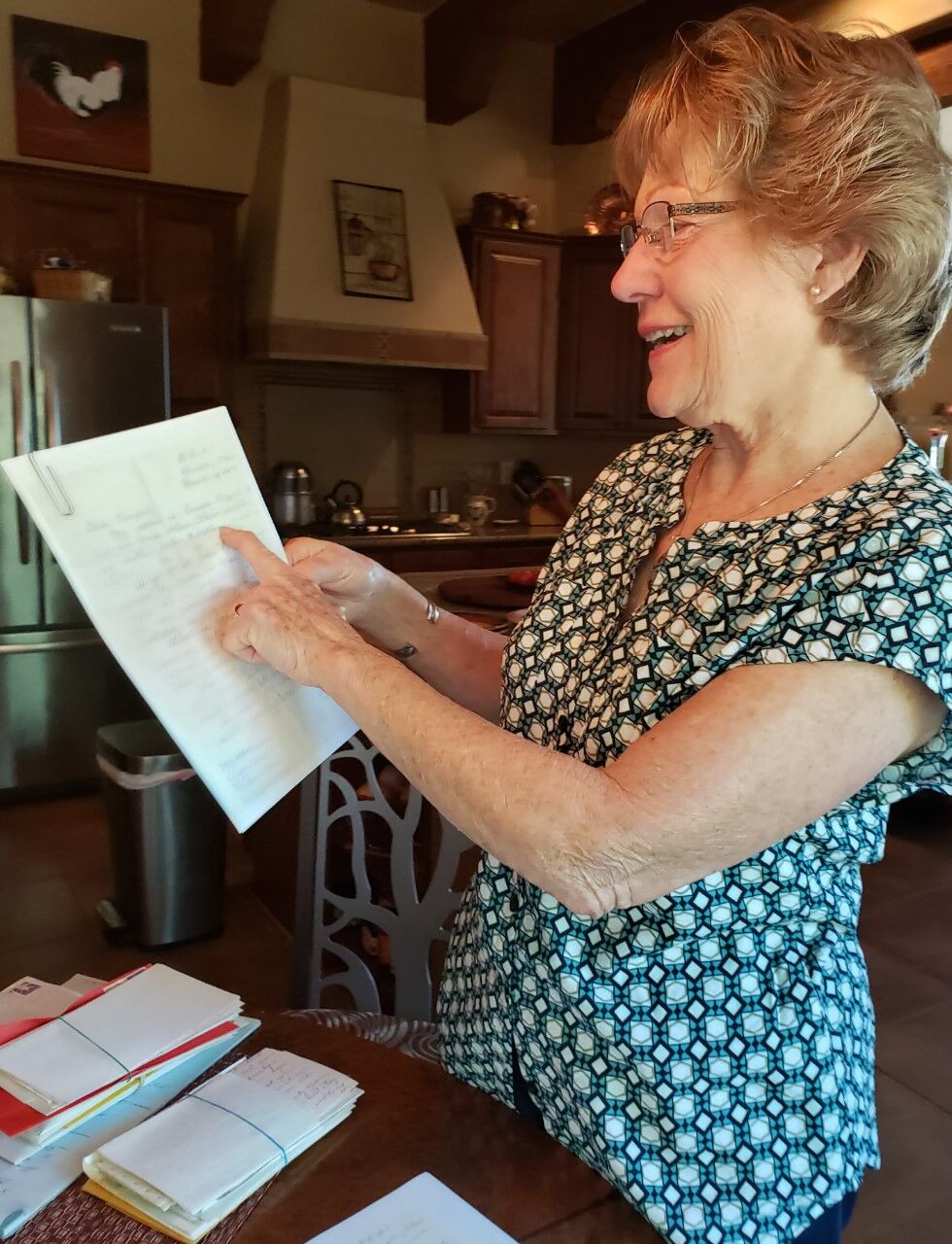 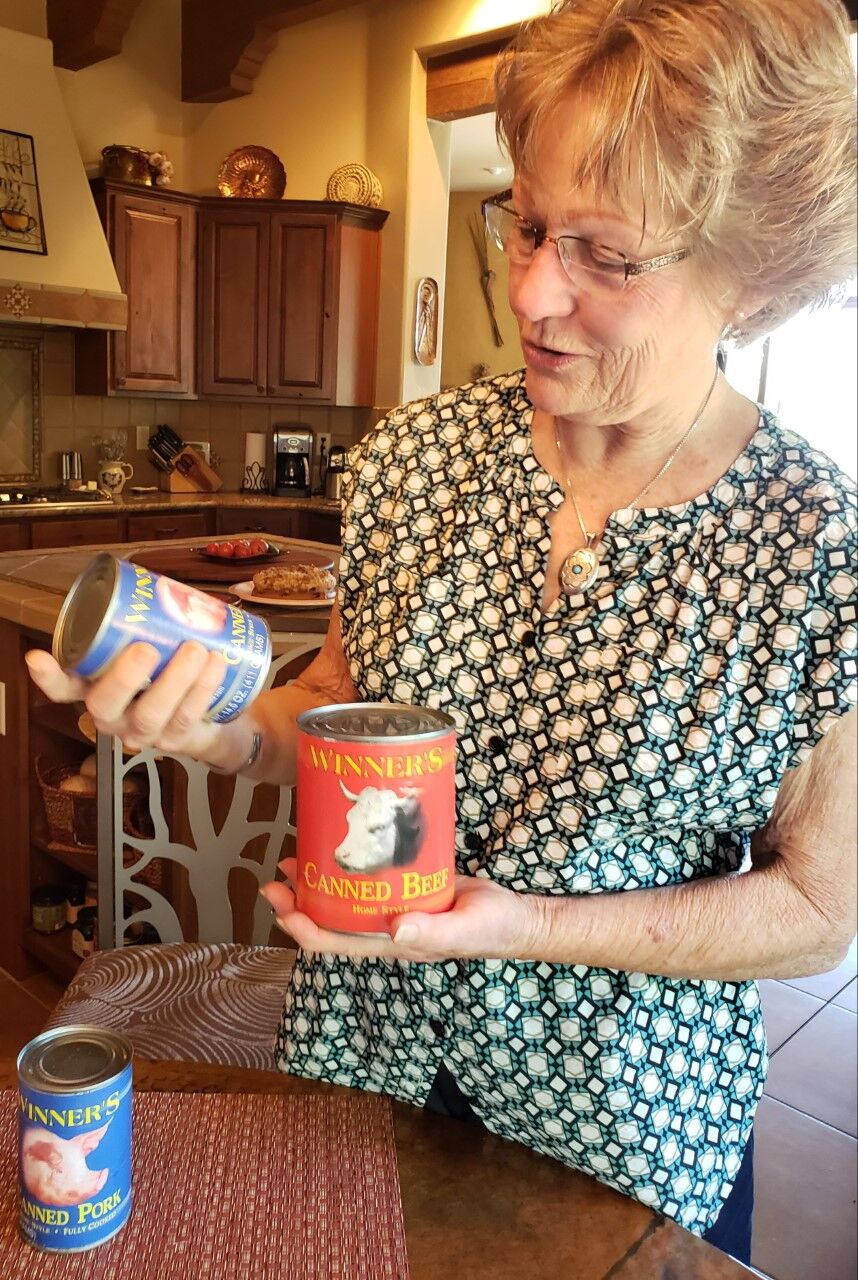 This letter launched 62 years of friendship, from when the pen pals were age 12.

The pen pals' first meeting, in Honolulu at age 21. Linda Nagel-Koenig, left, just arrived from Ohio. At right is Norma Zarlow, born in Hawaii, the daughter of immigrants from Spain.

It was always a good day when a letter from Linda landed in Norma’s mailbox, such as this one from 1969.

When Norma Zarlow read a recent Green Valley News account of a pen pal program pairing local teens and seniors at La Posada in Sahuarita, she wrote to share her nearly lifelong friendship forged halfway around the world.

The ladies, pen pals since they were 12, have lived through a lot together, much of it shared through paper and ink.

Births. Deaths, some tragic and untimely. Joys, illness and other challenges in between. Stuff you didn’t tell the parents, maybe nobody in a small hometown.

They’re all part of 62 years of letters exchanged between the two women, now 74, that began in 1959, prompted by an Ohio teacher who sent a packet of student letters to a school in Hawaii hoping that someone would write back.

It’s not a record; Guinness cites the longest-running pen pal relationship at 78 years. Meaningful, though.

Immediately discovering they were both grade schoolers from rural America, albeit vastly different reaches, Norma Zarlow, now of Green Valley, and Linda Nagel-Koenig of Maria Stein, Ohio — about an hour north of Dayton — signed up and got their pens busy.

Six decades, thick and thin and a ton of technology later, they now find email, Zoom and phoning easier options.

Back then, the 4,400-mile span between their homes — Norma’s in Hawaii and Linda’s, the Midwest — seemed worlds away and many more travel hours than now. Neither had been seen that much water or mountains.

Early exchanges covered home life, school and personal interests. Both valued their hard-working parents, raised animals and had tight-knit families that helped support their desire to meet in person.

Sprinkled in were some sobering realizations – challenges for Norma, of Spanish descent, assimilating into Pacific island culture; and an account of an uncle stationed at Pearl Harbor in 1941, who was aboard a naval destroyer when it left on patrol the night before the Japanese strafed Oahu, killing more than 2,400.

Always feeling as an outsider among Pacific natives because she is white, Norma worked hard to succeed, majoring in business and education at the University of Hawaii, then moving to higher ed at Cal Sate University and education administration in Colorado.

Linda attended business school in Ohio then worked as a data processor near her hometown before starting a family.

“I had the career, Linda had three kids.”

Aside from divergent paths, their friendship only grew stronger.

“We always seemed to have commonalities in our home life,” Norma said.

Linda, from a heritage of German farmers in Minster, Ohio, wrote of the family’s 120-acre farm near a town full of churches. Wheat, oats, cattle, hogs. A sister, three brothers. Two brothers who died in car crashes about five years apart, both young.

She and relatives built homes on the family plot, most of whom still live there, raising families, tending fields, butchering chickens, often for charity, and canning endless harvests.

Linking with Norma opened her world with visits to each other’s home states, then to adult homes in other states. Native foods of Hawaii, cultural centers. Rodeos and the mountains of Colorado. Observing wildlife from Norma and husband, Gary’s, dining room window on her first visit to Arizona, with husband, Carl, and grandkids, visiting produce facilities in Rio Rico.

As an adult, Linda did housekeeping for a Catholic seminary in Maria Stein in between farming. Letter-writing was a respite from exhausting chores.

“The biggest impact of being a pen pal was what Norma did for me,” she said. “We were kind of like sisters. I don’t feel like I repaid.”

Not as Norma tells it. She reveled from Linda’s tales taking grandkids to Cincinnati Reds games and years of not missing a sporting event involving brothers, sisters, grandkids and other family. Fishing and zoo trips. She still marvels at gifts of canned goods from a ma-and-pa store called Winners, which sport likenesses of the animals whose meat is inside.

“Canned goods made a big impression,” she said. “In Hawaii, we had to really stock up on goods when I was a kid.”

In one letter, Linda wrote of canning: 11 bushels of tomatoes, 11 pints of pickles. In another: 11 pints of green beans, 12 of wax variety, another 12 of beets, eight quarts of mixed vegetables, 19 pints of applesauce. Ketchup, rhubarb and corn, juices. She also helped bale hay and straw.

“Sorry, didn’t have time to write.”

At 19, Linda got wanderlust and eventually talked her parents into sending her to Hawaii to meet Norma. They were 21 when they first met in person.

“My parents finally called to see if I’d arrived,” she said. She had, but homesick as ever. It was her first time away from home. Norma as tour guide kept her busy. Now, Linda says, she’d return to the Aloha State in a heartbeat.

Norma recalled an early visit to Ohio wondering why the shower in the basement where she slept among canned goods was always cold. She thought it was a regional thing. No, she eventually learned.

“The pipes were installed backwards by one of the family members who helped build the house,” she said.

They felt so comfortable with each other, sharing things.

“When we’d get together, it was like we’ve never been apart,” Linda said. “I could tell Norma things I probably wouldn’t tell my mom.”

Throughout their marriages, more get-togethers solidified their bond.

In all, they’ve met in person seven or eight times, each “just continuing our conversation,” Linda said. “I felt like I could confide in Norma, tell her things I wouldn’t have told anyone around town.”

They most recent saw each other at Norma and Gary’s in July. They’ve written every two to three months, as farm life allowed, no lapses.

Both husbands survived open-heart surgery. One letter mentioned the kids announcing their last day of school being their birthday present to mom.

“Lots of work but we do enjoy it,” Linda wrote. “Why? We get to be with many friends.”

She regards pen pal exchanges “a tremendous way to air out things.”

Norma recounted losing three acquaintances to COVID-19. For Linda, the isolation was hard on family get-togethers.

It’s a smaller world now but no less rich, although there aren’t many pen pals among the younger crowd, both women said.

“Not now with the electronics,” Linda said. “But I’ve got the iPad, play games. It’s how we live.”

“And our handwriting isn’t as good as it used to be.”

Years of exchanges “meant more than writing letters and sharing the happenings of their lives. It became a close relationship of family life with its ups and downs,” Norma said.

“We were there for each other if we had to be. Now that we’re older, yes, we’re phoning more, but didn’t really start until three of four years ago,” Norma said.

“The joy when you’re a kid, sitting on the lawn reading a letter, you read and reread, it meant a lot to get that letter. As I read over previous letters last night, I know why I have a pen pal – they’re the tie over the years that bind you.”