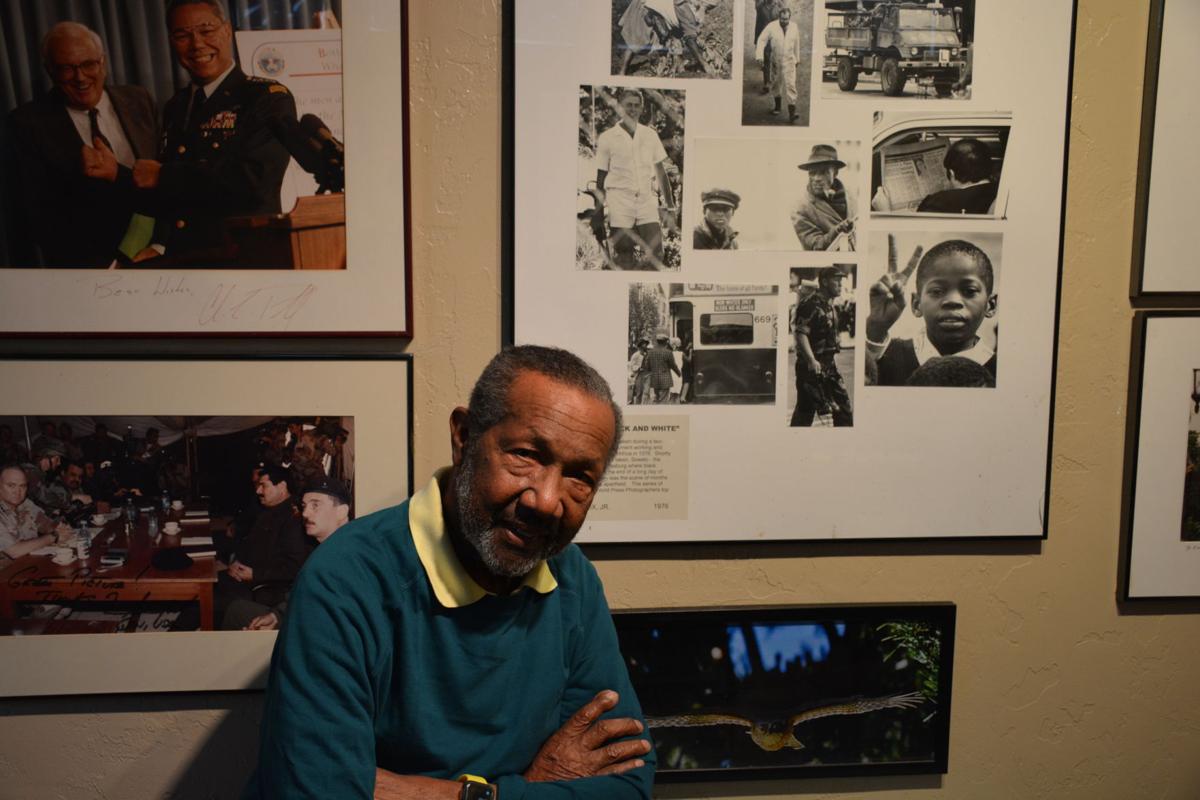 Ernie Cox Jr. worked at the Chicago Tribune as a photographer for 41 years. He and his wife, Deborah, have been living in Green Valley for about 21 years. 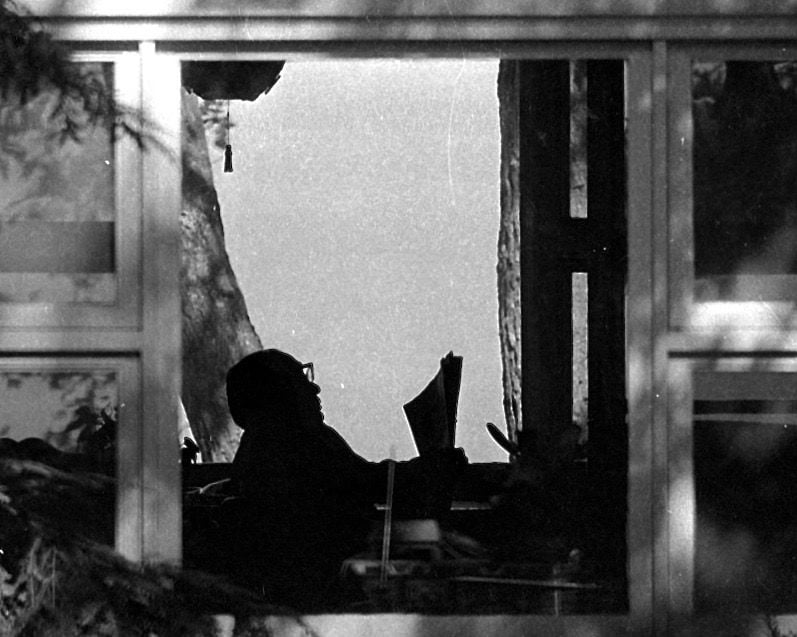 While working with the Chicago American, Ernie Cox Jr. captured a picture of Mayor Richard J. Daley, who hadn't been seen for a couple months after heart issues. 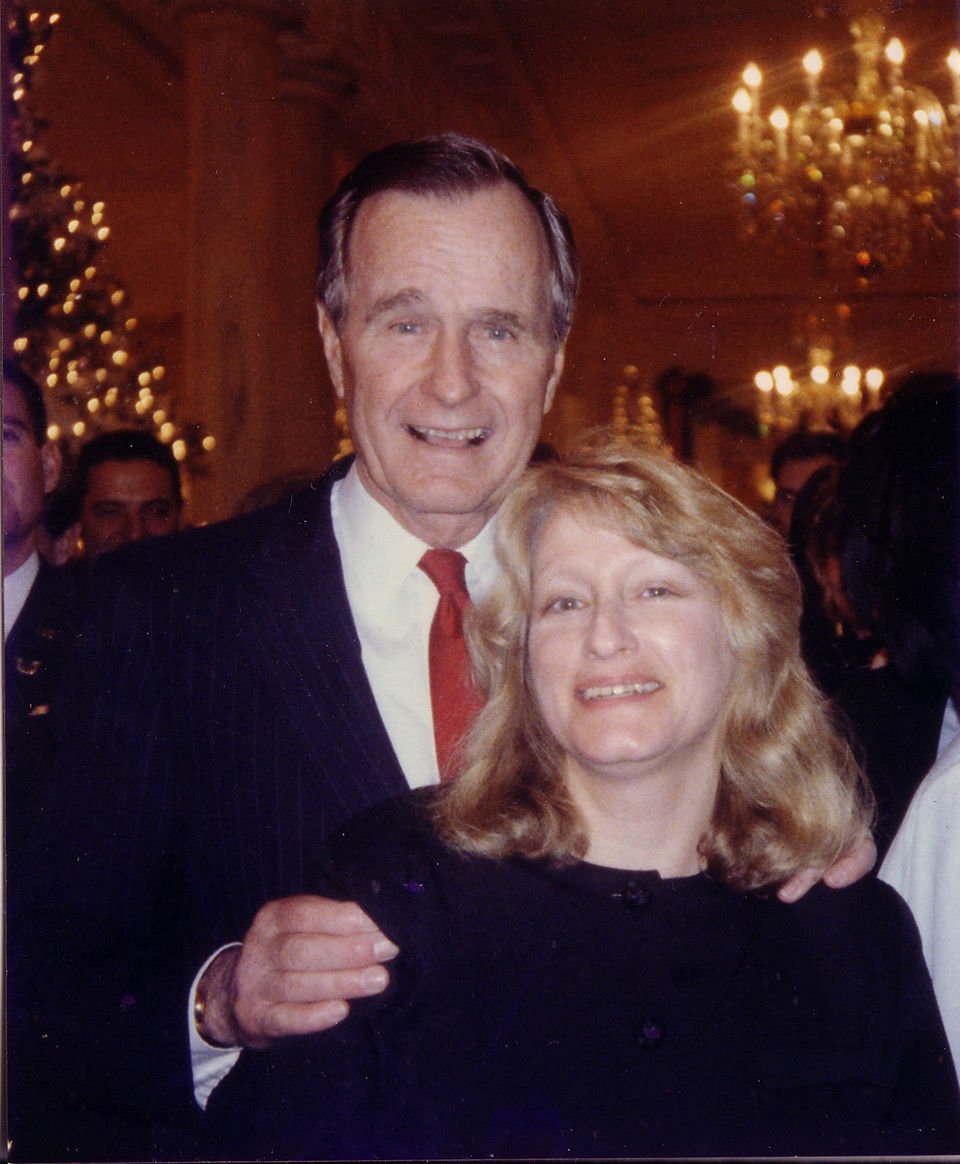 During a Christmas party, President George H.W. Bush patiently waited for Cox to get his camera working while he posed with Cox's wife, Deborah. 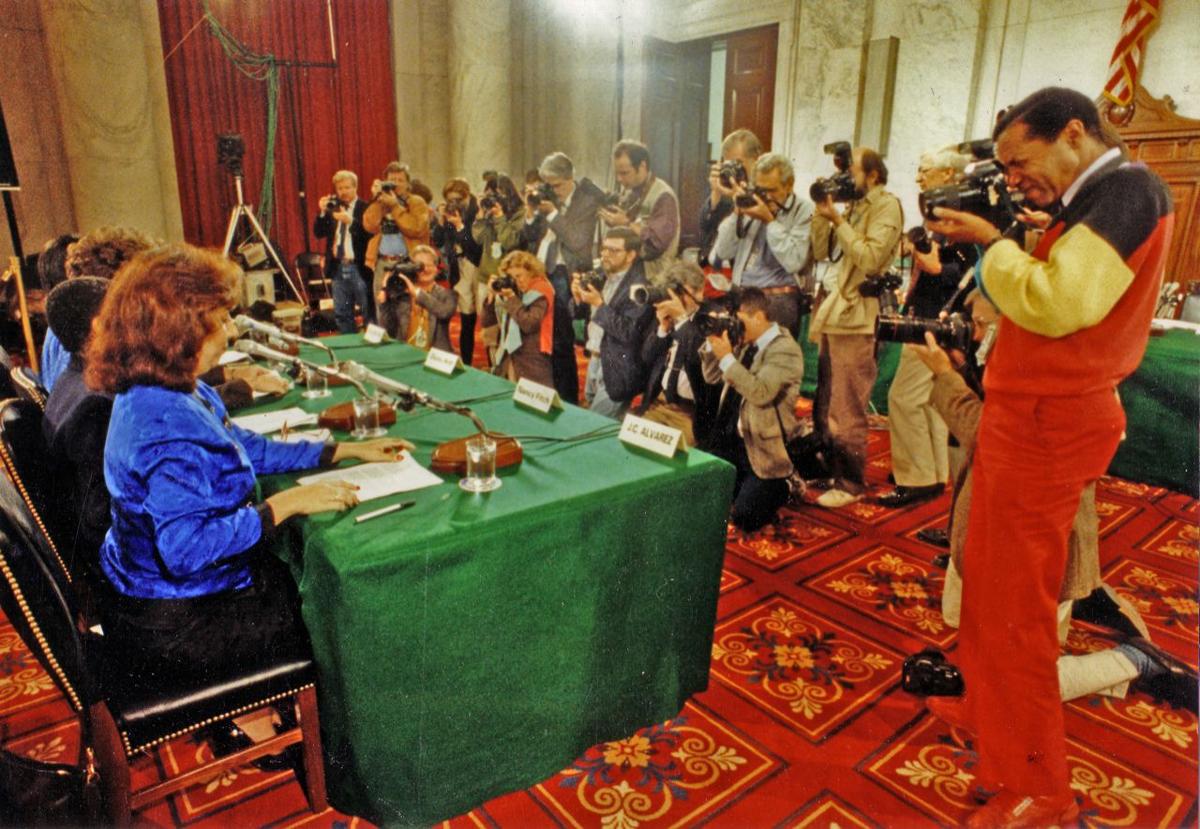 Ernie Cox Jr., right, worked at the Chicago Tribune for 41 years. This photo was taken in 1992. 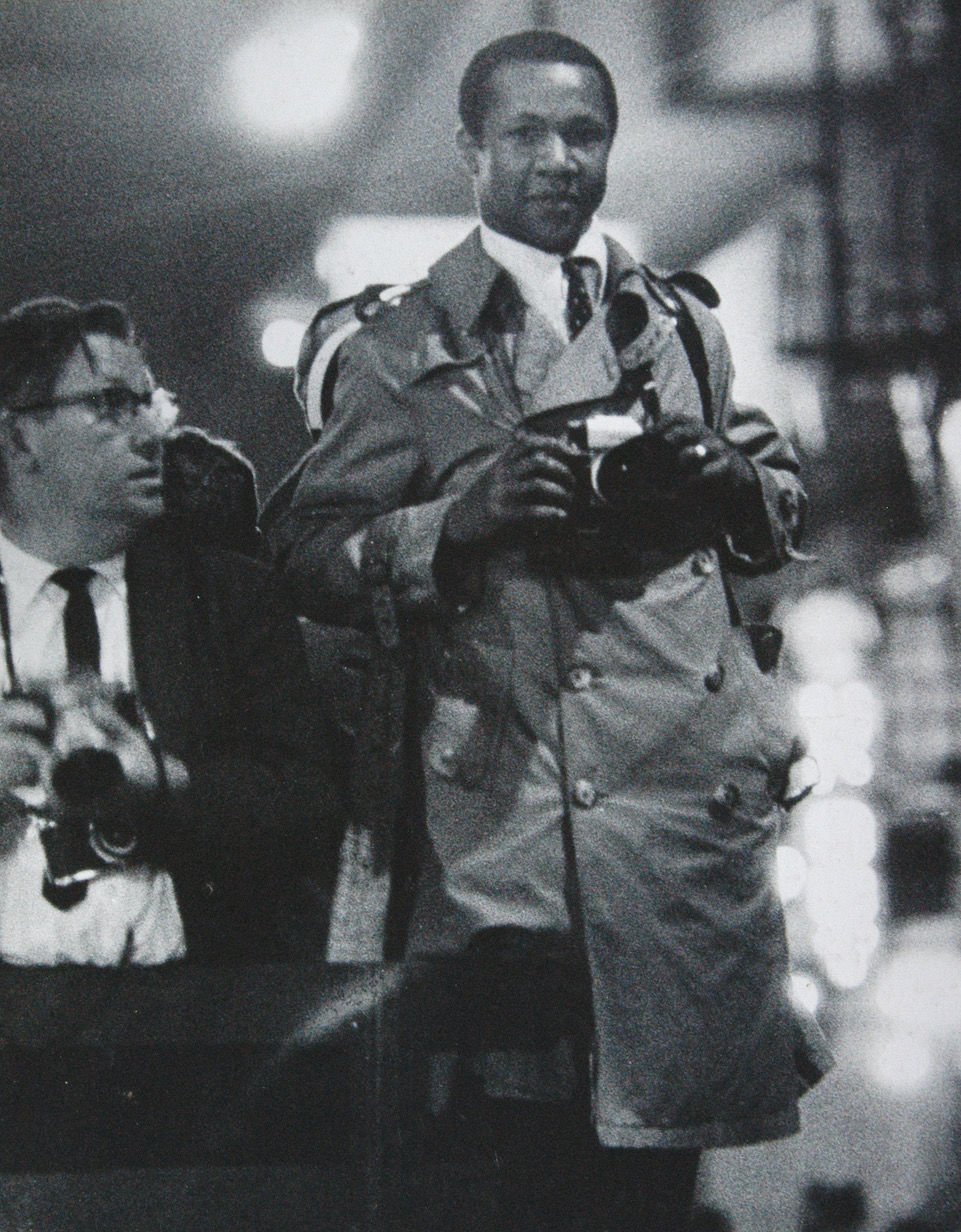 Ernie Cox Jr. on the back of a truck taking photos at a presidential campaign parade held by Hubert Humphrey in Chicago. 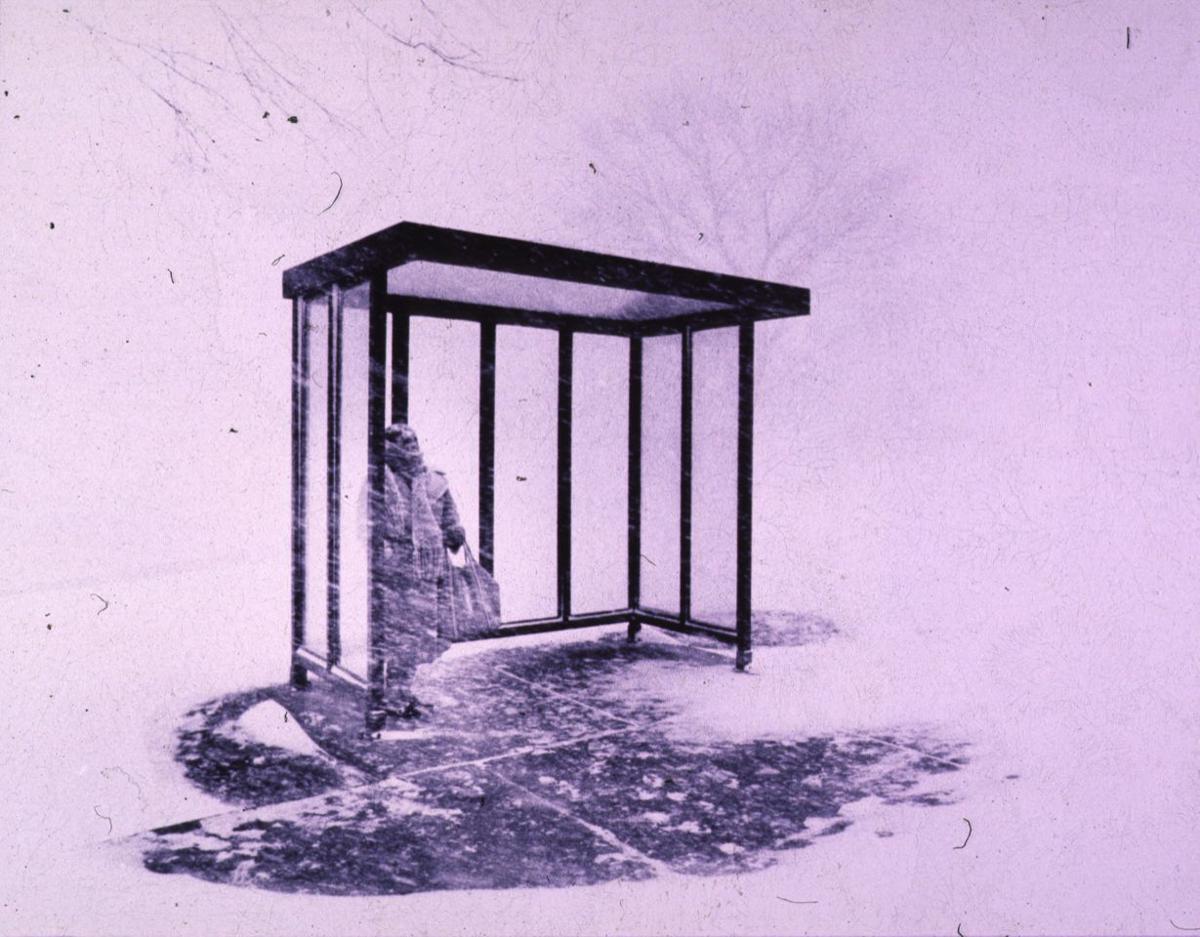 Ernie Cox Jr. captured the image of a woman standing at a bus stop in Chicago during a snowstorm. There is a museum behind the woman that is obscured by the snowfall. He also gave the woman a ride, adding that he didn't think there were going to be any buses on the road.

Surrounded by photos, Ernie Cox Jr. sits at a desk in his Santa Rita Springs home, looking back on his time capturing American history.

It's a story that goes back to 1957, when Cox began working for the Chicago American, a newspaper owned by the Chicago Tribune. It was a time when major metropolitan papers dominated the news industry and Chicago politics routinely made national headlines.

Cox, 82, started working for the paper straight out of high school and trained with seasoned photographers.

During those first days, he didn't hesitate to capture his first couple of images — one of a person holding a piece of aluminum to sunbathe in the streets of Chicago, and the other of a woman sitting on a bricked-in window sill. Cox still remembers her lounging there as she puffed on a huge cigar.

"If I saw a picture, I ran over there and took it right then and there," he said. "Taking these couple of pictures, they were very impressed that I'm spotting things right away. I had the eye for what was out there and didn't hesitate to do it."

Having an eye and jumping on a great shot were a fundamental part of making it in an industry where the competition was fierce and being aggressive went with the territory, he said. And he learned from the best.

"I had great fun with these guys in the early days when they were around," Cox said. "These were older guys, so as time went by they started to retire. I really miss those guys a lot."

Cox's first regular assignment was covering high society. The night assignments allowed him to go to school during the day.

Ernie Cox Jr. started shooting photos as a kid; his father made a living taking photos in nightclubs, so he was a natural. He learned the mechanics of developing images along the way. He still remembers the smell of the chemicals in the dark room and how his fingers were left stained and dirty.

But that great shot was worth it. He recalls when he was the only photographer to capture an iconic image of legendary Mayor Richard J. Daley.

Daley had been sick for a couple of months with heart issues.

"Nobody could get pictures; they had people from all over the world trying to get pictures of him at his house in Grand Beach, Michigan," he said. "So my boss asked me to go, and he had already sent five different photographers to try and get these pictures."

Cox and a reporter hopped into his Volkswagen and drove out to Daley's lake house but found guards posted to keep the press away.

The two ended up paying one of Daley's former bodyguards five dollars to take them out on his boat to see what the house looked like from the shoreline. When they returned to the shore, they decided to return at 5 a.m. to sneak around.

Walking around in the early morning, Cox and the reporter made their way over hills, where they found Daley sitting in a room reading the paper  facing a large window.

"(I) made a few shots like that, then he came out and he's walking around, I got a couple of shots of that," Cox said. "Then he goes back in the house and he sits down again, and comes out and tells his bodyguard, 'They're up there.'"

With a laugh, Cox recalls the bodyguards chasing them over the hills.

"If they catch me, they're going to get this film," he said.

As Cox and the reporter ran, he started winding up the film in his two cameras and shoved them into his shorts. He reloaded a new roll and randomly snapped photos hoping to fool them into thinking they had the images of Daley. In the end, he need not have worried.

"They never did catch us," he said. "Because after a certain length of going up and down those hills those guys were tired. I was still just a youngster, so I could do all that."

Cox called his boss back in Chicago, thinking he didn't have anything worth all the trouble. He said he didn't have much — some images of Daley reading the paper and talking to his bodyguard.

With the colorful language editors are known for, Cox said his boss told him to get back with the film and to make it fast.

"He grabbed that film, he wouldn't even let me touch my own film, and he sent a guy in there to process it," he said. "Because everybody had been trying to get pictures of this guy and I'm the only one who got the pictures of him."

The Chicago American folded in 1974, and Cox was among three of its 27 photographer retained by the Tribune after it took over. Cox continued to work in Chicago, covering the streets, sports and government.

In 1988, Cox went to Washington, where he took photos of key political figures and events. Cox and his wife, Deborah, were happy to get away from the cold Chicago winters.

Cox was in the nation's capital during the Reagan, Bush and Clinton administrations.

He looked back fondly on President George H.W. Bush, who he said was the nicest to photograph. Bush would quit early for the day, as Ronald Reagan did, but he would mix it up with the photographers and talk to them.

"If you know anything about fishing, you get into fishing with him, you were his buddy," he said.

During one of the annual White House Christmas parties where reporters and photographers are invited to attend, Cox said Deborah wanted a photo with the president as he was walking past.

Bush was kind enough to stop and pose, he said. Cox pulled out a small point-and-shoot camera popular at the time.

"And it wouldn't work," he said. "(Bush) said, 'Ernie, come on, you're a photographer, you know how that camera works.' He's embarrassing me in front of all these people."

Cox said he was able to get the photo as Bush waited patiently.

"He was that kind of guy," he said. "He just stood there until I finally got a picture. Normally, they say alright, that's it, and they're gone. Super nice guy."

Cox doesn't regret leaving Washington or the hustle of being in the press.

Lugging his equipment around and constantly moving to get the best angle took a toll on his body. But it was the competition from other photographers that he grew to dislike the most. He remembers two instances that turned into ugly spectacles.

"One of the worst times I had ever seen, and I hated it, I went to California with two reporters and we were covering the Hearst family," he said.

In the 1970s, Patty Hearst was an heiress to the Hearst media empire. She became a national story after being kidnapped by the Symbionese Liberation Army in Berkeley, California.

After a few weeks, she announced she'd joined the group and took part in a bank robbery armed with a machine gun. After 18 months on the run, she was captured and put on trial. When Hearst's parents arrived at the courthouse during the trial, Cox said 25 to 30 photographers and camera people rushed them as they entered the building.

The onslaught of press trying to get a shot ended up knocking the two to the ground, he said.

"I'm standing back, I'm getting a picture of that which was better, I don't want to be in that mob anyway," Cox said. "It was so sickening to see all these cameramen and photographers just knock these people to the ground. I thought that was the worst I've ever seen."

That was until President Bill Clinton and Monica Lewinski.

"The guys were just beating each other up to get a picture of her and they were so close up on her it was like me hugging you," Cox said. "They were that close. I mean, they were just squeezing. Two worst things I'd ever seen."

Luckily for Cox, he had retired in 1997, right before the scandal broke.

"I was so glad I retired because I can't take that," he said. "When I saw all that on TV, I was telling my wife and we just thought it was pathetic."

While Cox may have retired from newspapers, he hasn't given up his life-long passion for photography.

He and his wife have been living in Green Valley for about 21 years, and Cox said he still loves to get out and take photos around his neighborhood and local parks. One of his favorite subjects is open scenery shots and birds in flight.

"I haven't stopped," he said. "I like birds flying more than anything else because I feel that shooting a bird just sitting on something is an everyday shot."

Many of Cox's pictures, both while at the Tribune and today, can be seen on display at the Green Valley Computer Club at GVR's Santa Rita Springs.

"That's my fun, just going out and being there at the right time," he said. "If I want to shoot clouds and things, I'll go out and look at the sky and say, 'Is it time yet?'"