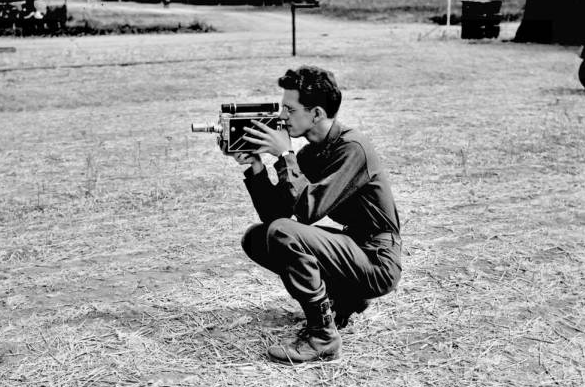 Melvin Shaffer and a Cine Special motion picture camera that he used for filming surgeries and interviews with “shell-shocked” patients. This photo was taken in 1945 at the 8th Evacuation Hospital in Lake Garda, Italy. He was 21. 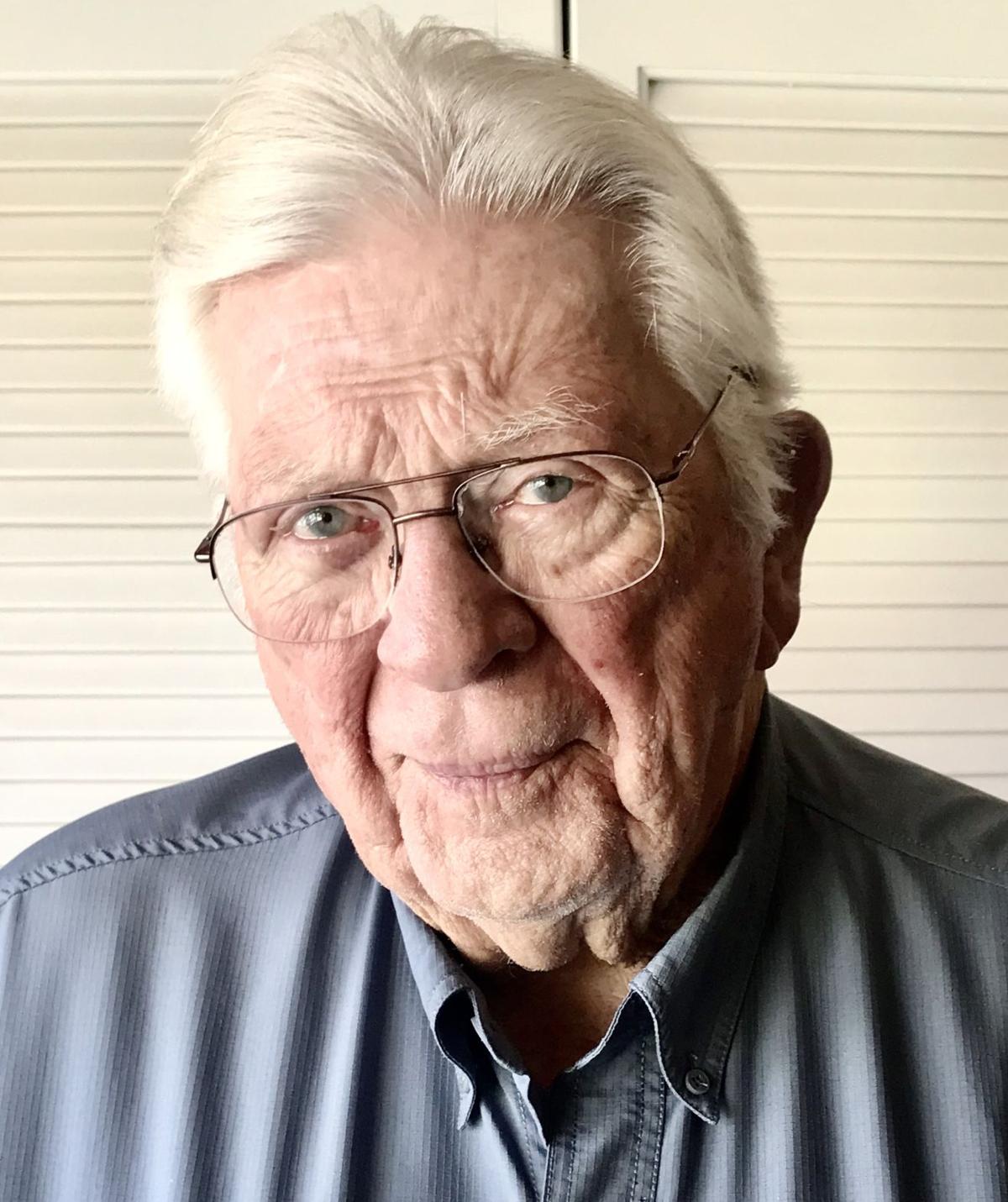 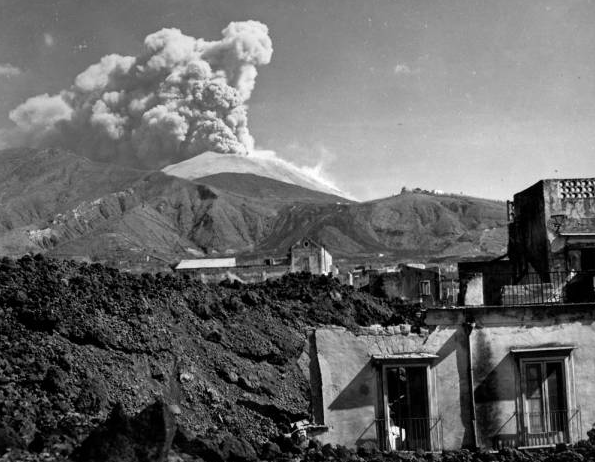 Mt. Vesuvius erupts. According to Shaffer: The Allied forces invaded Italy in September 1943. This was followed in March, 1944 by a massive eruption of Mt. Vesuvius. Lava flowed for days and covered many villages and farms to the northwest from the ancient ruins of Pompeii. At least the 1944 eruption produced a traditional lava flow, which could be detected and provided opportunity for escape. This photograph shows lava flow the day after a major run in the village of San Sebastiano al Vesuvio. 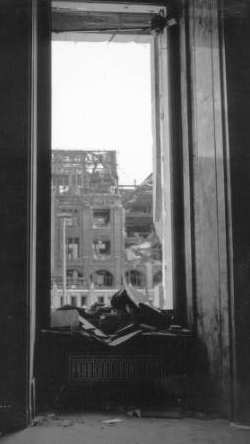 From Melvin Shaffer: "This view I call the 'Hitler Door' because it is at the rear of the Chancellery (in Berlin) and is the one through which you went before going down into the underground headquarters. Out and to the left was the courtyard wherein the cremation of Hitler took place."

Imagine having enough material to tell your life story by the time you turned 21.

Melvin Shaffer’s one of those guys, and he put it all together in a recently published book titled “From Anderson’s Holler,” put out by Southern Methodist University.

At 96, Shaffer’s being prodded to tell “the rest of the story,” and is already working on it.

For now, his first two decades are more than enough to hold our attention. They are a window into life in one of rural America’s most impoverished areas and the story of a 19-year-old kid quickly and unexpectedly pushed into a unique role during World War II.

All because he had a knack for cameras.

Melvin C. Shaffer was born in 1924, and brought up in rural West Virginia during the Depression. Coal and oil were king, and nobody complained because it put food on the table.

His earliest memory was of his dad hearing the news in May 1927, that Charles Lindbergh had flown non-stop from New York to Paris. Shaffer had just turned 3.

The next year, he remembers his dad throwing a chunk of coal through the front window after learning Herbert Hoover had been elected president.

Life was austere, but a lot of that was lost on Shaffer.

“I never knew that the Depression was on when I was a kid. There was evidence of it, but I didn’t know,” he says.

His father always had the same job and earned a comfortable $125 a month, more than enough to make ends meet.

They lived on a farm, which was essentially self-sufficient, and spent their days working and playing —pig bladders made fine basketballs and the Sears Roebuck catalog was prized for glimpses of girls in their unmentionables.

He saw others around him struggling, “but as a kid, that didn’t make sense to me.”

School came easy for Shaffer; he loved science and figuring out how things worked. He grants the teachers in his hometown of Shinnston, W.V., weren’t the sharpest but they knew enough to unleash a kid who was hungry to learn.

His grandmother sparked his interest in photography when she gave him a clunky camera she’d found in her attic. His spent hours figuring it out and experimenting, and in his sophomore and junior years of high school he presented papers on photography to the West Virginia Science Academy, the latter on photo manipulation. He won blue ribbons each time.

In the crowd for both presentations was a doctor who invited 16-year-old Shaffer to finish high school in nearby Philippi while working toward becoming a clinical photographer. He jumped at it and left home for good.

Not long after, he met and married Edith, much to the chagrin of his parents and to the joy of hers. He was 18, she was 20.

During all the changes in his life there remained one constant: War was in the air.

“We weren’t naive and we had watched Hitler in Germany,” he says. “Nazism was not anything new when it finally blew out to be what we now know it to be.”

Shaffer knew he’d have to go sooner or later. He went sooner — right before he was drafted — and was trained as an Army medic. Then his photography experience paid off.

He and a small group of men were tapped to record the medical history of World War II. The idea was that their work would accompany research papers on the treatment of battle casualties and drive the introduction and perfection of new drugs.

Each man was given a list of 300 images to capture, very little direction and were set loose in summer 1943. They were called the MAMAs — Museum and Medical Arts Service.

In short order, the boy from West Virginia found himself in Morocco. The adventure was underway.

The MAMAs were given free reign and Shaffer recognized that it was a privilege. Ships, planes and jeeps (he trashed a couple) were at his disposal if he could beg his way aboard.

Soon after arriving in North Africa, he found himself crossing the desert with a group of Bedouins headed for the Algeria/Chad border. After 45 days, he’d lost 20 pounds, “was brown as an Arab,” and had a run-in with a python.

Soon, he was headed to a base outside of Naples, Italy, built on what was to have been the site of Mussolini’s aborted 1942 World’s Fair, a celebration of fascism.

He wasn’t there much — maybe two weeks in two and a half years — because Shaffer was never content to just shoot photos of medical procedures.

“There was a difference, a big difference, in what I did and what the seven other MAMAs photographers all over the world did,” he says.

Life was not uneventful.

Shaffer took a trip as a passenger in a one-man P-38 (very uncomfortable, about six hours round-trip); cajoled a pilot into landing behind German lines to retrieve a camera he’d dropped from 100 feet (he survived, so did the camera); and ditched a two-ton military vehicle to avoid getting killed when Mount Vesuvius erupted in March 1944.

He also occasionally found himself in combat, glad he was a trained medic.

“Sometimes you know ahead of time you were going to do something very dangerous but you didn’t think about it,” he says.

Unusual as it sounds, the war gave Shaffer an introduction to some big names.

He photographed Winston Churchill during a Signal Corps assignment (the dry British leader mumbled, “Just one photo now.”) He’s pretty sure it was future Soviet leader Nikita Khrushchev he met at an airfield in Ukraine; is nearly as certain he meet entertainer (and French Resistance agent) Josephine Baker on a Paris street corner; and is darned sure that was Marlene Dietrich’s leg sticking out of a jeep in a USO caravan outside of Rome.

He just missed meeting novelist Gertrude Stein, who was close to a couple of women he’d befriended near Florence, Italy. (“They were motherly to us and gave us all sorts of information on how they made it through the war and avoided the Nazis.”)

But one of the biggest impressions came at a German orphanage between Nuremberg and Dachau.

Shaffer says there were about 200 children, ages 1 to 12 years old.

“They were sitting at a table with a plate in front of them and a fork and absolutely nothing to eat.”

He believes they were acting as though they were sitting down to a meal just “to relieve their anguish.”

There was a man off to the side, slivering every bit of meat he could off an animal bone.

“I stopped in front of her and she thought I was going to do something, take her plate, and she snarled at me,” he said, hissing like a cat or a wild animal, clutching her plate to her chest. It left an impression.

The Americans emptied their pockets and supply boxes of anything edible, then organized a convoy of U.S. military volunteers to come in.

Later, he would photograph the horror at Dachau concentration, nearly losing his own life when a small plane he was aboard clipped wings with another plane. The two in the other plane didn’t make it.

Not long after, he found himself in the bunker where Hitler killed himself.

“…I felt as though I had been to the center of evil,” Shaffer wrote in his book.

“There was an overwhelming stench of gas and bodies rotting and burned debris. I walked across it to claim that I walked on Hitler’s body.”

He went on to a distinguished, 37-year career in biomedical communications at the Medical College of Virginia, and retired to Green Valley. He and Edith were married 64 years; she died in 2007.

“My life after the war was far more adventuresome and dramatic than my life during the war,” he says — that’s the book he’s working on. He consulted with the World Health Organization, the Pan American Health Organization and other groups, traveling to medical schools and institutes in 85 countries. But it all started with the war.

“Every soldier has different experiences,” he says. “Not every soldier was capable of understanding the value of the experience they were experiencing. I think, for whatever reason, I was blessed by being able to do that. To a certain degree, I knew what it was all about.”

•Shaffer’s war photos have been donated to SMU and can be found at: https://bit.ly/3etfBDd.