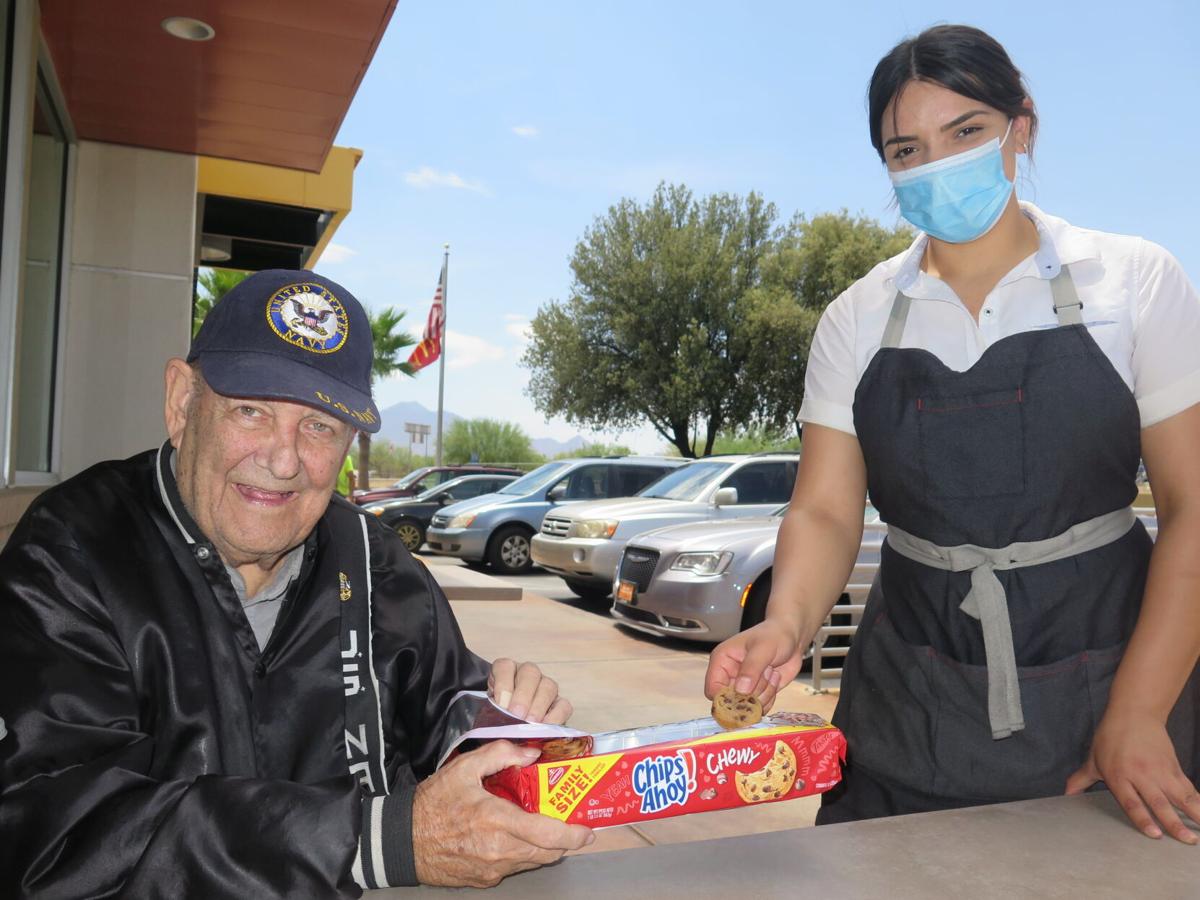 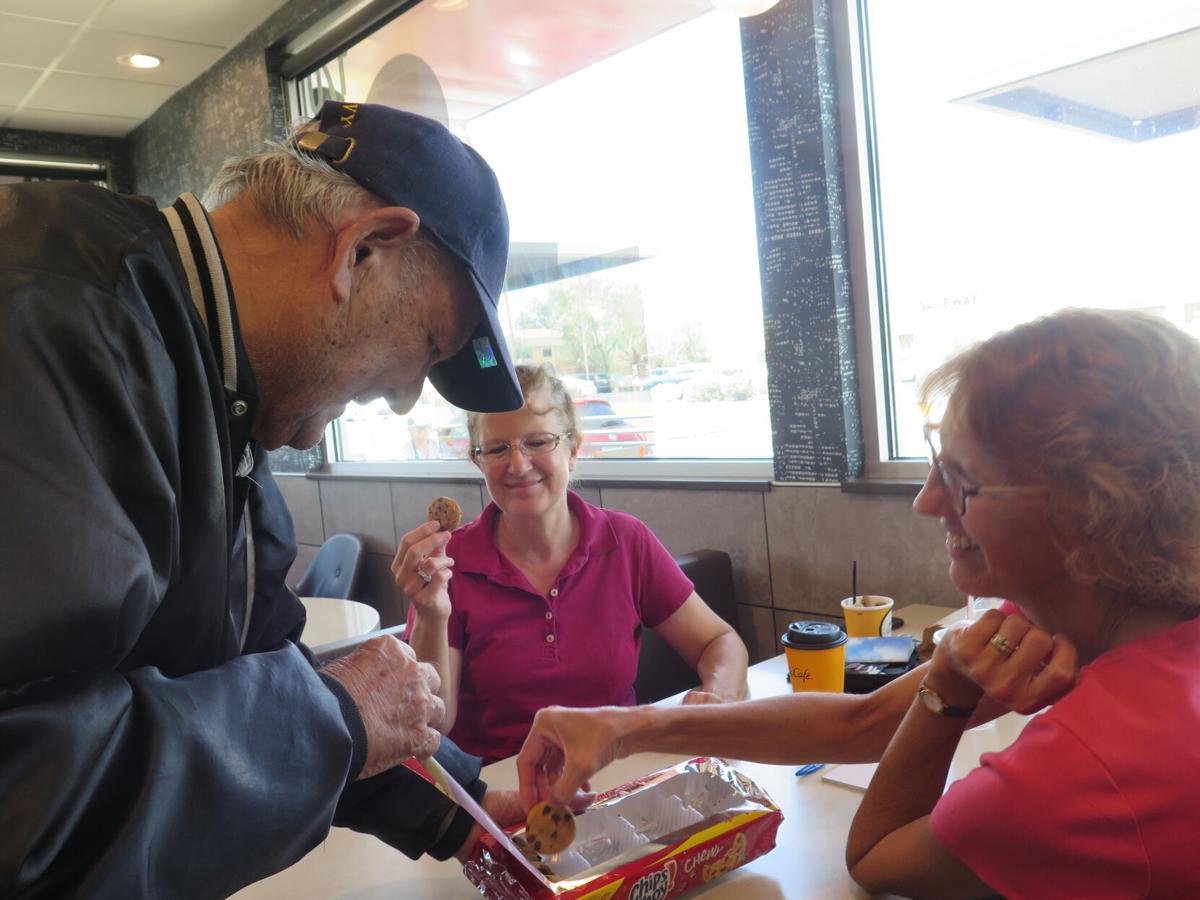 Elinor Galvan and Karen Polk accept a cookie from Richardson. 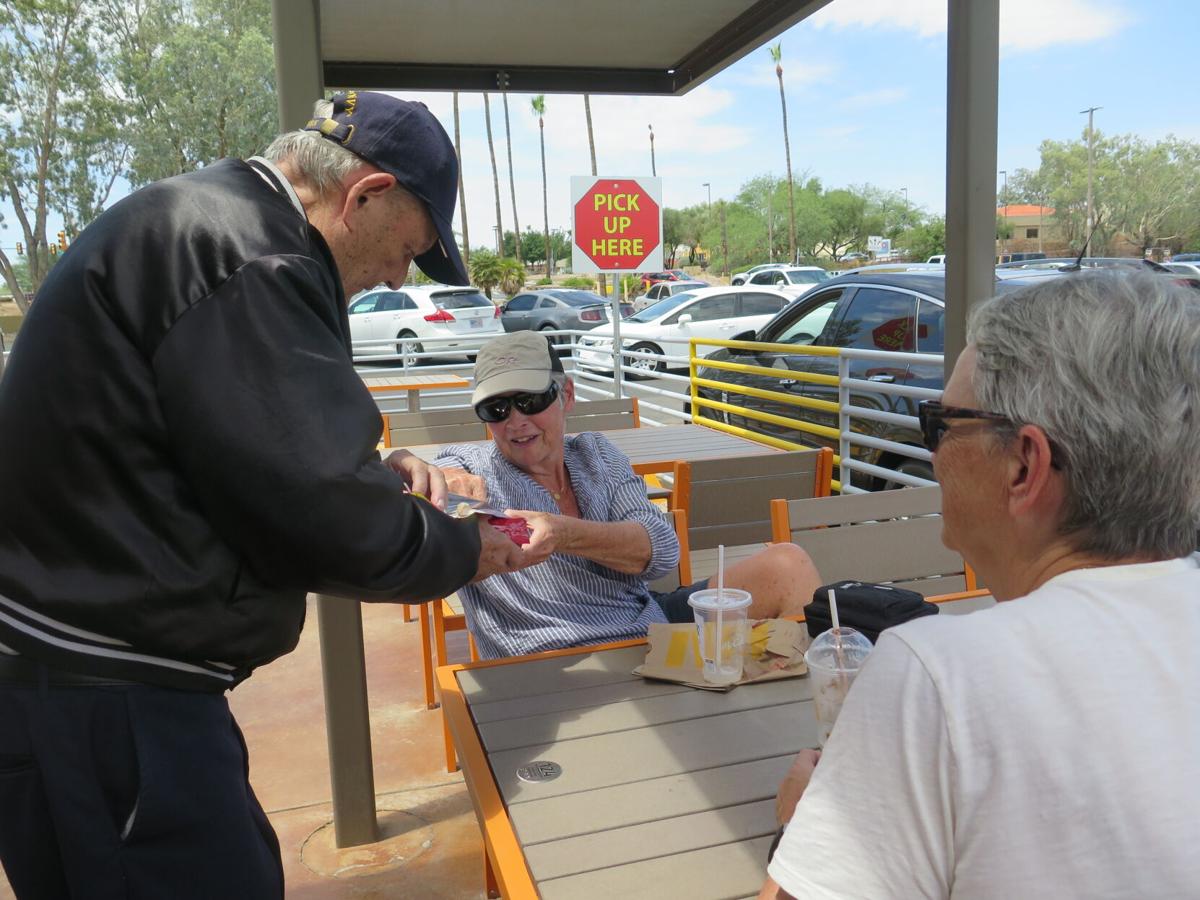 Heather Whitehead accepts a cookie from Jim Richardson and then Peggy Layton takes one, too.

Elinor Galvan and Karen Polk accept a cookie from Richardson.

Heather Whitehead accepts a cookie from Jim Richardson and then Peggy Layton takes one, too.

Jim Richardson was looking to fill a void in his life after his wife passed away three months ago. He needed someplace to go and something to do.

Richardson, 78, ended up turning his loneliness into an opportunity to put a smile on somebody’s face.

You can find him at the McDonald’s at Continental Shopping Plaza four or five days a week offering a treat that’s not on the menu—Chewy Nabisco Chips Ahoy cookies.

Cookies for free. Just because. He offers them to guests inside or on the patio and chose the brand because they’re soft.

“I started because I had nothing to do,” he said. “I give a package to the staff and then offer cookies to people while they’re eating. About half accept. Some will say, ‘No, thank you,’ and I understand. People are weight conscious.”

He always asks parents before offering a cookie to their children and understands when they decline.

“I don’t mind people saying no and I don’t question no,” Richardson said.

“Smiles. Especially from kids. They know when they see something good to eat. Even people who say ‘no’ smile,” he said.

When Richardson approached Peggy Layton and Heather Whitehead at their table on the patio both happily accepted a cookie, thanked him and enjoyed some brief banter. Inside, Elinor Galvan and Karen Polk also took a cookie and were appreciative.

As employee Alondra Medina was returning from delivering an order to a customer on the patio, Richardson offered her a cookie and she took one, thanking him for the treat.

Since Richardson’s cookie generosity is something different, employee Arturo Guzman said he was surprised and described offering the free sweets as “very kindly.”

Some employees have taken to looking after Richardson in their own way, and get concerned when he doesn’t show up some afternoons.

Manager Deissy Avalos said Richardson always brings cookies for the employees and will talk a bit.

“He talks about his life and is very nice. We have no problems with him giving out cookies here.”

As a guest at McDonald’s, Richardson always order two sausage McMuffins and a drink, enjoying one sandwich after handing out cookies and taking the other home to reheat for dinner.

Richardson is a former fire captain in Mason County, Washington, and is quite at ease talking to people. He also retains some of his former work habits.

“When I see someone fall and people start to get up to help, I yell ‘freeze,’ because the person shouldn’t be moved. Then I explain why,” he said.

He also wears his U.S. Navy cap, prompting a lot of McDonald’s customers to thank him for his service.