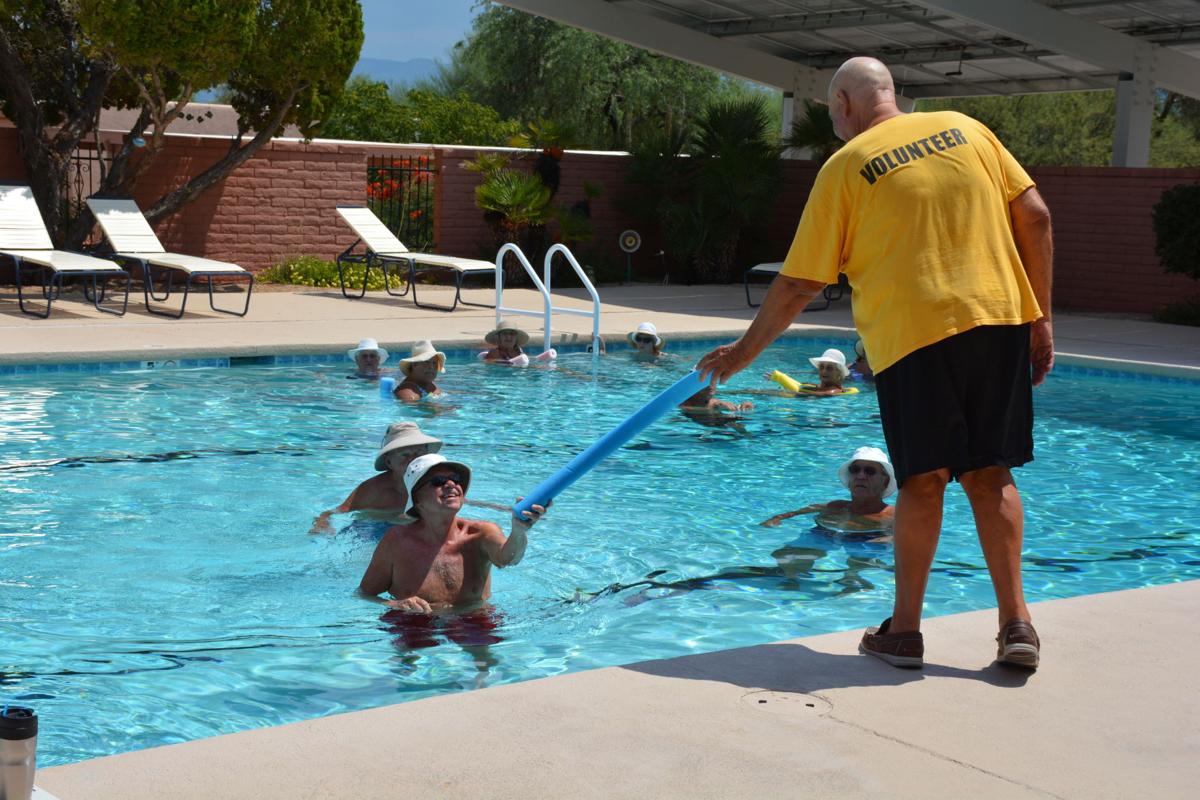 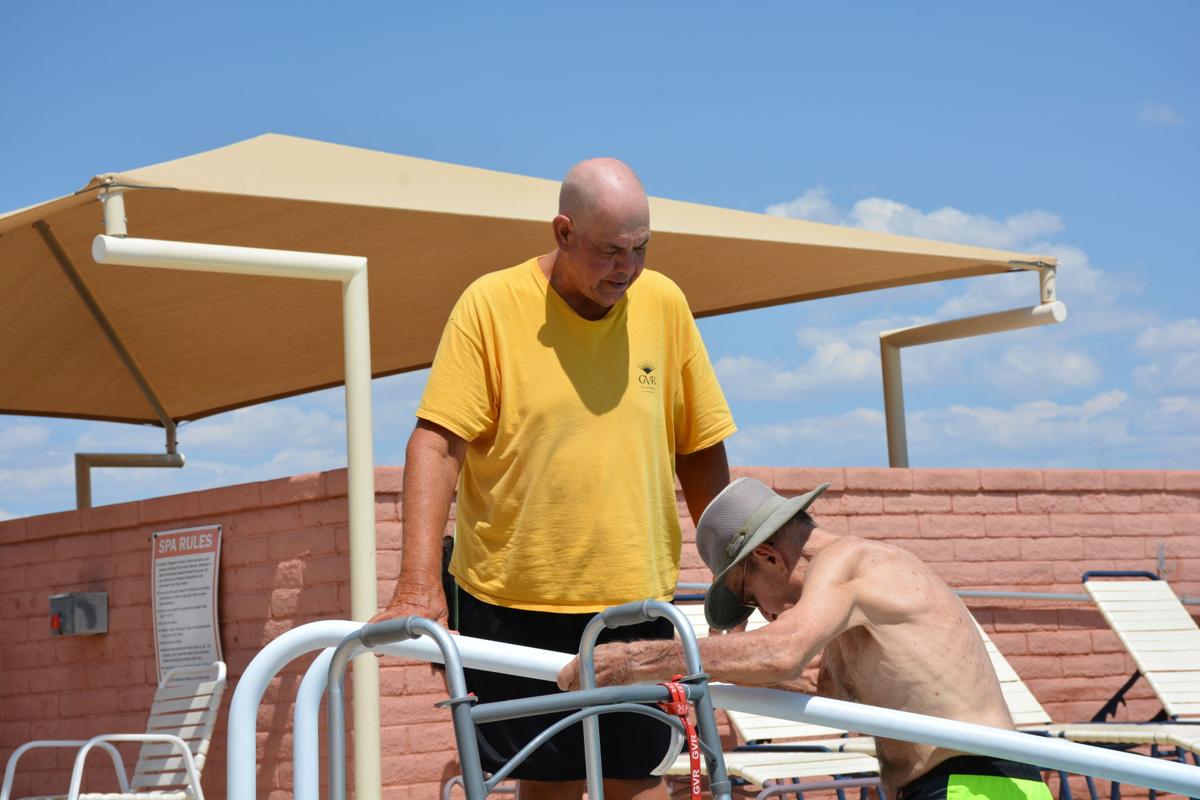 Ron Larson stands by as Richard Lindstrom eases into the pool at Casa Palomas II. Larson has been a volunteer for more than 20 years, but pools and fitness centers volunteers are in decline. 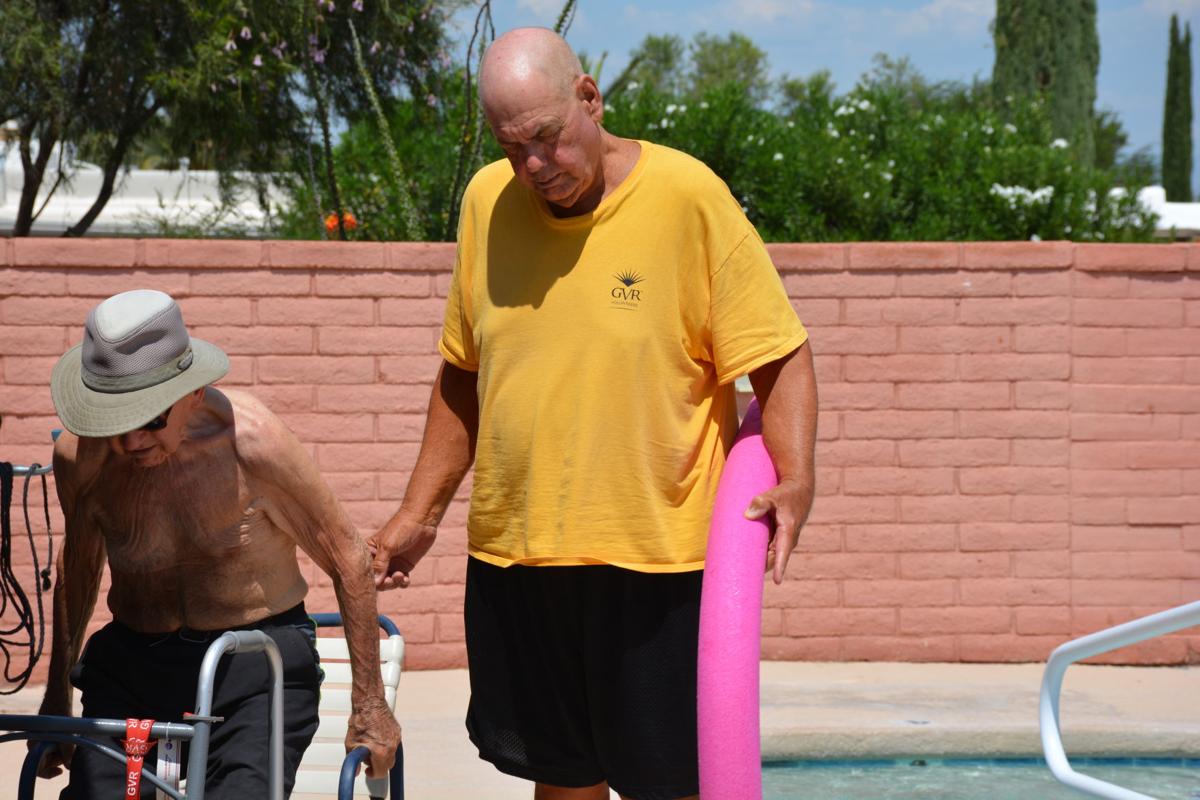 Richard Lindstrom, left, gets a hand from Ron Larson who has been a volunteer at Casa Palomas II for more than 20 years.

Ron Larson stands by as Richard Lindstrom eases into the pool at Casa Palomas II. Larson has been a volunteer for more than 20 years, but pools and fitness centers volunteers are in decline.

Richard Lindstrom, left, gets a hand from Ron Larson who has been a volunteer at Casa Palomas II for more than 20 years.

From governance to recreation, volunteers at Green Valley Recreation are getting in quality socialization time while helping the organization move forward.

Volunteering may be big in Green Valley, but the dynamics are changing and it has lead to a shift with some areas falling shorter than others.

GVR's coordinator of volunteer programs, Maureen McCarthy, said the shift has been with younger generation volunteers moving from doing jobs which solely provide labor to wanting to make a change or have a voice in policy.

With 13 facilities, around 100 staff members and operating hours from 5:30 a.m. to 9 p.m., the 2,801 volunteers make up a vital part of keeping clubs, programs, events, governance and facilities functioning.

"We consider volunteering as a program in and of itself because people get a lot out of volunteering," McCarthy said. "We try to provide the opportunity for people to contribute and help us provide as many activities as we can at the lowest possible price at GVR by at least having the clubs manage themselves. Also it's an opportunity for people to be engaged in the community and be a part of a bigger something rather than sitting at home with the remote."

There are two major groups of volunteers — service and governance. Of the 2,801 volunteers about 10 percent, or 293, are volunteering in governance — the Board of Directors and committees for example. The remaining 90 percent belong to the service side which includes programs, events and facilities like fitness centers and pools.

McCarthy said she believes there are generational differences in volunteerism. Older generations of volunteers approached volunteerism with a different purpose in mind. Where they tended to take care of what needed to be done, regardless of what it was, younger generations are more inclined to volunteer if they believe they are having a major impact. As a result, there has been a decrease in volunteers in two major areas which members are likely to frequent — pools and fitness centers.

"It's a huge decrease from when I started because (volunteers) were on a program where they earned incentive points (and) could get up to 25 percent off their dues and they also got gift cards," McCarthy said. "And that was because all the other volunteers get something out of it, but the pool and fitness centers don't."

The program ended eight years ago and isn't allowed to be reinstated due to laws which don't allow volunteers to be compensated because they'd be considered employed and would have to be paid minimum wage, she said.

And while it may seem like it was the loss of the incentive program alone that caused the drop in volunteers at pools and fitness centers, McCarthy said many of those incentive points went unused and it was actually the generational difference between the World War II era retirees who filled those positions and younger retirees.

The traditional volunteers from the WWII era also differed because they tended to be fully retired with pensions whereas it is more common today with baby boomers to be semi-retired people who still have part-time jobs and want to be compensated for their work, McCarthy said.

"This is going on globally," she said. "This is happening everywhere. The older volunteers that were the traditional ones who considered themselves free labor, they're literally aging out, they're dying, they're going into assisted living, they're moving back to be closer to their kids. It's been a slow attrition."

People may not want to volunteer for a job if they're not changing policy, making a grand contribution to society or where they feel they are simply free labor, but there is one major benefit many may over look — getting out of the house and socializing.

"We just had a seminar on how volunteering is good for your health," McCarthy said. "People live longer that volunteer, they're healthier, they take better care of themselves, they are engaged in the community, they are not depressed or they don't feel isolated. They have a group of people who they have something in common with that they work with."

This aspect isn't lost on Ron Larson, who has been a volunteer monitor at the Casa Paloma II swimming pool for decades. Larson has been an official monitor at the pool for the last 20 years, but even before then he was a substitute when he'd come to Green Valley where his mother lived.

Larson still puts in three hours per day, seven days per week with the only days off coming during lightning storms which closes the pool.

With a big smile, Larson sits at his table with a monitor sign and his yellow GVR volunteer shirt and looks on the pool with everyone in it. He waves and knows them all by name. It's not just a volunteer shift, but three hours per day Larson spends outside with people who have become friends.

"Love of swimming, love of socializing, the climate," Larson said are reasons he keeps coming back. "I'm from Buffalo, New York, snow country and when I visited my mother here I knew this is where I wanted to be. You can swim year-round, unless there's lightning, you can swim everyday."

Love of the people in addition to swimming also keeps Larson returning to the monitor station seven day per week, he said.

And while Larson and other volunteers at the pools and fitness centers have a job to do, it's not all work and no play. Larson does get in the pool and enjoy conversations with the other regulars during his noon to 3 p.m. shift. And although Larson isn't changing policy, but he is getting something out of the time he spends volunteering at the pool.

"Definitely," Larson said. "I hate to say it, but it's like a way of life. I mean it's the same with the people that monitor the weight rooms, they help people there, or people who monitor the pickleball courts or wherever they do their monitoring. And here it's not only love of the pool and all that, it's just being here with the people, socializing and exercising."