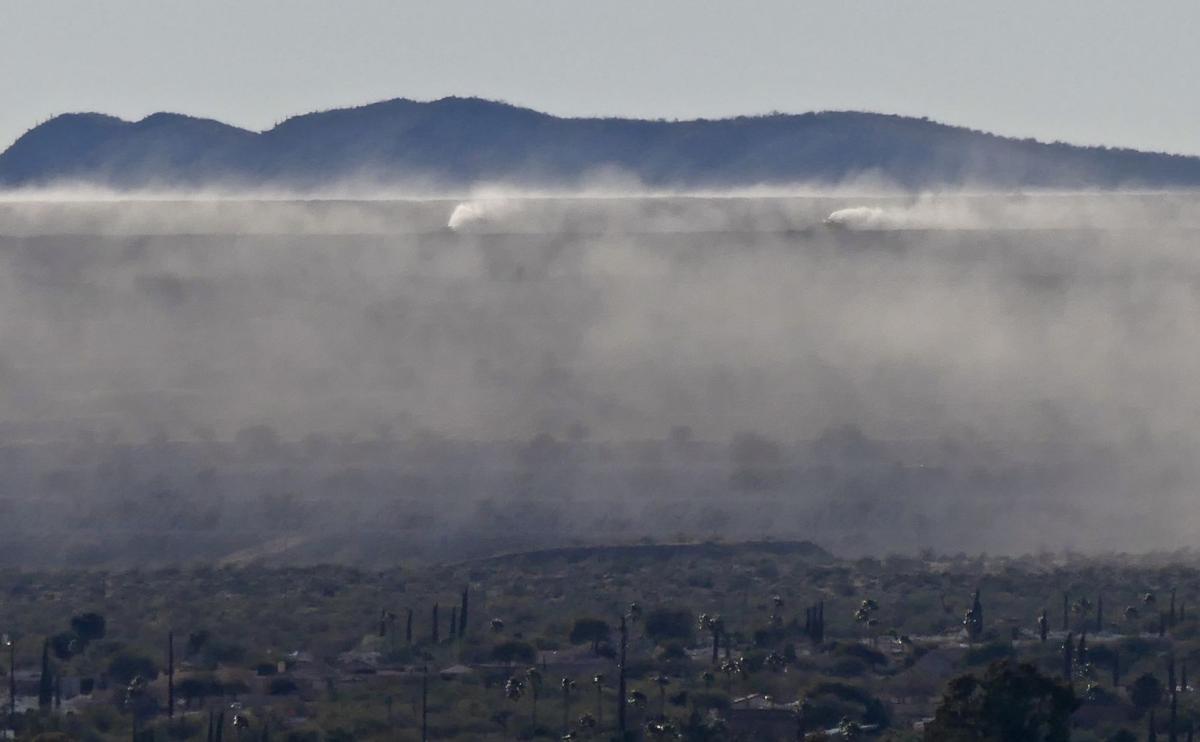 Two trucks spray down the Sierrita Mine over Green Valley on Thursday as dust blows particles into the air. 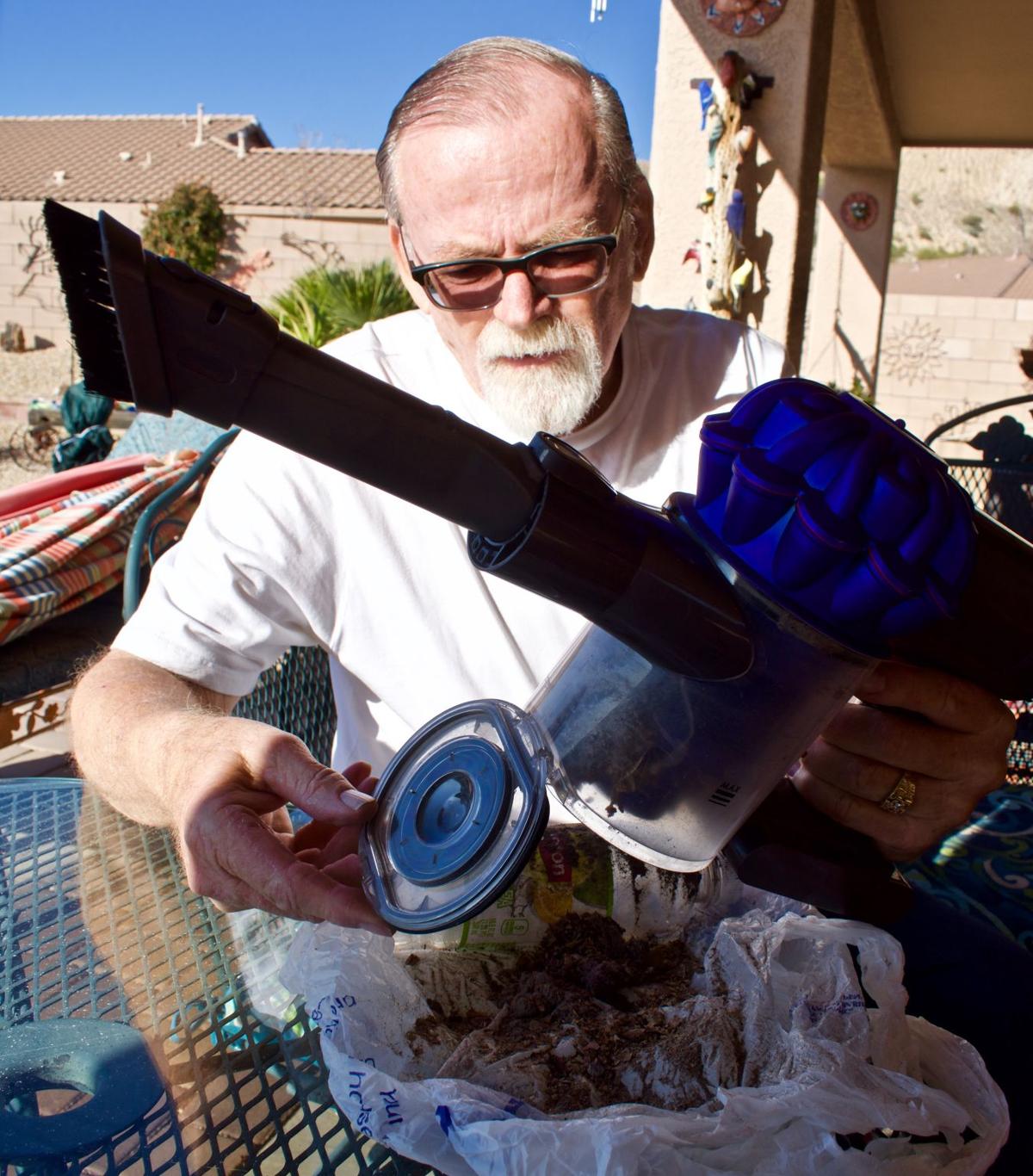 Green Valley resident Dan Curran shakes out a small vacuum he used inside his house following a dust storm Thursday.

Buy Now
Stay Informed. Subscribe For Only $1.99 Per Week

Two trucks spray down the Sierrita Mine over Green Valley on Thursday as dust blows particles into the air.

Green Valley resident Dan Curran shakes out a small vacuum he used inside his house following a dust storm Thursday.

It's going to be a while before Green Valley residents know whether mine dust that came off the Sierrita Mine on Thursday amounted to a violation.

Dust wafted off the mine Thursday as the wind kicked up around noon.

Beth Gorman, a spokeswoman with the Pima County Department of Environmental Quality, said a DEQ inspector who happened to be in the area saw the dust and headed to Freeport McMoRan's Sierrita Mine.

The inspector stayed several hours to interview staff and obtain opacity readings. Visible emissions from the mine are not supposed to exceed 20 percent, but Freeport exceeded that limit several times in September, October and November 2018. At one point, it reached 63 percent opacity. The mine paid a $230,000 fine in the incident.

"On January 9, Freeport-McMoRan Sierrita mining operations experienced sustained winds of more than 25 mph, with wind gusts exceeding 48 mph. These weather conditions caused a dust event. We reacted quickly by applying dust suppressant to the tailings impoundment using all-track vehicles, water trucks and manual application where equipment could not access. Representatives from the Pima County Department of Environmental Quality were on site during the event reviewing our actions. The company reported the event to PDEQ via phone as required on January 9 and will submit the written report to PDEQ within the required timeframe."

She said anybody affected should contact the Sierrita Operations 24-Hour Community Information Line at 520-393-4426. A National Weather Service meteorologist said Thursday that they have a limited number of gauges in the area and they recorded wind gusts of about 20 mph.

As a result of the 2018 violations, Freeport McMoran agreed in July to contribute $200,000 to build a two-mile walking path at Green Valley's new county park as part of a settlement reached over several mine dust violations in 2018. The mining company also paid a $30,000 civil penalty.

On Friday, Gorman said the inspector was writing up an inspection report and gathering data and logging evidence.

"After all that process is complete, management will thoroughly review, make any necessary requests to Freeport staff for documents such as tailings maintenance records and other types of reports," Gorman wrote in an email. "Meetings may occur with Freeport staff for them to explain actions that were taken leading up to the wind event, etc."

She said permit compliance decisions are made only after thorough review of all the evidence in the case and "it will be a while."

Bill Nocki, who moved to the Desert Creek community off Duval Mine Road 17 years ago, said Thursday's event wasn't as bad as 2018, but he's even more concerned. He underwent a double lung transplant in October because of lung disease and emphysema. He wears a mask everywhere – except his home, which he thought was his "safe zone."

"I'm going to talk to my doctors to see if they have any research on mine dust," Nocki said. "I don't know what I'm going to do. I hate to say I have to move, but here I am sitting with brand new lungs and I'd hate for them to be damaged."

Nocki said he doesn't understand why this keeps happening.

"They say they have a watering system, but it doesn't seem like it's working," Nocki said. "And it's clear the magnesium (chloride) isn't holding it down either. They know this is going to happen, why don't they plan for it?"

This time, they plan to take full advantage if Freeport offers to assist residents again. They said they had a fine layer of dust over their entire patio, floors and other surfaces in their home Thursday.

"When I saw the swirl coming at us (Thursday), I thought, 'Oh boy, here we go again,'" Dan Curran said.

He said ever since he moved to Green Valley from California he's suffered from respiratory issues. He has a persistent cough and stuffy head, despite the fact he and his wife run filters inside their home constantly and routinely dust and vacuum. They have to replace rugs every six months because of the dust and they've gotten rid of a lot of their knickknacks so they don't have to dust them, Jessica Curran said.

Dan Curran said he plans to offer Freeport a deal — they can buy his house or put up with his nagging.

"When this happened the last time I thought there was a fire back there," Dan Curran said. "I went and drove all the way back there and found out it was dust."

When Pima County issued Notices of Violation to Freeport in 2018, David Rhoades, general manager of Freeport's Sierrita operation, responded with nearly identical letters. In each, he explained that wetting the tailings dam with water and magnesium chloride have “largely proven effective,” but because of the size of the dam, weather conditions and high wind events can overwhelm those measures.

To report concerns about mine dust, call: