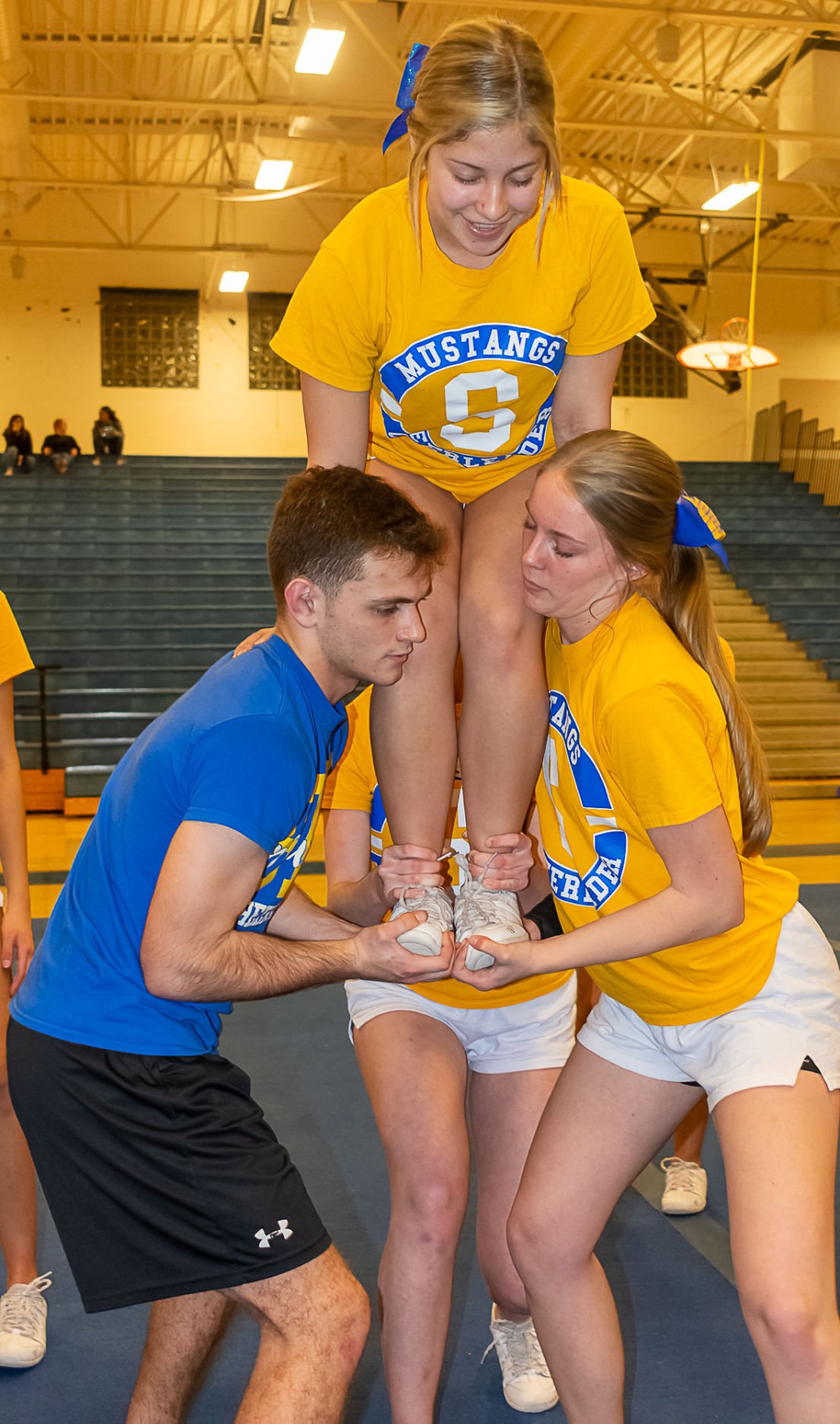 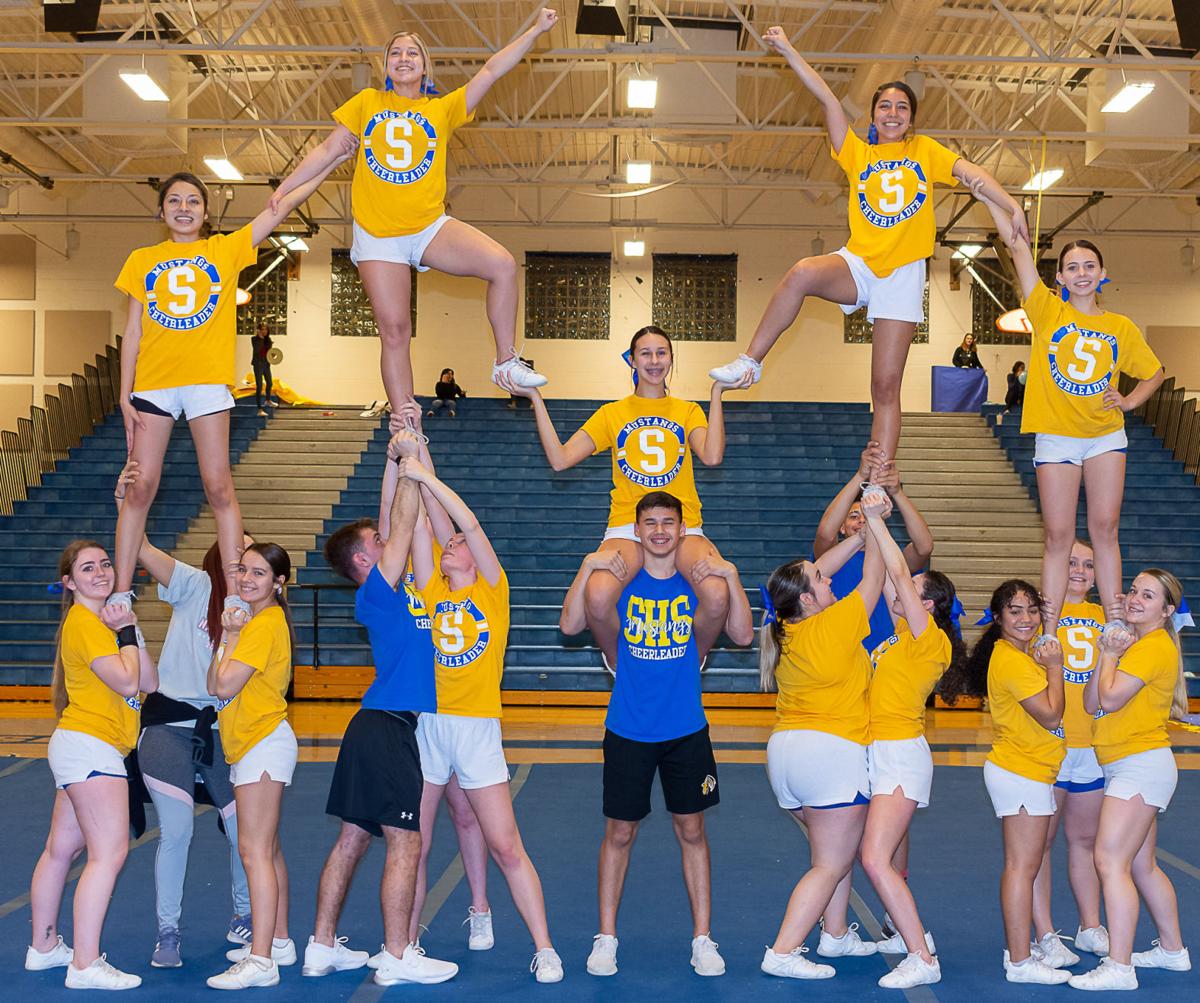 When Sahuarita High School football players Bryce Williams and Aramis Alvarado decided to try out for a new sport after their season ended they knew they might get some funny looks.

Nowadays, instead of protecting their quarterback or running for touchdowns, the two young men are throwing young ladies into the air and performing other stunts as part of the Mustangs' cheerleading squad.

In fact, this weekend the two teenagers and the rest of the squad are heading to Phoenix to compete in the Arizona State Cheerleading/Pom Tournament.

Because Williams, Alvarado and SHS wide receiver Eric Reida joined the team this year, the Mustangs will be able to compete in the co-ed show cheer division for the first time in years, said Marie Williams, who coaches the team along with head coach Danielle Elmore.

With just junior Chase Kinsman on the team, the squad would only have been able to compete in the regular cheer division, Marie Williams said.

Having four boys on the team means their routines have more "pizzaz," said junior Emily Gallego, 17.

"Having the boys on the team makes it more fun; there are a lot more tricks we can try to do with them," she said.

Gallego said she's been impressed with just how seriously the boys are taking their new roles. They not only work hard to get their routines down, they are also diligent about following all of the safety precautions, she said.

Some of the girls are now being thrown as high as 12 feet in the air and they don't wear any of the padding that other athletes wear, Gallego said.

Bryce Williams thought he knew what he was getting into. Marie is his mom and she's been coaching cheerleaders for about 10 years, and his sister, Alexzandrea, is a captain on the squad.

As it turns out, the sport is a lot harder than the 18-year-old thought. He's using muscles he doesn't use during football or while wrestling. At just 150 pounds, he's tossing girls in the air who are between 100 and 125 pounds.

Up until this week, when his wrestling season ended, Williams has been wrestling and cheerleading at the same time. Every day, he'd head straight to wrestling practice right after school and then he'd run over to cheerleading practice.

"I just wanted a challenge, something else that I could do ... I felt like changing something up this year," he said. "It's my last year and I just wanted to go all out."

Alvarado, a sophomore, decided to try out for the team after watching his girlfriend cheer.

"I was just a little bit intrigued," he said. "I was intrigued with the ability to know your strength and to lift girls in the air. I thought it was pretty cool."

Neither boy has received any flak for their decision to join the team. However, neither one would care if they had.

"I didn't have any fears about it. I didn't really care about what anybody said," Williams said. "I'm just that kind of person that doesn't dwell on negativity. The people who give you that positivity and encourage you are the people you want to be around."

Alvarado said his mom thought it was "pretty cool" when he told her his intentions, and his friends have been supportive, too.

"I hang around a lot of good people," he said.

Although Bryce Williams said he thinks the team will do well this weekend, thanks to a few tricks up their sleeves, he does have a case of nerves.

"It's similar, but maybe worse than what I'd get for football or wrestling because I've gone through football games and wrestling matches," he said.  "These cheer nerves are very different because it's the first time ever doing it."

Marie Williams said that while she's pleased the squad can do more stunts now, she is excited to have more boys on the team for another reason.

"It sends the message that it's OK for boys to be cheerleaders," she said.