Welcome, Guest
Stay Informed. Subscribe For Only $1.99 Per Week

The 2020 race for Pima County sheriff is looking a lot like the 2016 race: No-holds barred.

The only difference is that this time around, Republican Mark Napier is the incumbent and former Sheriff Chris Nanos, a Democrat, is the challenger.

The two have been involved in a back-and-forth almost since a billboard showed up across from Sheriff's headquarters in early December that read, "We need a new leader. We need Nanos.”

It wasn't long before Nanos, who'd declared three years earlier that he was done with public office, threw his hat in the ring.

Since then, and especially after Nanos won a contentious Democratic primary against Kevin Kubitskey on Aug. 4, the two have been on each other in interviews, social media and now, possibly in the courts.

Napier took the latest swing Monday when he held a press conference and sent out a list of demands to Nanos — including one to “strongly consider” ending his campaign. In a phone interview after the press conference, Nanos did not appear eager to comply.

Napier alleges Nanos’ campaign has “not merely stretched the truth” but has “intentionally, and with actual malice, disseminated complete falsehoods and defamatory statements” about him through a Facebook page called No More Napier, in newspaper advertisements and on a billboard.

Napier said the “most egregious falsehood” was the billboard near I-19 and I-10 that had Napier on one side with a Pinocchio-like nose and Nanos on the opposite side with the headline "proven liar...vs. proven leader"’ and claimed, “The Law Enforcement Merit System Council found Napier guilty of perjury. He is appealing.”

The billboard referred to a claim Mike Hellon, a member of the LEMSC, made in January that Napier and other command staff had committed perjury during a council investigation involving a lieutenant in the sheriff’s department. The lieutenant was suspended by Napier for three days without pay after he hung a letter of reprimand in his office and refused Napier’s order to take it down. The council overturned the lieutenant’s suspension and found it was made without cause.

In February, Napier called on the County Attorney’s Office to investigate whether he and other commanders had lied during the council’s investigation. County Attorney Barbara LaWall recused herself and a special committee, known as the Rule 15.1 Committee, conducted an analysis as did a similar committee out of Pinal County. In April, Chief Deputy Amelia Craig Cramer reported neither committee found evidence Napier or other command staff lied. The report said Hellon did not, “ask the council to make an official finding, determination or ruling that the officers were dishonest.”

Napier included Cramer’s report in a packet of documents attached to his demand letter to Nanos. The packet also included a letter from Clear Channel Outdoor, the billboard company, to Napier that said, “While we respectfully do not agree with all of the statements in your letter directed towards Clear Channel...[the Nanos for Sheriff organization] did not meet...advertising standards and was inadvertently posted. We apologize for that.” 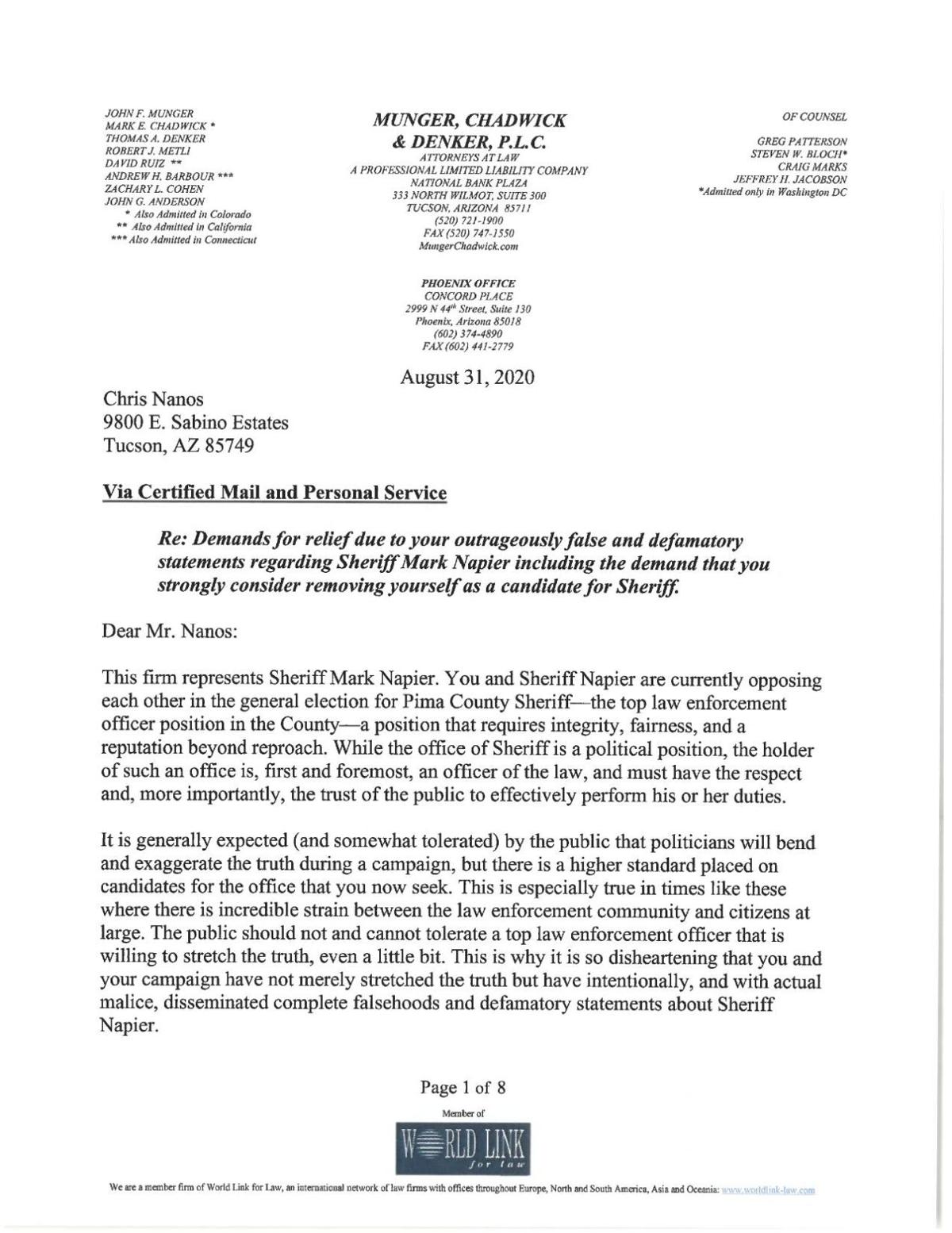 The billboard was taken down within four days of going up, according to the Clear Channel letter. It doesn't say when the billboard went up.

On Monday, Nanos said he had received Napier’s demands and had forwarded the documents to his lawyer.

When asked about Napier’s statements that the billboard was false and the LEMSC did not have the authority to investigate perjury, Nanos said Napier was “using semantics” to cover his lie to the council.

Napier’s packet also included a screenshot from a No More Napier Facebook post that read, “He’s being investigated by the FBI for allegations of perjury (again).”

Napier said he has never been investigated by the FBI for perjury and, “The mere assertion that the FBI would even investigate perjury — a state charge — is patently absurd.”

When asked, Nanos offered no proof that Napier is under investigation and said he’d heard it from "someone I trust"; he told a reporter to ask the FBI. The FBI historically does not confirm or deny investigations.

Napier’s demand letter said he would be willing to “forego legal proceedings” if Nanos, among other things, issued a public apology to him "to every media outlet in Pima County," apologized in a half-page newspaper ad and on a billboard admitting "his campaign billboard and social media postings were false," and take down the Facebook page. He did not give a deadline for the request to be met.

Nanos said in an interview he would not apologize to Napier.