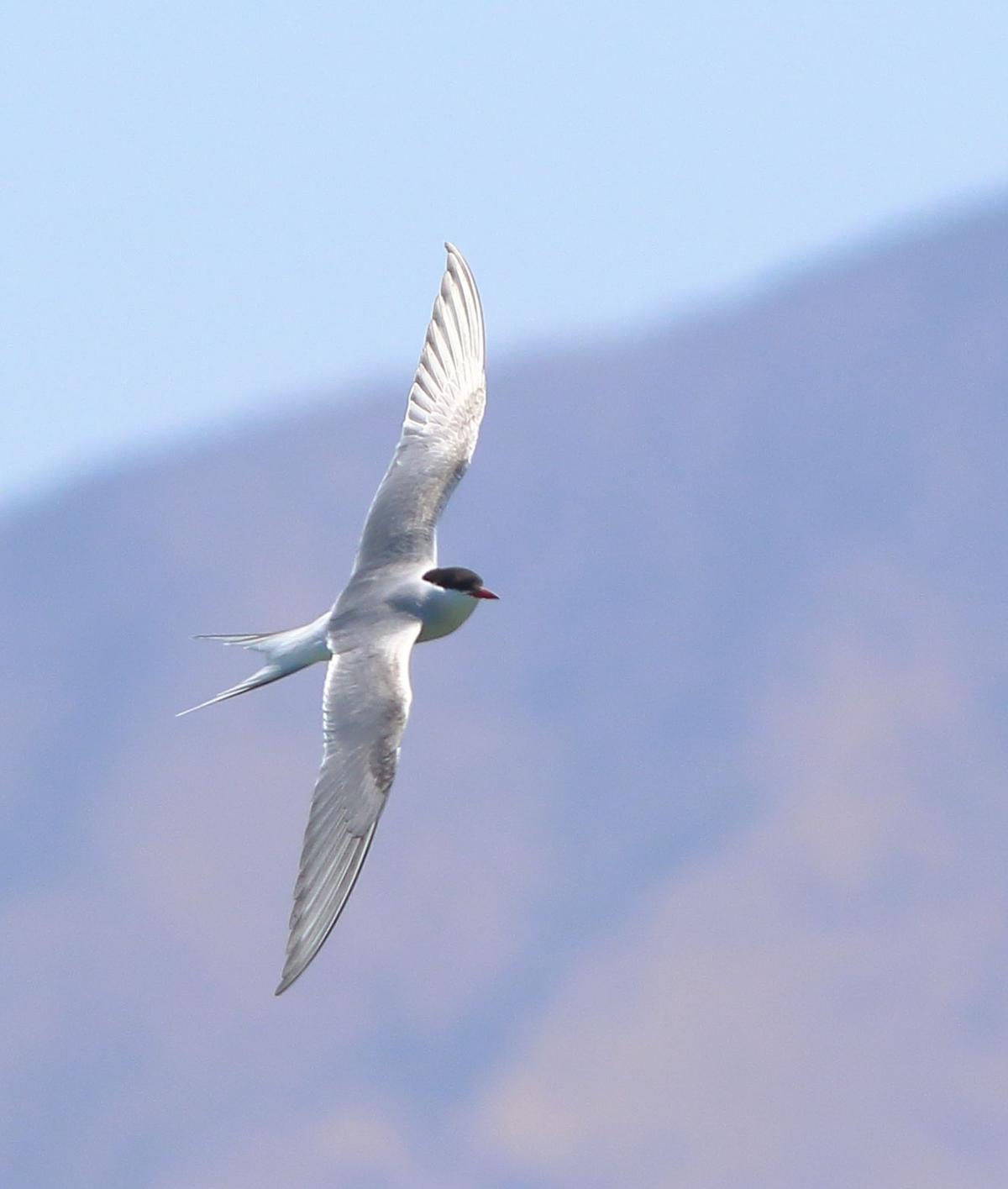 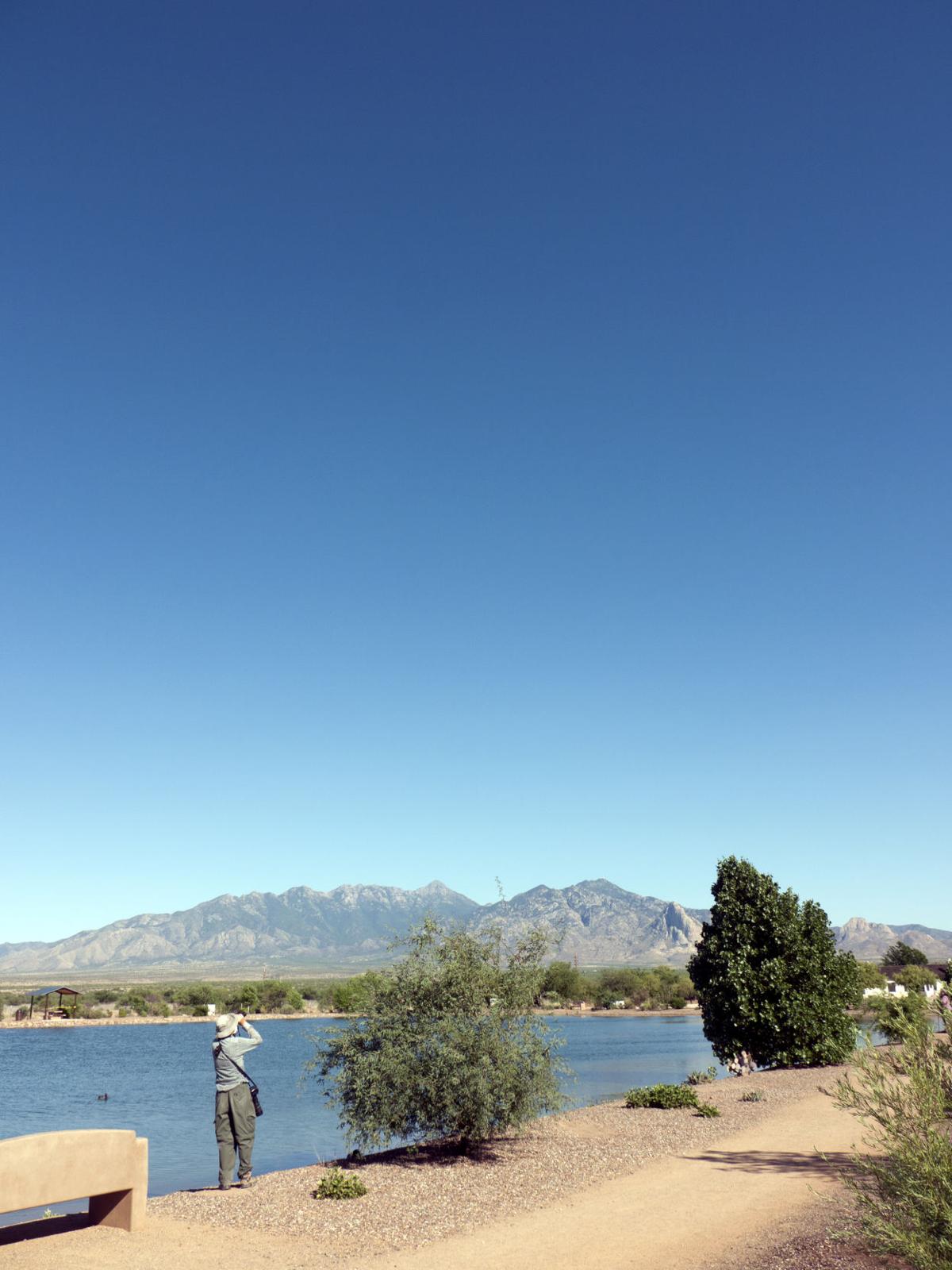 A birder captures the last glimpse of an Arctic Tern at Canoa Ranch Pond on Monday afternoon.

An Arctic tern flew beyond its usual migration routes on Monday, sending birders flocking to Historic Canoa Ranch to catch a sighting of the usually seafaring bird before it headed for the coast.

The bird is known as a long-distance heavyweight with migration routes spanning from the Arctic to the Antarctic. It spends most of its life over open water, rarely making its way inland to the Arizona desert.

Common on either coast of the U.S. and in the northern reaches of the continent, the last time one was spotted in Arizona was 2010, according to a number of birders visiting Historic Canoa Ranch lake late Monday afternoon.

Patricia Isaacson arrived at the lake earlier in the day to photograph the tern, and estimated more than 75 fellow birders were there, adding the “one-day wonder” to their “lists.”

Many birders track and catalog sightings through Ebird, a joint project of the Cornell Ornithology Lab and the National Audubon Society, which has been around since 2002, so when a rare sighting is entered the flocking begins.

Isaacson’s list has seen a number of rare additions in recent weeks and she said now until August is prime birding season in the region.

“If a really rare bird shows up, my husband and I drop what we’re doing,” she said. “It becomes kind of a game of chase to see something that doesn’t belong where it is.”

Isaacson has recently been darting from the Chiricahua Mountains to the Arivaca Cienega at Buenos Aires National Wildlife Refuge and places in between. She had her first encounter with a Mexican Spotted Owl a few days ago in a never-to-be-revealed location in the Chiricahuas – the owl is endangered and advocates keep their locations highly secretive – and witnessed the rare Berylline Hummingbird, who’s  been frequenting the Santa Rita Lodge.

Isaacson said “people are going bonkers” over the Clay-colored Thrush recently spotted at the Arivaca Cienega. “It’s the first time ever in the history of birding it has shown up in Arizona.”

Late in the afternoon at Canoa Ranch, John Saba and Mark Ochs confirmed the recent bevy of rare sightings soon after catching a glimpse of the Arctic tern before it flew off, likely for good.

“We had the Clay-colored Thrush on Saturday and the Crescent-chested Warbler in the Chiricahuas two weeks before that, which is really a tough warbler to get,” Ochs said.

“I’m not sure if they were shot or they were found,” Saba said.

Ochs, whose birding involves traveling throughout the nation, debated with Saba whether seeing a dead bird was worthy of being added to someone’s list.

Saba said at one point it was common for birders and scientists to kill and collect specimens, but nowadays advanced optics offer a better way to appreciate the animals.

“You know, in the old days I used to lead field trips to the old Canoa pond and we would come here all the time and I wrote all my birds down in a notebook and then when Ebird came around I put all my records online," Saba said.

“Then I noticed that I had the only records for Canoa, all those people that came on my field trips never took field notes and never entered them. Now, just recently, I noticed that some woman found her mother’s bird notebook and entered her records, so there’s one more record from about 1983 from here besides mine,” Saba said.

Dara Vasquez, a birder from Gilbert, arrived at the lake after a two-hour sprint south and after the tern had flown away.

“It already went off, huh? Did you see it fly off?” she asked Saba.

“Dang, I missed it,” Vasquez said.

“Well, it’s hard to second-guess birds,” Saba said in keeping hope she would get to see it.

As the wind rippled the pond’s surface and rustled native vegetation and the sun continued to fall, another couple of birders arrived with the hope of seeing the Arctic bird.

Stefany Boleyn from Indiana and her mother, Karen Boleyn, a local resident, craned skyward waiting for the tern to show up again.

“I think the longest it had been missing was an hour and a half, so we’re gonna give it a little longer,” Stefany said.

“There are definitely worse places to sit waiting for a rarity to come back,” Boleyn said, commenting it was her first time to the Canoa Ranch lake.

As the Boleyns waited for the tern to return, Stefany spotted a Bronzed Cowbird, a bird on her “life-list,” a bucket-list of sorts for birders.

“So it’s not a total loss anyway,” she said.

By all accounts the ranch’s lake and recently added 2.5 acre cienega continue to be a draw for birds and birders as anticipated.

Earlier in the year Pima County developed the cienega – a marshy, wet area – north of the pond, adding about 600 plants and trees with the hope it would become a habitat for shoreline birds and increase the bird variety found at the pond.

And that variety will likely increase after the planned seven-acre pollinator garden comes to fruition.