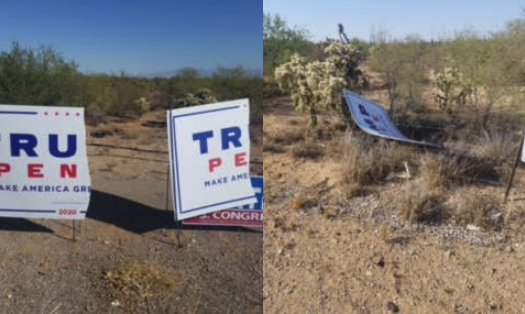 Trump signs are trashed near Sahuarita in two photos provided by the Sahuarita Tea Party. 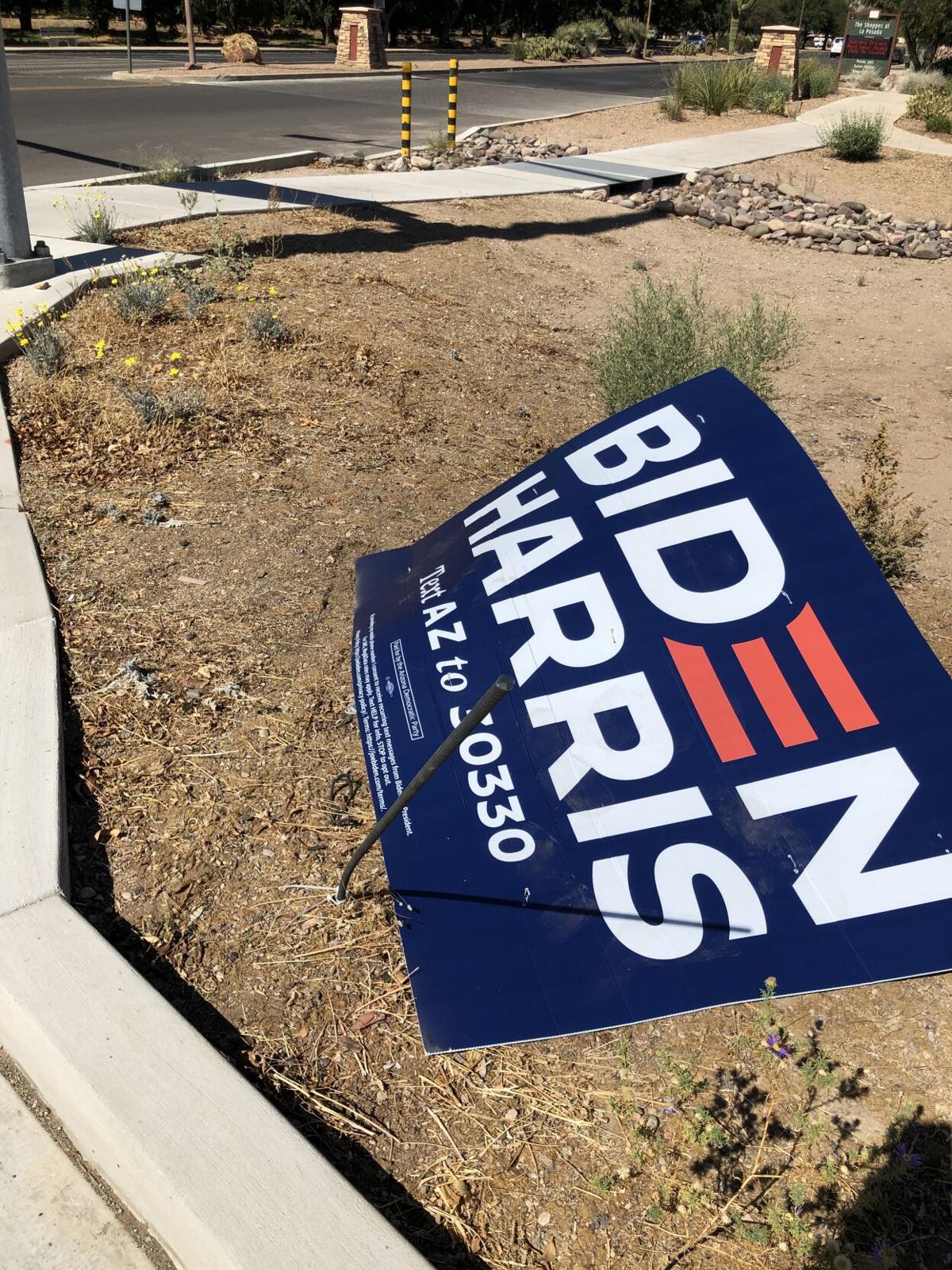 A four-by-six foot Biden-Harris sign lies in the dirt Monday near the Continental Road entrance to La Posada. 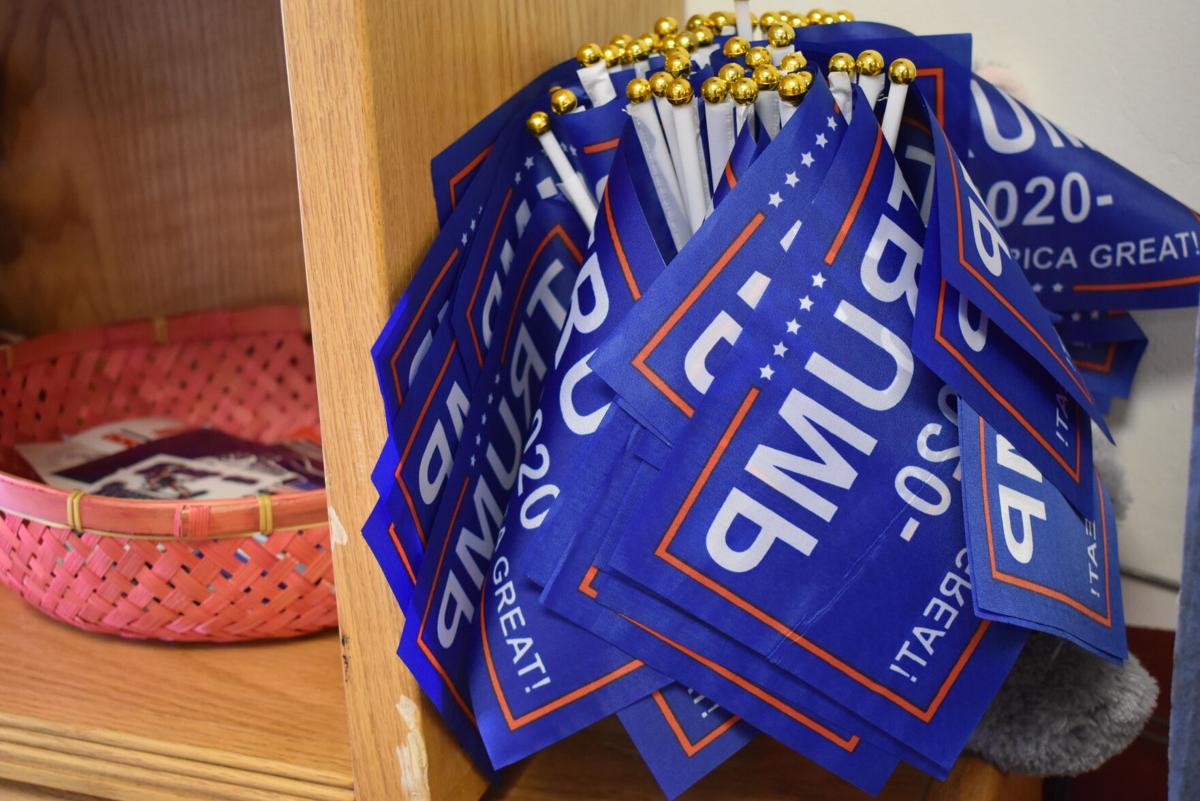 The United Republican Club of Green Valley/Sahuarita has received reports of Trump/Pence signs being stolen. 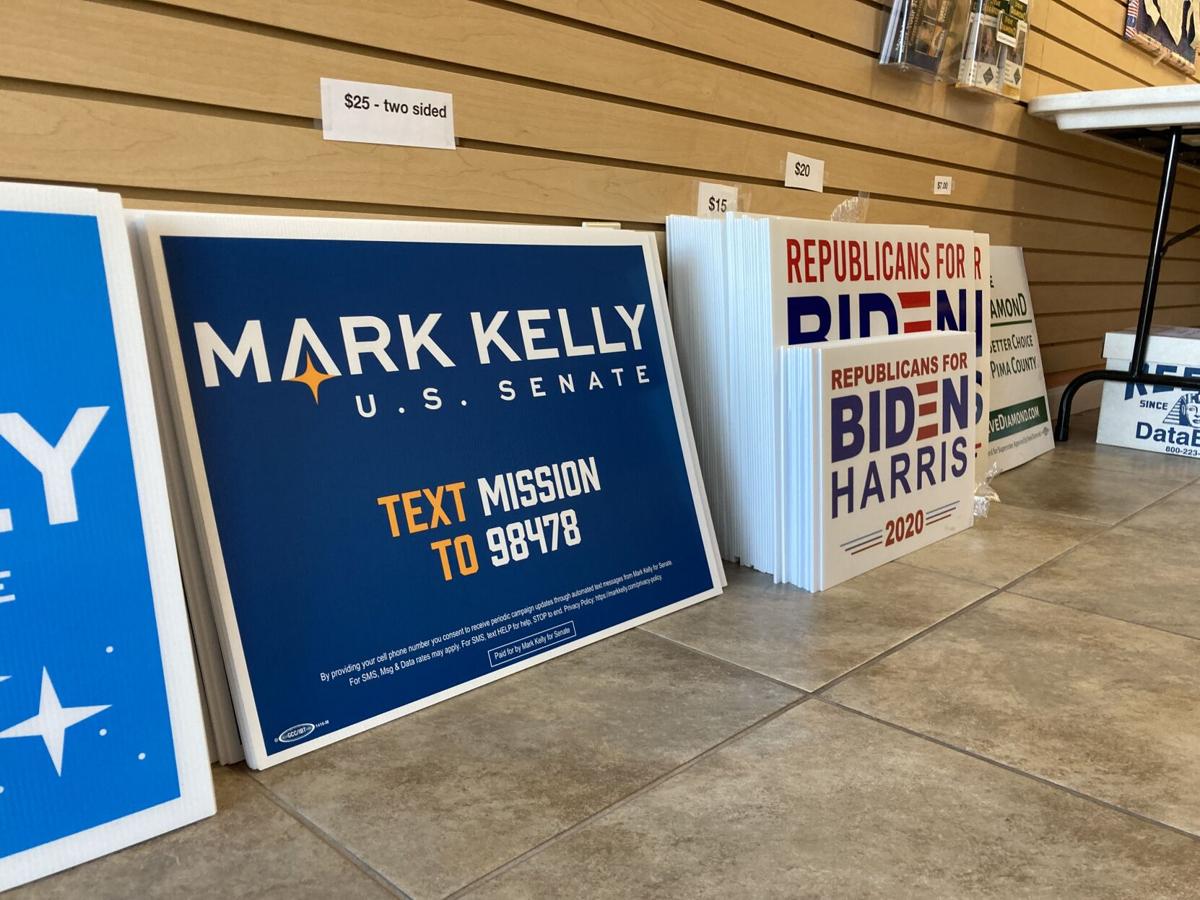 Trump signs are trashed near Sahuarita in two photos provided by the Sahuarita Tea Party.

A four-by-six foot Biden-Harris sign lies in the dirt Monday near the Continental Road entrance to La Posada.

The United Republican Club of Green Valley/Sahuarita has received reports of Trump/Pence signs being stolen.

Republican and Democratic leaders agree on one thing this election season — stealing signs and damaging campaign signs is out of bounds.

The chairs of the Pima County Democratic and Republican parties released a joint statement Monday condemning “an epidemic of political-sign theft and damage. This is not just an unacceptable assault on free speech and a threat to the democratic process, it is illegal in Arizona under ARS: 16-1019.”

The statement by Democrat Alison Jones and Republican David Eppihimer comes in the wake of numerous reports to police and the Sheriff’s Department of vandalism and theft. The practice isn’t unusual, but 2020 brought closely contested and highly divisive campaigns for president and U.S. Senate to Arizona.

Law enforcement officials have said in the past that unless somebody is caught in act, apprehension and prosecution are unlikely.

But that's what happened Sunday when two adults were arrested in Tucson on suspicion of stealing Trump signs. After a call reporting sign stealing and a description of the suspects' vehicle came into 911, a Pima County Sheriff's Department airplane saw the vehicle stop and someone step out to swipe a sign.

Deputies pulled the car over and found two Trump signs. Both adults in the vehicle were charged with a misdemeanor and released.

Reports locally come from both sides, with Biden and Trump signs going missing anywhere from McGee Ranch to Quail Creek.

Over the last few weeks, the Sahuarita Police Department and Pima County Sheriff's Department received eight to 10 reports of sign tampering or theft in the area.

"We understand that people have strong feelings about this election. Rather than breaking the law to steal signs, we suggest channeling your energy into campaigning for your favorite candidate or cause," Eppihimer and Jones said in the statement.

The Democratic Club of the Santa Rita Area and the United Republicans of Green Valley/Sahuarita have heard plenty of reports of theft and vandalism.

Matthew Boyd, president of the Democratic Club of the Santa Rita Area, said they’ve heard from several people coming into their headquarters who said campaign signs have been stolen or defaced.

He said they placed eight four-by-six-foot Biden signs on Sunday. By Monday morning, one in Quail Creek was missing and one near the entrance to La Posada on Continental Road had been torn down and run over.

Even so, sales of signs — which help finance the headquarters at Continental Shopping Plaza — are brisk, he said, particularly those that say “Republicans for Biden.”

Helen Boyd, also a volunteer at the headquarters, said many people are reluctant to put bumper stickers on their vehicles and some have had their cars keyed.

“It’s a very common conversation,” she said, adding people don’t have any reservations about sticking them to their golf carts.

Matthew Boyd said post-election the club wants “to open the door to all people and have honest discussions about democracy” through bipartisan community conversations. He said there needs to be two parties but the division that’s been sewn, particularly this election season, is unnecessary.

“I think the greatest contribution to our community would be to have those discussions,” he said.

Peggy Bengtson is office manager for United Republicans  and said she has heard a number of stories about Trump signs stolen or damaged.

“People are saying that they’re gone, being taken off the streets ... torn and vandalized,” she said, adding some have had profanity spray-painted on them. “The signs aren't only being taken out and broken, the wires are being cut and destroyed.”

Though signs get stolen every election season, Bengtson said this year is worse than previous years.

“It seems worse. I look out every morning to make sure mine is still up,” she said. “I tell people they can take all the signs they want, he’s still going to win.

Currently, they’re out of Trump signs and Bengtson said they have been flying off the shelves the entire season. For her, it’s exciting to see the volume of people still coming in to purchase signs.

Bengtson said the issue of sign vandalization and stealing is “systemic all around the country” and it’s frustrating to see it occur.

“I’m sorry they feel they have to do that,” she said. “They are supposed to be a party of inclusiveness and diversity and compassion and all that stuff but they are writing ‘f-you’ on our signs; that doesn't match up.”