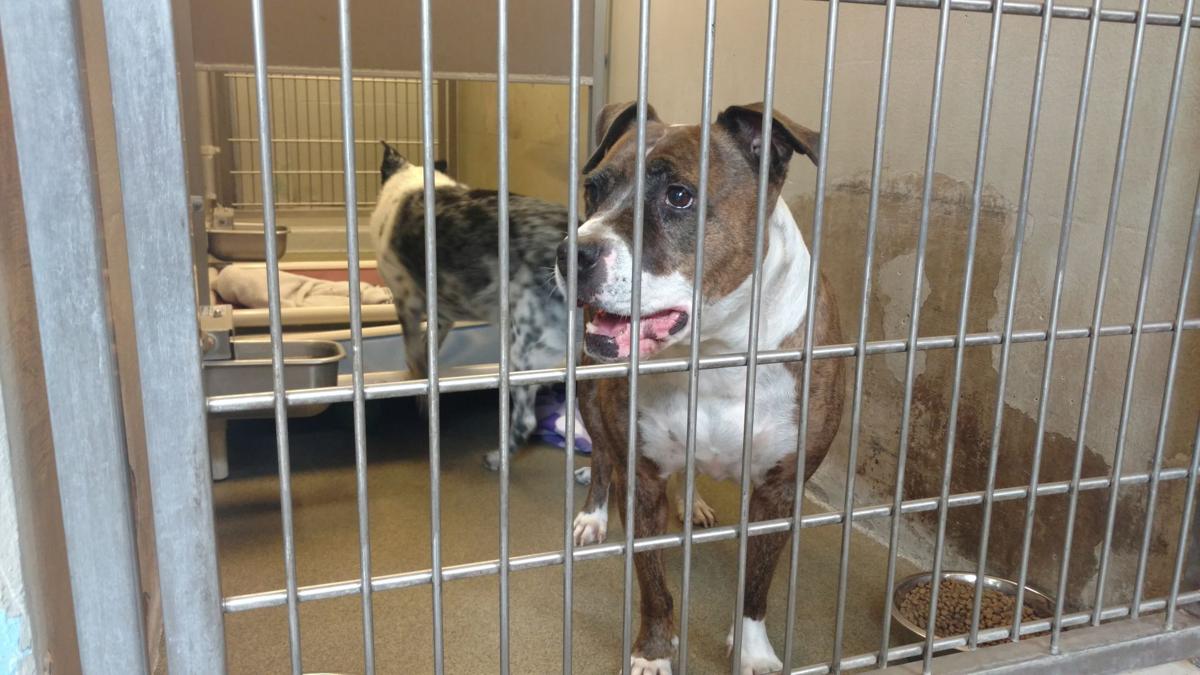 Magnus is among several dogs labeled as a pit bull at the Pima Animal Care Center, but PACC officials say there is no way to tell what a dog actually is without a DNA test. 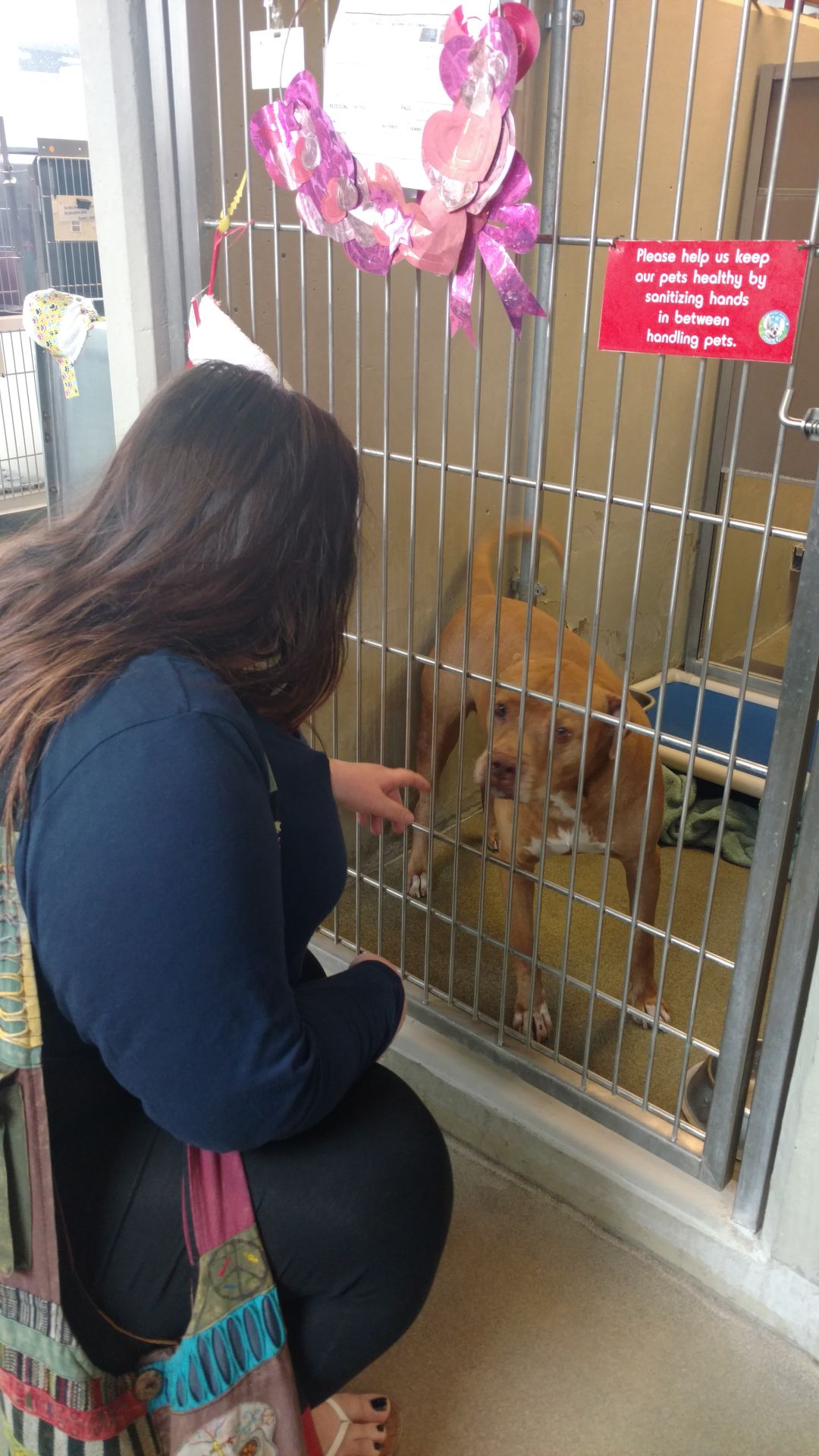 Madison Morgan of Tucson checks out Thor, a 5-year-old pit bull at Pima Animal Care Center on Monday. Morgan loves the breed and has two at home.

Magnus is among several dogs labeled as a pit bull at the Pima Animal Care Center, but PACC officials say there is no way to tell what a dog actually is without a DNA test.

Madison Morgan of Tucson checks out Thor, a 5-year-old pit bull at Pima Animal Care Center on Monday. Morgan loves the breed and has two at home.

The next time you rescue a dog from the Pima Animal Care Center you'll have to guess what breed you're adopting. The animal shelter will no longer label dogs by breed, and The Animal League of Green Valley is considering following suit.

They're among several rescue groups across the country considering or making the move, all with one goal: Find homes for hard-to-adopt breeds.

But several organizations say it's irresponsible and potentially dangerous not to identify breeds to potential pet owners.

Justin Gallick, PACC’s executive director of community engagement, said people are reluctant to adopt dogs that have been labeled pit bulls, for example, because they have been “vilified” by the media. And, he added, they might not be pit bulls at all.

He said labeling dogs “pit bulls” or anything else is guesswork based on physical characteristics. Many times they're wrong, he said. Most of the dogs coming in to a shelter are a mix of more than two breeds, making physical breed identification next to impossible, he said.

“I’ve seen an American Bulldog labeled a Mastiff Dalmatian because it had black and white spots and a bulky build,” he said.

When dogs are mislabeled, no one wins, he said. New owners may not get the characteristics they are looking for and certain breeds may go overlooked because they have a reputation.

“There has always been a scary scapegoat dog that is vilified by the press,” Gallick said.

“If people see ‘pit bull’ on a kennel card, some people won’t adopt them,” Gallick said. “But when I see a statistic that says a particular breed is more prone to biting than another, that’s not a statistic I’d give any weight to. In general, pit bulls are a really sound breed. They tend to be more emotionally stable.”

“Dogs are inherently positive creatures. They love people and they’re a much nicer species than humans,” Davis said. “In my 10-plus years here, we’ve only had three or four we had to admit we couldn’t rehabilitate.”

TALGV is also considering not labeling its dogs because staff make bad guesses and unfairly stigmatize pit bulls and other breeds, Davis said.

“I did a study and asked all of my employees to write down the breeds of all of our dogs and every one of them was different. Basically, we were just guessing and it was unfair,” Huffman said.

Since the policy change, Huffman said her shelter has seen a decrease in the time it takes to adopt out hound dogs and pit bulls, two breeds that have a stigma, she said.

The college also showed potential dog owners pictures and videos of dogs labeled as pit bulls and other breeds, and discovered the pit bulls were considered less approachable, trainable, intelligent and friendly than dogs described as another breed — but the dogs were the exact same dogs.

“We want people to fall in love with the dog, not the breed,” Morefield said. “These dogs are sometimes five and six generation mutts, but they are being judged by what their ancestors were.”

Teresa Chagrin, an animal care and control specialist with People for the Ethical Treatment of Animals, is appalled at the trend of not labeling dogs. She said dogs often end up in shelters because people don’t know what they’re getting into in the first place.

“Tricking people into adopting dogs is not a safe and humane way of increasing adoptions,” said Chagrin, who is based in Baltimore. “When dogs exhibit behaviors and traits that are purposely bred into them for centuries, families need to know what they are getting into in order for them to provide the animal with the care they need.”

For example, herding dogs, such as corgis and collies, tend to nip at people’s heels, Chagrin said. If people don’t know that, they may end perceiving the behavior as aggression and either return the dog to the shelter or chain it up and neglect it.

Pit bulls are athletic and energetic terriers that need a lot of attention, exercise and training so they don’t engage in destructive behavior, Chagrin said.

“They were bred for centuries to fight other dogs and bulls in pits and there’s a growing trend of them killing other beloved pets and owners within hours of getting home from a shelter,” Chagrin said. “Nobody wins when that happens.”

“People know what these animals look like,” she said.

Texas resident Colleen Lynn started DogsBite.org to educate people about the dangers of pit bulls after she was attacked by one in 2007.

She and volunteers across the country research pit bull attacks. According to their research, between 2005 and 2015, dogs killed 360 people, and 64 percent of the attacks involved pit bulls. The organization alleges pit bulls and rottweilers contributed to 76 percent of the deaths.

In 2015, the organization found those two breeds accounted for 91 percent of dog-related deaths in the U.S.

The sole reason shelters want to stop labeling dogs is they want more pit bulls to be adopted, Lynn said. It has nothing to do with any other type of breed and is simply “one more way of being dishonest with the public.”

The end result will be more attacks, she said.

“Absolutely, maulings will increase,” Lynn said. “There’s no question about it.”

Arguing that it takes DNA tests to identify breeds is disingenuous, she said.

“A lot of people can ID pit bulls. They’re all over the Internet, they get promoted a lot,” Lynn said. “People go to shelters and pick them out. There are a lot of dogs at shelters that don’t look like pit bulls.”

“When you’re in a shelter situation, you don’t know where that’s dog been,” Lynn said. “Sure, there are quite a significant number that decide not to engage in a fight, but that’s the part that makes them dangerous, that unpredictability. Not all dog breeds are the same and not all dog breeds bite the same. They bite and hold.”

The last time the Centers for Disease Control released a report on the issue was in 2000. Researchers obtained records from the Humane Society of the United States, news accounts and death certificates and determined dogs killed 279 people between 1979 and 1994.

Lynn said her organization has tried to convince the CDC to release further studies to no avail.

Calls to the CDC this week were not returned.