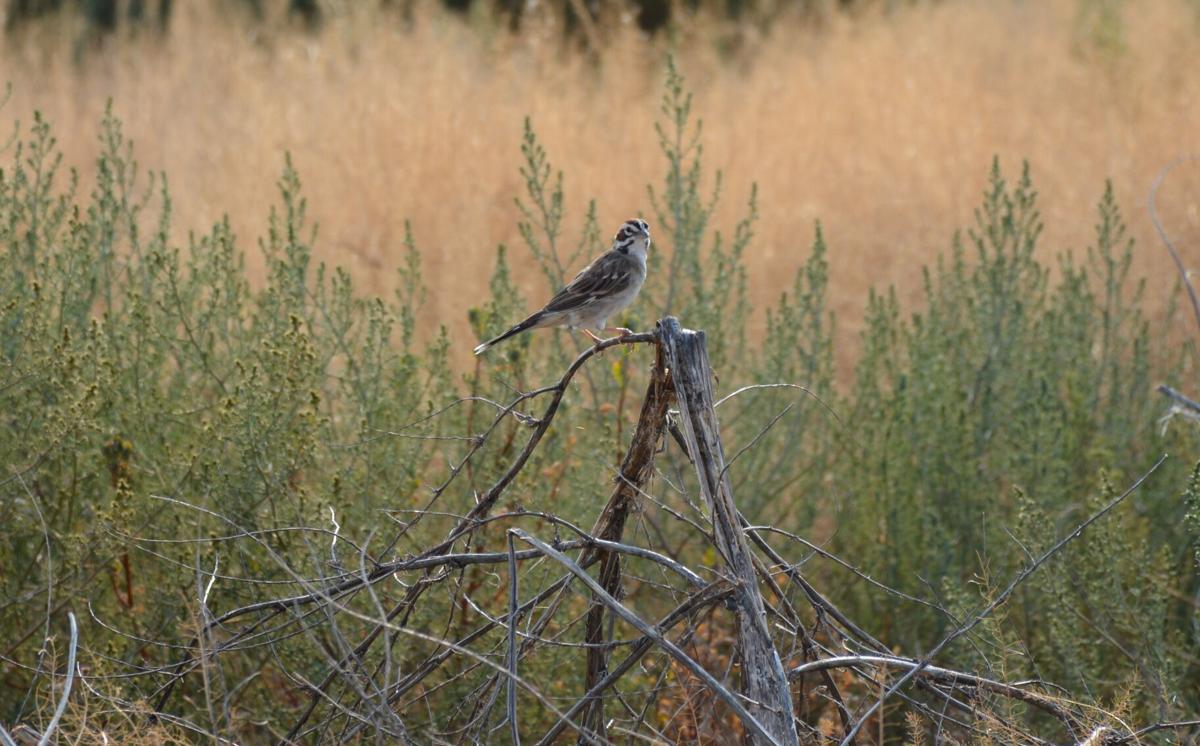 A bird enjoys the new pollinator garden at the Historic Canoa Ranch. 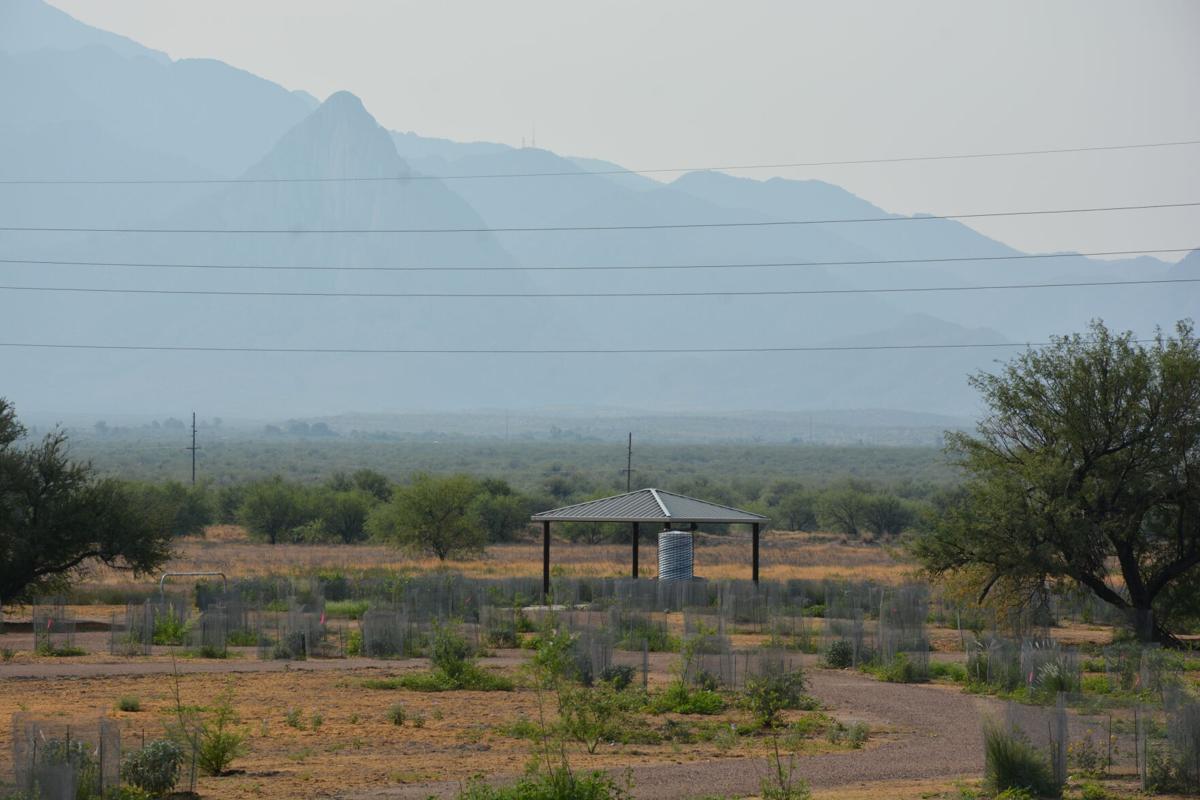 A view of Elephant Head from the ramada in the pollinator garden. 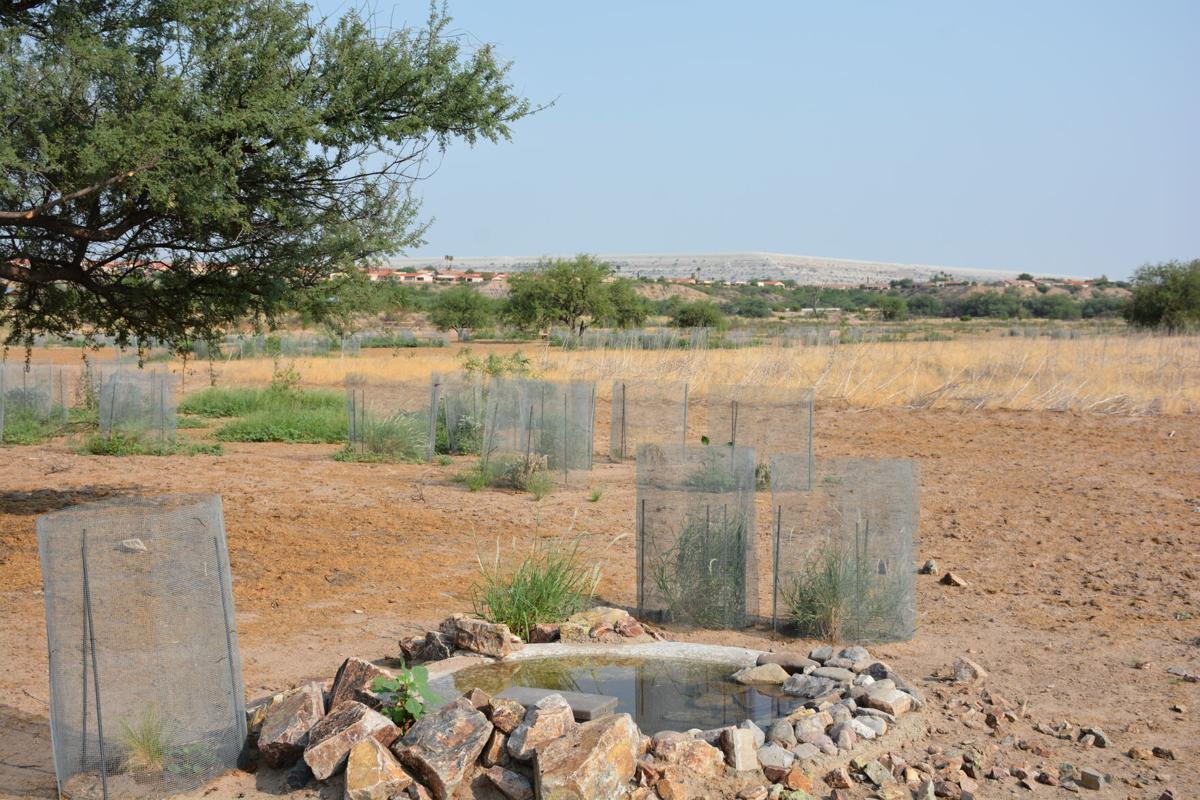 The wildlife drinker at the pollinator garden is a first for the county's Regional Flood Control District. 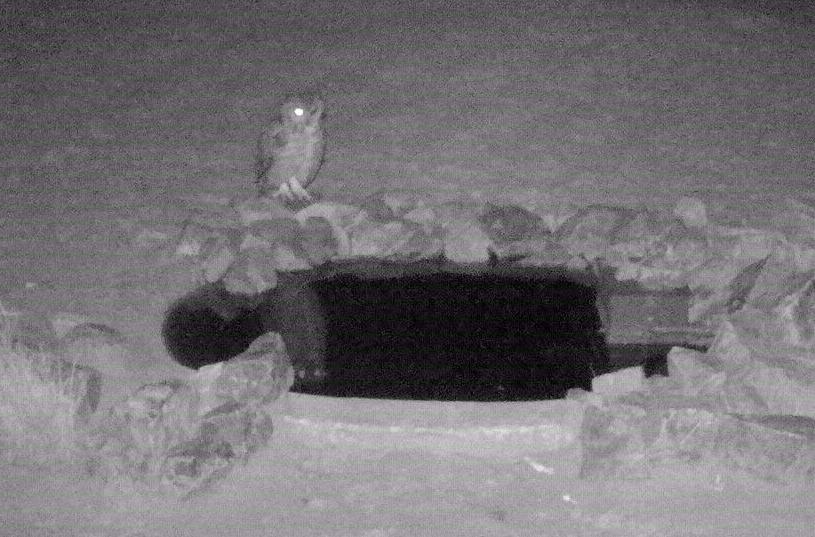 An owl takes in the scene at the wildlife drinker in the pollinator garden at Canoa Ranch. 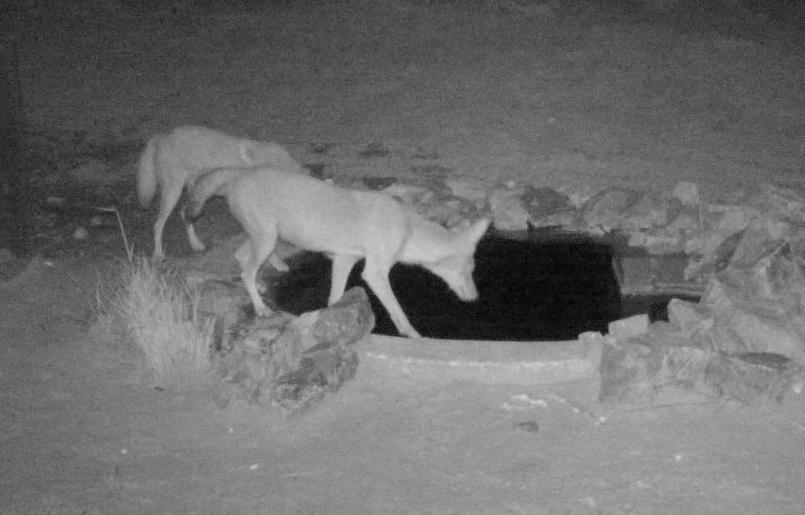 The county's wildlife camera catches coyotes taking a drink in the pollinator garden. 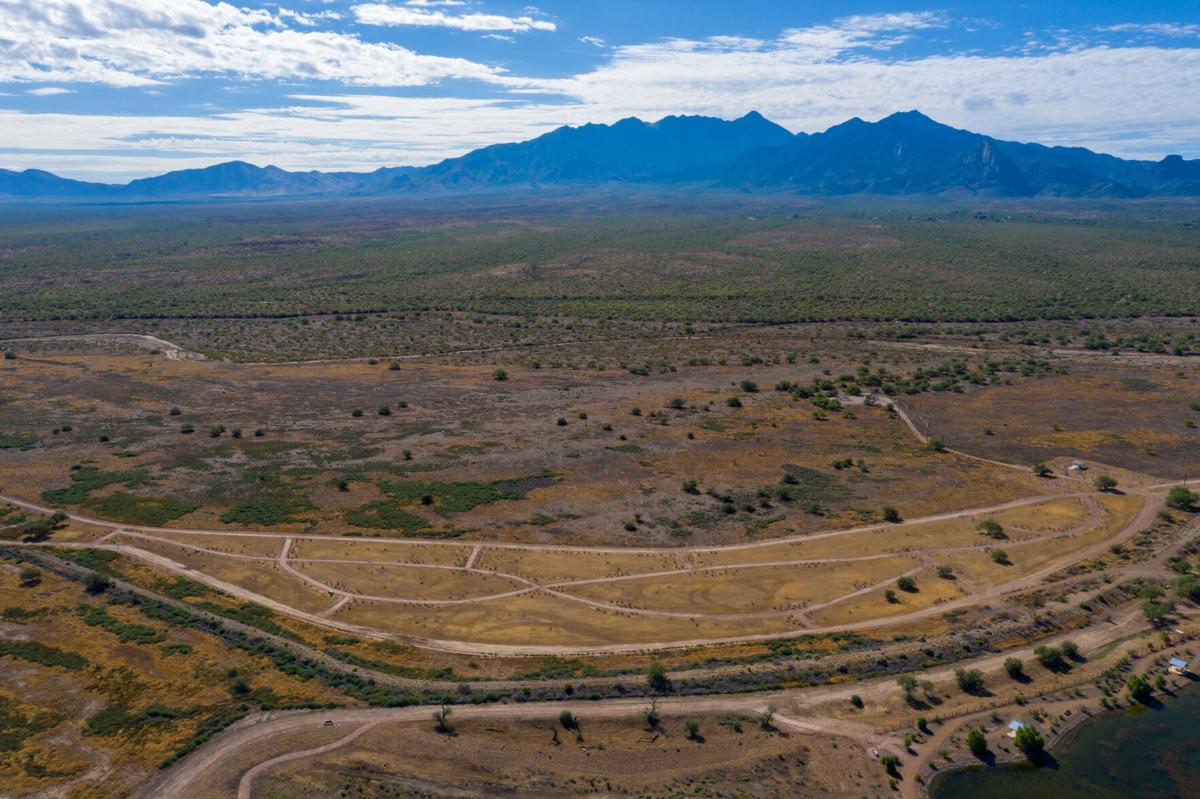 A view of the pollinator garden from above taken by Hunter Contracting Co. showing the final construction.

Coronavirus threw a big wrench into many of the fun summertime activities residents enjoy, but there's something new many might not know about – the pollinator garden at Canoa Ranch.

The lake, cienega and now pollinator garden at the Historic Canoa Ranch combine to create a significant habitat for migrating wildlife passing through the area.

"That was a really big push for us to create additional habitats," Brosnihan said. "It's a nice balance of three different habitat types that all enhance the Canoa Ranch site."

"The diversity is nice because there's a very different food web at each area," he said. "So that'll attract a more diverse area of animals within those food webs, and they'll be able to commingle in all these new habitats that are so close to each other."

This commingling in one centralized location provides an enhanced wildlife viewing experience for visitors as the variety critters showing up will increase.

Part of the pollinator garden includes a wildlife drinker – an artificial watering hole. Brosnihan said the drinker was a first for Flood Control and is a learning experience as they plan to incorporate more into a future project at Canoa Ranch.

Flood Control looked to other wildlife drinkers built around Arizona and began experimenting on the design they incorporated into the one constructed at the pollinator garden.

"We put one together and wanted to monitor how it was used and if the animals like the concrete or rock areas," Brosnihan said. "And it's interesting because on the wildlife camera you can see some animals will only want to go on the smoother concrete versus others that like to go down the rocks. It's been an interesting experiment for us and helped educate us to go forward and build the next couple."

So far, Brosnihan and Smogor have enjoyed the images caught by the wildlife camera, from cautious coyotes to a relaxed owl taking in the view. Brosnihan said they even found a deer enjoying a good hoof soaking in the watering hole.

While water is a strong lure for wildlife, it's not all that goes into creating a suitable habitat.

Plants are also a significant part of the equation. And the county needed plenty of them. Pima County's Native Plant Nursery in Tucson has kept busy providing many of the plants for the projects, and the biggest one is yet to come.

When the cienega wrapped up in February, the county's nursery provided about 600 plants and trees to the project. The county's next project, a 30-acre mitigation bank at Canoa Ranch, will draw even more plants.

Hatch said the pollinator garden is a medium-sized project, but the mitigation bank is the biggest one on the horizon.

He said the project calls for 3,788 plants and trees. The county's nursery would provide at least 2,800 of the plants, and the rest would likely come from private nurseries.

The 30-acre Mitigation Bank provides a large habitat area for wildlife and could give Canoa Ranch a dedicated revenue source in the future.

Flood Control is working with the U.S. Army Corps of Engineers on the project.

Brosnihan said the project, which also restores the area, would sell credits to other agencies and organizations that would offset the loss of habitat from their projects.

"It won't have trails, as a requirement of the Corps of Engineers," she said. "It'll just be pure restoration, water harvesting basins, more wildlife drinkers and extensive planting."

Even though there won't be trails, benches or ramadas, people will notice a difference once Flood Control and the Corps of Engineers finish.

Much like the pollinator garden before restoration, the 30-acre mitigation site is covered in Amaranth – commonly called pigweed. While pigweed is native to the area, the name is a clear indication that it's not especially desirable.

"Yeah, it's a big problem because it grows so fast," Hatch said. "It grows very fast, and it's very aggressive."

Because pigweed is so aggressive, it can beat other plants for living space and take over a vast area.

Brosnihan said the plan is to go through and blade the 30 acres to remove the pigweed and Bermuda Grass as they did with the pollinator garden.

"They're still fighting both of those species back," she said. "Amaranth is native, but it's almost a monoculture, which isn't desirable."

Aggressive weeds aren't the only challenges to restoring the land around Canoa Ranch.

The heat challenged the project as well.

This summer has pushed or broken different records and is even making a run for Tucson's hottest year. The current record is 1994, with 99 days hitting triple digits.

Tuesday marked 84 days with triple digits. The second hottest year was 1989, with 93 days at 100 degrees or warmer.

So far, Hatch said the nursery sent 18 plants to the pollinator garden as replacements.

"It just makes it a little more stressful for new plants to establish when we're in this 110-degree heat," she said.

The pollinator garden uses about 1.32 acre-feet of water annually. An acre-foot is the amount of water one-foot deep covering an acre, or one acre-foot is about 326,000 gallons.

However, the usage will vary with temperature and as plants become established.

The water comes from the lake and circulates it, keeping it cooler during the summer.

The heat isn't just a challenge for plants taking root.

"The heat always presents challenges," Smogor said. "The thing that I've seen is visitation can be challenging because there are limited hours for some people to be outside."

While the heat could be a deterrent, Smogor said Canoa Ranch is still a good option for people looking to get out of the house.

"The nice thing is that we're open and people can come," he said. "We just ask that when people do come in the middle of the day to bring the proper clothing, sun protection, lots of fluids and have a phone on you in case you get into a situation where you need to call first responders."

The county continues to restore Canoa Ranch's compound despite COVID-19 keeping the doors closed to the public.

Smogor said the visitor center is coming along, and plans are in the works for new fencing to replace the old chain-link fence that came with the property during its unoccupied period.

However, the addition of the pollinator garden provides the public with a new option when recreational options are on the decline.

"The Anza Trail, there's a four-and-a-half-mile walking path there, intermingled with the pollinator paths that are adjacent to the Anza Trail," he said. "Along with the pathways around the lake and cienega that tie into each other, there are neverending opportunities."