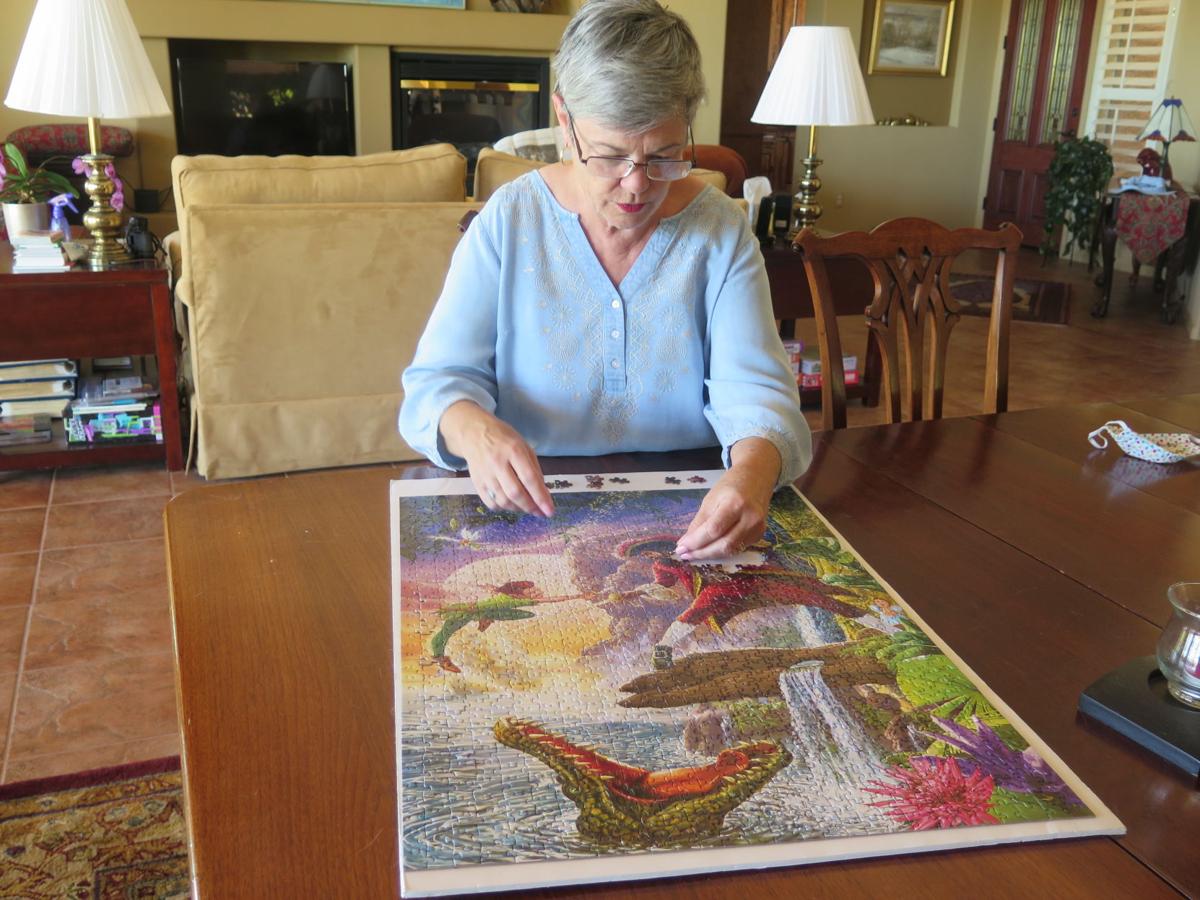 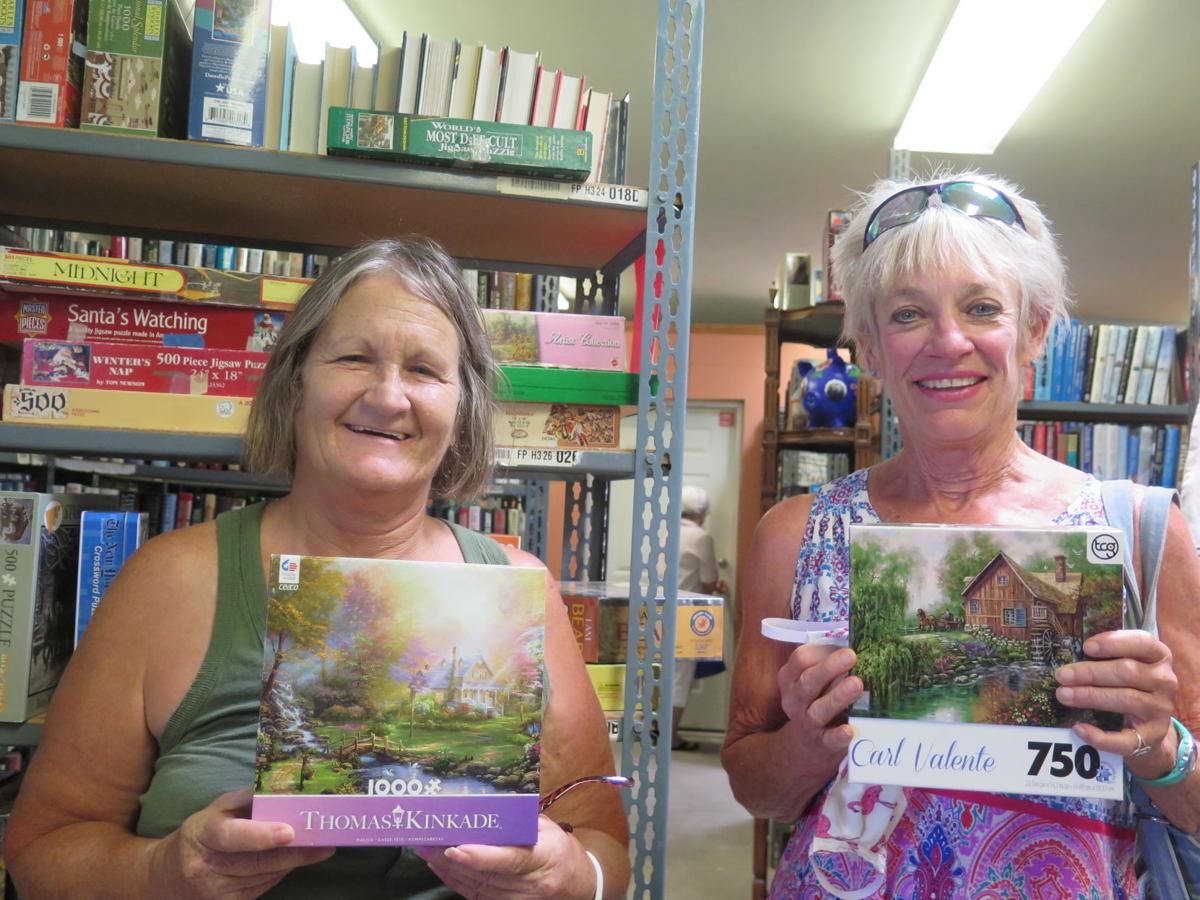 Leigh Wilkins and Ann Tenpenny are ready to check out these puzzles at Green Valley Books and get a store credit when they return them.

Leigh Wilkins and Ann Tenpenny are ready to check out these puzzles at Green Valley Books and get a store credit when they return them.

Staying home more during the COVID-19 pandemic is causing a resurgence of an age-old pastime: jigsaw puzzles. They can keep a puzzle person busy for hours at a stretch while exercising the brain and offering a break from bleak news.

John Spilsbury, a London mapmaker, cartographer and engraver, is credited with making the first jigsaw puzzle in 1762. He would mount a map on to sheets of hardwood and using a hand saw to cut along boundaries to create puzzles to teach the children of King George III and Queen Charlotte.

The jigsaw was invented in 1880, and became the preferred tool for cutting shapes.

Jigsaw puzzles became very popular during the Great Depression because they provided cheap and long-lasting recreation that families could work on together.

At the start of the COVID-19 pandemic, demand for jigsaw puzzles saw a surge in sales similar to that of the Great Depression.

Step inside Green Valley Books on La Canada just north of Esperanza where owner Mark Sy (The Book Guy) offers shelves of used, boxed puzzles that can be returned for store credit.

“Lately, once puzzles come in, they’re out the door,” she said.

Recently Ann Tenpenny was returning completed puzzles and looking for new ones.

“I do puzzles when I can’t be outdoors. I’ll do one at my house and do one at my boyfriend’s house. I like adult puzzles that are challenging, have pretty scenes and include animals,” she said.

What does Tenpenny enjoy most while doing puzzles?

“When I find a difficult piece that fits!” she said.

Another puzzle aficionado who frequents Green Valley Books is Leigh Wilkins. She and her 80-year-old mom, Martha Ganad, try to finish a puzzle in a day — and so what if it fills the entire dining room table.

“We enjoy landscapes by Thomas Kinkade that have a reflection, which makes them twice are hard,” Wilkins said.

Due to current popularity, WalMart’s selection of puzzles for adults is slim.

The works-of-art puzzles can be put together permanently with Puzzle Guard, a glue that puzzlers can use to make any puzzle a showpiece to hang like a painting.

Carol Goldberg has been attracted to jigsaw puzzles since childhood. Now she usually works on 1,000-piece puzzles because they’re a good fit for a card table. She has a 2,000-piece puzzle but said it ties up her dining room table for too long.

“I’ve started it three or four times but have yet to complete it,” she said. “I will. Someday….”

Her current collection is about 30, and is varied but she leans toward scenes of national parks, scenic roadways and notable places like Yosemite Falls, Notre Dame and the Boston waterfront.

“There are lots of puzzlers out there and many new ones with the COVID onset of stay-at-home orders. At one point in March and April, orders to all puzzle makers topped the order load at Christmas,” Goldberg said, adding that she trades and lends some puzzles to neighbors and friends.

Puzzle quality is important and her top picks are Ravensburger, Pomegranate and Master Pieces.

Diane Diamond enjoys 1,000-piece puzzles but prefers smaller ones of 300, 500 and 750 pieces as she can complete them more quickly.

“With the pandemic time melts away when I’m working on a jigsaw puzzle. I’ve missed or been late to meetings and appointments because my mind focuses on the colors, shapes and patterns and I don’t think of much else but finding the right piece for the right place,” she said.

“When I find the right piece, it lures me to look for the next one even if it takes a while. It seems that once I’m ready to give up I suddenly find another piece that fits and the challenge moves on,” Diamond said.

Her puzzling gene may have been passed on to her grandson, who was completing 500-piece puzzles by himself when he was 5.

Peggy Richmond satisfies her desire to do jigsaw puzzles by doing them online at brainsbreaker.com. She comes from a family who enjoys puzzles and likes the ease of taking puzzles on her laptop where she can do them sitting outside, while on vacation or as a passenger while her husband drives.

When Richmond starts a new puzzle, she separates the online pieces by color to get a good idea where the pieces will fit. An image of the finished puzzles can be minimized or enlarged on the screen.

Brainsbreaker.com puzzles work with Windows or Mac, on a laptop or desktop, but not on a tablet. For anyone who decides on the program there is a one-time charge of $20.

Nancy Lammers did jigsaw puzzles with her family during the long, cold winters in Maine but hadn’t done any since moving to Green Valley more than 12 years ago. Then came the COVD-19 stay-at-home order.

“I prefer 1,000-piece puzzles. Some brands are more challenging than others and I enjoy those. If I purchase them, they are usually scenes of rural daily life, an old truck with produce on it, a farm stand or a house with flowers around it,” Lammers said.

When she buys a puzzle for herself she also sends the same puzzle to her 17-year-old grandson in Indiana. They start at the same time and see who can finish first. Right now, they’re neck-and-neck, she said.

According to Forbes, the seventh most searched for item on Amazon on March 24 was puzzles for adults. This was a week after the pandemic became serious news in the U.S.

For puzzle-making company Ceaco, which manufactures Thomas Kinkade puzzles, sales around the second week of March were up 300 percent compared to the same week in 2019.

Ceaco, based in Massachusetts, is one of the largest producers of jigsaw puzzles and family games in the U.S. Trying to keep up with the sudden demand has been a challenge as some manufacturers haven’t been considered “essential businesses.”

Puzzle manufacturer Ravensburger has seen an increase of family and children’s puzzles as schools closed and children and teens were learning at home. Ravensburger’s Krypt puzzles offer challenging puzzles of one color in varying shades and has seen a surge in popularity as children do schoolwork at home.