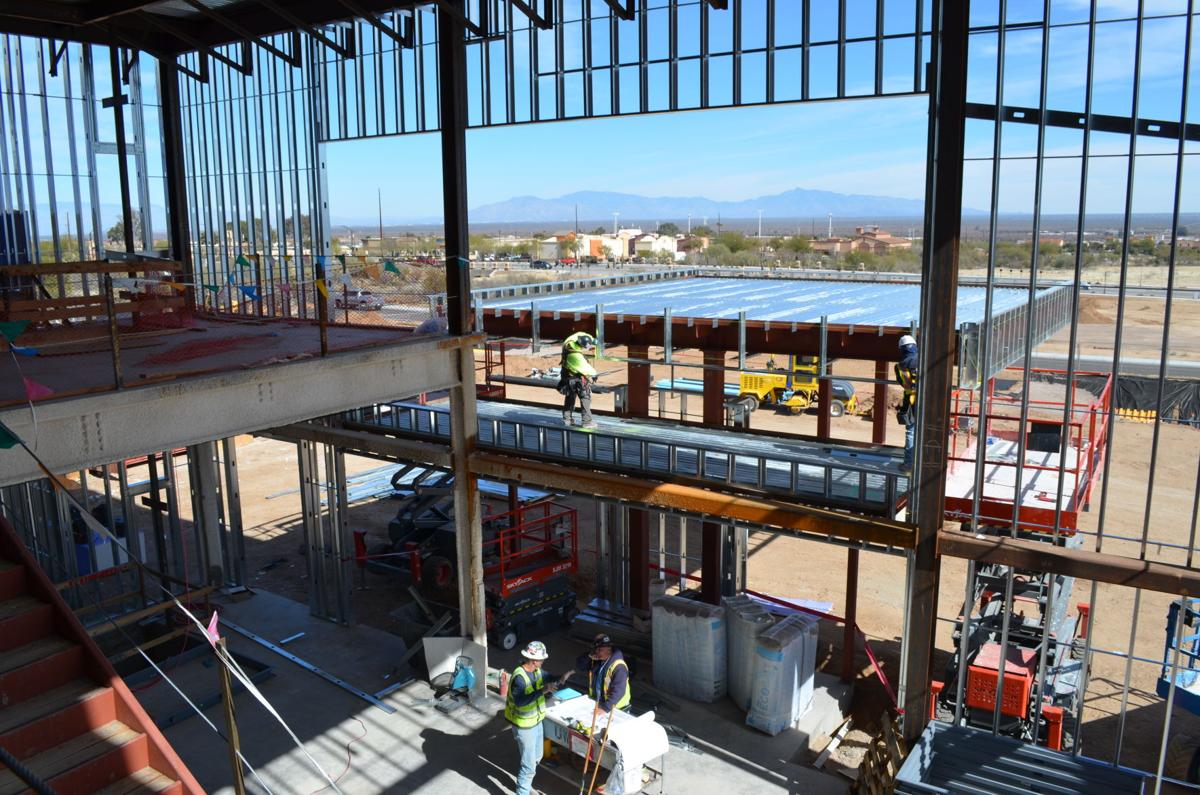 Construction crews are making progress on a new hospital rising in Sahuarita. 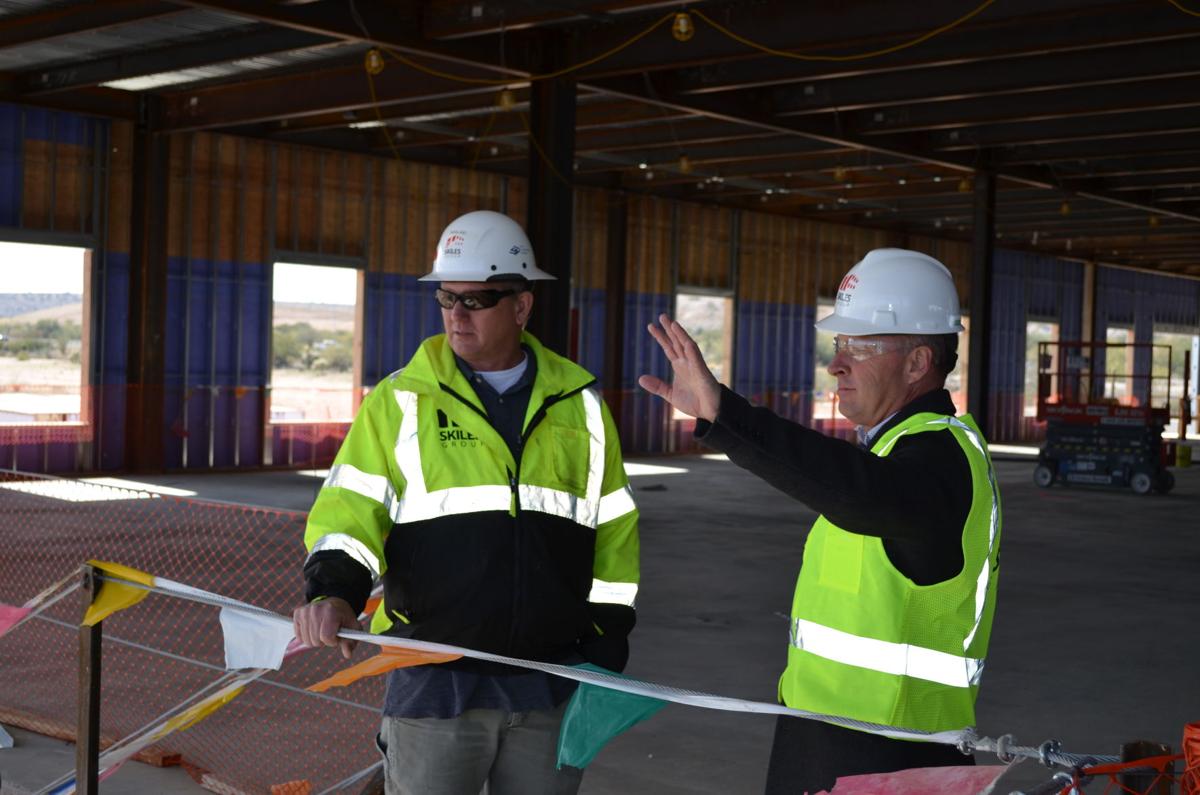 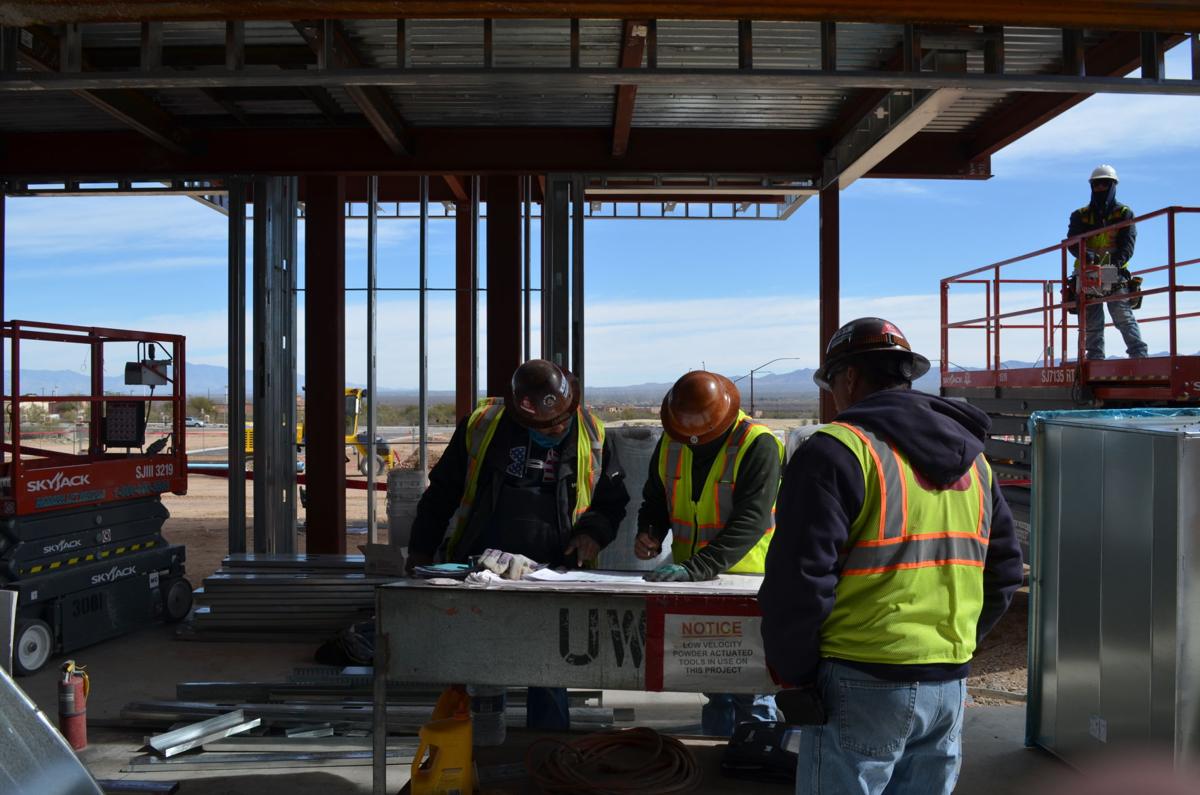 Work crews check out the plans for the next phase of the buildout at the new medical facility. 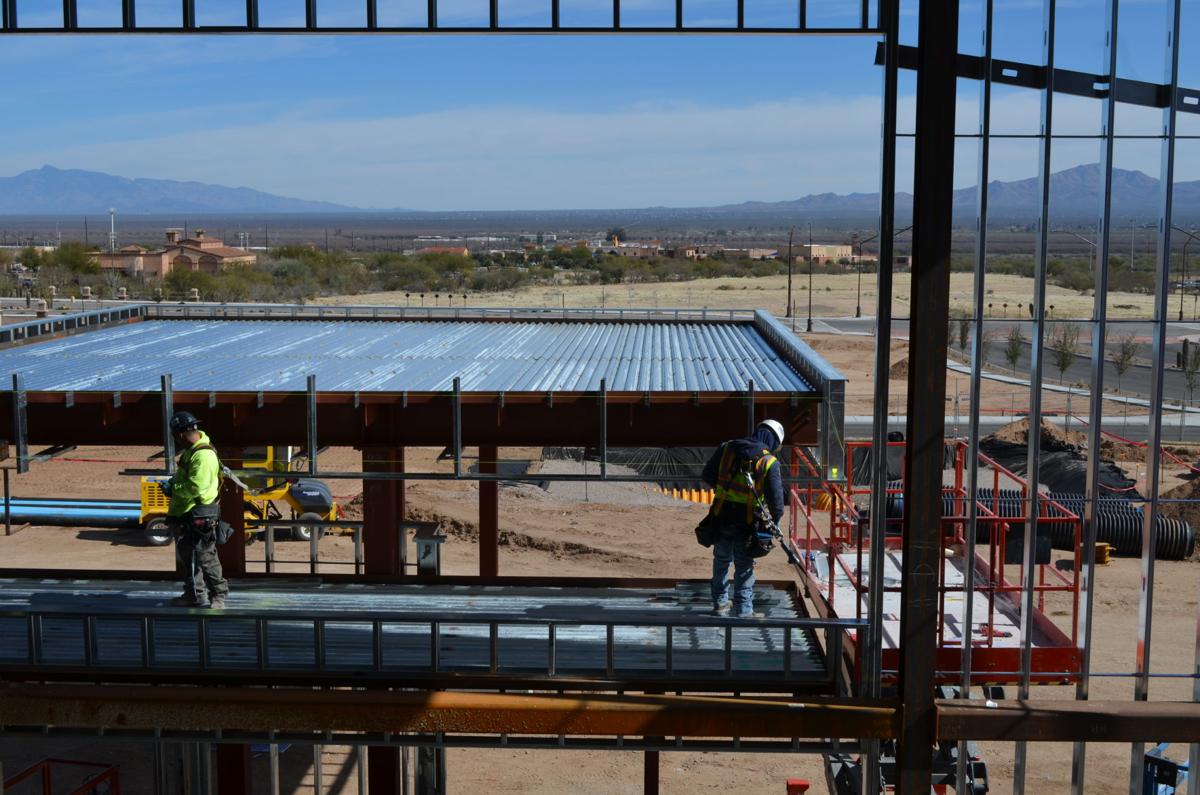 Construction crews are making progress on a new hospital rising in Sahuarita.

Construction of the new $45 million hospital in Sahuarita is on time and on budget, according to Kevin Stockton, regional president and market CEO for Northwest Healthcare.

The hospital will now be known as Northwest Medical Center Sahuarita.

"We assign a locator name," she said of the marketing decision for the Sahuarita facility, which was made a few months ago.

The 18-bed facility now under construction is expected to wrap up in the third quarter of this year, Stockton said. The Sahuarita expansion is part of a $150 million expansion by Northwest that includes a renovation of its Tucson hospital. The health system also operates urgent care facilities, specialty centers and a physicians’ group.

Stockton recently donned a hard hat, safety glasses and a vest for a group tour of the construction site, which was led by Skiles Group project superintendent Marland Crabtree.

Currently, Crabtree has 75 to 100 people working on the project at one time, the peak level of labor on the site.

They are well underway with the installation of new mechanical, electrical, and plumbing system. They have also started interior framing of walls in the future lobby, ER, three operating rooms, diagnostic imaging area, the onsite lab and patient rooms.

As work continues, the space is constantly being assessed by engineering experts and clinical staff to make sure details such as ceiling heights, monitor placement, cabinet locations and hallway widths are just right for offering the most efficient patient care, Stockton said.

Building system and design features include the following:

•Building automation system, which will provide centralized control of heating, ventilation and air conditioning, lighting and other systems

•Back up water and gas supplies if the primary supplies fail

•Solar panels to power the lights on an adjacent helipad

Utilizing light steel framing, Crabtree said the two-story building will encompass about 75,000 square feet. He said Skiles Group has a strong healthcare facility focus – both new construction and renovations for its clients.

The first floor of the building will be devoted to the hospital proper; the second floor will house medical offices for primary care, cardiology, orthopedics, gastroenterology and general surgery services, Stockton said. It will also accommodate additional beds as demand grows, he added.

A spokeswoman said Friday that a second-floor build-out is "several years away, so at this time, we have not identified the specific number of beds for that expansion."

The two-story acute-care facility, just south and east of Sahuarita Road and Interstate 19, will employ about 200 workers, including nurses, physicians and support staff workers. The ER being built will not be focused on trauma cases, Stockton said. Instead, those patients will be transferred by ambulance or helicopter to “higher acuity” settings in Tucson.

Northwest Healthcare is already expanding its provider base in the Sahuarita/Green Valley area in anticipation of the facility’s opening. Recently, Dr. John Spencer and John Modrzejewski, family nurse practitioner, became part of the Northwest Allied Physicians practice, which provides primary care services to patients at its clinic in the Rancho Sahuarita Marketplace.

Dr. Eliza Panczyk, cardiologist, has also begun practicing in the area and has joined the clinic next to Northwest Urgent Care on Duval Mine Road.

“We’ve heard from the community about the lack of primary care providers in the Sahuarita/Green Valley area. We are working to meet this need and will add an internal medicine as well as family medicine physician to our practice next October,” Stockton said.

“It won’t be 200 employees on Day One; more like 100-plus,” Stockton said. But those numbers will rise in time and include mostly new hires.

A site administrator will be hired to lead the team.

“Being in the area for the past ten years, it made sense to continue our expansion,” Stockton said. “The growth in the area made us realize there was enough of a population base to support a hospital,” he added. “People have responded well to the care we provide, and we wanted to build on that with this hospital.”

More details about the grand opening date will be announced this summer, Stockton said.

He said a consultant hired by Northwest forecasts a regional economic impact of $165 million over the next five years.

Northwest’s expansion in the area comes as the former 49-bed Green Valley Hospital emerged from bankruptcy in 2018 and was rebranded as Santa Cruz Valley Regional Hospital.

“We are excited to have Northwest Hospital coming to our community,” said Jeremy Sharpe, vice president of Rancho Sahuarita, which is leasing the site to the hospital. “This addition will not only bring crucial health services to the area, but will help bring hundreds of new jobs to residents.

"The addition of the hospital will also allow for the growth of other service offerings, which will bring additional restaurants and businesses to serve their employees and the community at large.”

Calls to Jeremy Sharpe inquiring about the status of future tenants at the site were not immediately returned.

Steve Sinovic is an Oregon native who has worked as a journalist all over the western United States.