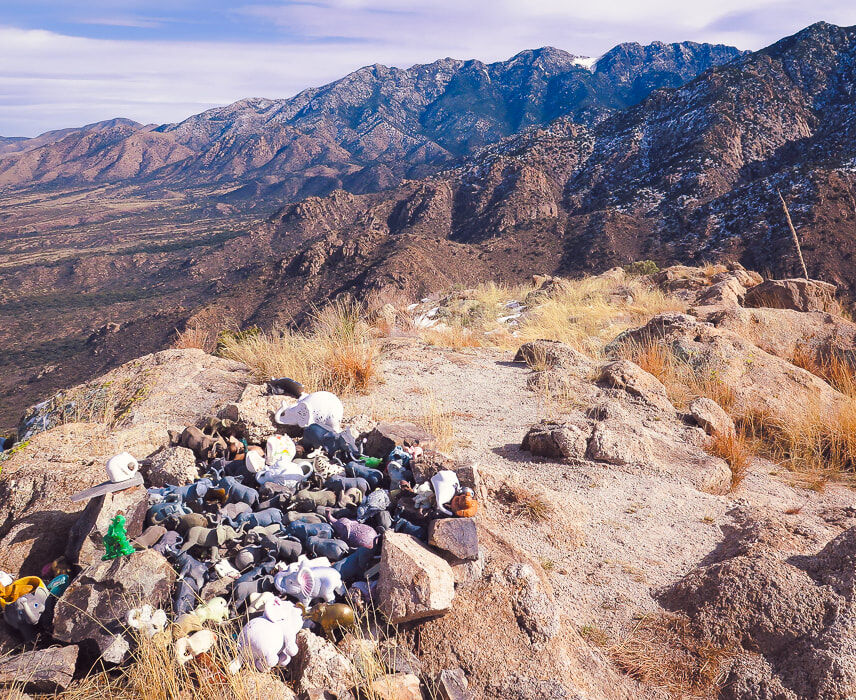 A sign asks hikers not to leave items at the summit of Elephant Head, a tradition that has become a problem, according to the U.S. Forest Service. 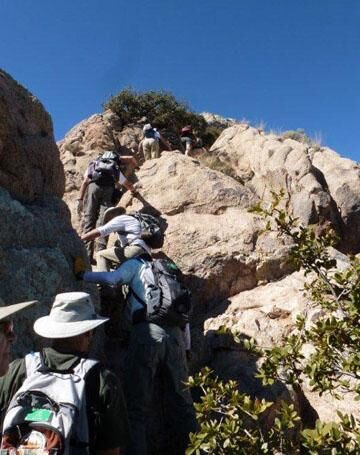 Members of the Green Valley Hiking Club head up Elephant Head in 2014.

A sign asks hikers not to leave items at the summit of Elephant Head, a tradition that has become a problem, according to the U.S. Forest Service.

Members of the Green Valley Hiking Club head up Elephant Head in 2014.

Veteran hikers know the rule — enjoy the land but leave no trace that you were there.

For decades, that rule has been pushed aside as hikers who reach the summit of Elephant Head leave behind tiny statues or carvings of elephants to mark their success. Over the years, that has led to drawing elephant shapes on rocks with paint or markers.

The U.S. Forest wants it to stop.

A bright yellow sign posted on the trail Sunday asks climbers and hikers to end the tradition in the name of preserving the Mount Wrightson Wilderness Area. Besides, it points out, it’s littering and against the law.

“Sights and sounds of humans don’t belong in the wilderness,” said John Titre, a recreation staff officer for the Coronado National Forest’s Nogales Ranger District. “We want people to hike there and enjoy it but it got to be overwhelming.”

Titre said they had received some complaints about the growing pile of elephant figures and had removed many of them, including a 10-pound carving. The 6.3-mile hike covers 2,700 feet in elevation.

Titre said the notice isn’t anything more than what has been expected of people in the past. It’s more of a reminder that things have “come to a breaking point” and something needs to be done. He’s relying on the hikers to help clean up, asking them to pack out any elephant figures they find on the summit.

“It gets weathered and looks like a pile of junk, like something you’d see at a bad garage sale,” he said.

U.S. Forest Service spokeswoman Heidi Schewel said recreational use has increased because of the pandemic.

“People have expectations when they go into the wildness and it isn’t to see man-made stuff,” she said.

David Linn, president of the Green Valley Hiking Club, said if things have come to the point of defacement, it isn’t going to go over well with his fellow hikers.

Linn disagrees at times with those who manage the wilderness area but said the rangers’ job “is a balancing act” of protecting the land while allowing the public to use it.

“Some rangers are very strict, others are not,” he said. “Their mandate is to make it serviceable for all the people all the time.”

He said he doesn’t know of anybody who has put an elephant on the summit and said the difficult hike doesn’t get many takers. He said their club rates it an “A” — the toughest — on an A-B-C scale. The club plans to make the Elephant Head hike Thursday and he expects just five of the 300 members to show up.

Linn also doesn’t expect the sign to change much.

“They’re thinking it’s probably getting worse and they have to stop it somewhere,” he said of the Forest Service. “But people will continue to do it.”