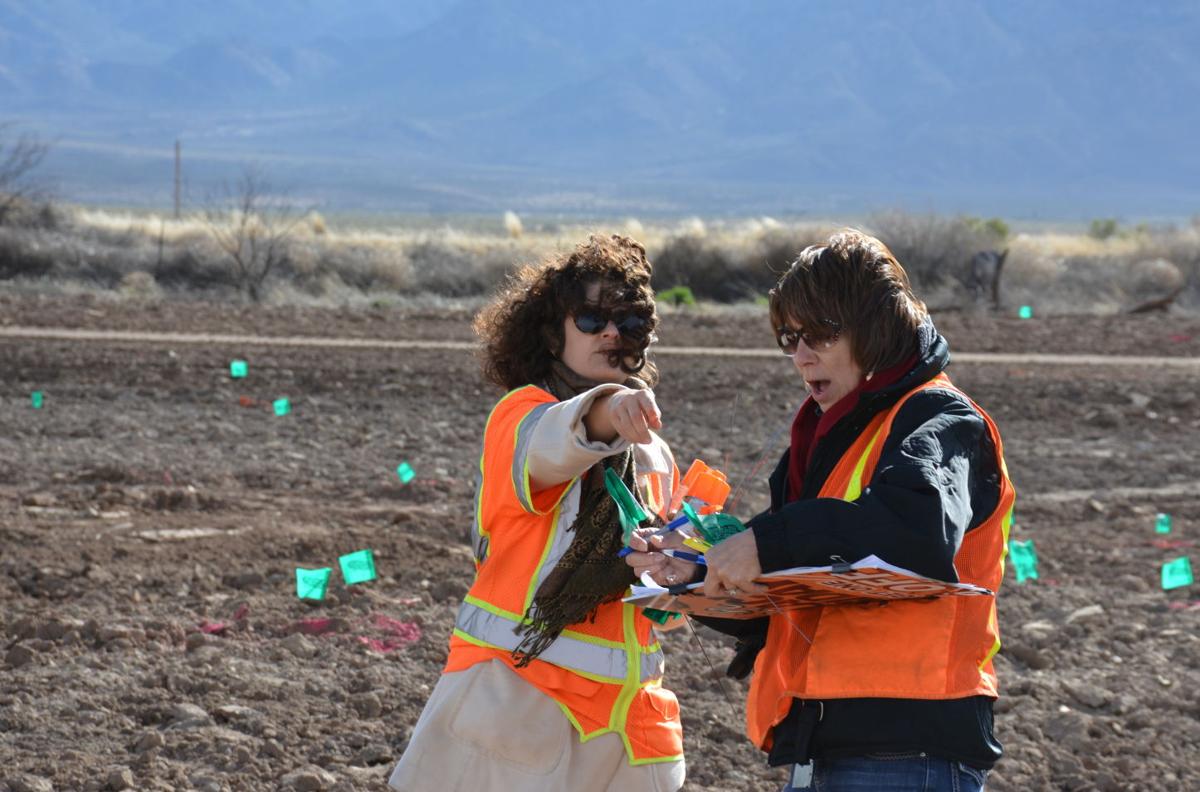 Deirdre Brosnihan, left, and Sandy Bolduc with Regional Flood Control District map out where new vegetation will go as the county nears completion of a new wetland area at the Historic Canoa Ranch. 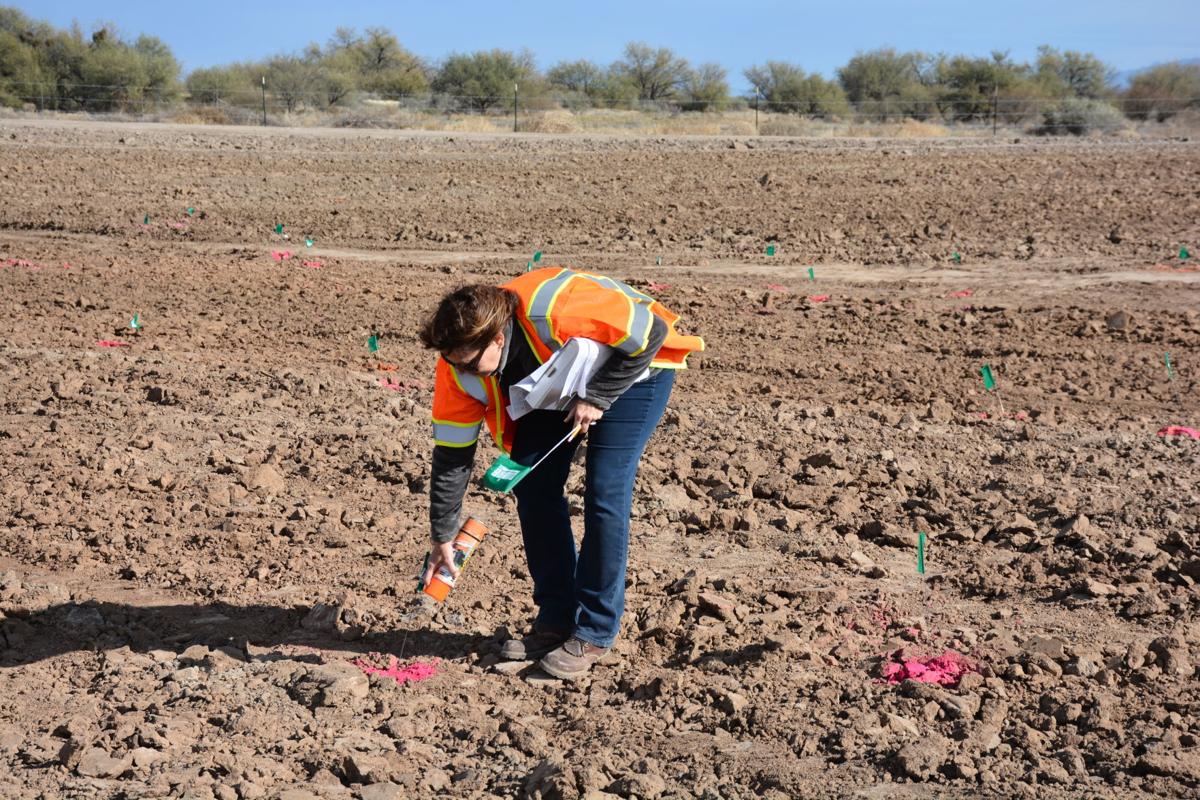 Carla Danforth with the Regional Flood Control District marks locations for vegetation going into the new cienega at the Historic Canoa Ranch. 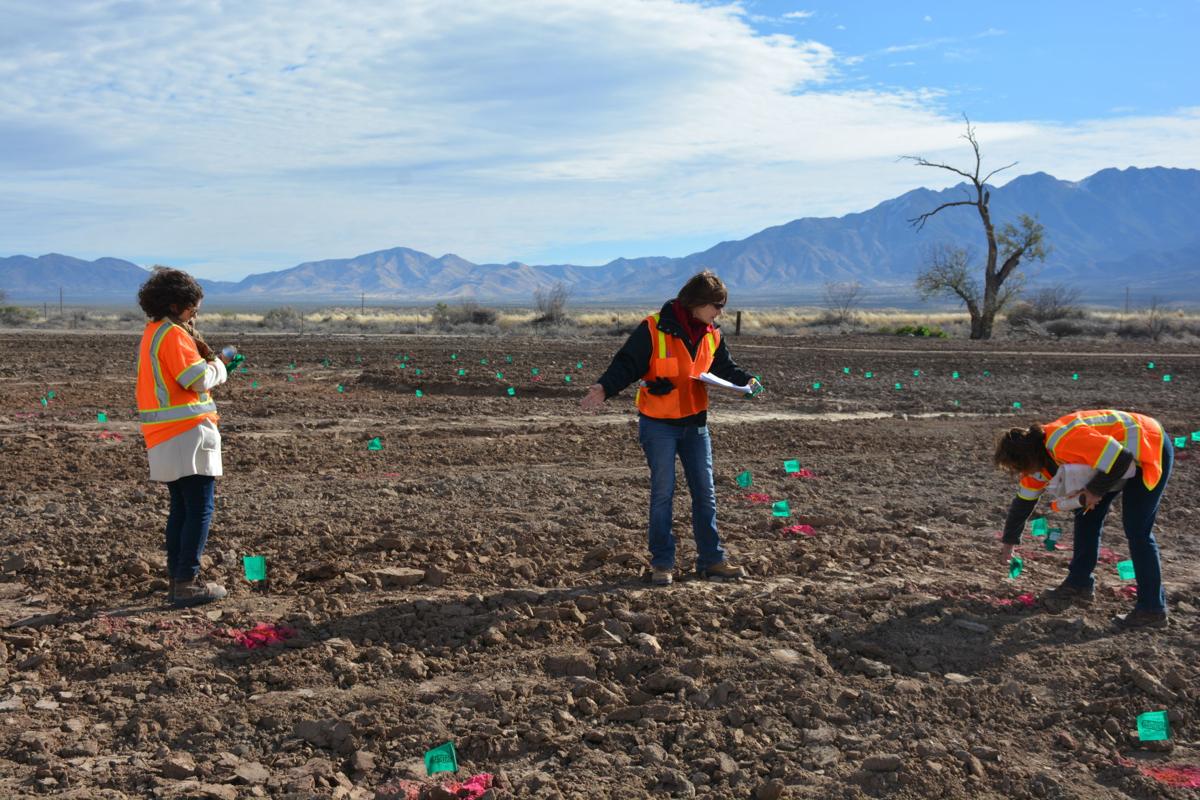 Deirdre Brosnihan, Sandy Bolduc and Carla Danforth with the Regional Flood Control District work on where about 600 plants and trees will go in the 2.5 acres of wetlands at the Historic Canoa Ranch. The county should finish the project in February. 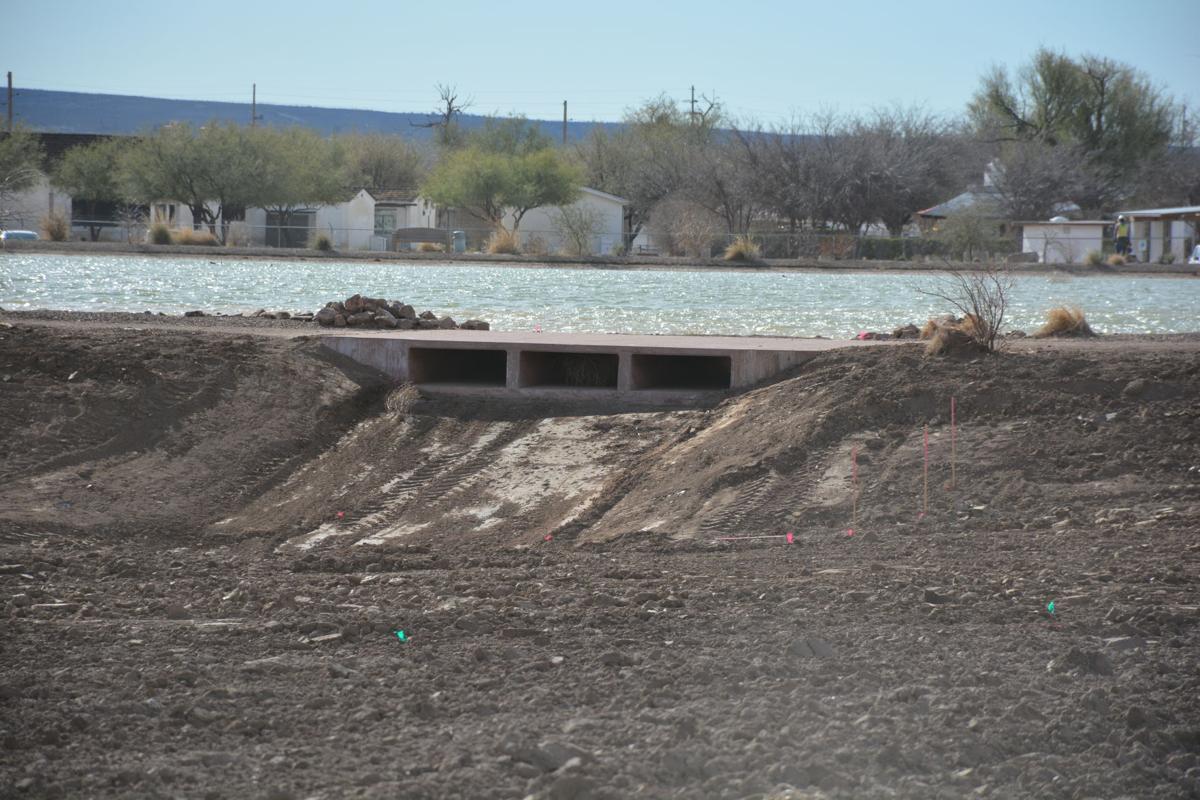 Pima County will have a new 2.5 acres of wetland at the Historic Canoa Ranch next month. The county will maintain the cienega – a marsh– by scheduling controlled overflows through a spillway on the adjacent pond.

Pima County will have an additional 2.5 acres of wetland area completed at the Historic Canoa Ranch next month, and the latest addition could put Green Valley on the map as a premier bird-watching haven.

The cienega — a marshy, wet area — is being constructed by the Regional Flood Control District just north of the ranch's pond.

Work on the $405,000 cienega started in early December. Despite a few minor delays from rain last month, Flood Control expects to have the cienega completed in February.

On a windy Wednesday morning, Sandy Bolduc, Deirdre Brosnihan and Carla Danforth from Flood Control placed markers mapping out the landscape for plants and trees within the cienega.

Bolduc is the landscape architect, Brosnihan is the civil engineering manager and Danforth is the environmental planning manager.

According to Flood Control, there'll be about 600 plants and trees in the marshy area, all grown through the Pima County Native Plants Nursery.

Bolduc said the county's nursery is capable of providing plants that commercial nurseries in the Southwest don't grow.

"The Native Plant Nursery was created with a focus on restoration," she said. "It's a very specialized kind of a plant palate."

Brosnihan said Flood Control should finish placing the plants in January and then begin working with the county's Natural Resources, Parks and Recreation department to start the flood cycles of the cienega.

Transforming the dry landscape into a marshy habitat will take more than just plants and trees. The wetland area will be the product of scheduled flooding from intentional overfilling at the pond.

There is a spillway between the pond and the cienega that will release water into the marsh to artificially maintain the habitat.

The cienega uses rain harvesting to capture water during storms to bring water to the plants.

The addition of the cienega opens another habitat, Danforth said.

The wetland area will act as a habitat for shoreline birds and boost the already increasing variety found at Canoa Ranch since the addition of the pond.

The county also has plans to add a pollinator garden to the ranch that will attract more birds to the area.

Don't let the use of "garden" fool you into thinking the project will be small.

Danforth said the seven-acre garden would consist of a series of trails. Both the pond and cienega are about 2.5 acres each.

It won't just be the birders who will appreciate the new site.

Tucson Audubon Society's Johnathan Horst said the wetland would provide birds and the local environment with some much-needed habitat resiliency should anything happen to the Sweetwater Wetlands in Tucson. Horst is the director of conservation and research for the organization.

The Santa Cruz River Valley dried up in the late 1800s and early 1900s, taking many of the marshy habitats with it.

Horst said shoreline birds could make the trek from Sweetwater to habitats closer to the U.S.-Mexico border without any issues. But Green Valley provides a good halfway point in addition to the added insurance against losing other wetlands, he said.

"If something were to happen to Sweetwater, say it caught on fire, not during the spring intentional burn but happened to catch on fire in the fall, suddenly it would not be a migratory stopover point," he said.

Danforth said the community has seemed happy with the idea of the cienega at Canoa Ranch.

"They're very excited whenever we're out there working on this project," she said. "They look at the first project, the pond, and they're just thrilled. They just can't stop talking about it."

Danforth pointed to the increase in birding that has become popular at Canoa Ranch.

So far, Samoy said there has been plenty of confusion and curiosity about the project from residents who thought the county was building another pond or who were unfamiliar with a cienega.

Horst is among those looking forward to the addition.

"Once the cienega is done, Canoa Ranch as a whole is just going to be a phenomenal birding place," he said. "It stands to become one of the absolute premier birding sites for the area."

Had it not been for Pima County, visitors instead would be walking through yet another subdivision.