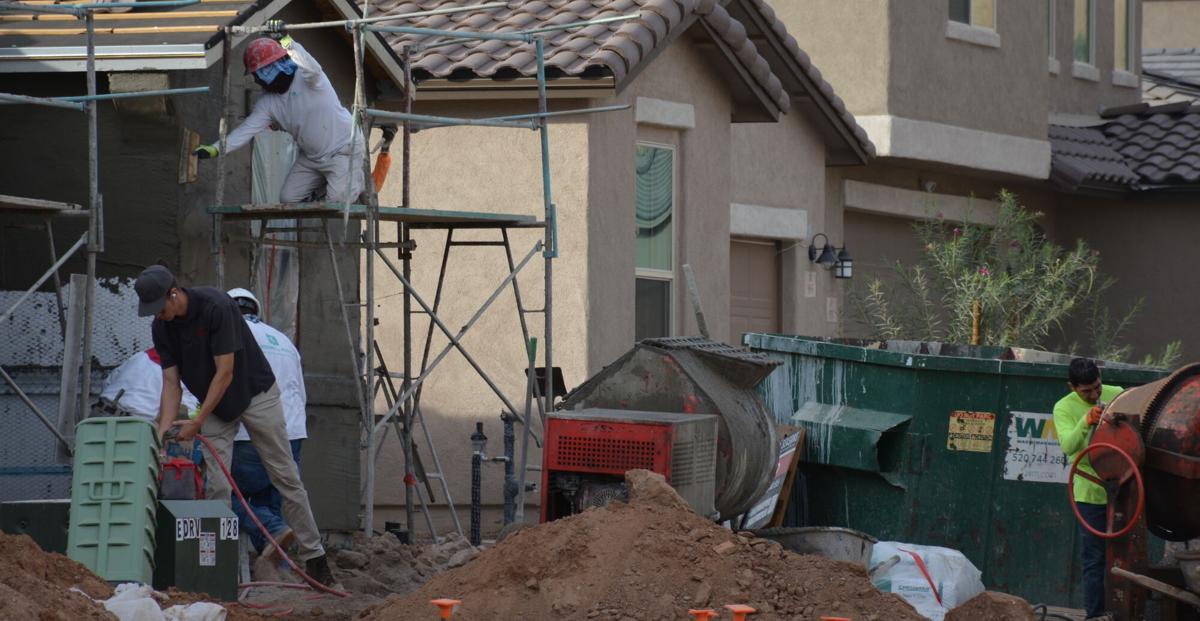 Crews build a house in Rancho Sahuarita as part of a new neighborhood near Fry's. 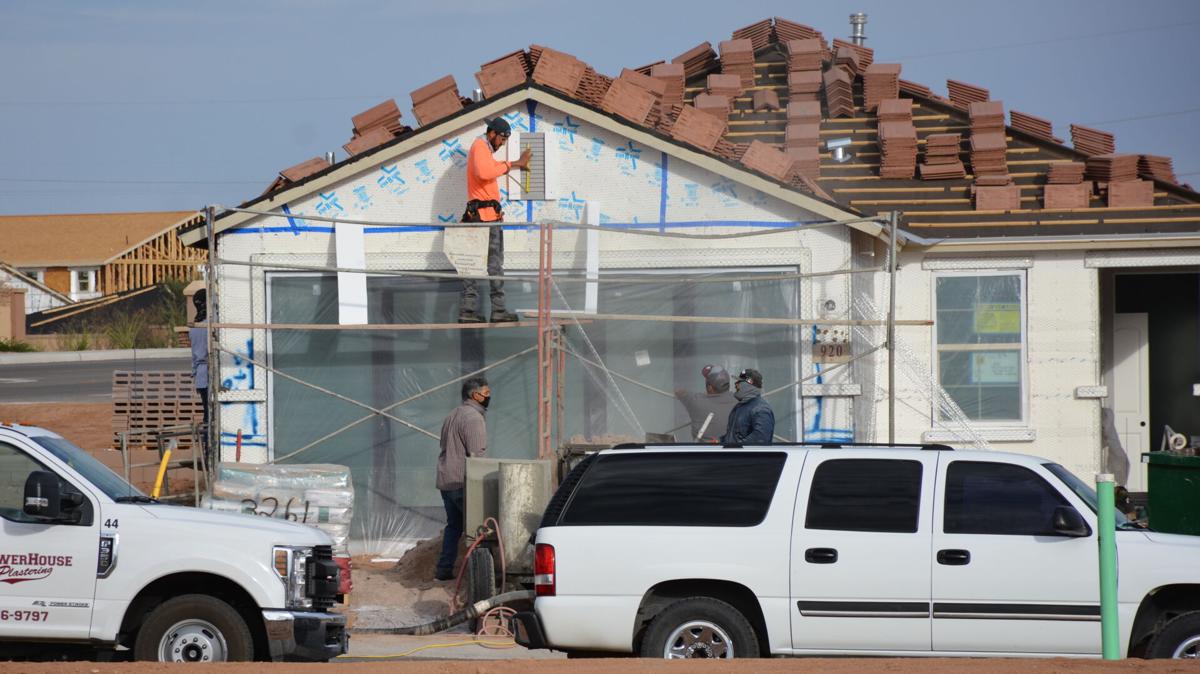 A new neighborhood going up just west of the satellite pool on Rancho Sahuarita Boulevard near Fry's. Many new homes developers sell directly to buyers are not factored into housing inventories.

Crews build a house in Rancho Sahuarita as part of a new neighborhood near Fry's.

A new neighborhood going up just west of the satellite pool on Rancho Sahuarita Boulevard near Fry's. Many new homes developers sell directly to buyers are not factored into housing inventories.

It's a seller's market out there, and with housing inventories low, Realtors say buyers should have patience, perseverance and flexibility when looking for a home.

Those numbers are slightly higher than the same period last year for Green Valley.

In Sahuarita, the 2019 numbers are slightly lower; there were 942 active listings and 665 homes sold from Jan. 1 through Nov.6.

He said doubling the current inventory would be getting into a regular market.

"The numbers are staying pretty steady, but there's stuff coming on and off constantly," he said.

Coldwell Banker's Laurie Lundeen said the  seller's market would likely last for some time in the area.

"Basic economics, supply and demand," she said. "When you don't have anything on your shelf to sell at the grocery store, there are more people who want the same products."

Stu Samovitz, with HomeSmart Pros, pointed to more people coming from California as a contributing factor.

U.S. Census Bureau data from 2017 showed about 661,000 people moved out of California, with Arizona being the second most popular destination – about 59,200 new arrivals.

The Census Bureau reported Arizona ranked third in percentage growth rate in 2019, with 120,693 new residents. Gov. Doug Ducey's office reported Arizona added about 548,304 residents since 2015. The state is growing so quickly it's expected to pick up another seat in Congress when fresh Census numbers come out.

Samovitz said the coronavirus pandemic is also playing a role in the low inventories.

Coldwell Banker's Trina Alberta found more winter visitors aren't going back and forth between Green Valley and out-of-state residences. She said reasons for staying in Green Valley year round vary — from avoiding wildfires to fleeing civil disruptions in urban centers.

Alberta said low-interest rates have also caused some winter visitors to opt-in to purchase a home and make Green Valley a permanent residence.

"The majority of my business is the higher-end in Green Valley, like $400,000 and up to $900,000, and I'm seeing a lot of activity on that end," she said. "It's really picking up from the past 10 or 12 years with people moving from California wanting a bigger house."

She said she has noticed Realtors also see increases in younger retirees and near-retired people moving into the area.

"So, of course, Pima County is a much less expensive place to live than other places," she said. "A lot of people have had second homes here and are familiar with it. So all of that is driving buyers and also the higher end."

Chancellor said having low inventory isn't necessarily bad, but there are some things buyers will notice.

"It just means there are few homes for sale, prices could be up a little bit, and you won't have the selection of homes," he said. "So what worries a buyer would be maybe they can't buy the perfect home. Maybe they might not find the home with the view and the three-car garage because they're just limited, and the prices go up a little bit on them."

Green Valley resident Shirley Martin's new home closed Nov. 4. A retired real estate broker, Martin said she knew what she was getting into about a year ago when she decided to buy a home as a remodel project to keep busy.

Martin had found one home with a for-sale sign but said it was sold when she called. She still had good luck with the house she purchased, but it took a quick reaction to land the deal. That, coupled with having a good agent, is her advice to other buyers.

Kaplan said both buyers and sellers need to prepare to move quickly on deals because homes could receive multiple offers.

"We did a survey with all our agents a couple of weeks ago; 77 percent on average had multiple offers," he said. "It's very commonplace to be in multiple offer situations, and you really need a good agent to guide you through that."

Lundeen said having an agent familiar with the area the buyer is searching for could help save time.

"Too many clients these days try to find it on their own, and that's why they're in this panic mode of they see a sign up and go, 'Oh, it will only take an hour to sell,'" she said. "Well, actually, it sold about two weeks ago."

Some homes could end up with offers before they end up on the public website as well, she said.

Green Valley resident Joe Ford started thinking about selling his home in Las Campanas last spring. He built the house in 2008, but he said he wanted to sell it and find a smaller place with less maintenance.

Ford went to Chancellor, who helped him sell his home.

"So we spent some time talking about pricing, positioning and that sort of thing, and came up with something we hoped would sell inside 60 days," he said. "And it sold in 30. So, we're very happy with the process."

The low inventories don't reflect new home construction. Some homes might end up in the inventory lists, while others are sold directly to buyers.

"That's a choice of the builders," Lundeen said. "I would say that the only new builds that I know that are going into the Multiple Listing Service, for the most part, are the builders here in Green Valley. Because they want the help of the agents."

However, she said builders in Sahuarita tend to have clients going in directly on their own and often without an agent representing them.

Kevin Kaplan of Long Realty said it's hard to isolate how new construction in Sahuarita plays into inventory.

"They have a very tight inventory situation there," he said.

While Sahuarita has plenty of new construction, Green Valley construction is limited to a few developments.

"The local builders aren't building like they used to," Chancellor said. "So, we don't see this influx of new homes being built, and we also see a lot more retirees coming this way."