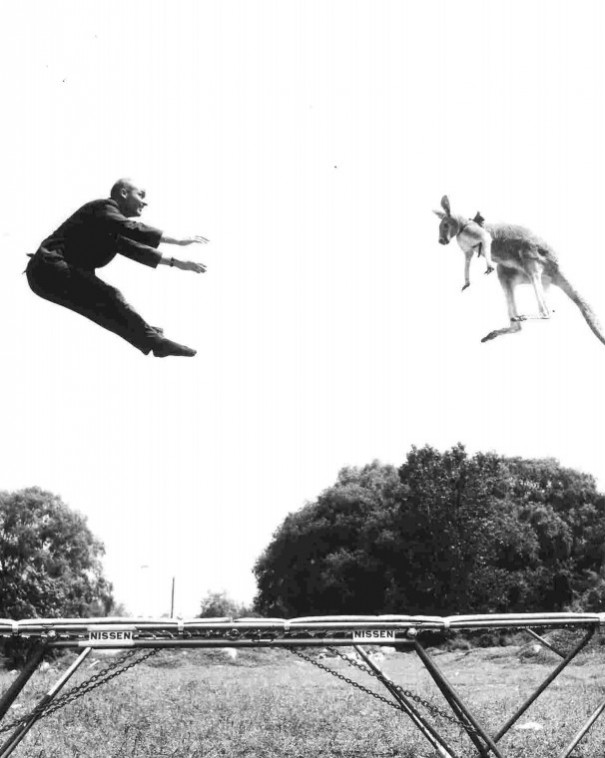 George Nissen rented a kangaroo for $100 in 1960 to help demonstrate his trampoline in New York City’s Central Park. 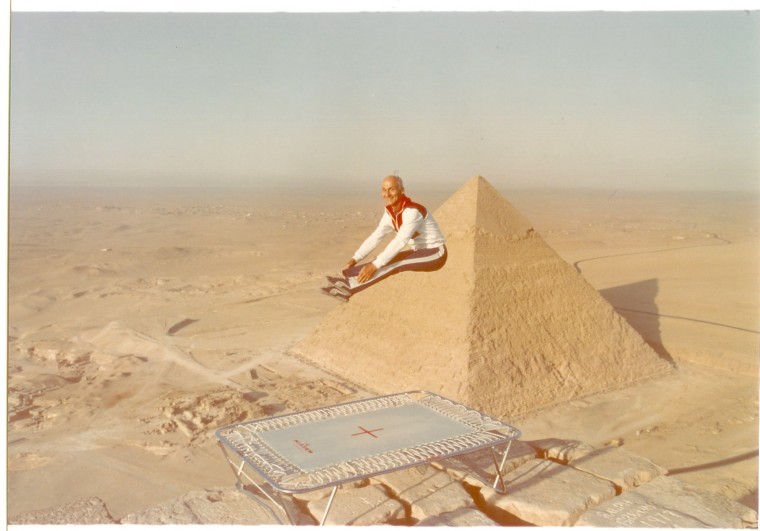 George Nissen performs on a Nissen trampoline atop the Giza Pyramid in Egypt during a promotional stunt in 1977.

George Nissen rented a kangaroo for $100 in 1960 to help demonstrate his trampoline in New York City’s Central Park.

George Nissen performs on a Nissen trampoline atop the Giza Pyramid in Egypt during a promotional stunt in 1977.

As fans of the summer Olympic Games eagerly await the opening ceremonies July 27 in London, Ron and Dagmar Munn will be glued to their television in Green Valley cheering on Team USA in the trampoline event, a sport made possible thanks to Dagmar’s father, trampoline inventor George Nissen.

The Munns said they will be rooting Aug. 3-4, for Steven Gluckstein and Savannah Vinsant, who finished first in the Olympic trampoline trials last month in San Diego.

“My father wanted this so much and just knowing that his memory lives on through his invention makes it all the more special for us,” Dagmar said.

Born in 1914 in Blairstown, Iowa, Nissen was intrigued early on by circus trapeze artists who capped off their performances by dropping into the safety nets below, much to the thrill of the audience.

It was his gymnastics involvement with the University of Iowa in the 1930s that changed his life. He and his coach, Larry Griswold, perfected what they termed a “bouncing rig” using a metal frame and canvas sheeting.

Later, Nissen joined two gymnasts to form a traveling acrobatics act called the Three Leonardos and took their show on the road across the Midwest, Texas and in to Mexico.

Eventually, Nissen constructed his first trampoline in a garage and trademarked the name “trampoline,” taken from his Spanish nickname “Campeón de Trampolin” or “Champion of the Diving Board,” given to him while on tour with the Three Leonardos.

In 1946, the Nissen Trampoline Company was formed with George’s brother, Paul, as vice president. Thanks to Nissen’s drive and tireless promotion, his portable bouncing invention became popular all over the world. Dagmar grew up traveling and bouncing in her family’s trampoline act, “The Nissens.”

“He was an inventor with over 100 patents, but he was also a dedicated husband, father and family man,” she said.

Nissen passed away April 7, 2010, at 96, but lived to see his lifelong dream fulfilled when the trampoline became an Olympic event at the 2000 Sydney Games. At 86, Nissen flew to Australia and was invited to jump on the trampoline to the delight of the Olympic athletes.

“Dad was very proud to be there when the first trampoline competition happened in Sydney,” Dagmar said. “While some sports are Olympic staples, very few new ones get the chance to be added to the program. Dad had the insight to know that it was more then a circus act.”

Dagmar said her father devoted his life to promoting and manufacturing the trampoline — no matter what it took.

On one occasion, in the summer of 1960, Nissen rented a kangaroo in New York City and taught it to bounce on a trampoline. The photo of Nissen and the kangaroo in mid-air hit the cover of magazines around the world.

Nissen hired trampoline champ Ron Munn in the early 1970s to help promote the trampoline and Spaceball — another of his inventions using a trampoline and a net — to schools. Munn later married Dagmar and became director of international sales and marketing for the Nissen Company.

“The trampoline was real popular at one time and the schools used it as part of fitness programs,” Munn said. “Now, trampolining is pretty much done in clubs who specialize in it, like gymnastics. It’s all a club activity with coaches.”

Munn, 71, won the 1956 National Amateur Athletic Union trampoline title as a 15-year-old high school sophomore and again as a freshman on the University of Michigan gymnastics team in 1959. He was also named a member of the AAU All-American Gymnastics Team, and in 1959 won the gold medal in trampoline at the Pan American Games.

Munn said he got his start in sixth grade, thanks to a Nissen trampoline.

“I grew up in Amarillo, Texas, and a family across the street from my school had a Nissen trampoline in their backyard,” Munn recalled. “As soon as I saw it, I wanted to climb their picket fence when they weren’t home to try it out.”

Munn said that in the seventh grade, he met Nard Cazzell, who opened a trampoline club in Amarillo with two Nissen trampolines.

“Nard went around to schools giving demonstrations in hopes that he could increase the number of students in his club,” Munn said. “I convinced my parents to pay for lessons for one month and I was there every day and continued to take lessons after that. Nard taught me everything I know about the mechanics of acrobatics and how they applied to the trampoline.”

Munn said it was his association with Nissen that made his career “exciting beyond belief.”

Munn recalled one promotional stunt in 1977 that made headlines when he and Nissen scaled the Great Pyramid of Giza in Egypt in the middle of the night with a small trampoline.

“It was George’s goal to jump on a trampoline on top of a pyramid,” Munn said. “And when George put he mind to something, you can be sure it got done.”

When the sun came up, they bounced for the world to see.

“What was really funny is when we got up on top there were two students from Canada in sleeping bags already up there,” Munn said. “They did take our photo, though, and we found out much later that one of them sold it to a magazine.”

When the two descended from the pyramid, the director of Egyptian antiquities was waiting.

“The group was not too happy and they had drawn their guns,” Dagmar said. “My dad had to talk his way out of being arrested with a ten-dollar bill, and it worked.”

With the spotlight shining on the 2012 Summer Olympics, Dagmar Nissen Munn has written a book about her father’s colorful life, “My Father’s Dream of an Olympic Trampoline: Life Story of George Nissen, Inventor of the Trampoline.”