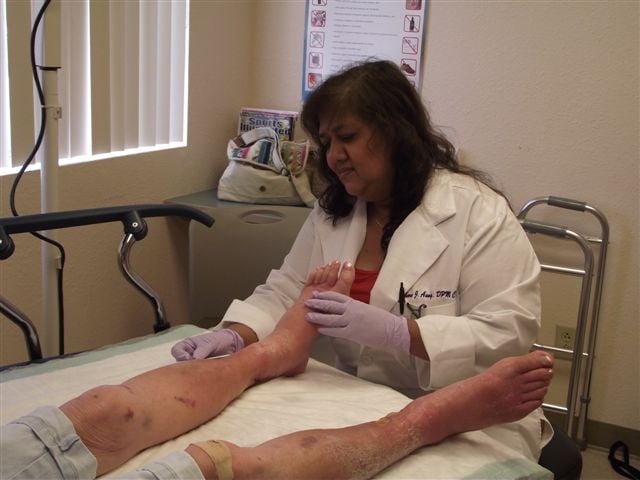 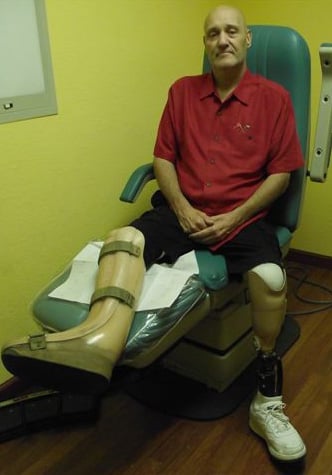 John Diener’s left leg was amputated below the knee because of MRSA.

John Diener’s left leg was amputated below the knee because of MRSA.

The new treatments range from using neo-natal cells from the foreskins of circumcised infants to hyberbaric chambers that feed pure oxygen into wounds.

Now a doctor is trying to get the word out through the Save a Leg, Save a Life Foundation, whose goal is to educate lay people, physicians and researchers. The group will hold a meet-and-greet meeting Thursday in Tucson.

New treatments use protocols established by the Wound Care Association and Wound Healing Society and are for patients of all backgrounds, from diabetics to soldiers injured in war.

Dr. Barbara Aung, a podiatric physician and surgeon at St. Mary’s Hospital and St. Joseph’s Medical Center, said it’s important for patients to be aware of the latest technology and to ask their physician about new treatments and options. Aung said 30 percent of diabetic wounds lead to amputation and 47 percent of patients who have an amputation die within five years.

John Diener, 56, of Tucson had his left leg amputated below the knee from a MRSA infection in 2004. A year later, he developed diabetes, and in June 2009 an ulcer developed on his right foot. Three doctors advised amputating his right leg; Diener held off.

Diener now sees Aung every four months, and says she was the only doctor willing to work to continue saving his leg. He wears a support for his right leg, but Diener still drives, shops and walks.

“The cells emulate wherever you put it,” he said.

At St. Mary’s Hospital Wound Care Center, some patients are treated in a hyperbaric chamber.

Hyperbaric technician John Furgason said the chamber infuses the body with 100 percent pure oxygen that dissolves into the plasma and body tissues. Patients are treated five successive days and receive 20 to 60 treatments.

One patient is a woman in her 70s who developed multiple wounds on both legs following heart surgery. At regular visits, Aung measures the length and diameter of each wound to track healing.

“The sooner wounds are treated the better options are for limb salvage,” she said.

The goal at the Wound Care Center is to keep amputations under two percent of the number of patients, which averages 100 a month. For July, the number was 1.5 percent.