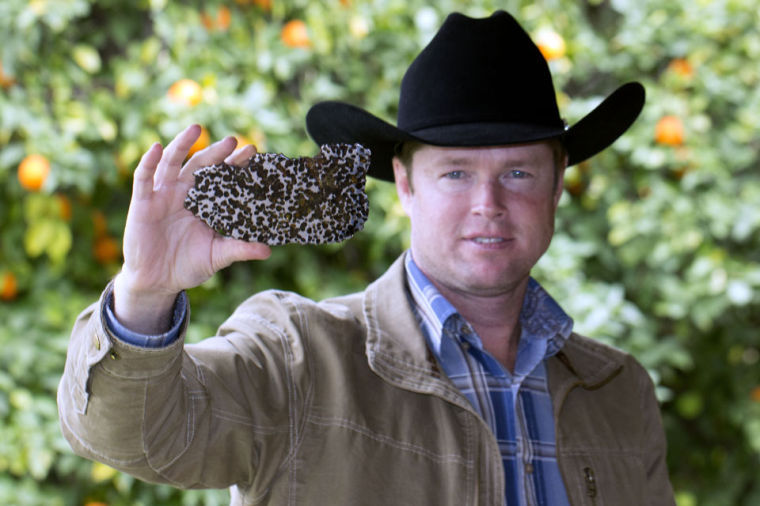 Robert Ward holds a polished section from the stony-iron meteorite he collected at the Springwater pallasite strewn field in Canada. 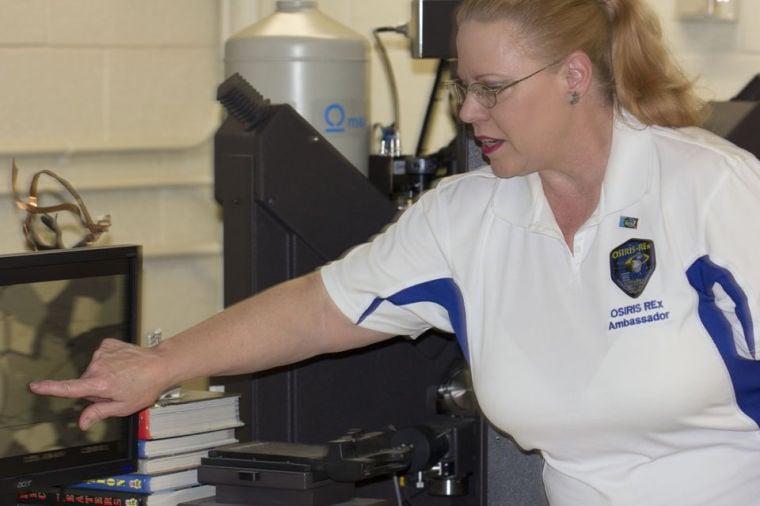 Dolores Hill, Senior Research Specialist with the University of Arizona Lunar and Planetary Laboratory in Tucson, explains how the microprobe analyzes meteorite composition.

Robert Ward holds a polished section from the stony-iron meteorite he collected at the Springwater pallasite strewn field in Canada.

Dolores Hill, Senior Research Specialist with the University of Arizona Lunar and Planetary Laboratory in Tucson, explains how the microprobe analyzes meteorite composition.

The object from space hurtled toward Earth. As it entered the atmosphere, the object began to burn, producing a fireball. With a sonic boom and a ground-shaking thud, the meteorite came to ground somewhere in Southern Arizona on Dec. 11, 2013, at about 7:11 p.m.

Robert W. Ward was alerted almost immediately. Fresh game was afoot, and he had to find the new fall. “It’s like Storm Chasers,” says Ward, referring to the Discovery Channel series, “but there’s a pot of gold at the end of the rainbow.”

Ward, 37, is a meteorite hunter from Prescott.

“Pretty much self-taught,” he says. Tall and lean, with an easy manner and affable smile, Ward can often be found beneath a black cowboy hat. The son of parents with experience in rock collecting and big game hunting, Ward inherited the right stuff to be a hunter of rocks from outer space.

Ward, who grew up near Bullhead City in northwestern Arizona, recounts how his fascination with meteorites began. When he was about 10 years old, he saw a fireball in the sky. A dark object descended from the fireball and Ward knew it must have landed somewhere. The following day, he read everything he could get his hands on about meteors and meteorites.

Ward’s parents frequently took him to the gem and mineral show in Quartzsite. It was there where Ward met several real life meteor hunters and bought his first meteorite. Before he knew it, he was out hunting for his own meteorites. He was hooked.

The objects Ward hunts, called meteorites only after they strike Earth, come primarily from an asteroid belt that orbits the sun between Mars and Jupiter, says Anne Black, a dealer in rare, historic meteorites and owner of the business Impactika. A few meteorites, she says, come from the moon or Mars, sent into space eons ago by ancient extraterrestrial explosions.

When people ask Black if the annual Perseid and Leonid meteor showers produce meteorites, she explains that the dust and ice given off during a meteor shower originates from an ancient comet. This debris is visible as a meteor when Earth passes through the comet’s icy trail, but disintegrates before it can fall to Earth.

In town for the 60th Tucson Gem and Mineral Show, Black, past-president of the International Meteorite Collectors Association, says there are three basic types of meteorites: irons, stony and stony irons.

Irons are heavy, dense meteorites that might be the once-molten remains of ancient asteroids. They contain iron and nickel and can be difficult to detach from a magnet.

Stony meteorites include the chondrites, which also contain iron and are attracted to magnets, but they have something more — tiny spheres or “chondrules” of primarily silicate minerals such as olivine, a green mineral similar to our earthbound gem peridot. The best way to visualize these chondrules is under a microscope. Meteorites from the moon and Mars are stony meteorites without chondrules.

The stony irons, also attracted to magnets, contain a nearly equal amount of nickel-iron alloy and silicates such as olivine. When sliced and polished, stony irons are among the most beautiful of meteorites.

Recently fallen meteorites often have a “fusion crust” on the outside, a black, ash-like skin caused by the melting of the meteorite’s surface as it passes through Earth’s atmosphere.

Earth rocks can resemble meteorites. Hopeful hunters often bring these “meteorwrongs” to Black and Ward, hoping that that the rocks are from outer space. Slag, lava, magnetite and hematite are examples of common meteorwrongs, according to the experts.

Ward is familiar with all of the types and subtypes of meteorites. He found more than 500 separate falls and thousands of meteorites within the strewn field of each fall. Ward confesses that he’s found a few meteorwrongs in his career, too.

While not formally educated in the science of space rocks, Ward is quite knowledgeable. A number of his finds — all meteorites — are on display at the gem show in Tucson.

Meteorites can range in price from $50 to more than $400,000. It can be an expensive hobby, but it’s possible for beginning collectors to find small, inexpensive samples of many common meteorites, especially at Tucson’s annual gem show.

To verify that a rock is a meteorite requires an expert. Once verified, a meteorite can be named and formally classified by the Nomenclature Committee of the Meteoritical Society.

Dolores H. Hill, a senior research specialist with the University of Arizona Lunar and Planetary Laboratory, is just such an expert. Hill, co-lead of OSIRIS-REx Target Asteroids!, is a meteorite specialist and a strong advocate for scientific outreach and citizen science.

In a Kuiper Space Science Building laboratory on the University of Arizona campus are some of the tools of Hill’s trade — two electron microprobes. Hill uses these microprobes to examine meteorites for their elemental components.

To verity the composition of a possible meteorite, Hill places a thin section of the material in a microprobe. A focused beam of high-energy electrons bombards the sample, producing a characteristic X-ray pattern. The X-ray pattern of the sample is compared to the X-ray patterns of known elements. Meteorites, composed of distinct combinations of known elements, are easily identified using this process. At about $500 for a microprobe analysis, the cost can be prohibitive. For that reason, Hill only analyzes strong meteorite candidates.

According to Douglas G. Schmitt, a Vancouver, British Columbia, maritime lawyer who also studies and writes about meteorite law, ownership of a meteorite is determined by “the law of the place of the find.”

“The United States courts have held that a find is owned by the landowner,” Schmitt says.

Scott E. Foss, Ph.D., senior paleontologist with the BLM, says this policy will be in effect until at least Sept. 20, 2016.

Meteorite law is complicated, and the dangers of running afoul of that law can be serious, especially when a meteorite hunter travels internationally to search for space rocks.

In 2011, Ward and fellow hunter Michael Farmer were arrested, convicted and imprisoned for illegal mining in Oman.

For 54 days, Ward and Farmer remained in custody until their attorney convinced an Omani judge to release them. The meteor hunters weren’t mining, the attorney argued, they were merely picking up objects from the surface of the Earth.

According to Ward, “There was nothing about picking stuff off the ground. If that were the case, every 12-year-old by would be a miner.”

Controversies among academic meteorite researchers and meteorite collectors occasionally erupt as in the case of a scientist quoted by the New York Times calling the meteorite trade “a black market … as organized as any drug trade and just as illegal.”

Black was upset by the description and wrote a scathing rebuttal.

The scientist, Case Western Reserve University Associate Professor Ralph P. Harvey, now says he was referring not to the meteorite trade in general, but to the 1980s and 1990s in northwest Africa and the Middle East where the meteorite trade was “like the Wild West.”

“It wasn’t meant to reflect how people are operating today,” says Harvey. “We (collectors and scientists) have to learn how to strike that balance.”

In Arizona, the relationship between collectors and scientists is usually collegial. “We have a very cooperative collaboration because we need each other,” says meteorite expert Hill. “We need them to bring samples to us which we would not otherwise get, especially fresh falls, and they need us to authenticate and classify the meteorites.”

In the days following the Dec. 11, 2013, fall, Ward was convinced that the meteorite struck the earth in the Tucson/Oro Valley area. Now, after consulting a doppler radar specialist and speaking to additional witnesses, Ward believes the meteorite probably fell a little south of Red Rock, somewhere near the Silver Bell Mountains. Ward plans to assemble a meteorite search team to do more hunting in a week or so.

If and when he finds the new fall, Ward says he will make sure that the meteorite is properly identified, verified and catalogued.

“My first and foremost ambition is to preserve the material, and see that it’s curated for scientific purposes,” Ward says. There’s every reason to think that Ward will preserve meteorites from the recent fall if he finds them. In spite of his black hat, Ward is “one of the good guys,” says Hill.

The language of meteorites

Meteor: The visual, atmospheric effect of extraterrestrial debris burning up as it enters Earth’s atmosphere.

Meteoroid: A piece of extraterrestrial debris of stone or metal; a potential meteorite.

Meteorite: Any portion of a meteoroid that does not burn, but falls to the ground.

Meteorite fall: A meteorite collected shortly after a fall from space that was observed by witnesses or registered by a scientific device.

Meteorite find: A meteorite collected after a fall from space that was not witnessed, might be old and weathered.

Strewn field: An area on the ground where meteorites from the same fall landed.