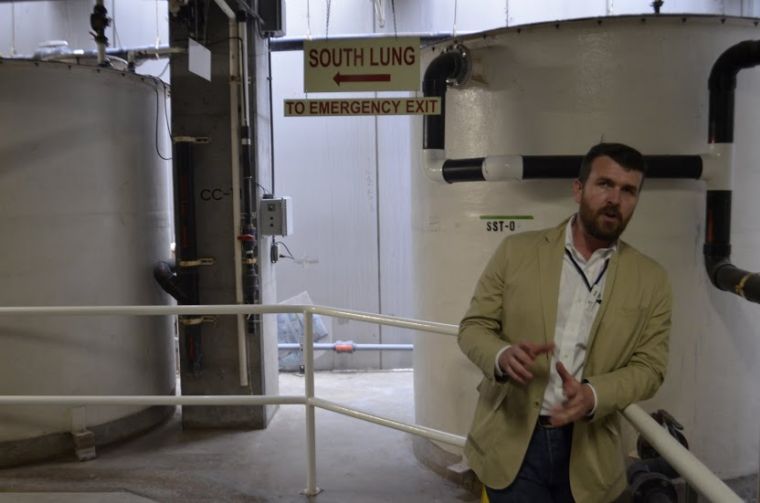 Nate Allen, who manages sustainability research and demonstration programs at the Biosphere, takes a reporter to parts the public rarely sees. 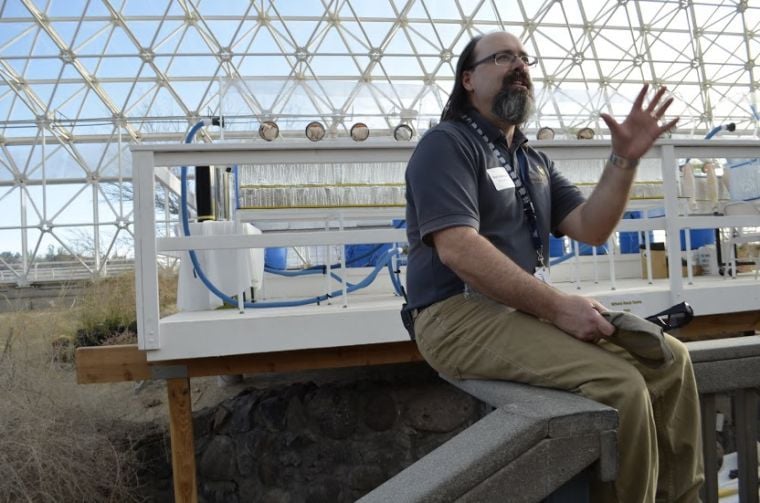 Biosphere II looms big behind Matt Adamson, who has worked there more than 20 years.

Nate Allen, who manages sustainability research and demonstration programs at the Biosphere, takes a reporter to parts the public rarely sees.

Biosphere II looms big behind Matt Adamson, who has worked there more than 20 years.

More than two decades ago, eight people entered a sealed, self-sustaining glass enclosure near Oracle called Biosphere 2. For two years, the Biospherians, as they were called, lived almost exclusively off the complex’s various biomes — mini-ecosystems like savanna, rain forest and wetlands — that represented various Earth climates.

Only energy and information were to be exchanged with the outside world. That included sunlight, electricity and communications with a support staff. Food was grown on site. Oxygen and carbon dioxide were regulated through photosynthesis. The goal: Show that future space colonists could survive and thrive in similar environments on deep space missions or planetary colonies.

It didn’t all go according to plan.

Controversies ranging from supplemental oxygen to opened airlocks swirled around the original two missions. Today, most of the people inside the Biosphere at any given time are the photo-snapping tourists who stream through the biomes.

That doesn’t mean Biosphere 2, now owned by the University of Arizona, isn’t still in the business of cutting-edge scientific research. For instance, there’s the Landscape Evolution Observatory, a long-term experiment designed to investigate how our planet’s landscapes evolve over time. Another ongoing simulation is the model city project, which examines energy and water conservation.

But beneath the biomes, less has changed. The ghosts of researchers past roam the concrete tunnels known as the Technosphere. Biosphere 2’s survival continues to depend on this technological curiosity, just as it did in the 1990s.

“You’re off the tour path now,” says Nate Allen, who coordinates and manages sustainability research and demonstration programs at the Biosphere north of Tucson.

In the middle of the savanna biome, Allen has just unhooked a rope restricting access to a spiral staircase leading into the Technosphere. As he descends, he explains that engineers designing the Biosphere needed a way to counteract drastic swings in temperature caused by Southern Arizona’s hot days and cool nights.

But how? Traditional heating, ventilation and air conditioning (HVAC) systems were out of the question, since air and water from the outside world were not permitted to enter the Biosphere.

The answer begins in two 800-foot wells that dip into a nearby aquifer. At the Biosphere’s Energy Center, which is not a part of the sealed environment, the well water can be heated or cooled.

Heating is accomplished via a boiler. For cooling, there’s a set of evaporative cooling towers. Locals know evaporative coolers by another name: swamp coolers, which dot the roofs of Arizona homes.

“It’s exactly like that,” Allen says, “except it’s four stories high, and there’s three of them.”

Water needing to be cooled even further is sent through a mechanical chiller and into a storage tank, which is “like a giant cooler full of those little blue plates that you put in your lunch box.”

The hot, cool or chilled water snakes through pipes from the Energy Center to the Technosphere. Since it can’t intermingle with the air and water inside the Biosphere, it stays securely in pipes that travel through massive air handlers under each biome. There, internal Biosphere air blows across the pipes and changes temperature relative to the water before being drawn back into the biomes through large grates.

“It’s a heat exchange,” Allen says, “a closed loop.” The water is sent back to the Energy Center, and the cycle begins again. Even though the Biosphere’s outside hatch was flung open long ago, the sealed HVAC system continues to maintain the delicate atmosphere each biome requires.

Just a short walk from the Biosphere stands the Energy Center — five arched buildings with large portholes. The odd tan structures look simultaneously out of place and right at home amid the Biosphere’s other futuristic structures. From here, operators like veteran Charley Gates monitor the weather in each biome and make changes accordingly.

Gates has worked at the Biosphere since 1990, and predates the original Biospherians. He swivels slowly in his chair, flanked by a semicircle of computer monitors as he rattles off the specifications of the site’s power generators and storage tanks. Not only is he astonishingly fluent in Biosphere-speak, but Gates is also a “medic, reptile handler and courtesy driver,” as he puts it.

Because no outside water was allowed to enter the Biosphere, original crew members had to be creative with water recycling. They collected condensation from unusual places, including the Biosphere’s windows and air handling units.

“Each of one of those air handling units have a condensate collection system,” Gates says, “where water that comes off the coils goes into a giant sump pump.” From there, a purification system created potable water for the occupants.

The water recycling system is now a relic from a bygone era. Today’s scientists usually want the purest possible water for their experiments. Thus, when water in the runoff storage tank reaches a certain level, Gates says, “I’ll turn the pump on, and I just pump that into the wash.”

Matt Adamson flashes a wide smile as he walks slowly down a long, circular tunnel deep within the Technosphere. The Biosphere 2 education and outreach coordinator is leading the way to one of two massive air chambers known as the lungs. From the outside, the lungs’ dimpled white surfaces look like giant golf balls sunk into the countryside.

Despite their name, they don’t really help the Biosphere breathe. Quite the contrary, since outside air was not supposed to enter the complex. The lungs’ purpose is to expand and contract as the air pressure inside the Biosphere rises and falls.

“Imagine you’re building this,” Adamson says, “and you don’t want any air exchanged with the outside world. And you’re in the Sonoran Desert, and that air is heated up dramatically every day. You’re going to have significant pressure building up.”

The tunnel opens into a cavernous, cylindrical room. A rubber membrane rings the ceiling, connecting the walls to a circular concrete slab suspended in the center of the lung. As pressure in Biosphere 2 increases, the rubber expands, raising the slab. Conversely, when pressure drops, the rubber sags. The entire system is enclosed within the golf ball exterior.

“The architects considered this their biggest engineering achievement,” Adamson says. Thanks to the Biosphere’s lungs, “the air expanded and contracted daily without any of it being lost to the outside world.”

But first, Adamson turns back to point out another artifact from the original missions: a window, perhaps 4 feet high by 3 feet wide. A telephone on each side allowed the Biospherians to enjoy private conversations with loved ones. The stark, sterile surroundings give the scene an eerie, prisonlike feel.

For the original inhabitants, Biosphere 2 was meant to be more like paradise than a prison. It was a living, breathing physical and social science experiment that tested the human spirit. Today, researchers at the complex continue to explore the evolution of our world, but for better or worse, the Biosphere’s future may always be tied to its enigmatic past.