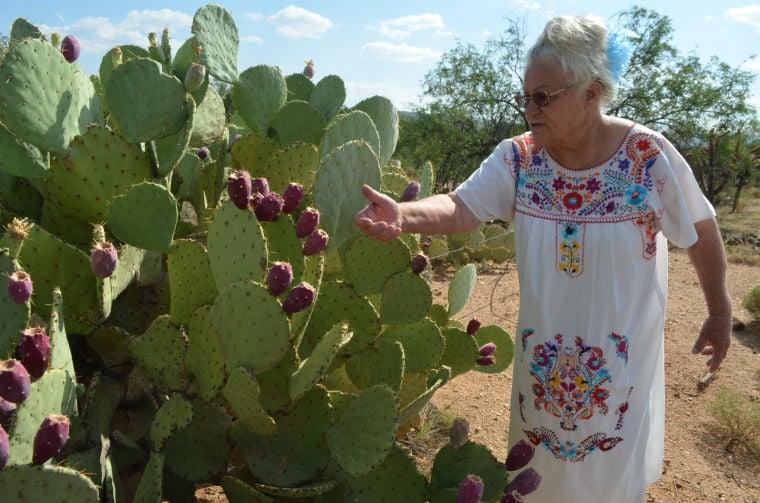 Natalie McGee with an Engelmanni-variety plant with ripe fruit about ready to fall off, Thursday near South Mission Road west of Green Valley and Sahuarita. 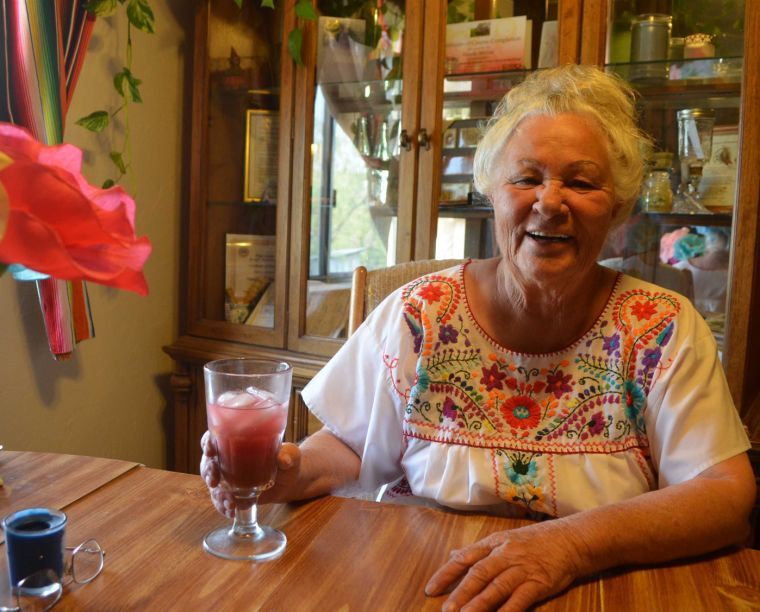 Natalie McGee refreshes on an afternoon break at home during a high-production season of harvesting prickly pear, with an icy concoction of the fruit nectar, agave syrup and lime juice.

Natalie McGee with an Engelmanni-variety plant with ripe fruit about ready to fall off, Thursday near South Mission Road west of Green Valley and Sahuarita.

Natalie McGee refreshes on an afternoon break at home during a high-production season of harvesting prickly pear, with an icy concoction of the fruit nectar, agave syrup and lime juice.

Good winter rain and the recent heat have combined to create an early and projected bumper crop for one of the desert's showiest producers this time of year, the prickly pear.

Natalie McGee of Green Valley has been patiently waiting for a variety known as Engelmanni. It's one of 650 varieties worldwide — 350 in the United States — and is prized for its low sugar content. Here it grows wild, and prolifically.

At altitudes below about 3,000 feet, it's ripening about a month ahead of normal, and McGee's helpers are plucking it up with tongs and collecting it in buckets headed for her Tucson processing kitchen, where “juice is flying.”

For 23 years, she's been churning out bottles of the rich, flavorful, purplish-red nectar and jars of jams and spreads, and capitalizing on the prickly pear's natural attributes. Her Arizona Cactus Ranch brand contains only juice, no water or sugar added.

McGee said she has seen lean years where the fruit isn't as juicy, or plants produce fewer pears, and years such as this with “a trillion, big, fat juicy ones.”

Long a staple and symbol of Mexican, Native American and other cultures, the fruit has more recently caught the attention of scientific research and shown promising and far-reaching health benefits. McGee gets calls from places around the world such as Algeria and Sudan, inquiring how to make prickly pear fruit leather for nutrition, health and economic advantage to the poor.

Her customer base includes England, Korea and Tel Aviv. She's hopeful the prickly pear may have application to help prevent cervical cancer, prevalent in India.

A retired social worker who took up harvesting the fruit on family acreage in 1991, McGee makes well more than enough to support herself and lives modestly, even built much of her own cabin-like home and pays relatives to pick fruit. Her thing is improving life for others.

“I run this business like a social worker rather than a business, not to make millions,” she said. “I want to help millions of people.”

She's out to spread the word about the virtuous and tasty prickly pear. “It's abundant, and free.”

It's too soon to tell what this year's harvest will yield, but typically she gets enough to keep 100 freezer pallets stocked with hundreds of gallons of the nectar for year-round bottling. According to the USDA Nutrient Database, prickly pears are a source of Vitamin C, fiber, and magnesium.

Known to Mexican, Native American and possibly other cultures for thousands of years, the prickly pear plant with its paddle-like “leaves” — nopales in Spanish — has been used medicinally. These days, juice of the fruit helps treat type 2 diabetes, high cholesterol, obesity and alcohol hangover. McGee's products have been featured on the Dr. Oz show touting the plant as a natural cancer preventative, based on recent research. Studies of its various properties, content and health-supporting potential are ongoing.

It's used in the nearby Pascua Yaqui Tribe's Alternative Medicine/Diabetes Program, and in many recipes, including those served at the Desert Rain Cafe in Sells on the San Xavier Indian Reservation.

McGee spent her early years on ranch land west of Sahuarita, where she and family made prickly pear jelly.

Later, as a social worker in Los Angeles County, McGee oversaw numerous child welfare cases, among them Charles Manson's, “my easiest,” she said. She also helped lay groundwork for the independent living movement, establishing the California Association of the Physically Handicapped and getting sign language legalized in the U.S.

“It took a lot of effort, but for the deaf, life has gone from dark days to bright, bright days.”

When she returned to her Arizona roots and took up with the prickly pears, she started selling her products at a small produce stand at Green Valley Village, where patrons reported improvements to their health and encouraged her to continue. Her brand is still marketed at Annie's Cupboard in the village, and DaZee's Hands of a Friend Resale Shop in Green Valley, where McGee helps victims of domestic violence.

Over the years, the business has grown to provide a six-figure income.

“What a gift that I happened to be on this big old ranch and found something to share,” she said.

At 75, she's not slowing. McGee, who also serves as a Pima County's Sheriff's Auxiliary Volunteer, would like to write some books, one titled, “My Journey in Signs,” gleaning what she learned and books collected from world travels about sign language for the deaf, one of her early passions in helping the disadvantaged. She's found a correlation between the many hand signs used for “feelings” and the varying parts of the body with which specific regions or cultures have the most medical issues.

“I've found consistency,” she said. “While it's too late for me to do all the research, I would like to throw out the concept for people to study.”

That may still need to fit in between harvesting the thorny plants with a high return and helping her local community.

• Diverse: with 650 varieties, fruits can range from red, wine, orange, yellow to green.

• Celebrated: Valtierrilla in central Mexico is the capitol of prickly pear production., and hosts a yearly Exponopal featuring stew, tortillas, shampoo, candy, skin creams and more, all made with cactus derivatives.

• Hated: Exported to Australia in the 18th century for gardens and later used for livestock fencing, the plants grew invasive, driving farmers off their land and crushing homes. Moth larvae from South America, which eat the plant, eliminated the “green hell” and is still memorialized.

• Peddled: Throughout the Middle East, the plants grow in otherwise non-cultivable land and fruit sold by summer street vendors.

• Dye lives: Use of a dye made from the cochineal, a scale insect and prickly pear parasite, is being revived due to health concerns over artificial additives. Natural enemies had diminished its numbers.

• Eaten: The fruit is a main ingredient in a popular Christmas beverage in the British Virgin Islands. The plant has also been used by Mexican natives to make colonche, an alcoholic drink; at least two commercially distilled spirits are produced from the fruit, and it is a popular flavoring in margaritas.

• Revered: Mexico's coat of arms depicts a golden eagle perched on a prickly pear cactus, holding a rattlesnake, inspired by an Aztec legend. The cactus represents Palestinian struggle for freedom in oral and literary history, has marked boundaries of family lands, and is renowned in song.

• To the point: An eight-mile “Cactus Curtain” surrounding Guantanamo Bay Naval Base was planted by Cuban troops in 1961 to stop Cubans from taking refuge in the U.S.