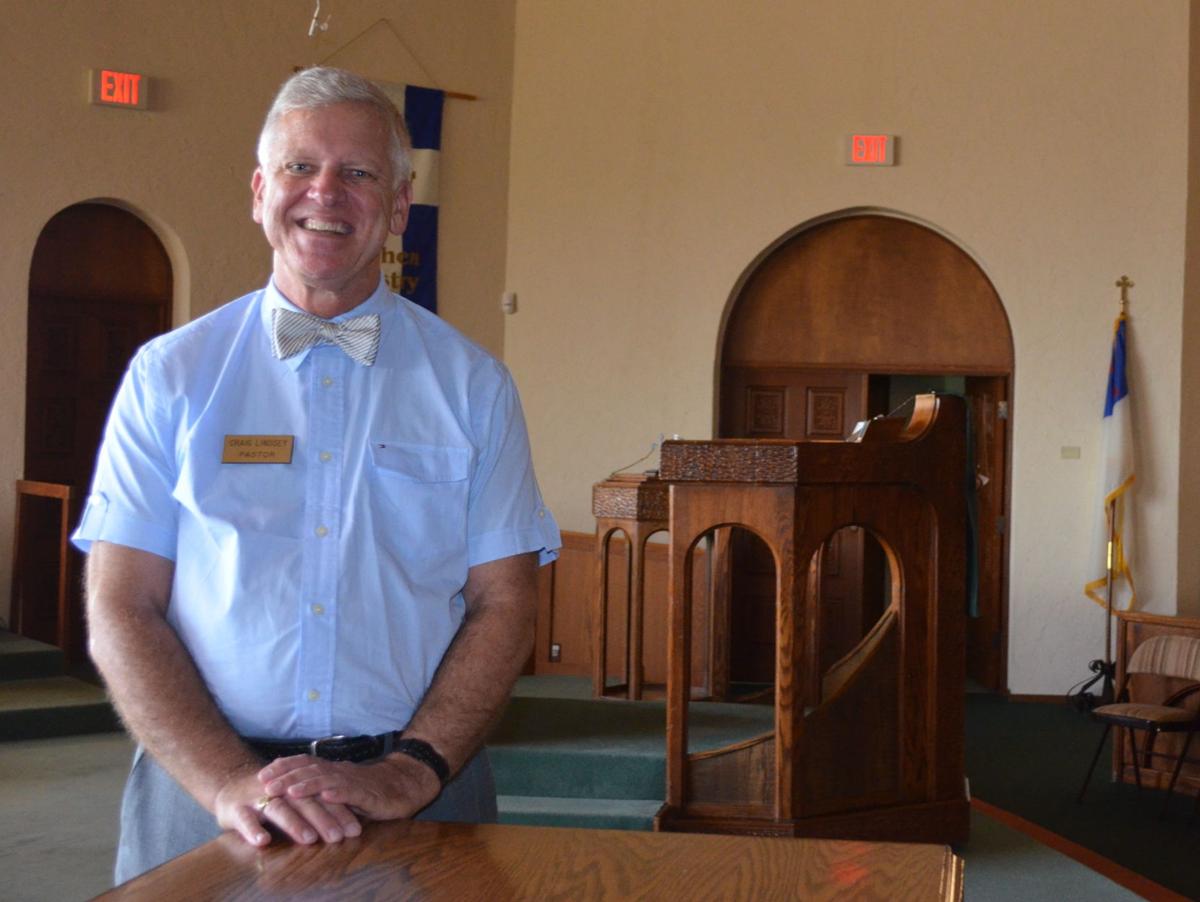 The Rev. Craig Lindsey will preach his first sermon Oct. 6 as new minister at Valley Presbyterian Church in Green Valley.

The Rev. Craig Lindsey will preach his first sermon Oct. 6 as new minister at Valley Presbyterian Church in Green Valley.

Some church members got a call late that Friday night, others didn’t hear the news until the next day.

Many saw it for the first time on the front page of their newspaper Sunday morning: “Pastor dies of self-inflicted gunshot at Sahuarita park.”

The Rev. Larry DeLong, minister at Valley Presbyterian Church for more than seven years, had killed himself.

The suicide left one of Green Valley’s largest congregations stunned and launched a three-year journey of introspection, brutal honesty and a church-wide commitment to make changes.

The congregation takes its next step today. For the first time since August 2016, Valley Presbyterian Church has a permanent pastor. His first sermon is this morning (Oct. 6).

At six-foot-six, Larry DeLong was an imposing figure with an engaging smile. He had arrived in Green Valley in February 2009 to oversee a congregation of about 1,200 after retiring as a Navy chaplain in the 1990s. He had studied music composition and voice in college and hoped to sing in the choir on occasion. He asked people to call him Larry.

But just a few years later, and for lots of reasons, the congregation had dropped to about half that size and had been swallowed up in conflict and power struggles. A church split had seen 200 people leave overnight. Regional leaders had recently sent in support to help the church sort through its issues.

DeLong, who had told friends he was depressed, was finishing up a weeklong vacation when he drove to a park near the entrance to Quail Creek on Aug. 26, 2016, and shot himself. He was 60.

She had come to Valley Presbyterian Church as Minister of Discipleship not long after he arrived, and they were close.

“Everybody was in such shock,” she said. “The first reaction was guilt. People were asking the question, ‘What could we have done?’ or, ‘Why did I say that or why did I not say that?’ That’s the first thing we had to deal with.”

She and Paul Phillips, Pastor of Care at the time, spent Saturday rearranging the entire service, from the liturgy to the music.

The national PDA — Presbyterian Disaster Assistance — arrived Sunday and brought grief counselors. Twenty-five Presbyterian leaders in the Tucson area came forward during the service to show their support. Christopher and Phillips stood side-by-side and led the service together.

“We just worshiped God,” she recalled. “That’s what we were there for… It was really beautiful and I think it’s what everybody needed.”

The church spent much of the next year mourning and was losing members every week “because they couldn’t stand that grief, which I understand totally,” Christopher said.

“We didn’t know if the church was going to survive. Was God going to ever use us again?”

In early 2017, the church called an interim pastor, Mark Medina, who specializes in stepping in when congregations are in crisis.

After months of grieving the church was better prepared to focus and took its first steps on what would be a grueling journey.

JAG — the Journey Ahead Group — formed in April 2017 with six church members. The stated goal, in its own words, was to address “long-existing ‘unhealthy behaviors’ within the Church.”

The group delivered its report in March 2018, heavy on input from the congregation and pulling no punches when it came to identifying problems and recommending a rigid path to moving on.

“This church has a history of being hard on their head pastor,” Christopher said. “It’s a behavior that needed to change.”

Eloise Fredrickson, a 17-year member of Valley Presbyterian, was among scores in the congregation who were part of the process.

“It was a very raw look at the church but it was exactly what was needed,” she said of the report.

The report talked of “shadow power groups” with a “long history of … being very active and vocal in unhealthy ways.”

It said Valley Presbyterian had a track record of hiring pastors who could preach but lacked administration and management skills, which spilled over into “a poor relationship between the support staff and certain groups within the Church.”

The report said “training for Church Officers and Committee Members was insufficient,” leading to “ineffective leadership and lack of cooperation.” It noted a drastic drop in attendance and giving, and said “information seems to have become a source of power.” It noted “a perception that the complete truth is never told.”

The report also delivered good news — the church’s diverse music program, Stephen Ministry and community outreach; its annual patio sale to fund missionary efforts and the “warm and friendly nature of the Congregation.”

But the overriding message was clear: Valley Presbyterian Church was in trouble, and had been for years.

The JAG report asked the congregation a defining question in its quest for answers. Do you want to tell people, “I go to church,” or that, “I am the church”?

The 22-page report, with the congregation’s recommendations as its foundation, opted for the latter.

The church modified its mission statement and identified 11 areas where it needed to improve, including communication, conflict resolution and leadership.

It introduced new terms to the church, such as “triangulation” — a manipulation technique that avoids addressing conflict — and Family Systems Theory to help them understand emotional connectivity and how to understand how others approach issues.

Just as important was what the report didn’t say: That the church’s problems were all tied to DeLong or led to his death. But it was obvious that his suicide forced the congregation to face itself.

“I think it taught us a big lesson, a really painful lesson,” Fredrickson said. “I think we learned that that kind of backbiting and that kind of nastiness that goes on is just not productive and it does a lot of damage.”

But many of the declines can also be attributed in part to factors outside the control of the Green Valley church.

Mainline denominations such as the Presbyterians have been hemorrhaging members for decades, and much of the unhealthy culture is not uncommon at other churches, regardless of faith, Fredrickson and Christopher agreed. The challenge was to admit it existed and address it.

Valley Presbyterian was ready to do both.

“We’re a different people, how could we not be after a crisis?” Christopher said. “This is what we were aiming for.”

She said people who had left the church after DeLong’s death are returning.

“The people who are here are committed,” she said. “They’ve walked through this. What’s happening now is hope and a joy, a hope of a future. They’re so excited to see what God is going to do here.”

Fredrickson, who was very close to DeLong, said the JAG report, which has been posted on the church’s website, has made a difference.

“I’m optimistic now. This church has changed in the time since Larry’s death,” she says. “We are now a cohesive group.”

Committees are using it to guide decisions, she says, and the report helped them realize what they wanted and needed in a permanent pastor.

That’s where Craig Lindsey entered the picture. They call it God’s perfect timing.

Lindsey, 61, didn’t think he’d finish his preaching career in upstate New York, but after 22 years at First Presbyterian Church of Skaneateles, it sure looked like it.

“It took dynamite to get me out of here,” he said of the town on the lake. “Lovely congregation, beautiful setting. We had a lot of memories and it was hard to leave.”

But earlier this year, a Presbyterian website that matches pastors to congregations prompted him to take a close look at Green Valley.

When he decided to further explore the possibility, he came in with eyes wide open.

“It was an open discussion,” he said of DeLong’s death. “There were no secrets. They owned the fact that our last pastor not only died, he took his life, and that’s painful for the congregation to feel some responsibility in. We all bear that responsibility. But, it’s not a matter of blame, it’s a matter of we can’t do that again. We have to make sure we’re moving forward in a healthy way.”

When he was finished, they asked him to leave the room and they took a vote: 198-0, a unanimous call.

“I’ve never seen that before,” Christopher said. “We were so thirsty for a new pastor!”

Lindsey and his wife, Judy, saw a church ready to sprint into the future, having grown stronger out of tragedy. But Valley Presbyterian is a work in progress, and he knew with training in Family Systems Theory that he could help.

“These were all members of the congregation who were looking at, ‘OK, we’ve had this crisis, we’ve had our history, how do we move ahead?’ They worked seriously for over two years along with the administrative commission with the presbytery and were able to deal with their past and come to a new time in the future.”

He calls the report an honest and important assessment.

“I think that church is ready to be loved and ready to take off.”

Fredrickson and the congregation are on board.

“People have so many hopes and dreams in this pastor,” she said. “Everybody’s saying this is a new day for Valley Prez.”

His wife, Judy, is also a minister. He has ministered at churches in New Berlin, Wisconsin, and Battle Creek, Michigan.

He and Judy have two sons who live on opposite coasts, ages 31 and 33.

Lindsey has a bachelor’s in urban planning/community development from College of Wooster, Ohio; a Master of Divinity from Union Theological Seminary in New York; and a Doctor of Ministry from Columbia Theological Seminary, Decatur, Georgia. His thesis: Pre-Requisites for Congregational Resurrection: If Salt Has Lost Its Savor, 5 Case Studies.

He has been an Elected Commissioner to the Presbyterian Church (USA) General Assembly: Permanent Judicial Commission, the Ecclesiastical equivalent of the Supreme Court for the congregation, and was chaplain of the Skaneateles Volunteer Fire Department for 20 years. He is a founding member of the John Dau Foundation, and traveled to South Sudan solo in 2005, to find and re-unite “Lost-families,” and building trust to encourage volunteer contractors and medical personnel to go there. That work has continued.

Lindsey arrived Oct. 1 and begins preaching today; he will officially be installed in November.