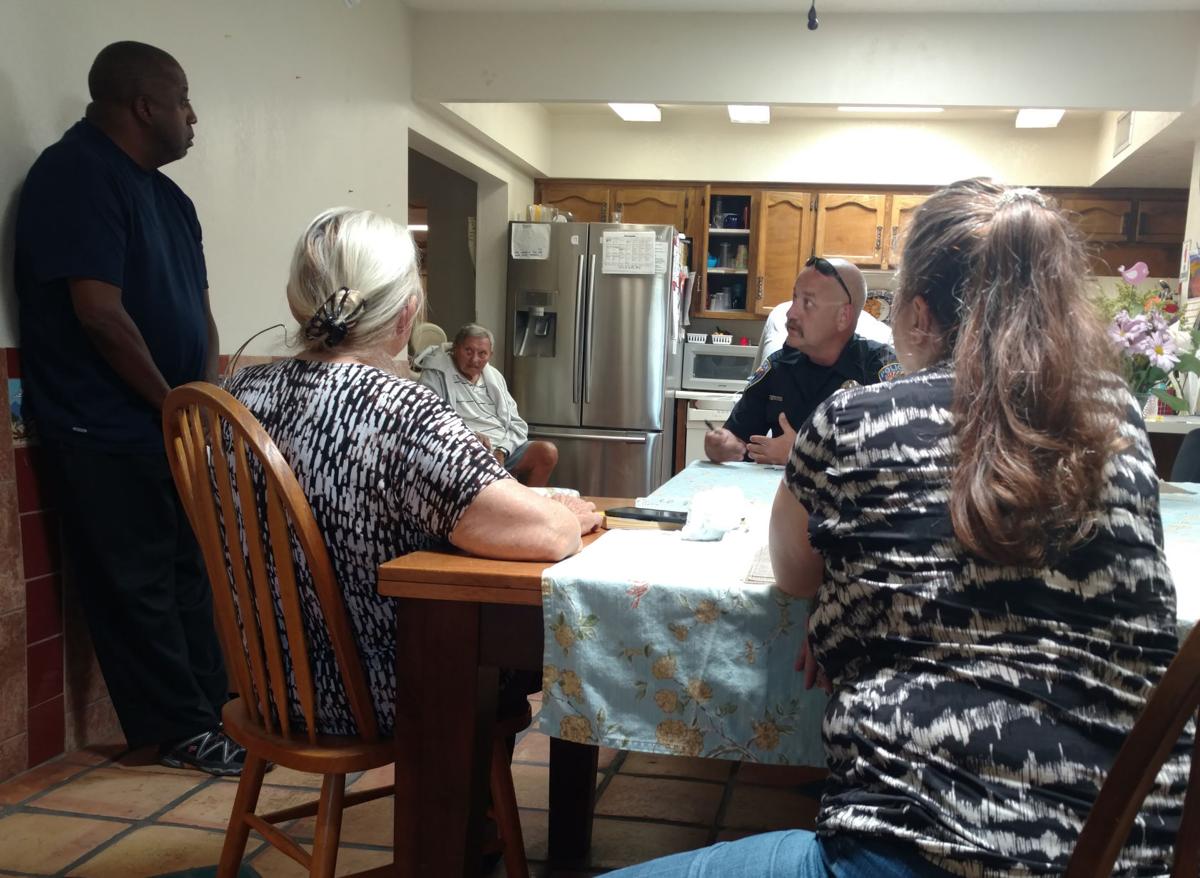 Jerone Davis, left, speaks with a Sahuarita Police officer May 19, 2017, at one of his Sahuarita care homes. 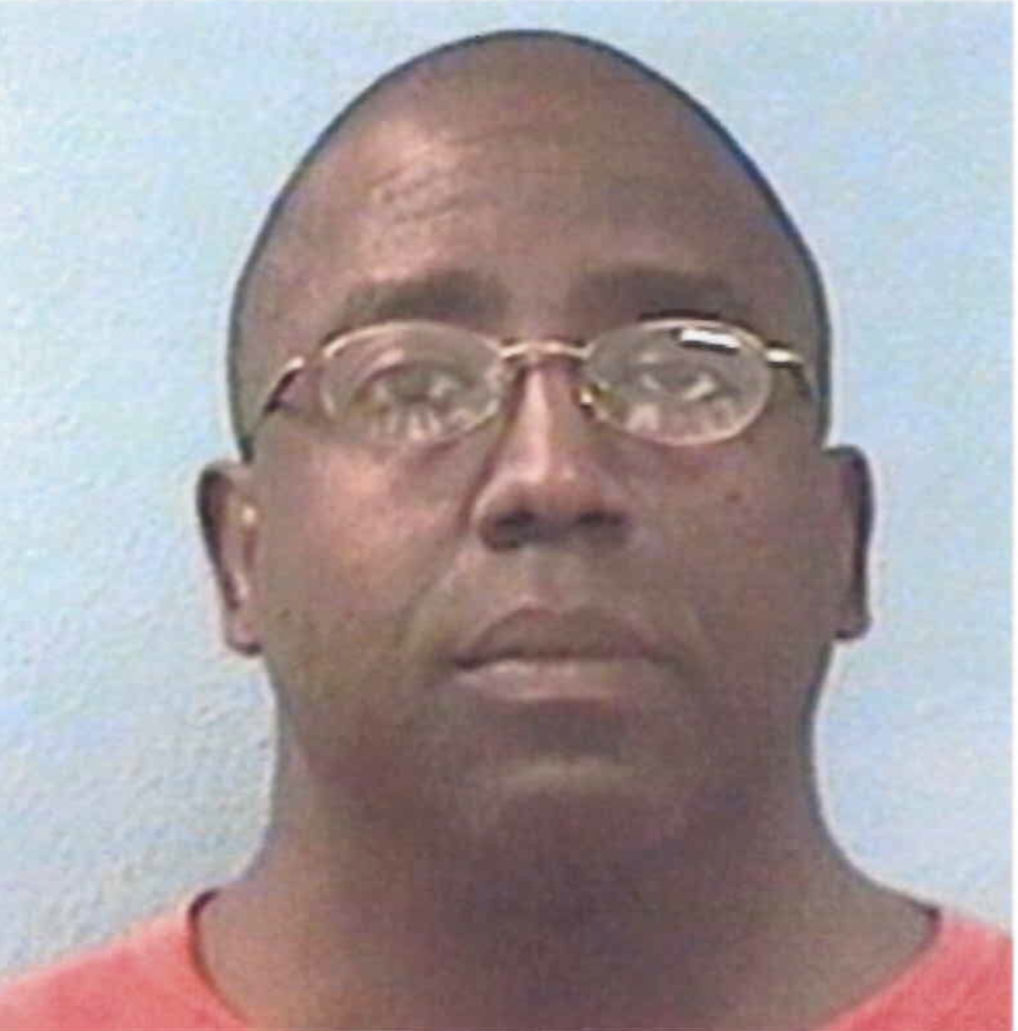 Surprised, but pleased. That was the reaction Robert Everson and Patricia Heppel had last week when the Arizona Attorney General's Office called to tell them Jerone Davis had been indicted.

"Honestly, I didn't think I'd ever hear anything," Heppel said Tuesday morning. "I thought it would be swept under the rug."

In May 2017, Davis was operating five assisted living facilities in Tucson and Sahuarita under the name of Rancho Verde Care Communities. On May 18, 2017, 13 residents were removed from two homes in Los Arroyos and Valle Verde del Norte after caregivers stopped showing up because they weren't being paid.

Davis was indicted by a Pima County Superior Court grand jury on Nov. 5. He is now facing one count of Fraudulent Schemes and Artifices and 14 counts of theft, all of which are Class 2 felonies. According to the fraud charge, Davis "knowingly obtained a benefit with a value of $100,000 or more, by means of false or fraudulent pretenses, representations, promises or material omissions" on April 17, 2017 through May 18, 2017.

Two of the 14 people named as victims in the indictment are Heppel's sister, Deanna Martin, and Everson's late father, David Everson.

Heppel's sister was one of those forced to leave the Rancho Verde Duval home. Deanna loved the family-type atmosphere of the place so much, Heppel said she paid six months in advance in May 2017 and for another year in advance before those six months were up. She estimates Davis owes her more than $11,000.

Everson, of Foley, Alabama, said his father died March 17, 2017, just 10 days after he moved into Rancho Verde Octubre. Everson paid six months in advance because it was less expensive. When Rancho Verde Octubre shut down, Everson said Davis agreed to reimburse him $16,500. He's yet to see the money.

"I couldn't be more pleased (by the indictment)," Everson said Tuesday. "He knew he wasn't going to be able to pay all of his bills and yet he still convinced me and others his was a going concern."

Everson last spoke with investigators two years ago and they told him the investigation would be a long and difficult one.

"It looks like they're doing their job," Everson said. "I'm glad they kept following through on it."

Heppel said she called the special investigator assigned to the case every other month.

"All they would ever say was that they were on it and it was going to take some time," Heppel said.

Her sister is now in an assisted living facility in Green Valley, although she's doing well, she still misses the Rancho Verde Duval home, Heppel said.

Bobbie Fankhauser suspected an indictment might be coming. Last month, she'd been asked to provide the Attorney General's Office the contract she signed with Davis for her friend, Joe Kovacs.

Fankhauser, Kovacs' power of attorney, had paid Davis six months in advance and she had to come up with $2,700 for a new facility when Rancho Verde Duval was unexpectedly shut down in May 2017.

"I know we'll never get Joe's money back, but I'm glad they finally nailed him," Fankhauser said of Davis Tuesday.

In an interview in May 2017, Davis blamed his financial woes on several families abruptly leaving his homes over the past couple of months but insisted that caregivers have all been paid.

Davis said he had made arrangements to purchase seven assisted-living facilities between 2014 and 2017, but had to back out of purchasing two homes because numerous complaints were made to the state Attorney General’s Office, APS and DHS resulting in 17 visits from those agencies.

The complaints varied, but some pertained to a lack of food and employees not getting paid, Davis said. He suspects most of the complaints were filed by his operations manager, although he couldn’t explain why she would file complaints against him.

On Tuesday morning, Davis maintained his innocence in a brief phone interview.

"I did not steal hundreds of thousands of dollars from clients, from residents," Davis said. "The real story is going to be real great when people hear it, when they see all of the proof. It's going to be good."

Davis declined to meet with a reporter Tuesday.

"I don't have time to meet today and go through all of that," Davis said.