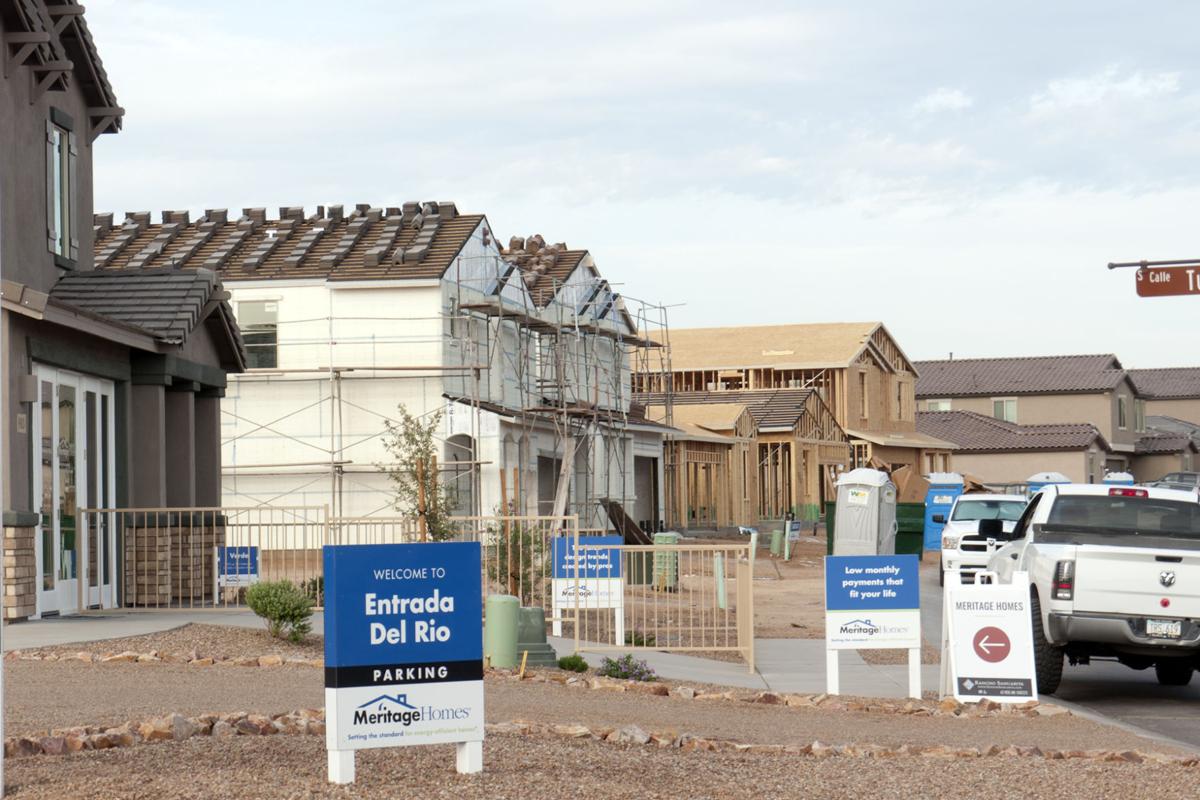 Home construction in Rancho Sahuarita's newest neighborhood, Entrada Del Rio, is expected to increase the  low inventory of homes available in the area. 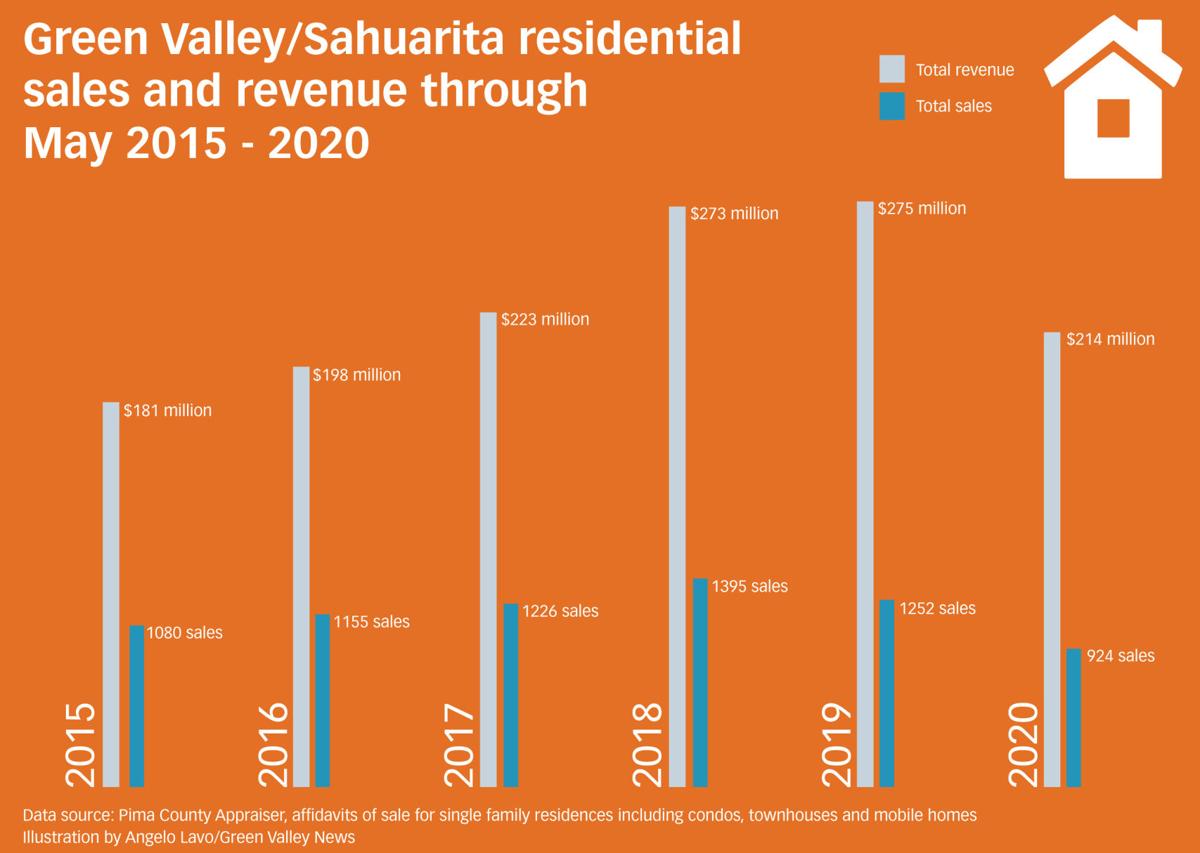 Illustration showing residential sales and revenue through may from 2015 - 2020. The data indicate a decrease in both metrics since 2019, possibly attributable to the COVID-19 pandemic.

Home construction in Rancho Sahuarita's newest neighborhood, Entrada Del Rio, is expected to increase the  low inventory of homes available in the area.

Illustration showing residential sales and revenue through may from 2015 - 2020. The data indicate a decrease in both metrics since 2019, possibly attributable to the COVID-19 pandemic.

Climbing prices. Few homes on the market. A pandemic.

For real estate professionals in the Green Valley/Sahuarita area, the lesson in 2020 has been clear: Learn to adapt.

Since the lifting of the governor’s stay-at-home order, home buyers, sellers and those conducting the transactions have made adjustments in their approach, but homes continue to change hands.

During the economic shutdown, operations came to a screeching halt but it is uncertain how that period of inactivity will factor into real estate companies’ annual bottom line, most think they will bounce back and end up in a profitable position, if not surpass last year’s revenues.

None of the real estate companies contacted for this story were willing to share sales figures.

Sue Jones, owner and broker for Copper View Realty, said her company is “way ahead of the game as far as last year goes” and the market has “more homes going under contract every day than we have on the market.”

Houses are selling as soon as they hit the market, often at list price or above, Jones said.

“It’s a seller’s market, and it is hot,” Jones said. “I’ve seen it before like this, but this is probably the lowest inventory I’ve seen in five years.”

“What happened was we were in a strong, strong market and then COVID hit. Things kind of came to a standstill for many folks because sellers didn’t want people in their house,” Monday said. “Things that were selling at that point tended to be $150,000 or less, so if you were up around $200,000 or more some would still sell, but many would not.”

“You can’t shut down the economy for two to three months and expect it to look just like it looked last year,” Monday said. “But what I’m seeing is that because it was such a strong market when everything hit, it’s starting to show signs of recovery.”

Monday put a $425,000 listing on the market in early June and it went under contract 22 days later.

“We are very much a low-inventory, high-demand market right now,” she said.

Jim Callery, branch manager at Coldwell Banker Realty, said the housing market is driven by inventory and “the inventory as we look at it is basically gone for the most part.”

Callery checked the Multiple Listing Service of Southern Arizona database this week and found there were 212 active listings in the Green Valley/Sahuarita area and said 98 of them are Coldwell Banker’s.

He said 212 listings is a very low amount compared to years past when the area would have a few thousand homes for sale.

He said looking at the Tucson market helps to determine larger regional trends. For instance, in 2007 the Tucson market had on average 10,400 homes for sale and currently there are about 1,500 homes, including townhomes, for sale. The low inventory trend is reflected in the greater region.

Callery said when COVID initially hit there was pullback from buyers and sellers concerned about the disease but he predicts impacts to companies “will all level out by the end of the year.”

“The initial impact was very heavy, and it hit everybody, including us, very hard, because everybody pulled back and hunkered down,” he said. “But then as things eased up a little bit, things came flying back pretty fast.”

“A buyer needs to have urgency in their approach to the marketplace” because of the low amount of inventory, Callery said.

“There isn’t time to think about it overnight, there isn’t time to dawdle, you know, ‘Well we’ll come out in a few weeks and see what else is for sale.’ Inventory is literally drying up very quickly,” he said.

“I went back six months of sales in Green Valley and Sahuarita last year [January to June] and there [were] about 100 homes [sales] in Green Valley less this year than last year, but there is a lot less inventory.

“In Sahuarita there [were] about 50 or 55 homes less this year, but like I said the inventory has been a lot lower this year. So, I’m thinking it’s pretty much the same,” he said.

“I’ve sold more properties this year than the six-month period last year, so I’m certainly on track. And everyone I talk to is busy.”

“For some reason, we still have people that have to sell and people that need to buy, and COVID hasn’t really affected us other than in the way we do business,” Samovitz said. “We’re doing a lot more virtual business. Of course we’re wearing masks, using wipes and gloves, all this other stuff, but it hasn’t really hurt the business.”

For Victor Rodarte, a real estate agent for Long Realty who deals primarily in Sahuarita, COVID presented an obstacle the industry quickly managed.

“I see that our industry has really just adapted to this new environment and is just being proactive to the type of things that are going to protect our clients, and other agencies we work with like title companies, mortgage companies and home inspectors,“ Rodarte said.

“There are some agents that have just gone full speed ahead without really cutting back because of the virus and hopefully they’re all being careful and wearing face masks and trying to do the social distancing as much as possible,” he said.

Virtual home tours and online meetings increased due to the pandemic for Rodarte but any dip in activity has been “minor.”

“We see the market as very strong in Sahuarita right now,” he said. “Homes are selling at a very brisk pace often with multiple offers."

“The market is reflecting a couple of variables, one being the basic law of supply and demand where we still see strong demand but the supply is quite limited.”

“Right now I’d say that it’s less than a month of inventory of existing homes. So as a result of that we’re seeing the other phase of the market picking up from that, that being the new home construction.

“Those homes are filling in a lot of the gap because of the lack of existing homes on the market and those homes are selling very quickly as well.”

The Town of Sahuarita issued 294 building permits for single-family homes since the beginning of 2020. But for fiscal year 2020, which began July 1, 2019, 464 permits have been issued, according to the planning and building department. In fiscal year 2019, 324 permits were issued, indicating a year-over-year increase.

Rancho Sahuarita’s newest neighborhood, Entrada Del Rio, accounts for many of those permits and has provided builders additional opportunities to cash in on the planned community’s expansion. Construction is underway for builders such as Richmond American, Meritage, Lennar and KB Home, with some homes already sold.

“We recently made a strategic land acquisition in the Rancho Sahuarita master plan, purchasing 55 new home sites,” said Amy McReynolds, president of KB Home’s Tucson division, in an email. “The area has always been a successful sub-market for KB Home.”

KB is preparing the land and developing its model homes which are expected to be ready by winter. The company takes a different approach to building, according to Craig LeMessurier, senior director of public relations, and offers home personalization to buyers.

The company develops model homes buyers can then personalize through a host of exterior and interior options including structural conversion of areas within the model.

“Home office is a big thing right now that people are looking for,” LeMessurier said. “I think we are definitely responding to a trend...today it’s even more prevalent.”

LeMessurier said the pandemic shutdown caused some delays in development and the virus has altered how their homes are sold but thinks overall the company has adapted to the changes.

“I think there’s a light at the end of the tunnel and for homebuilding we’ve been pretty strong moving out of it,” he said.

Data available from the Pima County Assessor’s office indicates from January through May of this year sales of single-family residences, condos/townhouses and mobile homes in Green Valley, Sahuarita and the surrounding area totaled about $214 million from 924 transactions.

From January through May of 2019, identical types of sales totaled about $275 million from 1,252 transactions.

A look at the market since 2015 indicates either the number of sales or revenues increased year over year since then but then both fell off this year January through May.