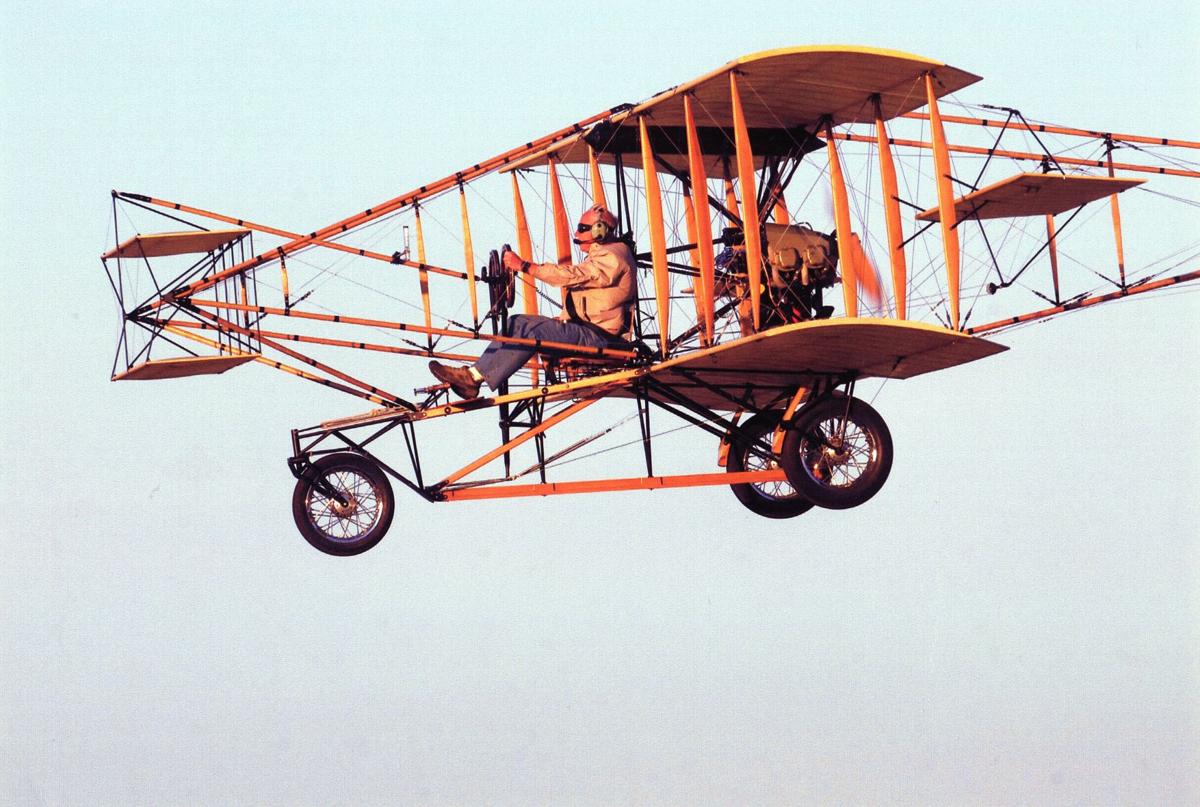 Jim Otey glides through the air at 50 mph in a 1909 Curtiss Pusher replica biplane at Lewiston-Nez Perce County Regional Airport in 2010 to celebrate the centennial of the first flight in Idaho history. 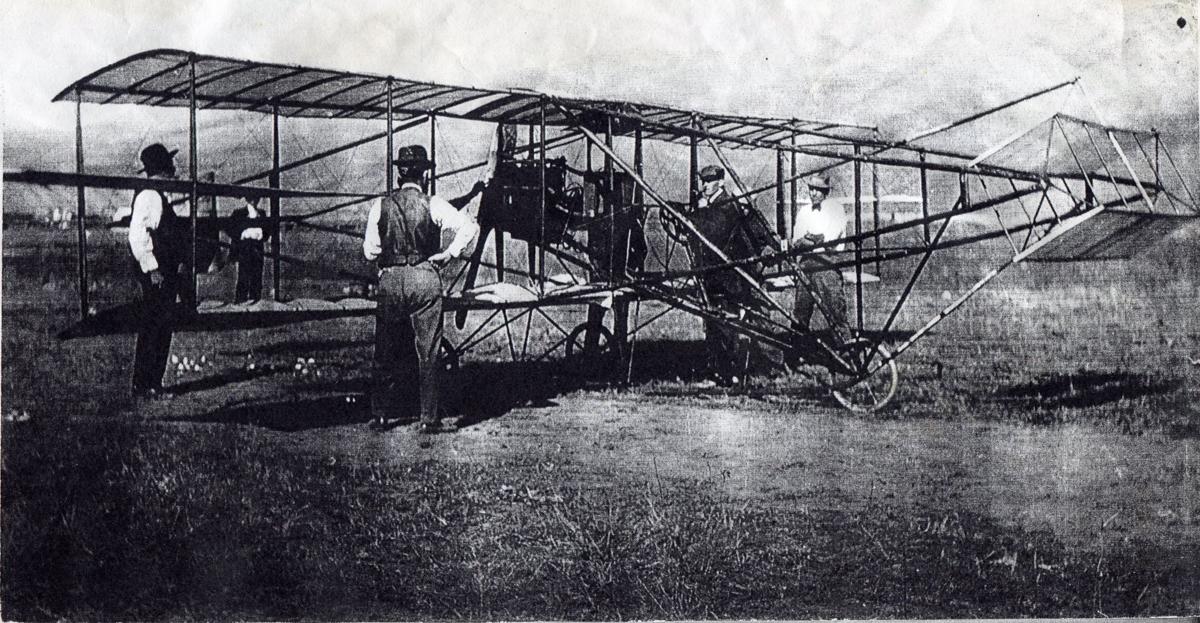 A picture from the original 1910 flight shows a handful of men prepping the plane for takeoff in Lewiston, Idaho. 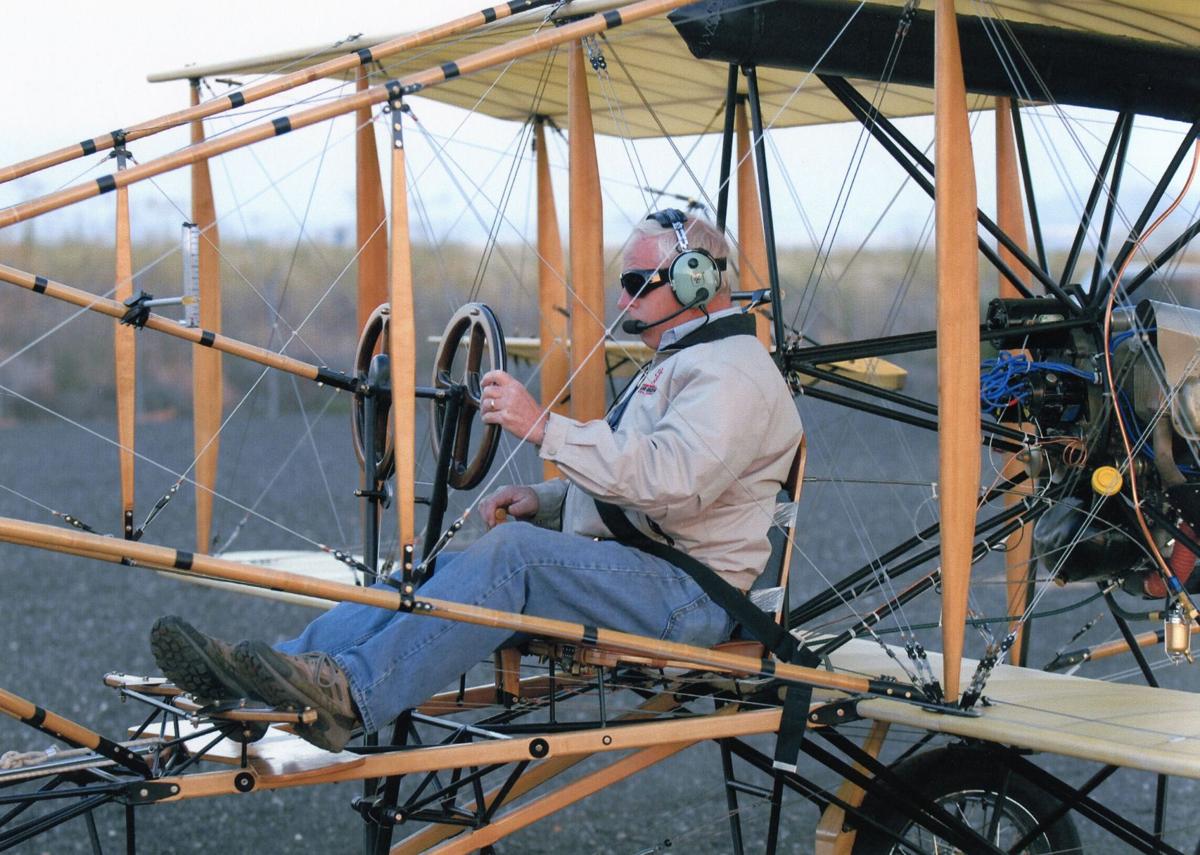 Jim Otey gears up for a ride in the replica biplane in 2010.

Jim Otey glides through the air at 50 mph in a 1909 Curtiss Pusher replica biplane at Lewiston-Nez Perce County Regional Airport in 2010 to celebrate the centennial of the first flight in Idaho history.

A picture from the original 1910 flight shows a handful of men prepping the plane for takeoff in Lewiston, Idaho.

Jim Otey gears up for a ride in the replica biplane in 2010.

If you venture north to the Pima Air and Space Museum you'll find hangars full of aviation history.

You'll also find people who have played a role in that history, like 76-year-old Green Valley resident Jim Otey.

He first took to the skies as a teenager in Washington state and bought his first plane at 18. He was drafted into the Army not long after, and served from 1962-65, conducting surveillance flights over West Germany aboard a Grumman OV-1 Mohawk.

The Auburn, Wash., native returned home, taking a job with Boeing in Seattle, where he worked for more than three decades. He spent the majority of his career as a test pilot, including for the Boeing 777, which he flew all over the world before taking early retirement in 1999, at 58.

Two years ago, he and his wife, Inge, moved to Green Valley, and he has been a docent at Pima Air since.

He continued tinkering with airplane development after moving to Lewiston, Idaho in 2000, joining the Experimental Aircraft Association Chapter 328, a group of aviation enthusiasts who met at the town's airport.

Otey met fellow plane buff Dean Wilson through the organization, and the two soon got to work on their magnum opus — a full-size, functional replica of the iconic 1909 Herring-Curtiss Pusher Model D biplane that made history on Oct. 13, 1910, when it was the first airplane to fly in Idaho and Washington.

The idea behind recreating the historic plane was hatched after a friend who was helping his sister move across the state line in Clarkston, Wash., stumbled upon a partial set of plans for the aircraft.

He contacted Otey and asked if he wanted it as a decoration. But Otey and Wilson had a more ambitious idea.

"I spoke to (Dean), and asked him if he thought this was a doable project," Otey recalls. "Dean thought it was too big of a project at first, but I thought we might as well take a look."

They contacted the Glenn H. Curtiss Museum in New York, which sold him a full copy of the plans for $25, and the two got to work.

With help from fellow members of their EAA chapter, they spent the better part of two-and-a-half years, $20,000 and close to 2,000 hours building the plane with a goal of flying it from Lewiston's airport on Aug. 13, 2010, 100 years after its original flight.

It was an ordeal, requiring 128 one-eighth-inch cable wires and thousands of parts to hold the plane's bamboo frame and sailplane cloth covers intact.

Otey and Wilson barnstormed their way around the area to raise money and managed to cover the cost of the project.

"Without Dean's skill and my fundraising ability this would have never happened," Otey says.

But the first obstacle they encountered happened long before their replica took to the blue skies of Idaho.

"It turned out that where the original flight had taken place, there was a Walmart store there now," Otey says. "So we actually tried to get Walmart to close down the parking lot early in the morning and we'd take off from there and make the exact same flight. They would hear nothing of it."

They also got by with a little luck, like getting a Cessna 150 engine for $10,000 from a friend after his experimental plane failed to fly properly.

The two had more good fortune when a retired CEO of a local bullet manufacturer improvised a way to make the turnbuckles they'd need to keep all those wires in place out of motorcycle spokes — far cheaper than the store-bought version, which were $28 apiece.

The next obstacle was getting the plane approved for flight by the Federal Aviation Administration, which wanted them to test out all of the plane's wires and turnbuckles before takeoff.

"We had to test them to two times the expected tension that the airplane would experience in flight," Otey says. "We passed the test."

Otey and Wilson flew several test flights totaling 12 hours before the big day, making sure the plane could make it.

Otey said the event itself was something he'll never forget.

"It was a citywide celebration," he says. "I was flying at about 50 feet in the air, and part of that got on national TV. It was pretty neat."

He said whizzing through the air at 50 mph in the open-air biplane in front of thousands of spectators was thrilling.

"It's kind of a motorcycle with no windshield," Otey says. "The engine is behind you, and it doesn't have a muffler, so it's real loud some two feet behind you."

Otey flew without incident during the exhibition, and showed off its impressive stability by conducting a low-level flyby without his hands on the controls.

Otey still beams when he talks about the accomplishment that the two men were able to achieve on the banks of the Snake River six years ago.

"The pride that comes with being able to do this and expose aviation to the public that they don't know about," Otey says. "Aviation history is made every day. But there's a time zone that goes along with it, and it doesn't take long before it's all behind you."

Otey is honored to have played a role in that long history, and to be given the chance to showcase all the hard work he and Wilson put in.

"That day in Lewiston had pride associated with it, because I helped build the dang thing," he says. "I touched every piece on that plane, and you get to the point where you know every piece by touch."

The two made sure to reimburse every dollar they received from donors after they sold the airplane in 2011 for $60,000 to aviation collector Kermit Weeks, who runs the Fantasy of Flight Museum in Polk City, Fla.

"Kermit loves airplanes, and luckily he loved our airplane," Otey recalls. "So he brought his checkbook with him to Lewiston."

Otey was impressed by Weeks' humility and willingness to work with them on a price for their airplane.

"I love the man," Otey says. "He hung around with me for two days, took a thousand photos of this airplane, and asked me questions about it. And after his inspection he bought us dinner and wrote out a check."

The two kept the plane in storage for just over six months to avoid paying additional Florida sales taxes, before shipping it off in a tractor to the museum.

Weeks flew the plane around the Florida museum several times after purchasing it, and says taking it in the air is a unique experience.

"It's a great plane," Weeks says. "One general rule with any aircraft of that age, though, is don't fly any higher than you're willing to fall."

He's taken employees and friends on rides since purchasing the plane, and says he usually cruises at around 40 mph.

Life in the pilot's seat

Otey is still active in the flying community in Southern Arizona, serving as a flight instructor at Ryan Field and Tucson International Airport, and at visiting community airstrips in the area.

He also volunteers with Wright Flight, a Tucson-based non-profit dedicated to introducing children to aviation by getting them in the pilot's seat of an airplane.

"We're trying to bring the idea to kids that flying is something that they can look forward to," he says. "There are thousands and thousands of people employed in aviation, and we bring that to their minds."

Aviation's always been a part of Otey's life, living on a residential airstrip for more than 20 years while working at Boeing.

"Our tradition on Fridays nights was to jump in our four-seat airplane and fly someplace for dinner," he says. "Because we lived at an airport, I'd say, 'Let's fly to another airport that has a restaurant.' So my kids got introduced to flying early in their lives."

He'd commute by air several days a week to the company's Everett headquarters about 60 miles north.

"I lived on one airport and worked at another," he says. "It was 21 minutes by air, versus an hour-and-a-half of driving through the traffic in Seattle."

He decided to volunteer at the museum shortly after moving to Green Valley, when he found himself having more than enough free time on his hands.

"My wife got sick and tired of me sitting around and watching TV," he says. "I love working there. It's perfect for me because of my history of flying and love of older and experimental aircraft. I have a lot of background and experience with aviation, so it was an easy fit for me to volunteer there."

Otey says he wouldn't have gotten where he has in life if not for aviation.

"Flying has been a big, big, big part of my life," he says. "I started as a young child building model airplanes out of balsa wood sticks and moved on from there."