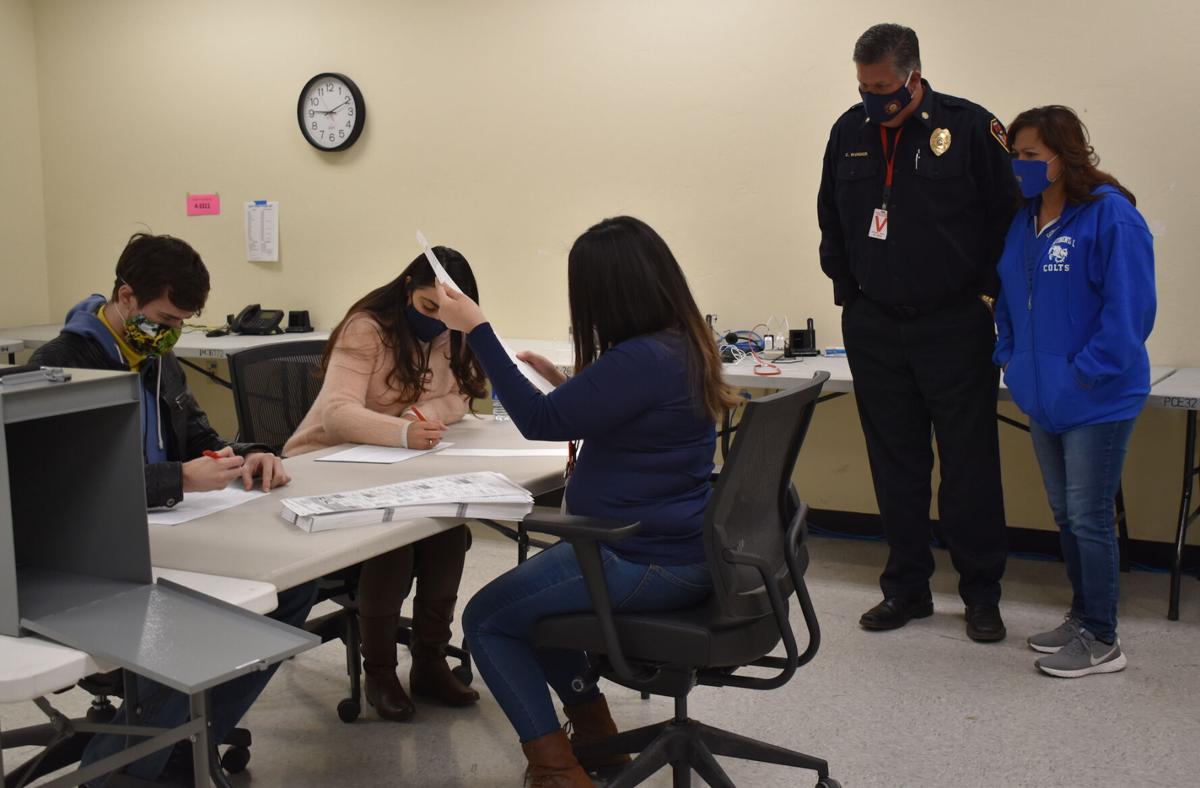 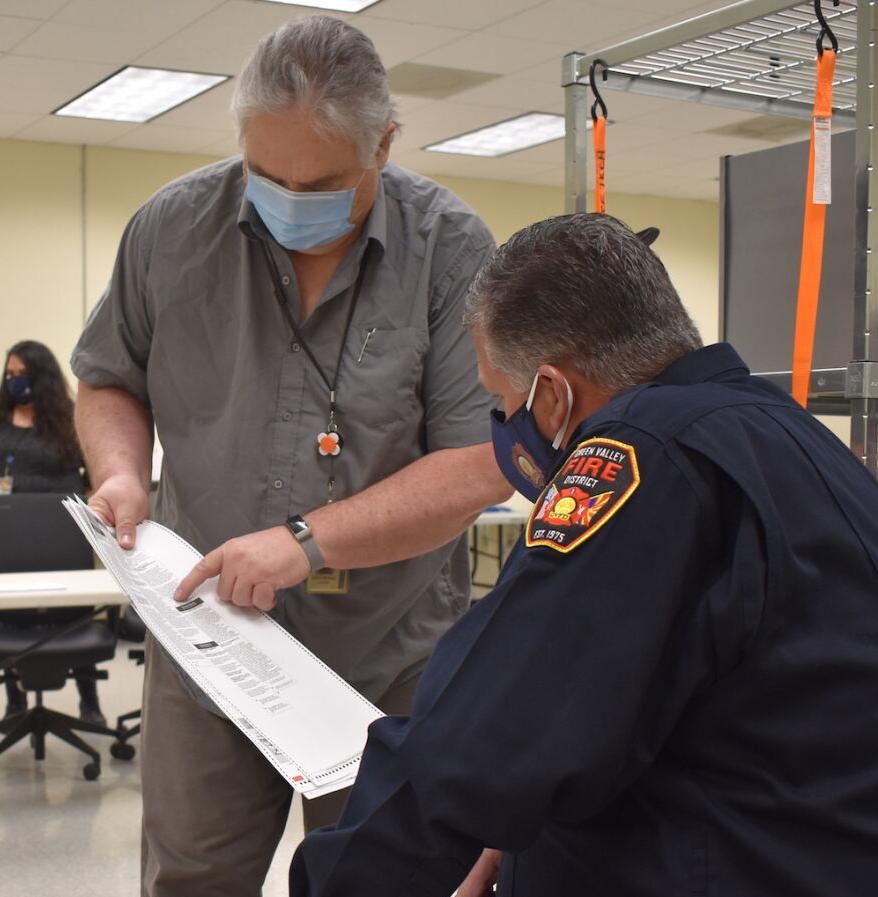 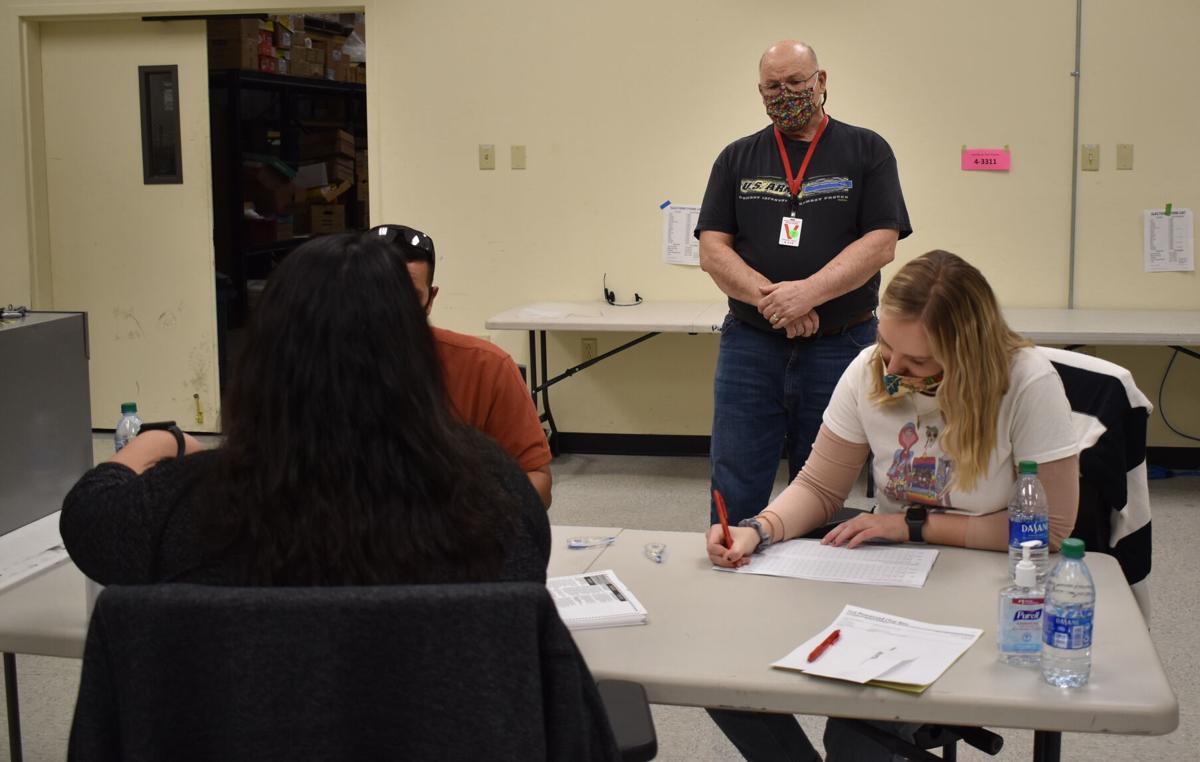 Democratic observer Mike Coltrin watches on as one worker calls out votes for the propositions and two workers tally the count. 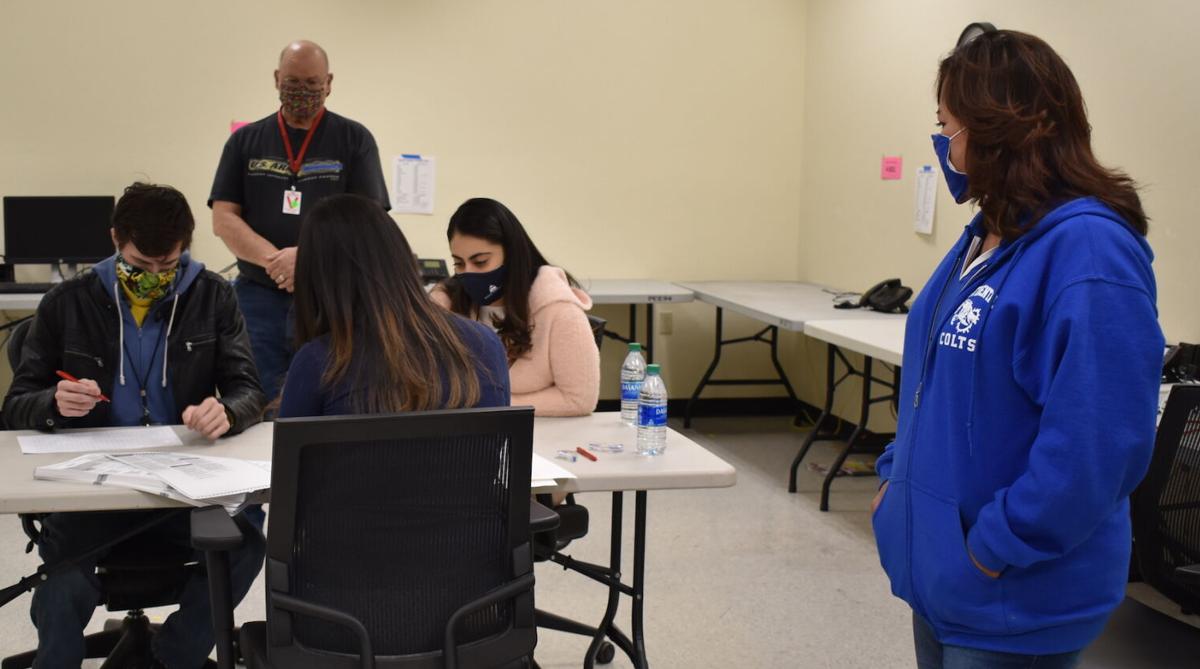 For those working at the Pima County Elections Department, the job extends far past election night.

Even on Veterans Day, the room of people counting remaining ballots was full.

Another group of about 10 election workers was beginning the process on something entirely new that morning, a hand count of two Green Valley propositions that were victims of either a software or printing error, rendering the results unavailable on Election Night. They finished the job Saturday.

Though it will still take some time to determine the exact cause and timeframe of the error impacting Continental Elementary School District’s budget override and Green Valley Fire District’s bond, the solution was underway Wednesday, and there were plenty of safeguards in place to be sure it was done correctly.

Elections Director Brad Nelson explained that CESD’s Prop. 484 and GVFD’s Prop. 485 did not receive an accurate count of votes due to a likely software error caused by an alternation they had to make to the ballot.

They believe when the Arizona Secretary of State requested that the county edit a line on the ballot, it shifted the ovals where a voter signifies yes or no to a place their machines couldn’t read. Saturday, he said it also could be a printing error, they're still investigating it.

It’s the first time Nelson, who has been with the county’s elections department close to 20 years, has seen this type of anomaly.

“This is very unexpected,” he said. “From the very beginning we knew we had a problem and I had great confidence in my staff. If we couldn't solve this electronically, I knew we could solve it by hand-counting to get an accurate reflection of the voters’ will, and that's what we're doing.”

Nelson said they began to examine the possible cause of the problem and reached out to the stakeholders to keep them informed.

“We had that initial transparency of letting the stakeholders know and reaching out to local media to let them know what’s going on,” he said. “I've spoken with the county government and the county attorney’s office about a solution and the solution was as open and transparent as possible.”

“I think it's good that this process is ready to go sooner than later," she said. "It sounded more secure and legitimate than I thought and I'm happy to hear about all the security in the process.”

On Wednesday morning, Rico and Wunder joined a group of about 10 workers at tables of three to tabulate votes.

The process they used is called a “call method” and involves one person looking at a ballot and calling out whether the propositions received a “yes,” “no,” “under count” or “over count.” The other two workers then tally the vote.

Nelson said to ensure accuracy, tally counters call out “tally” in increments of five to ensure their counts match. They also keep track of which ballots either had no option selected or both options selected to make sure the right number of ballots are counted.

“It’s a slow process and I’m not certain when we’ll be done,” he said. “But, we’ll have plenty of time to go through any audits before we present unofficial results.”

The groups started with physical ballots collected at in-person voting sites for the 12 precincts involving Continental and GVFD. Those were counted up within a couple hours.

Once those were completed, counters examined images of early ballots printed out by the county software using the same call method.

Nelson said transparency is the priority of the department, whether dealing with an anomaly like this one or just the typical process.

Along with having multiple talliers, the Elections Department has observers from different political parties to watch over the process.

Democratic observer Mike Coltrin was present on the Wednesday hand count and said he was watching to see how diligent workers were as they tallied votes.

“I was very satisfied with the whole thing," he said. "They were working through the morning until the afternoon and they're still working. I was watching, though I was not expecting anyone to do anything wrong, and doing my part by observing, seeing things were being done the way they're supposed to.”

His participation in elections started around 2017, after seeing a newscast featuring Michael Moore issue a challenge: Those of you looking to do something, do something.

"I thought, well, I've been laying around, not doing anything politically wise and I found out I could get appointed as a precinct committeeman," he said.

After that, Coltrin worked as an observer during the midterms, an off-year city election and is observing again this election. He was even appointed to the County Election Integrity Commission where he will likely serve through the end of the year.

Regardless of party line, Coltrin said what he has experienced while working with other observers is a dedication to integrity.

"To be fair and honest, in all of my sessions observing vote counts there have been Democratic observers and Republican observers and I have never had any kind of problem getting along with anyone," he said. "We are all there for our civic duty, especially in tabulation work, we're working together. I've always come away feeling good about it."

While issues during an election, such as the two proposition errors, are possible, he’s found it very rare.

"There can be a problem here or there, that's what the hand count is about, but the system can't really be gamed too much," he said. "Personally, I feel very honored to be able to part of the process."

Observers were also at the polling sites on Election Day, there to report any kind of suspicious activity and ensure the process moved smoothly.

Rancho Sahuarita resident Dale Cuneo was an observer with the Republican Party at her local polling site Nov.3.

The New York transplant said it was her first time helping in the election process.

"I received a phone call from the Trump campaign asking if I wanted to be a poll observer and I said sure, why not," she said. "It was a volunteer position and I'm pretty diligent. So I went down to the RNC  in Tucson to give them my credentials."

Cuneo said there were no real issues during election day and she was there to ensure everyone had their opportunity to vote.

"In my opinion, it's more of a presence," she said. "We're not there to interact with voters or poll workers, we're really there to observe and if you see anything that's not right you’re to go to the poll supervisor and bring it to their attention."

She was impressed with the level of civility at the polling site and the fact that political parties were not on display.

"I'm a Republican conservative but I'm fair and I believe everyone is entitled to their opinion," she said. "Honestly, if I saw someone on the red side I would have said something. I believe it's our right to vote and so to have someone feel oppressed or scared isn't right."

Rico said she was appreciative to the election staff.

"Their professionalism, patience and diligence in hand counting ballots and ensuring accuracy in tallies is very reassuring," she said.

Wunder said he was happy with the process and they way the Elections Department handled the situation.

"I was surprised with the transparency and they were very good to us," he said. "They were all over it and it made me feel better about the process. They accepted responsibility and came up with a very workable solution."

The results of the hand count as well as the results of the rest of the county election will next be brought to the Pima County Board of Supervisors. During their next meeting Tuesday, they will vote to declare the county’s unofficial results to official ones.