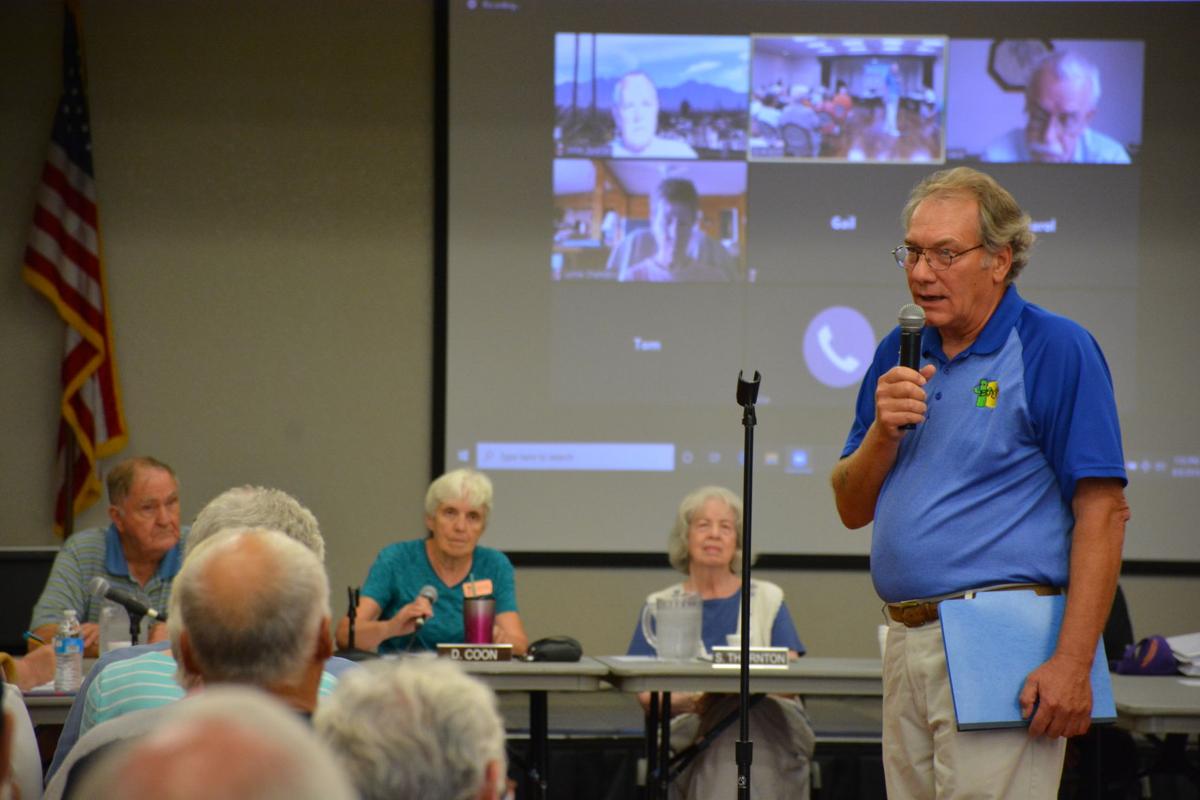 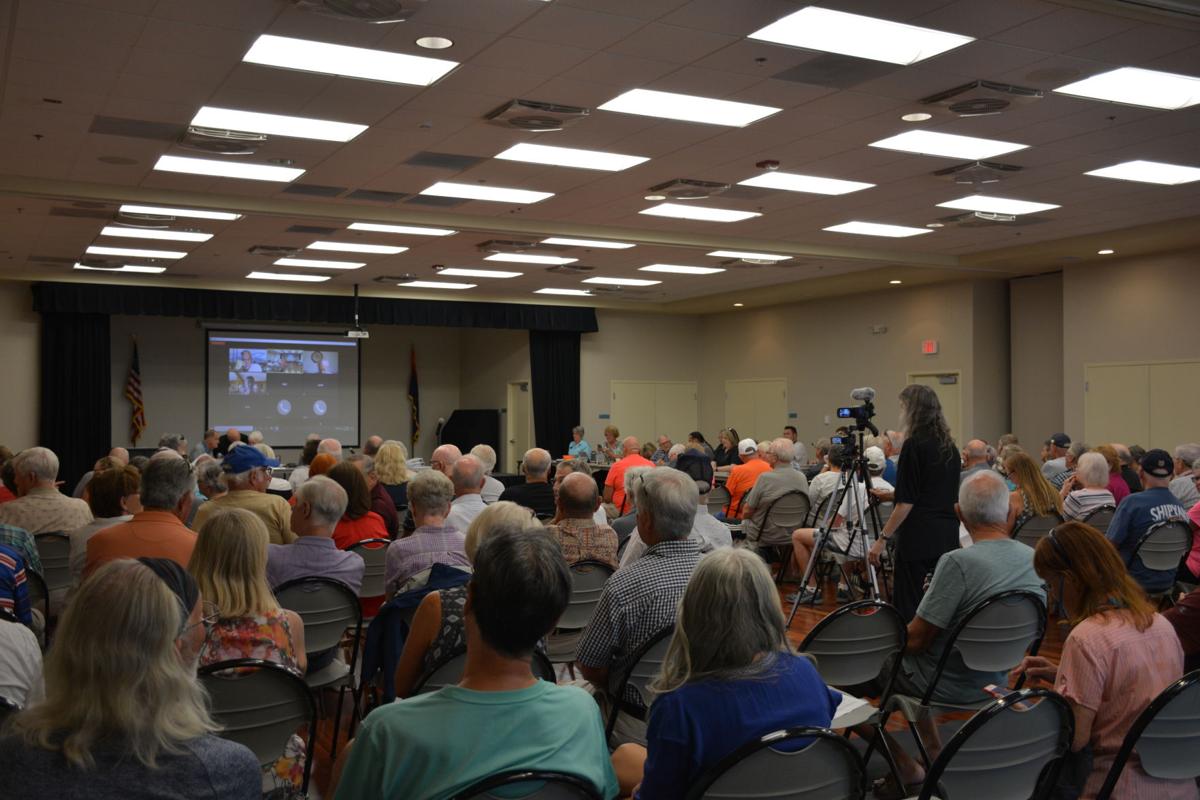 More than 100 people attended a special Green Valley Recreation Board of Directors meeting at Las Campanas Thursday to hear a lease proposal from BAJA Sporting Club.

More than 100 people attended a special Green Valley Recreation Board of Directors meeting at Las Campanas Thursday to hear a lease proposal from BAJA Sporting Club.

GVR's Board of Directors rejected a proposal in a 7-5 secret vote Thursday to open all of its pickleball courts to BAJA Sporting Club in a contentious meeting that nearly saw the audience tossed out.

The agreement would have given BAJA members access for eight years in exchange for $85,000 to build four more courts at the new Pickleball Center under construction. The deal would have included access for dozens of BAJA members who don't belong to Green Valley Recreation.

More than 100 people attended the special meeting at Las Campanas Center, with the majority appearing to back the plan, which had the support of the GVR Pickleball Club. The meeting was tense with outbursts from supporters and opponents. Decorum continued to break down even after some stormed out in frustration with arms waving in dismissive gestures as they left the hall.

At one point, member comments were closed with people still waiting to speak after director Lynne Chalmers called the question which ended discussions and put the proposal to a vote.

Another rowdy round of boos and shouts broke out when board president Charlie Sieck called for the secret vote to determine whether to move forward with the BAJA agreement. Sieck met with a similar response in June when he called for a secret vote to approve the Pickleball Center contract.

The GVR Board of Directors approved a nearly $1.2 million contract to build eight pickleball…

"If you read Robert's Rules of Order, one of the things they encourage is that the members of the board should be free to vote however they choose without any kind of vocal harassment or anything like that," Sieck said. "I think you can agree that there was some intimidation in the room."

The proposed agreement would have granted BAJA access to all GVR pickleball courts but none of the organization's other amenities. The eight-year deal would have allowed 45 non-GVR members to use the courts the first year with five added every year until reaching a cap of 75.

BAJA, best known for its winter softball leagues, has approximately 300 members, including spouses, and about 66 percent of them are GVR members as well, according to Baja president Jim Brewer. The non-profit group runs several sports leagues and performs community service. Its efforts are in large part responsible for the creation of Canoa Preserve Park, next to the Pickleball Center.

Opponents said the deal would violate GVR bylaws on non-member use of facilities. Proponents said non-members already are allowed to use facilities and attend events in some cases. There were no formal legal reviews offered at the meeting.

In an email sent Tuesday from GVR4US, a self-described watchdog group, former GVR director John Haggerty made the argument that any lease agreement with BAJA would violate GVR bylaws and Arizona law.

"There is no provision for GVR to enter into such an agreement, and the use of GVR facilities is only for those groups specifically listed in the bylaws," Haggerty wrote. "The effect of this agreement will be to create a different class of GVR member (limited). Arizona law allows for different classes of members only if the Articles of Incorporation or Bylaws so provide."

Haggerty stated no such provision exists. He also argued many of the BAJA Club members do not belong to GVR. That being the case, he said non-GVR members would pay $65 annual dues to BAJA but nothing to GVR, whose members pay $493 annually after paying a buy-in fee currently at $2,616.

"If these non-members had to join GVR, it would generate four times or more the $85,000 that BAJA is willing to pay," he said.

Sieck was concerned the proposal would eventually allow up to 75 non-members to have access to all GVR pickleball courts.

"That for sure will not increase the value of GVR properties," he said at the meeting. "Actually, it will provide a mechanism for non-GVR members to play pickleball on GVR property and, basically, they can avoid joining GVR and paying the dues. So, there's a real downside to this proposal from a financial standpoint to GVR."

GVR director Sandra Thornton raised concerns about whether approving the agreement would set a precedent for other groups with non-GVR members to access amenities.

However, director Donna Coon said BAJA is open to ages 50 and older and that allowing its members access to pickleball courts in exchange for four more courts could entice them to join GVR when they retire.

Director Don Weaver said being able to potentially complete the 24-court center now could not only benefit GVR, but may also stimulate economic growth in Green Valley as a whole by providing a place for competitions.

Fundraising efforts by GVR Pickleball Club and the GVR Foundation have raised nearly enough to add 12 courts to the eight provided by GVR.

Director Michael Zelenak supported the proposal. He said the agreement is a lease and does not set up a special membership that other directors were concerned about and that GVR already allows for non-member participation in events when tickets are purchased.

"This is a lease agreement, not a membership agreement," Zelenak said. "We don't limit non-GVR members from our other functions and I'm afraid we're moving in a direction that appears as though we're kind of grumpy, 'get off my lawn' people here. And that to me is more of a concern than any of these other things."

BAJA and GVR member Jim Brewer said before the meeting that BAJA had explored working with Pima County to get pickleball courts built at Canoa Preserve Park, but the county's priority for courts is at Kino Sports Complex.

Before the meeting Brewer was unsure how the board would vote, but thought if directors were open to negotiation then there might have been a chance, he said.

"Earlier, I said if it comes to a simple yes or no then we don't stand a snowball's chance on a hot Green Valley sidewalk, and that's what it came to," Brewer said outside Las Campanas after the meeting. "However, BAJA will continue to be the same organization that it is and we'll figure out a way to get pickleball in our club somehow."