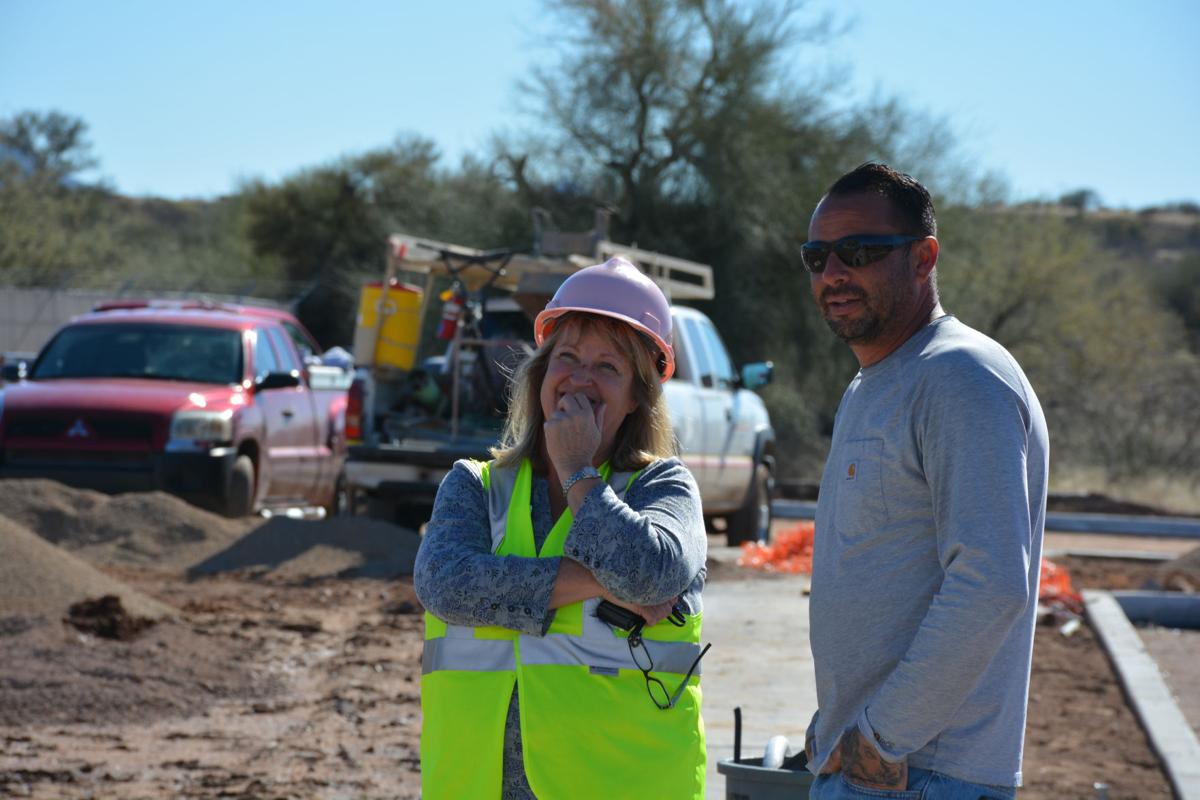 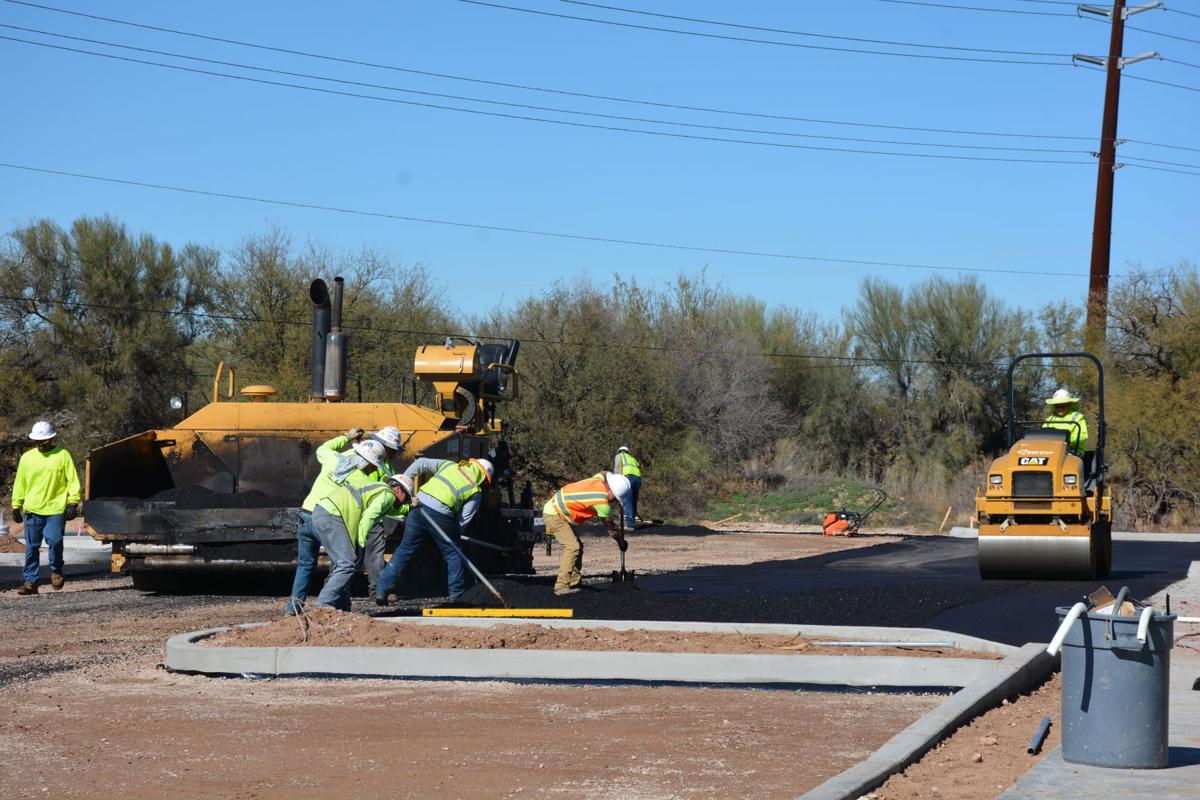 Crews lay down asphalt at GVR's new 24-court Pickleball Center on Thursday in preparation of the grand opening on Tuesday. 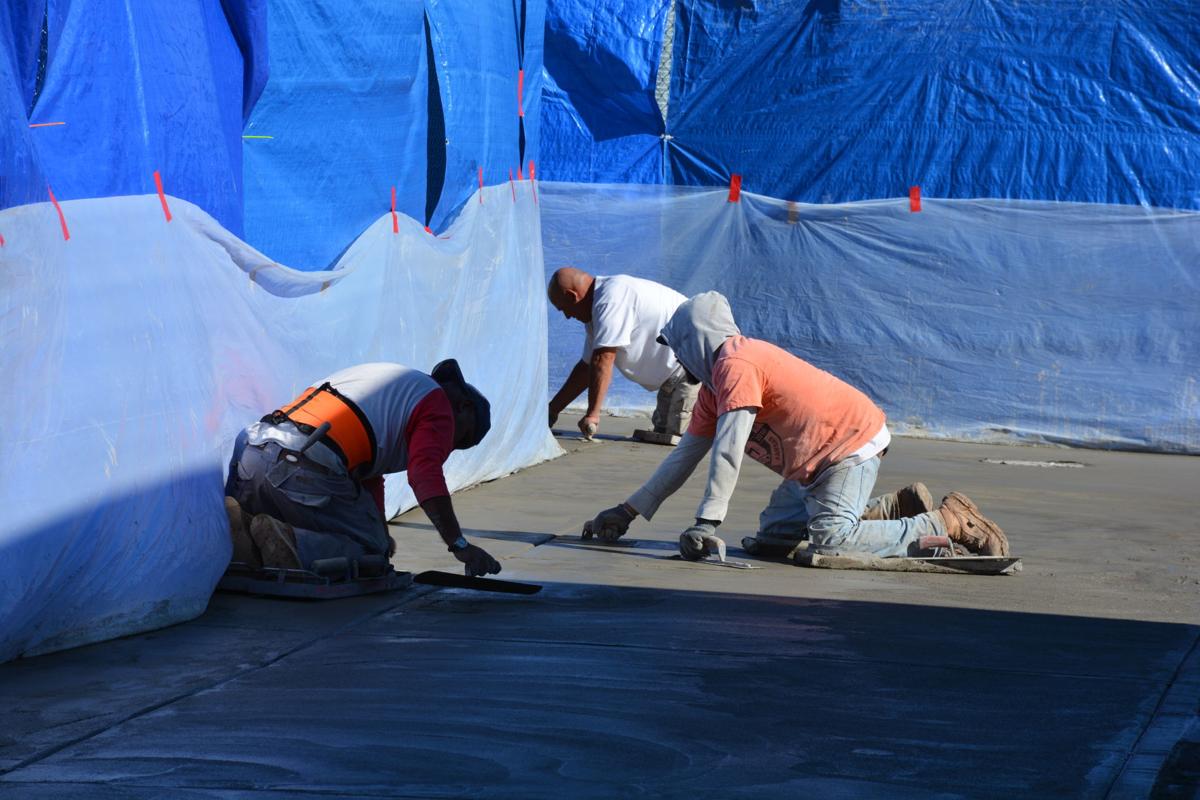 Last Tuesday's rain nearly delayed the grand opening of GVR's 24-court Pickleball Center, but crews should have the sidewalks leading to the courts ready before Tuesday.

It's been an up and down process with infighting, fundraisers and last-minute construction, but the grand opening of GVR's 24-court Pickleball Center is Tuesday.

Last week's rain and other storms this winter nearly pushed back the opening date.

Division II's on-site superintendent, Chris Greene said Thursday this had been one of the wetter winters he has seen but he's confident they'll have everything ready for Tuesday as more work takes place over the weekend.

"The rain delays everything," Greene said. "It's not just one day of rain. You have to wait like three or four days for it to dry out."

GVR's CEO Kent Blumenthal was at the center Thursday as crews paved the parking lot and smoothed concrete sidewalks between the courts and around the site's building. Blumenthal said he was worried each time it rained but is excited the project is in the final stages.

The long road to completing the 24-court Pickleball Center was often filled with tension as the project took center stage in debates between those who thought it was overdue and those who felt it served too few members.

Since the center's inception more than five years ago, the project and anything related to it has been a hot topic. Over the course of several months, raucous exchanges often broke out between members in the audience and directors whenever the Pickleball Center was on the agenda.

In December 2018, WSM Architects unveiled a final design plan for the center with a $2.2 million price tag, a 59 percent increase from the original 2014 estimate.

At the time, more than 100 GVR members lined the East Center auditorium, most applauding the plan, but a few questioned how the corporation would fund the new facility.

After that meeting, GVR Pickleball Club member Suzanne Nordhagen said many in the pickleball community were still skeptical about when and if the center would materialize given the length of time it had been discussed.

“Until they dig the ground and start, a lot of our members think, ‘We’ll believe it when we see it,’” she said.

Nordhagen’s husband, Lee, said “a lot of people are losing interest because this has been going on for years.”

For a brief moment the following month, it looked like there was a possibility Pima County could help out with the construction of the center.

Supervisor Steve Christy had asked staff to look into building a handful of public pickleball courts at Canoa Preserve Park, just 0.8 miles away from the GVR facility. An $815 million bond package that died at the polls in 2015 would have paid for five pickleball courts at the county park.

Instead, Chris Cawein, director of Natural Resources, Parks & Recreation for Pima County, asked Blumenthal “whether GVR would consider the possibility of county infusion of capital to the proposed GVR Pickleball complex” in exchange for allowing some public access.

Blumenthal responded by saying the use of GVR facilities by non-members is “generally prohibited,” but the county could submit a plan for consideration by the GVR board.

Ultimately, however, the county did not pitch a plan and Deputy County Administrator Carmine DeBonis said no additional discussions were planned with GVR about non-member use of courts.

On Jan. 29, 2019, the Board of Directors approved, by a 10-2 vote, $1.25 million for the center's first phase of construction. Gail Vanderhoof and Tom Sadowski voted against the measure, saying they thought the question should go before the full Green Valley Recreation membership.

When the board awarded a $1.2 million Division II contract to begin work on an eight-court center in June 2019 they did so in a 11-1 secret vote, prompting a lot of jeers from the crowd.

After the meeting board president Charles Sieck said potential blowback from those in the Pickleball Club was a legitimate reason to call for a secret ballot and it was not a move toward secrecy.

"It's very rare that we would ever do something like that," Sieck said. "But because of the constituency of the Pickleball Club, they are very vocal and they attack anything that appears to be non-pro pickleball. For this particular circumstance, yep, it flies in the face of transparency."

Two months later, an $85,000 deal with BAJA Sporting Club was rejected 7-5 in another secret vote. The deal would have provided funds for an additional four courts, but it also would have given BAJA members access to GVR pickleball courts for eight years, whether they were GVR members or not.

During the meeting, board members stopped member comments and the decision to vote in secret prompted a chorus of jeers and shouts from the audience. The disorder nearly led to directors ejecting the entire audience from the meeting. There were more than 100 people attending the meeting with a large majority supporting the deal with BAJA.

Not satisfied with eight courts, the GVR Pickleball Club and GVR Foundation ultimately raised the more than $340,000 necessary to build out an additional 16 courts at the same cost per four-court sections as the eight approved by the board.

Staff will still have a few projects to finish after Tuesday. More signage is on the way and two shade canopies still need to be installed.

As far as staffing, the center won't have dedicated GVR representatives on-site. Blumenthal said there isn't enough in the budget to have someone permanently on-site at first, and the organization will have staff checking in on a rotating basis.

The accomplishment of taking the center from concept to reality isn't lost on GVR's project manager, Melanie Stephenson.

Stephenson said the center is an excellent addition to GVR and something the members will enjoy.

Despite the long road to getting the center ready for members, Blumenthal said he is pleased with the results.

"This was a pipe dream with the whole conversation, 'What are we going to do, how are we going to fund it,' for five and a half years," he said. "And it became even better. When I look back, all that angst about the board not giving enough money and only eight courts. To have people step up and turn it into a real center, it's even better."