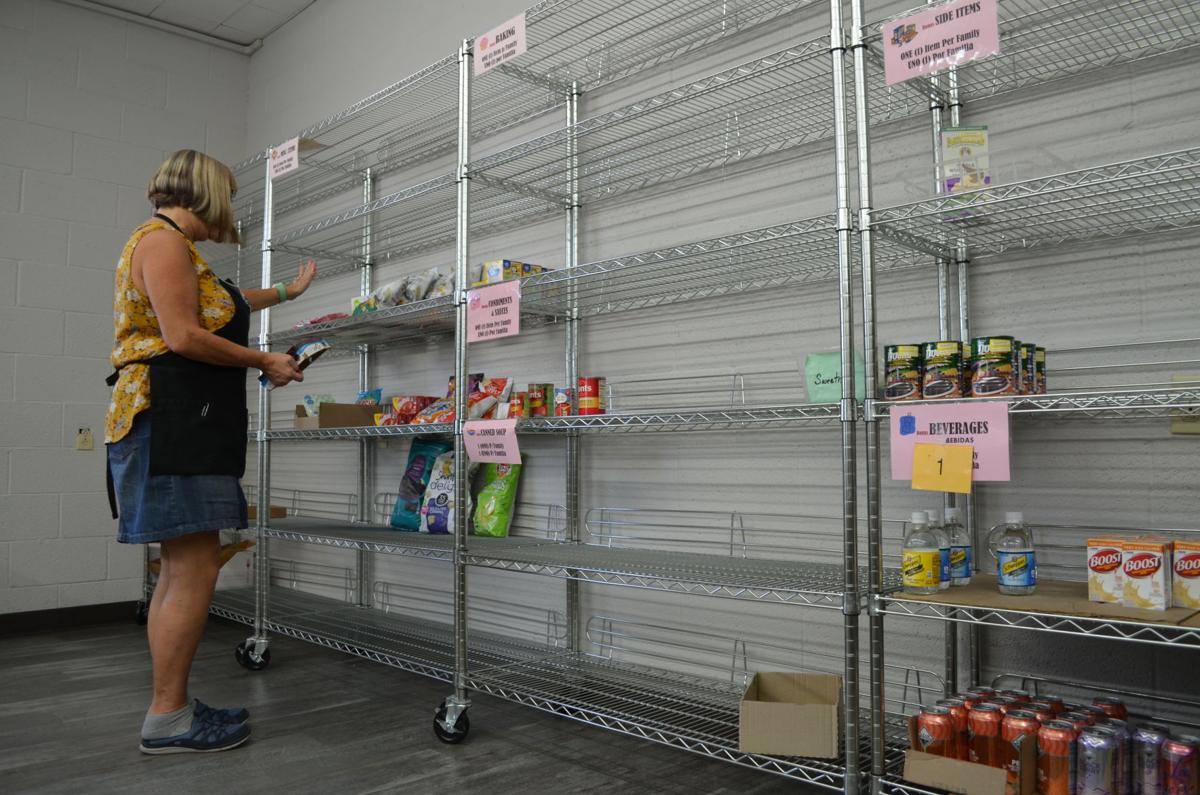 Lori Clemens, a volunteer at the Community Food Bank in Green Valley, rearranges the greatly diminished inventory at the food bank Thursday. 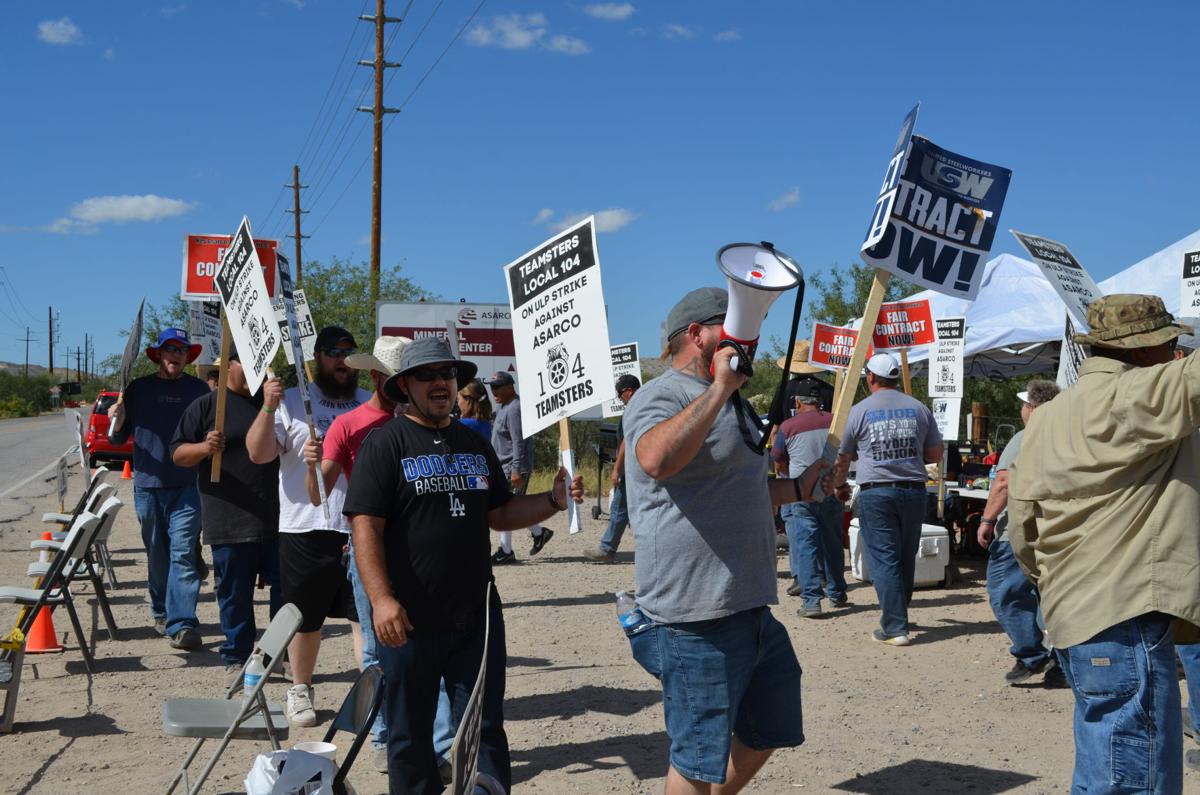 Roughly 500 people from Asarco's Mission Mine are participating in a strike that began Sunday, Oct. 13. 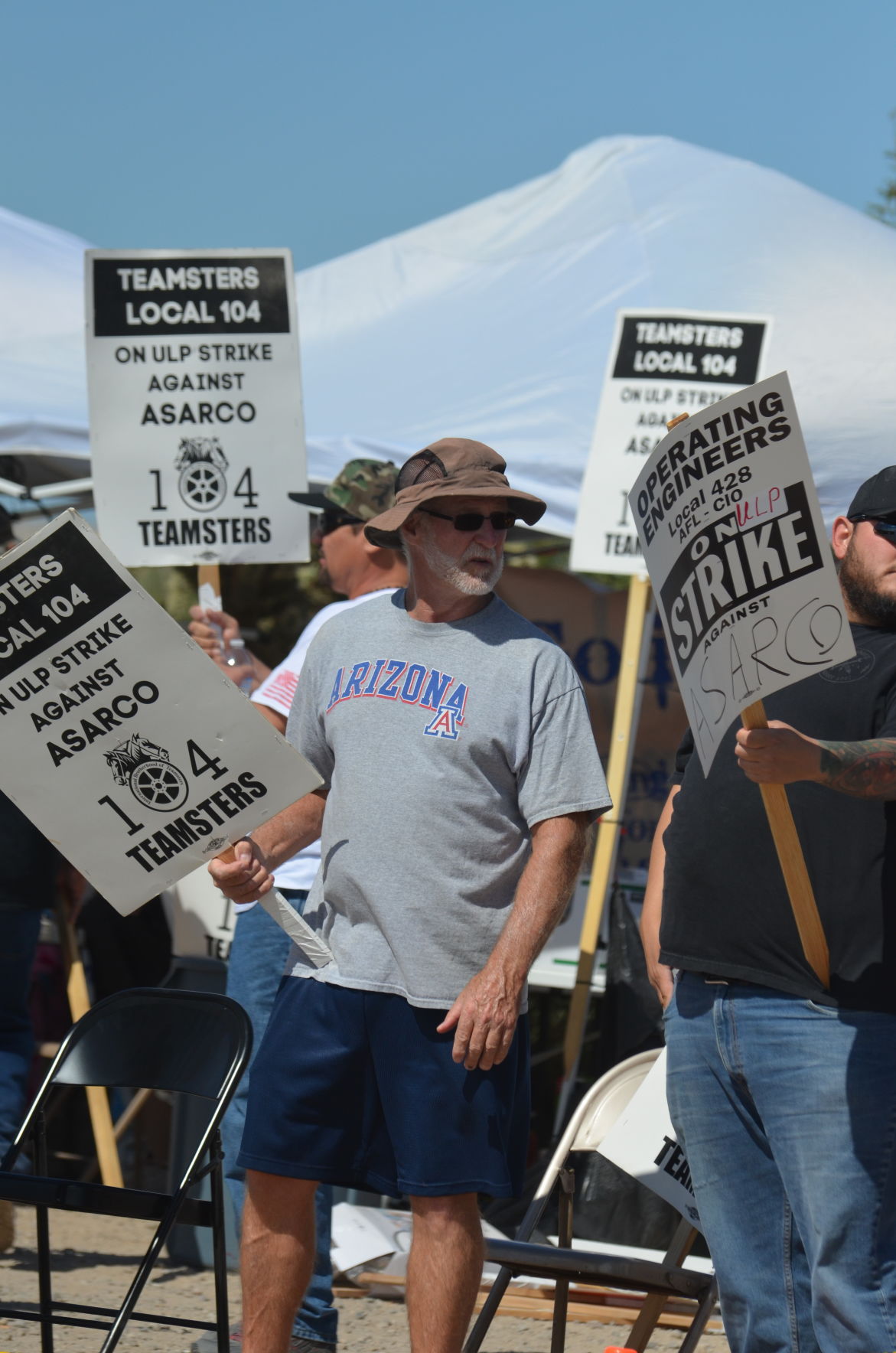 Green Valley resident Bill Foor is one of roughly 500 Mission Mine workers participating in a strike that began Sunday, Oct. 13.

Lori Clemens, a volunteer at the Community Food Bank in Green Valley, rearranges the greatly diminished inventory at the food bank Thursday.

Roughly 500 people from Asarco's Mission Mine are participating in a strike that began Sunday, Oct. 13.

Green Valley resident Bill Foor is one of roughly 500 Mission Mine workers participating in a strike that began Sunday, Oct. 13.

The Asarco mine strike is entering its second week today and with no end in sight, supporters are doing what they can to support the impacted families, including holding resource fairs.

More than 1,700 members from eight labor unions went on strike against Asarco and Grupo Mexico Oct. 13. Picketing is underway at Asarco’s four locations in Hayden, Kearny, Marana and Sahuarita – and at an Asarco refinery in Amarillo, Texas.

Seventy-seven percent of the workers voted in favor of the strike. Workers say they haven't received a pay raise in 10 years and they are seeking higher pay and better benefits. About 500 of the strikers work at the Mission Mine in Sahuarita.

The Pima Area Labor Federation is hosting a resource fair and town hall at Good Shepard United Church of Christ, 17750 S. La Cañada Drive, on Friday. The fair's hours will be 9 a.m. until 4 p.m. with two-hour information sessions at 11 a.m. and 2 p.m.

Penny Pestle, who chairs the Sahuarita Food Bank board, and Debby Acuña, manager of the Community Food Banks in Amado and Green Valley said their food banks will be on hand at the fair as well.

Pestle said the striking workers' health insurance will run out Oct. 27, which is also the last day they'll receive a paycheck, which will only be a partial paycheck.

She and Acuña are helping to spread the word about what resources are available to the them.

"Many of them have never been on strike before and they don't know what to expect," Pestle said. "We want to let them know that help is available and it's not a shameful thing to seek help. We want to encourage them to use the resources that are out there."

At that time, Acuña said 50 families registered for assistance at the Amado and Green Valley food banks.

The strike comes at a particularly tough time for the food banks, Acuña and Pestle said. They are seeing an increase in the number of families seeking aid and when they are trying to gear up for the holidays.

The Amado and Green Valley food banks and the Sahuarita Food Bank, combined, saw 200 new families come through their doors in August.

While the government is touting a great economy, Acuña said housing and food costs continue to increase and wages are simply not keeping up.

While it's unclear how many of the 500 Mission Mine workers live in the Sahuarita-Green Valley-Amado area, chances are still good the food banks will see an increase in customers. The picketers are required to put in a requisite number of hours on the picket line and many may stop by the food banks while they are in the area even if they live elsewhere, Pestle said.

"If we continue to see an increase in the number of families seeking help we will be stretched," Acuña said.

Both the Amado and Sahuarita food banks dispense 60,000 pounds of food monthly and the Green Valley location gives out between 100,000 and 110,000, the women said. During November and December, they distribute 25-30 percent more.

"We are always so grateful for the fact our communities always step up in times of crisis, like during the shutdown," hopefully community members will step up once again now, Acuña said.

"This is a very giving community and both food banks recognize we wouldn't be able to continue supporting those in need without their help," she said.

People in the area seem to recognize that at any point in time anyone of us could end up being the ones in need, Pestle said.

Green Valley resident Bill Foor, 63, has been working for the Mission Mine for four years. While he feels fortunate to have some savings, he said he and his wife will be cutting back on their expenses and foregoing extras.

He was aware of the upcoming resource fairs and said he's glad to know the food bank is there, should they need it.

Paul Stapleton-Smith, chairman of the Pima Area Labor Federation, AFL-CIO, said he is grateful to all of the area food banks. During the government shutdown, they helped feed 25,000 federal employees.

"We don't know what our families will be facing yet, but we do know that they aren't going to be alone," Stapleton-Smith said. "Our attempt in the coming weeks is to make sure these families remain financially stable, that no one goes hungry, no one misses an insulin shot and that no one gets an eviction notice or misses a mortgage payment."

Two other resource fairs will be held Tuesday and Thursday in Tucson.

The Sahuarita and the Amado-Green Valley food banks are seeking donations. Among the items they would like to receive:

Non-perishable items can be dropped off any time in the donation bin near the entrance of the Sahuarita Food Bank at Good Shepard Church, 17750 S. La Cañada Drive. They also accept perishable items with an appointment. 668-0547.