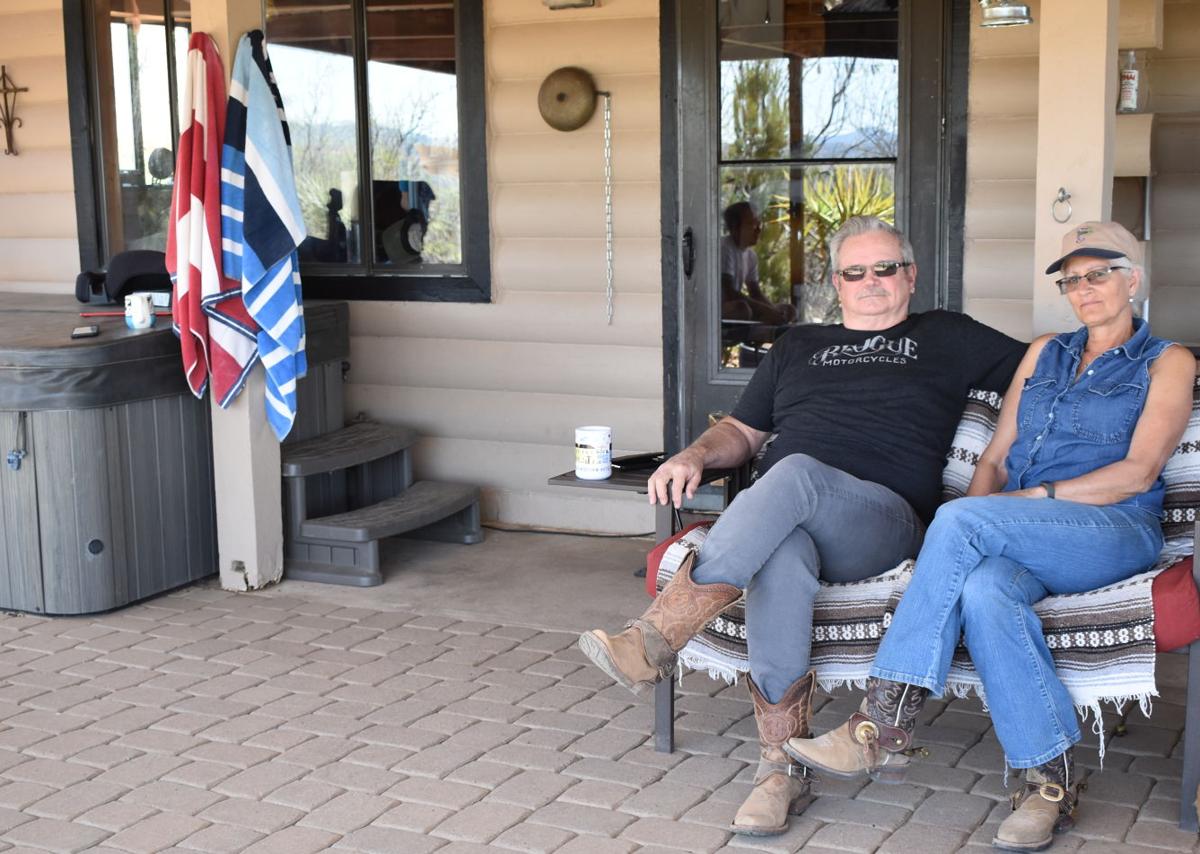 Karl and Audrey Hoffman sit at their home off Arivaca Road where they have hunkering down during COVID-19. 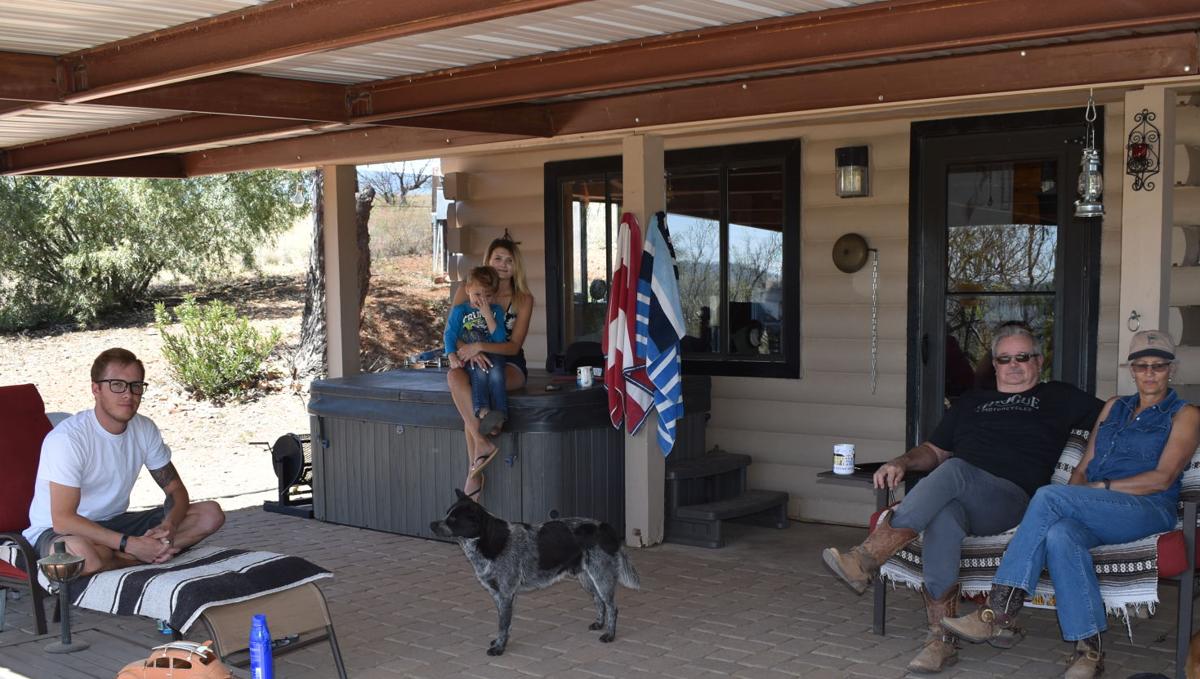 The Hoffman family works together at the Art Gallery H in Tubac and are hunkered down in Arivaca. From left are Colt, Sharlena and her son, Karl and Audrey. 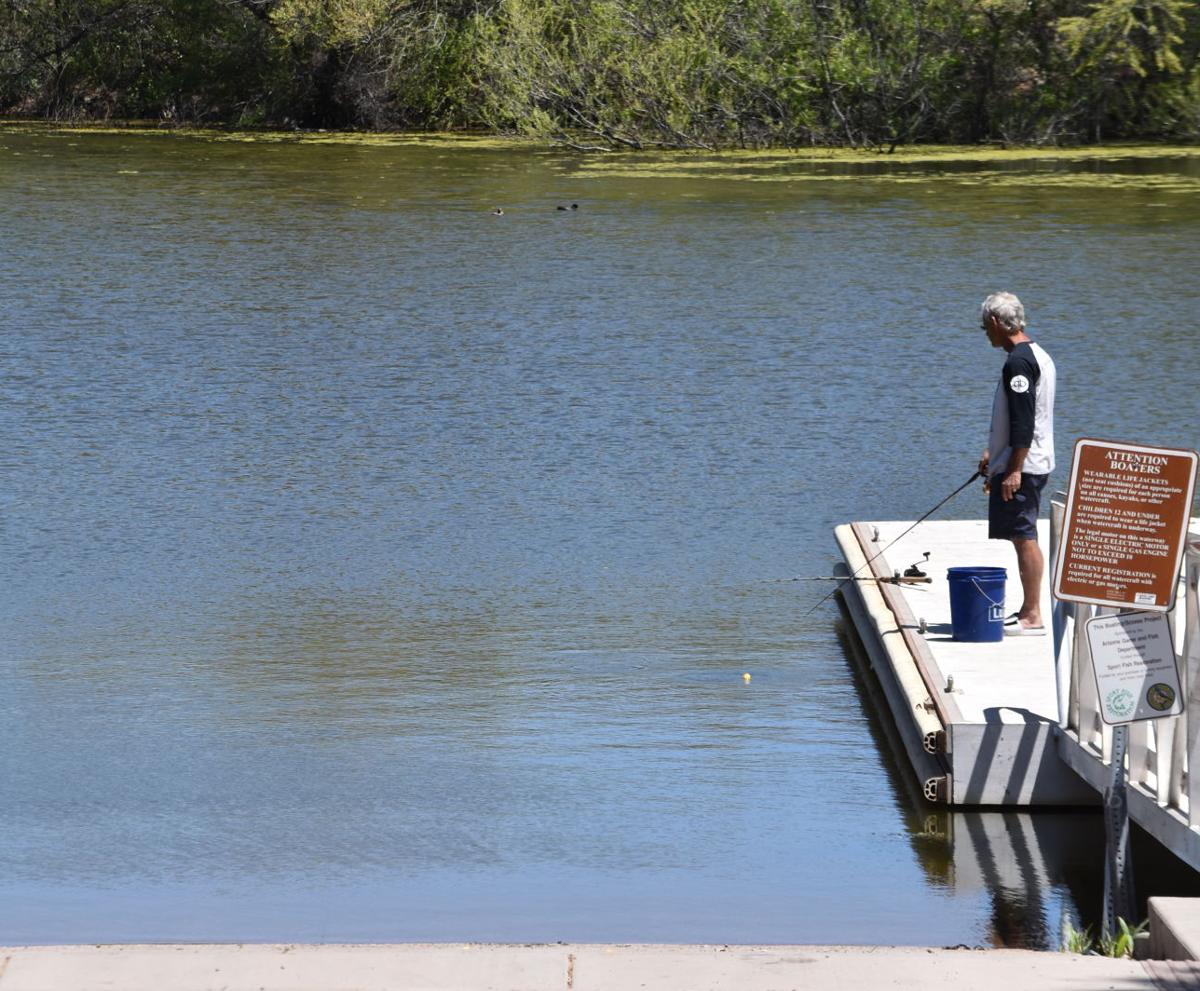 Arivaca Lake has become a destination for out-of-towners looking to escape into the outdoors. 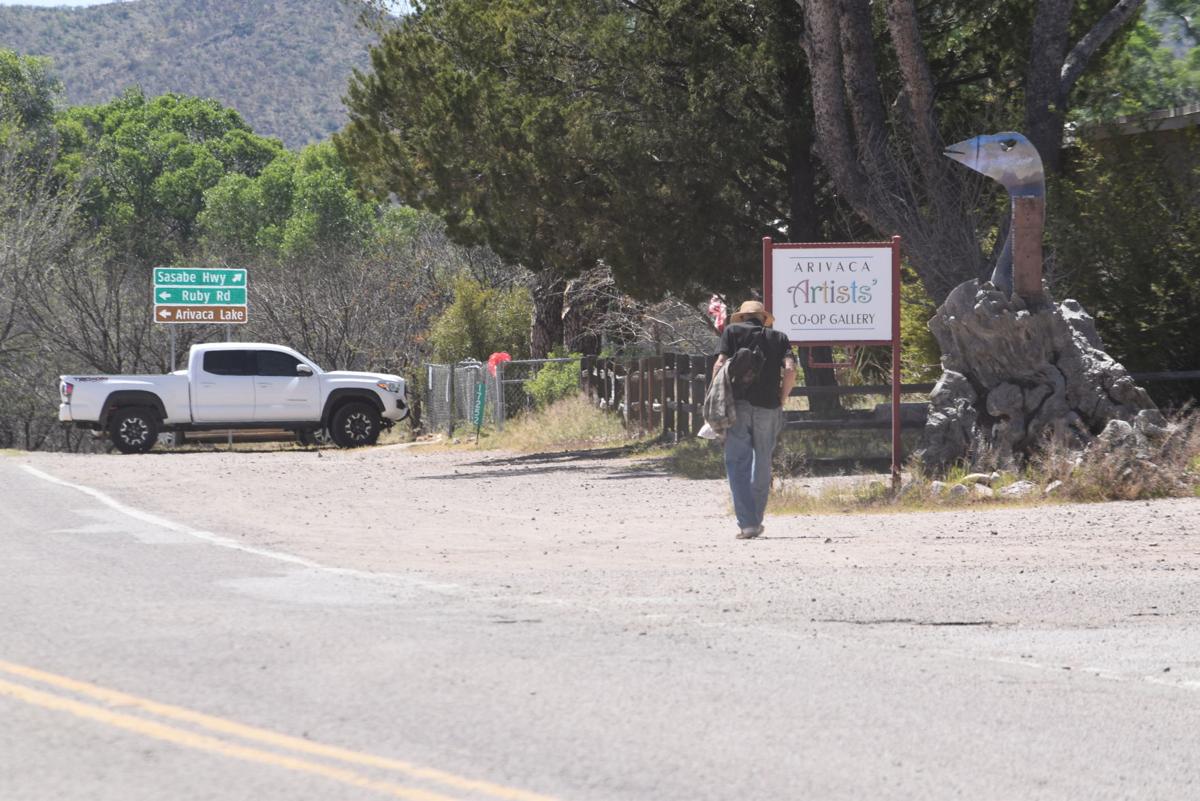 Most Arivaca businesses have closed down and many residents are staying at home.

We have lifted the paywall on this story. To support essential reporting, please consider becoming a subscriber.
1 of 4

Karl and Audrey Hoffman sit at their home off Arivaca Road where they have hunkering down during COVID-19.

The Hoffman family works together at the Art Gallery H in Tubac and are hunkered down in Arivaca. From left are Colt, Sharlena and her son, Karl and Audrey.

Arivaca Lake has become a destination for out-of-towners looking to escape into the outdoors.

Most Arivaca businesses have closed down and many residents are staying at home.

Daily life hasn’t changed much for the Hoffman family since COVID-19. On their property off Arivaca Road, they’re hunkered down with about all the supplies they need.

“The whole family is here and luckily we’re a tight group,” said Karl Hoffman. “We’ll survive. We are used to working together.”

Confirmed cases of COVID-19 haven’t come to the rural community of Arivaca yet, but many of the residents can be spotted in masks and the main street in town has fewer people.

The bar is closed to sit-down service, though you can still buy to-go bottles and food, restaurants have switched to take-out service, and the Mercantile is still a major stop.

Karl and Audrey Hoffman own the Art Gallery H in Tubac, which they run alongside their son Colt and daughter Sharlena. For the family, closing the gallery has been one the hardest parts of COVID-19.

It was a loss of income and a loss of social normalcy.

“I do get stir crazy but keep busy with jewelry and artwork, but I miss the gallery and our customers, those interactions,” Audrey Hoffman said.

The community is used to taking care of themselves and the Hoffmans said locals are pretty stocked up. But they have noticed an influx of people not from the area.

“The little market remains steady, the bar does takeout, locals will survive out in middle of nowhere,” Karl Hoffman said. “It's the out-of-towners to be afraid of. Rural communities which are safe and cuddly are now being targeted by out-of-towners.”

Residents have spotted license plates from all over heading in droves to Arivaca Lake, so much so that the Hoffmans and other locals are staying away or sticking to less-traveled places.

The family can often see rows of cars heading down the road in the morning with boats and campers. Many visitors make the Mercantile their first stop.

Colt Hoffman said the lack of guideline observance he’s seen at the lake or in the visitors coming into the town is alarming.

“We have to step up to the plate, it’s the only way to actually get over this and people need to get to that level,” he said. “We've never seen something like this.”

He spends a lot of time outdoors doing photography and vlog posts, and many spots on the lake are crowded.

“With this whole social distancing thing, staying home in the middle of nowhere you’d think you’re safe, but on a trail how do you keep distance,” he said. “You’re bottlenecking in all these places that are not that safe.”

Karl Hoffman called his son the chief of security and germ warfare of the house, though daughter Sharlena, who just moved to Arivaca from Colorado where she was a certified nursing assistant, plays a big part in it too.

“I was working at a hospital and also a nursing home and when COVID hit I came down to where there’s less people and to be with family,” she said.

She moved a month ago with her son.

Resident Dan Kelly has lost a friend to the virus, and has several others fighting for their lives.

He’s been adhering to safety precautions before social distancing guidelines were released. His fiancée had been traveling to family outside the state and began wearing masks in town before anyone else just in case she was a carrier.

“She’s 70, I'm 74, and she was worried to death about me,” he said. “I have emphysema and when she came back into town she wore a mask every time she went to the Mercantile. At first there was some good-natured ribbing back before any of this had currency.”

They began to see a need in the community for masks and got to work buying up supplies. They started by bagging up masks for families, loading them into a milk crate where people could come pick them up.

They have since partnered with the Mercantile to distribute even more masks.

As of Thursday, the Mercantile had received about 138 masks and about 300 free masks have gone into the community.

Now, the Mercantile offers a free mask to each person who enters the store.

Kelly said most people have taken them and been responsive to the project.

The real message that sticks with him about Arivaca is a sense of togetherness, people coming together to support one another despite their differences.

“Arivaca is a peculiar community, a wacky culmination of cowboys and ranchers to hippies to retired folks and we tend to pull together when there are community concerns,” he said. “There’s a lot of compassion regardless of politics, we work together.”

He pointed to other community goods, like a clergy coordinating medicine pickups, locals helping each other get fresh produce and the work of Arivaca Human Resources.

Kelly’s team of mask makers will keep sewing until they run out of elastic, which is almost impossible to get ahold of at the moment. He encouraged neighborhoods to look out for each other.

Linda Burns is the manager of Arivaca Human Resources, an organization which provides those in need with energy assistance, food, clothes and personal items.

She has also seen the town come together to help each other since the virus.

“This town is extremely lovely and compassionate, that’s one thing everyone from Arivaca recognizes,” she said.

Since COVID-19 hit the state, they have seen an increase in demand, particularly emergency food boxes.

They are serving about 90 hot meals a day and 50 to 60 emergency food boxes a week.

For their food supply, they look to food banks, like the one in Amado. She said it’s been difficult to get proteins that need refrigeration, but they have been able to get most of what they need.

They have benefitted from surpluses of produce in Nogales sitting in warehouses, unable to be delivered due to impacts by the virus. The National Guard even distributed produce to them.

She has also seen more visitors to the town seeking escape.

“Motorcycle groups or other travelers arrive at the grocery store with no social distancing, no masks,” she said. “We work hard to keep the town clean and virus-free. If you come into town, wear your mask, gloves and stay six feet away.”

Damon Goodmanson, owner of the Mercantile, said there have been a number of people coming to town to escape.

Business has remained steady but they haven't struggled to get products into the store other than typical items like toilet paper and hand sanitizer.

“It's been going pretty good here and we are just here to keep serving the community,” he said.

La Gitana Cantina, the town's local watering hole, is a popular place for people to meet. The bar and restaurant have been on the main drag for 70 years.

They have switched to a take out only format, doing carry out meals and to-go beer and liquor.

They are seeing about a fraction of the business they had pre-COVID but are optimistic they can survive through this.

Owner Maggie Milinovitch said they still have regulars supporting them.

"We're one of the only places to get some food beside the market," she said. "We are weathering the storm and we're going to try our darnedest to get through this."

As far as she can see, Arivaca is doing well considering the situation.

The kids are alright

One of Arivaca’s regular hubs of activity is the Community Center, which provides activities for youth, seniors, resources, meals and a space to connect.

They have since closed due to COVID-19 but coordinator Ellen Dursema is trying to remain in touch with the youth who meet there.

She’s called all the kids in the program on her own time to touch base.

“I had wondered if they were fearful seeing people walking around in masks and going through some trauma,” she said. “The only negative is that they miss me, they miss us getting together. It wasn't all scary.”

Kids in Arivaca have been enjoying time at home, gardening, playing video games or watching their chickens hatch. It's a big shift for Arivaca youths who are used to a long bus rides to and from school.

Dursema has been staying at home. At one point, she was concerned she might have the virus and got tested to confirm she was virus-free.

Though she knows many residents who are also practicing social distancing, community members miss each other.

“I live on Arivaca Road and still hear a lot of traffic, a lot of people getting out of town,” she said. “So far, so good in Arivaca and I think we’re doing fairly well, we’re at least being cautious.”

The Hoffmans see the COVID-19 outbreak as an all for one, one for all situation. Isolated together, they know if the virus slipped in it would crumble them.

“We have a very sterile environment and I have heart problems. It would kill me,” Karl Hoffman said. “We have a little boy here and any of us, even Colt who’s healthy, could get it, so we have to be really careful.”