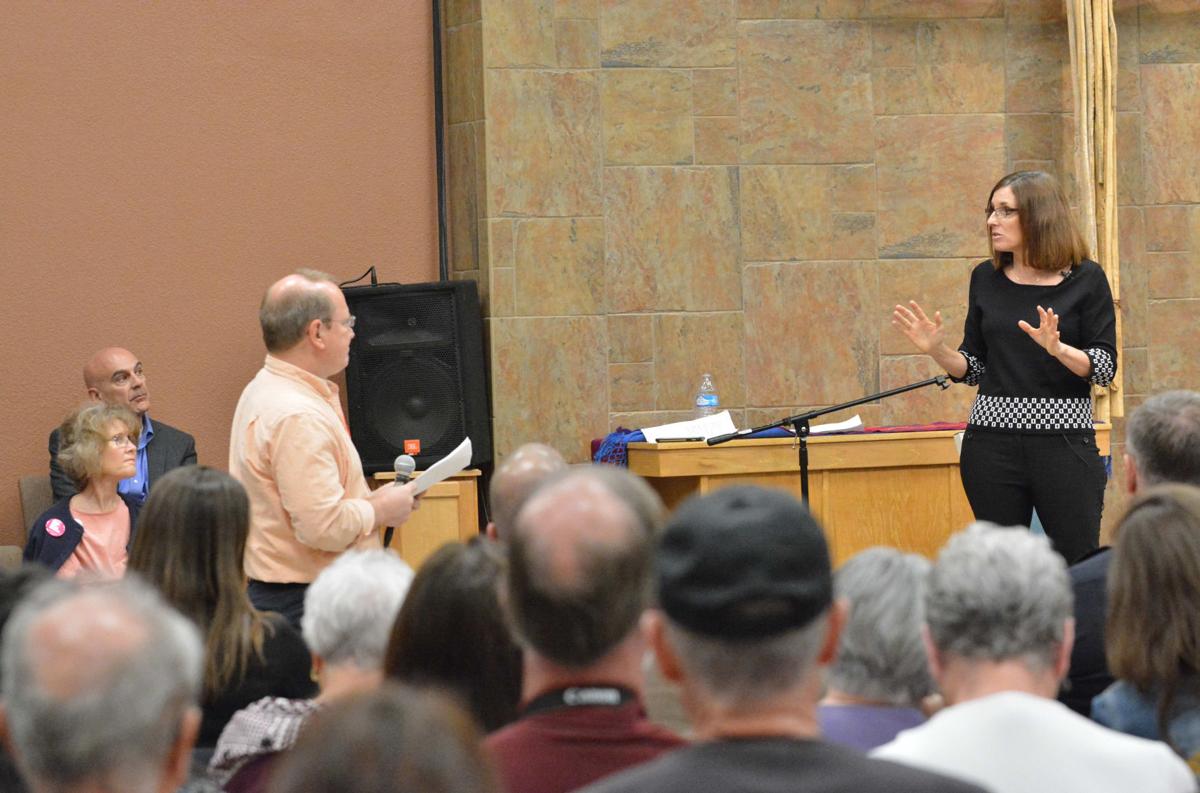 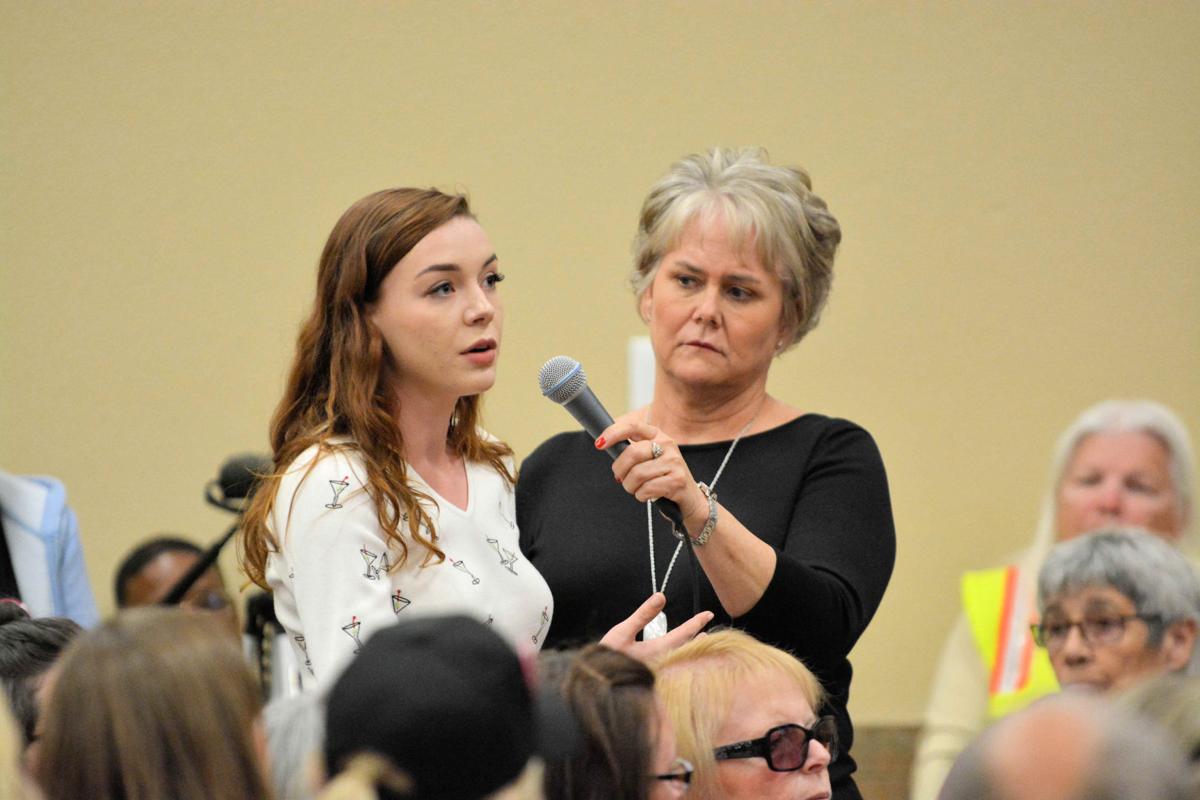 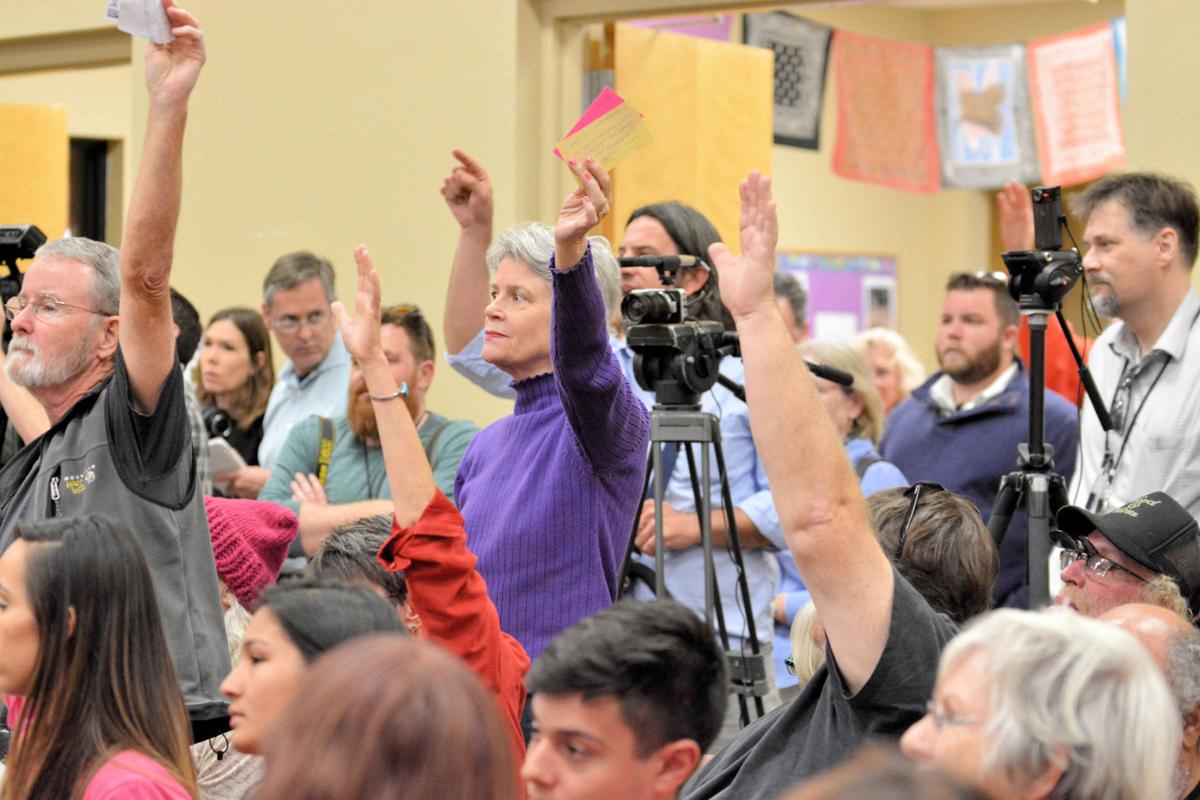 The event drew more than 250 people to Good Shepherd United Church of Christ in Sahuarita. Hundreds more didn't make it into the building.

The event drew more than 250 people to Good Shepherd United Church of Christ in Sahuarita. Hundreds more didn't make it into the building.

The mood was often tense and argumentative, but clamors for U.S. Rep. Martha McSally to stand in front of a room full of constituents were answered Thursday.

More than 300 people packed Good Shepherd United Church of Christ in Sahuarita for the congresswoman's first in-person town hall since her re-election in November.

The meeting, organized by the Green Valley News and Sahuarita Sun, followed weeks of groups such as Indivisible Southern Arizona and McSally – Take A Stand calling for McSally to hold a public meeting. The congresswoman held two telephone town halls, on Feb. 7 and Feb. 14, which her office said reached more than 4,000 constituents.

Thursday's town hall coincided with a separate event in Tucson hosted by McSally – Take A Stand and Indivisible Southern Arizona that the congresswoman declined to attend. Though 400 people committed to go to that town hall, which featured an empty chair in place of McSally, actual attendance was just above 300 as some chose to travel to the Sahuarita forum. The Green Valley Fire District said 315 people were in the church.

The meeting came a week after Utah Republican Party chair James Evans urged GOP members of Congress not to hold town halls after what he called “thuggish behavior” at an event for Utah Rep. Jason Chaffetz on Feb. 9. Others in the GOP had expressed concerns about Democratic activists pushing for town hall meetings so they could embarrass and harass Republican lawmakers, and national media rolled out video from contentious meetings across the country all week.

That attention drew media from across Arizona and the country to Sahuarita on Thursday, where many in the audience wore name tags with their ZIP codes to show they were constituents; a majority appeared to be from Tucson. Hundreds of others who couldn't get in stood outside the door and could clearly be heard chanting and yelling throughout the 90-minute event. One estimate put the total crowd inside and outside at about 800.

McSally did not waste time before diving into the questions, forgoing opening remarks to get to what the audience wanted to discuss, though her answers weren't usually what they wanted to hear.

She did seemingly try to weave around some questions, such as when she was asked about Education Secretary Betsy DeVos. The congresswoman spent a few minutes talking about her support for education and the cost of college before calls for an answer from the crowd led her to say that the Senate has the role to confirm nominees, not the House.

“We will see what comes out of her department; she's been appointed,” she said.

She also said she supports House, Senate and FBI investigations into possible connections between President Trump, Russia and the 2016 election. She said she would not call for an independent investigation yet.

Boos and jeers were frequent, including when McSally said she believed the best approach to education was somewhere between vouchers and public education. More followed her opinions of the Affordable Care Act and her desire to replace parts of it with refundable tax credits and a statement that “single payer is not the solution.”

However, she also said that the repeal of the ACA would not be in one fell swoop, but she envisioned a transition of two, hopefully three, years to allow everyone “continuity and predictability” and a “soft landing.” She reiterated from her tele-town halls that the replacement would be done through changes from the secretary of Health and Human Services, budget realignments and some legislation.

On the issue of defunding Planned Parenthood, her statement that similar services could be found at community health centers, which also receive Title IX funding and she claimed were more abundant, was met with raucous disagreement by the audience. McSally acknowledged that she had never gone to a Planned Parenthood clinic but stuck by her assertion that Title IX funds for women's health services were still available through community health centers.

“This is again about services, not the entity,” she said.

When asked about Trump rolling back Title IX protections for transgender youths, McSally said she felt those guidelines were federal overreach, and that those policies should be a state issue, which caused the audience to erupt in boos.

McSally also gave answers that were met with cheers from what obviously was a largely opposition audience. She said she is firmly committed to defending Social Security and Medicare, and pointed to one of her early votes against a Republican budget that would have made cuts to those programs. On immigration, she said several times that the country needs to revamp its policy to make it easier for people to enter the U.S. legally, and acknowledged the value of immigrants to the nation.

And while disagreeing with President Obama's specific actions on children brought into the country illegally, known as Dreamers, she said she wants to work to fix the system “in the long run” so they can gain citizenship.

On climate change, McSally said she believes the climate is changing and that humans have played a role. She also said new technology has decreased CO2 outputs over the past couple decades, including clean coal.

The mood of the meeting was set early when McSally was asked to assess President Trump's first month in office, his cabinet appointments and policies. She called it “a tremendously bumpy rollout,” adding it was not well-coordinated and not well-implemented. She said Sen. John McCain's characterization of Trump's administration being in disarray was probably too strong.

However, she added, “it's not my job to be a pundit,” and that she was in Congress to legislate and do her job.

“He's our president, what are we going to do about it?” McSally asked.

“Impeach him!” the crowd roared back.

In an appearance on The Buckmaster Show radio program Friday, McSally said the town hall, moderated by editor Dan Shearer, got a little heated and rowdy at times, but was largely successful. She said the audience represented the ideas of just half the constituents in her district, but she is their congresswoman and needed to hear from them.

“Look, I get that a lot of people are frustrated and angry over a few things right now, but again we have to keep that in the context that half of my district felt that way eight years ago,” she said, reiterating a point she made in Thursday's town hall.

Comments from those who attended Thursday's town hall meeting in Sahuarita.

Richard Chamberlin: “I think it went well. People were civil. There were good questions and people showed their passions.”

Joan Pevarnik: “I think she is a straight-line Republican. She now sees how many people are frightened by the new president.”

Maddy Urken: “The event was very instructive. She’s going to win the next election. She refuses to answer questions even when a child ask them.”

John McCoy: “The event was orderly. She talked around the questions. I don’t know where she stands on health care or immigration or the environment.”

Mary Ellen Noel: “It went as I expected. No bad comments. She could have been more clear with her answers.”