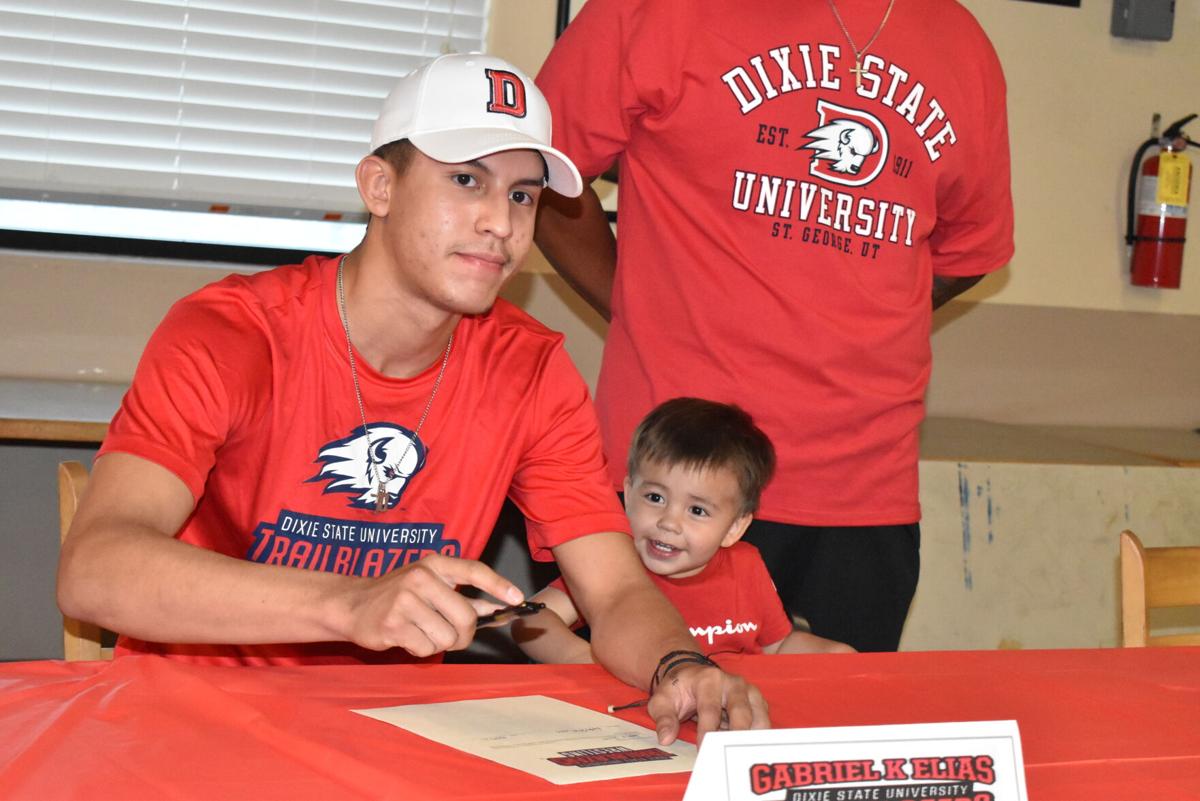 Gabe Elias, 17, with son, Giovanni, 21 months, signs his letter of intent to wrestle for Dixie State University in Utah. 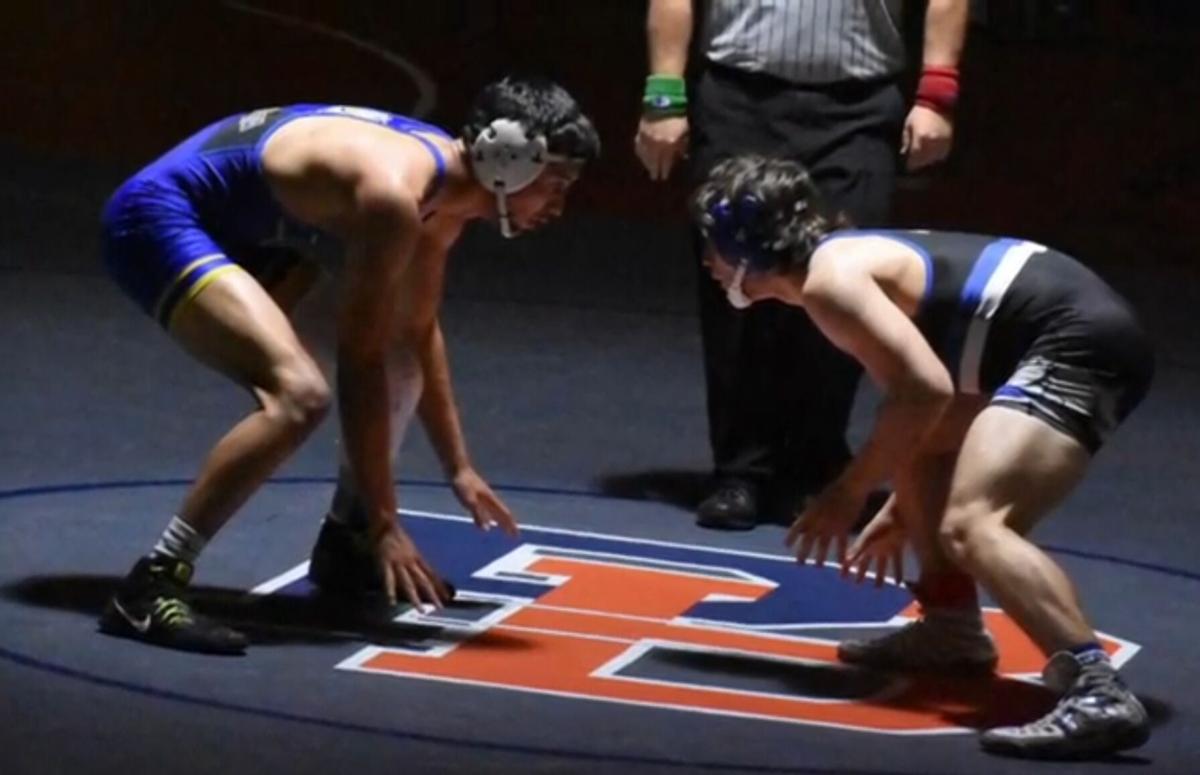 Gabe Elias in his final match as a high school wrestler, in the 2021 state championships. 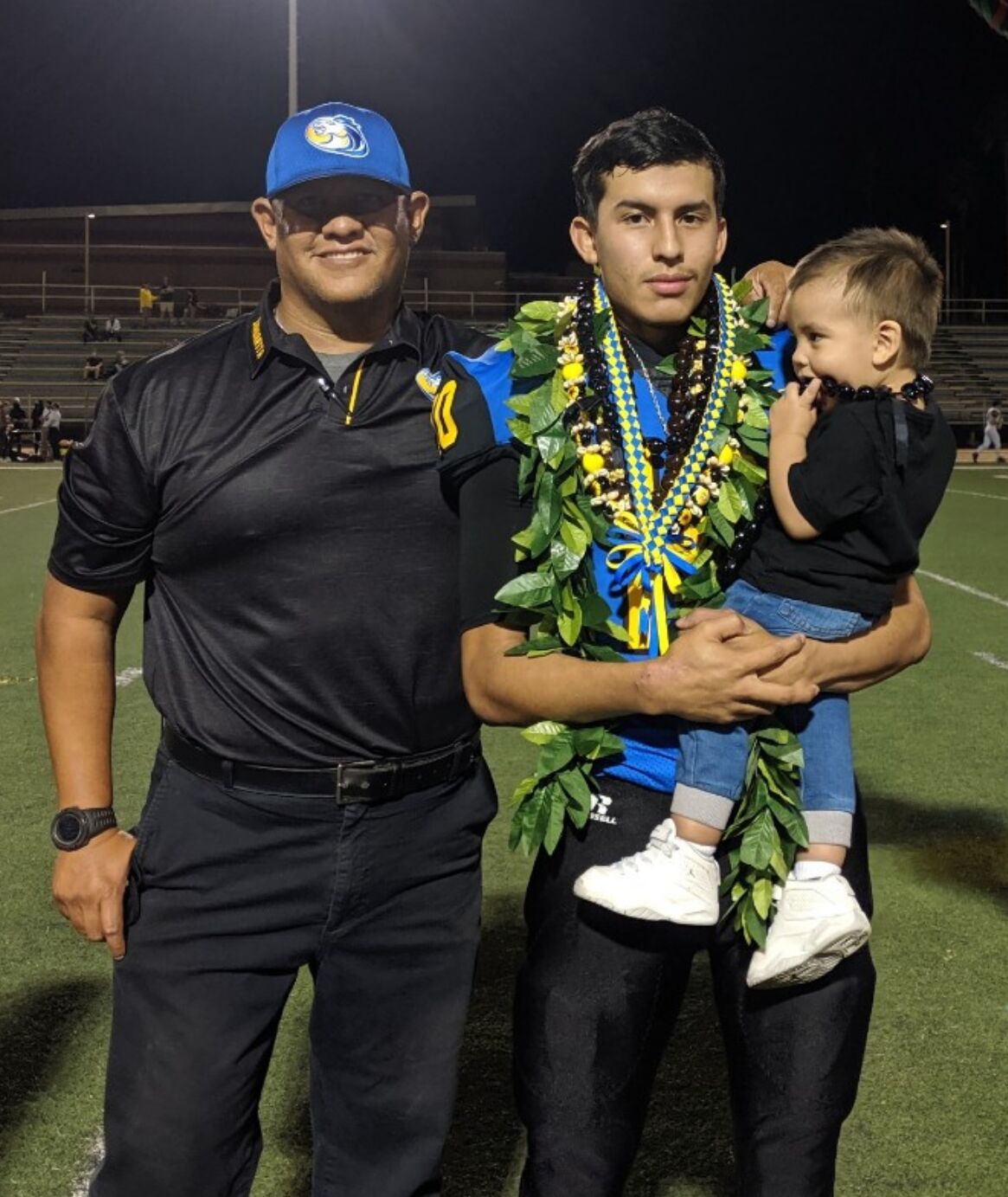 Gabe Elias holding his son, Giovanni, with his father, Mario. 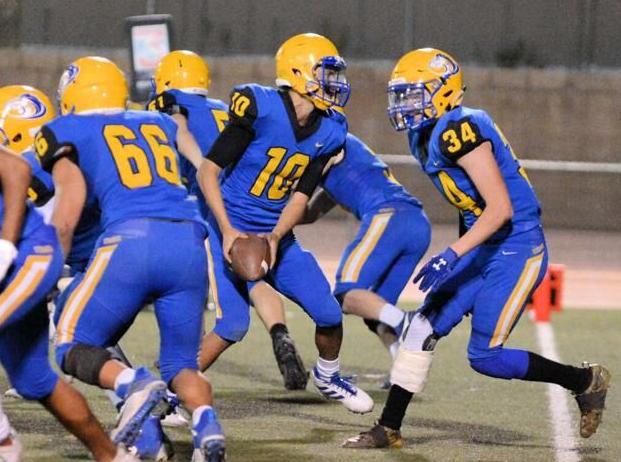 Gabe Elias (10) pitches the ball during a game against Amphitheater last fall. 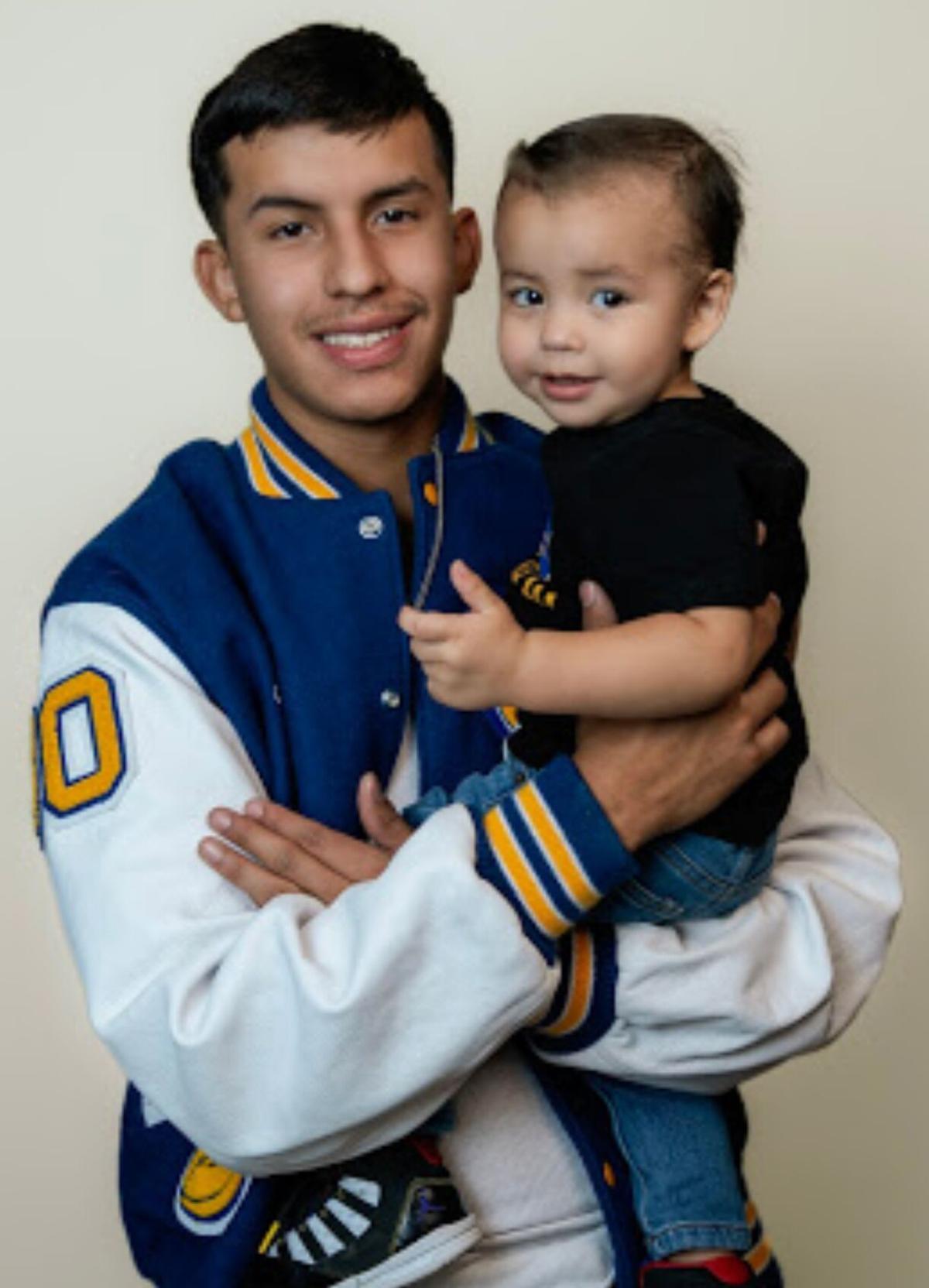 Gabe Elias and his son, Giovanni.

Gabe Elias, 17, with son, Giovanni, 21 months, signs his letter of intent to wrestle for Dixie State University in Utah.

Gabe Elias (10) pitches the ball during a game against Amphitheater last fall.

Gabe Elias remembers getting the letter in the mail in the summer of 2019.

A couple of weeks after turning 16, and just a few days before starting his junior year, the Sahuarita High School star wrestler and football player found out he was a dad.

His son, Giovanni, was born July 6; the letter from a lawyer was the first he knew of it.

The news could have been devastating to a young man whose life was built around sports and landing a college scholarship. Instead, it gave him motivation, focus and perspective. And with a lot of help from his family, he found he could still hold on to some of his dreams.

“At first I was filled with negative thoughts, but I was thankful to have parents who supported me and they understood that it’s life and we’ve got to play the hand that’s dealt,” he said.

“I can’t picture my life without him now.”

It was all about football and wrestling when Gabe Elias was growing up. He played on three Pop Warner teams and wrestled at Anza Trail middle school. He was good and he had a future, he just didn’t think it would come at him so quickly.

Gabe made the varsity wrestling team as a freshman in the 132-pound weight class where, he said, “I took my fair share of beatings.”

“It was a rude awakening going into high school,” he said. “It really humbled me because I thought I was going to come in and do really good just because I did good in middle school. But then I came in and I got thrown in with a bunch of grown men who were in my same weight class and I was still a little boy.”

He finished the year with a 9-12 record, plenty of bruises and a lot of valuable lessons.

“I learned that it was a whole new level of dedication at the high school level, and I really needed to take it more serious in the off-season. I had to really dedicate myself to the weight room and not missing practice and making every day count that I could.”

It paid off as a sophomore, where he won just over half his matches and fell one win short of qualifying for state. But everything was on track, and Gabe was soaking up the good coaching.

“I definitely had a big improvement,” he said. “We got a new coach and they introduced a new philosophy and the whole team bought into it.”

That summer, he found out about Giovanni and, for just a moment, everything screeched to a halt.

A chance to grow

In a time of uncertainty, Mario Elias knew one thing — he was going to support his son, Gabe.

“I knew the kids at school would accept it,” the retired state prison worker said. “I was going to do everything to make it happen for my son. We were going to be there until he said he couldn’t do it anymore, and he’s never tapped out.”

Gabe said it’s because his son was “a blessing in disguise.”

“Once he was introduced to my life, that’s when I started doing a lot better. I found a whole new motivation and I just really want to make him proud,” he said. “He gave me something to work for.”

As Gabe Elias got to know his son, he got to know himself. He started to peak as a wrestler, finishing third in the section and sixth at state despite torn ligaments in his foot. But the changes were also evident beyond the gym. His junior year of high school saw the B-student earn Academic All-America status.

He started planning a future for two — him and his son. That meant facing some realities and making hard decisions.

“Going into my junior year I started to realize I could go a lot farther in wrestling,” he said. “There aren’t a lot of colleges that look at a 5-foot-9, 150-pound kid for football.”

While he hung on for two more years as a high school football player — what he calls his first love — Gabe Elias knew wrestling was his ticket. He put all his energy toward his senior season while raising a son half-time and holding down a part-time job. With his parents’ support, he never missed a practice.

COVID-19 stole the headlines in 2020, but Gabe Elias’ perspective was shaped by other forces.

It isn’t the senior year he expected, but he took it in stride. The football season was shortened to just three games, they wrestled wearing masks and time with friends was cut short.

While some teenagers bemoaned the loss of milestone moments, “I was just thankful for whatever we could get,” Gabe said.

But by then, his world was a lot bigger than a high school campus. He was a growing into the role of dad, and he enjoyed it.

“He definitely brought a lot out of me and a there were a lot of emotions that I had bottled inside of me as a young teenage kid,” he said. “Having him in my life has really taught me how to appreciate things more and hard situations like my senior night of football or state wrestling, those are big, big moments. But then I get to look into my son’s eyes and everything is so simple.”

The state tournament didn’t go as Mario and Gabe Elias expected. He lost in the finals to a powerhouse freshman from Safford.

“It was heartbreaking. It was really hard but I knew that I couldn’t have done anything more. All the work had been put in,” he said.

The wrestler who beat him had earlier handed Gabe his only loss of the season at sectionals.

“After the match I gave him a hug and told him, ‘You’re the future of Arizona wrestling. Celebrate this but just know that you have better things to come for you.’”

The same thing could be said of Gabe Elias.

With his wife, Jen, at his side, Mario Elias choked up as he stood and spoke Thursday night at Triple Play in Sahuarita.

At the table in front of him were his son, Gabe, and grandson, Giovanni. In front of Gabe was a letter of intent to wrestle for Dixie State University in St. George, Utah, where he plans to study psychology.

It’s the beginning of a new life for both men. Mario began coaching Pop Warner teams 17 years ago when his daughter, Danielle, was a 6-year-old cheerleader. She’s a nurse now, and Gabe calls her “the person I turn to no matter what.”

Now, he’s a grandfather and calls Giovanni “the heartbeat of our family.” Gabe calls his son “a wild child” who loves to throw whatever he can pick up. Pop Warner can’t be far off.

Gabe says he’s grateful he could stay involved in high school sports and that it’s now going to help him build a future. He’s also grateful for the journey of the past couple of years.

“Of course, I can’t live a normal teenage life,” he said. “But it’s definitely helped push me to a level of maturity that I’m glad I got to see this young because I feel like it takes a lot of people a long time to realize it and some people don’t realize it till it’s too late.”