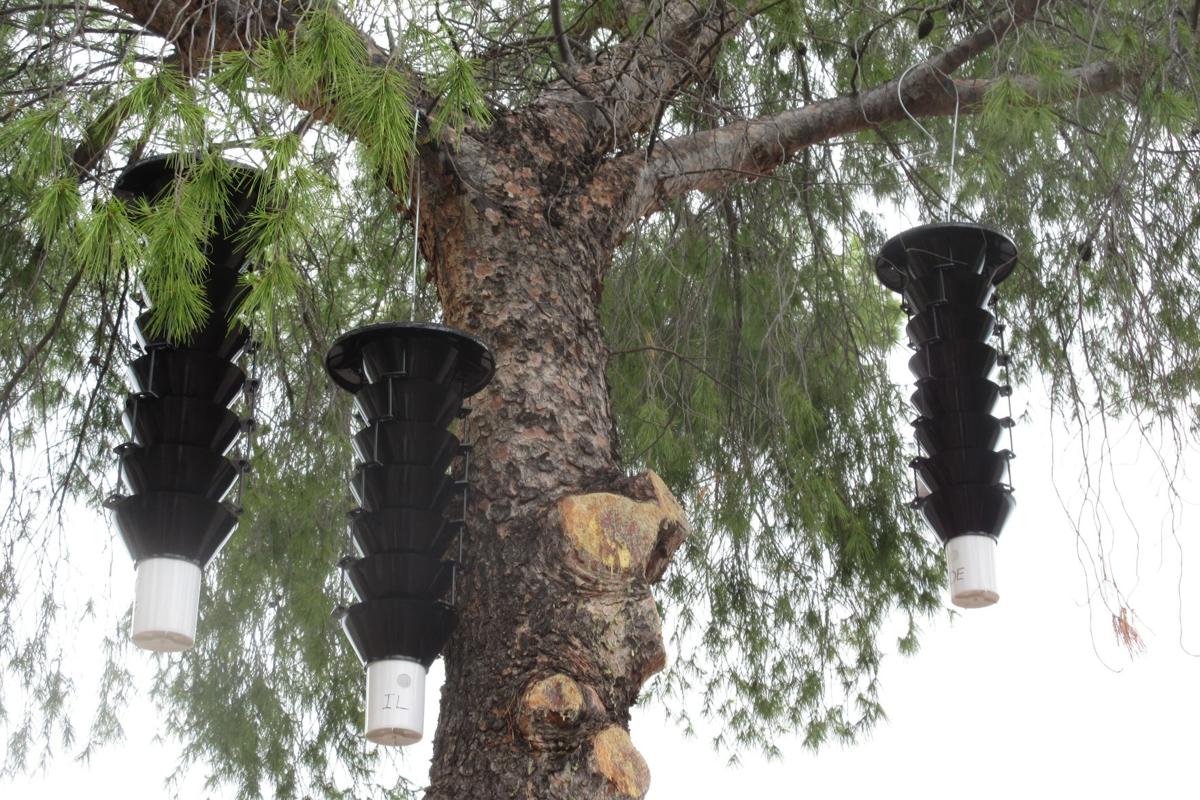 Three traps went up in a Green Valley pine tree near Desert Meadows Park on June 29, each targeting a different bark beetle species. 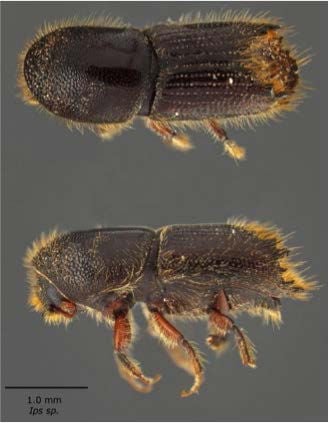 The six-spined engraver (Ips calligraphus ponderosae) is the only species detected, so far, in Tucson, according to UA College of Agriculture & Life Sciences Cooperative Extension.

Three traps went up in a Green Valley pine tree near Desert Meadows Park on June 29, each targeting a different bark beetle species.

The six-spined engraver (Ips calligraphus ponderosae) is the only species detected, so far, in Tucson, according to UA College of Agriculture & Life Sciences Cooperative Extension.

To most people, three funnel-like objects dangling from a pine tree in Chuck Parsons' yard near Desert Meadows Park might look like bird feeders, watering devices or, as some neighbors surmised, bat houses.

They're actually traps set to attract three distinct bark beetle species to determine why they're showing up at much lower altitudes than previously, said University of Arizona student Fernando Lopez, who is helping in the research.

They are among 11 “ips” genus insect species that live in the inner bark of Arizona conifers, all of which can badly damage and kill trees, according to a December 2015 article co-written by entomologist Peter Warren, urban horticulture agent with Pima County Cooperative Extension. He is overseeing a Tucson-region study; Lopez is helping check traps in pines around town, including at Parsons' Green Valley property.

Typically, the industrious diggers are found at elevations of 4,200 to 9,000 feet, but of the three targeted by the traps, calligraphus ponderosae (the six-spined engraver) is the only one detected in Tucson at around 2,400 feet, marking the first time native bark beetles have been seen in non-native pines in the Sonoran Desert.

They attack weakened or stressed trees compromised by drought, lightning strikes or windfall. Here, they've generally been seen in Aleppo and Afghan pines poorly irrigated, damaged by lightning, soil compaction, root damage or other non-biological means. Parsons, who has both pine varieties in his yard, may have trees at risk. Potential host trees also in the area may also include Chir and Canary Island pines, according to the cooperative extension article.

The beetles presumably arrived through movement of infested, green ponderosa firewood from higher altitudes, which the bugs eventually abandon in search of other susceptible green firewood or live pine trees.

The bugs, about a quarter-inch long, made their way to lower elevations in Tucson and Marana, Lopez said. “We're trying to find a solution to get rid of them. It's a pest problem, really. We're observing the life cycle.”

Lopez, of Nogales, will collect data for about seven weeks before entering his senior year studying chemical engineering, and said the traps will continue to be checked. Once all the information is gathered, Warren will determine whether action should be taken, and if so, the best timing. That would probably occur when the bug population is lowest, Lopez noted.

Although the six-spined engraver is the only pine bark beetle evident in Tucson, researchers are watching for two others — ips lecontei (Arizona five-spined ips), which have struck ponderosas in Prescott National Forest and infested the Chihuahua pine in the Chiricahua Mountains — and orthotomecus erosis (Mediterranean pine engraver), detected in California.

It's too early to tell whether Parsons' trees are affected or will succumb to the beetles; it depends on several variables, including how well he cares for them, Lopez said. To find empty traps “is a good thing,” indicating no infestation.

Managing bark beetles in this climate is tricky; if they're flying year-round, targeting during pre- or post-flight in spring or fall isn't an option as at higher altitudes. Also, Tucson trees are unsuitable for chemical foliar sprays as they are large, on small urban sites, and have broad canopies making overspray likely and creating a hazard nearby, the cooperative extension article states.

Prevention is a better strategy, including slow, deep watering about once monthly (depending on rainfall), with a drip system or soaker hose, keeping trees healthier and less susceptible to insects and diseases.

Tree already turned yellow or red throughout the crown? Beetles may have already moved in, and it's probably a goner.