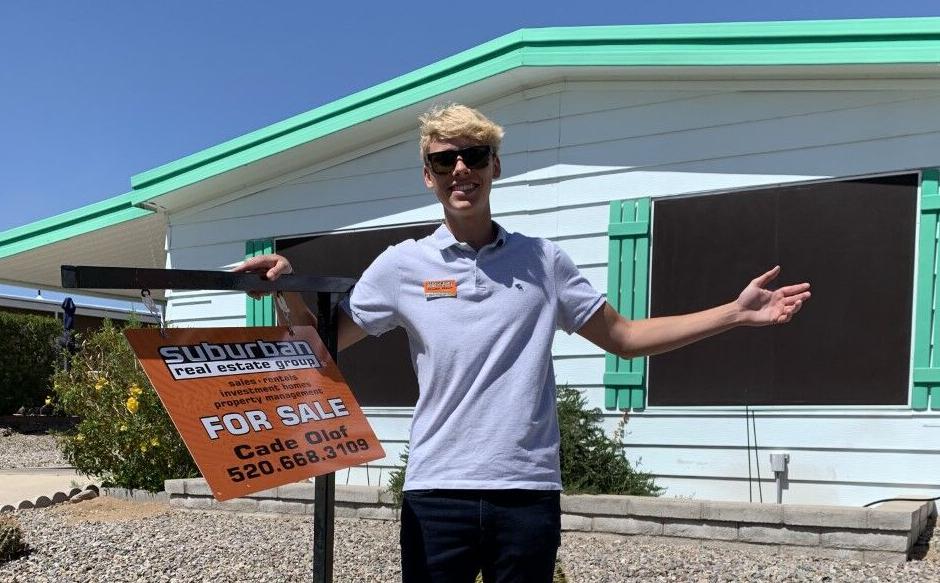 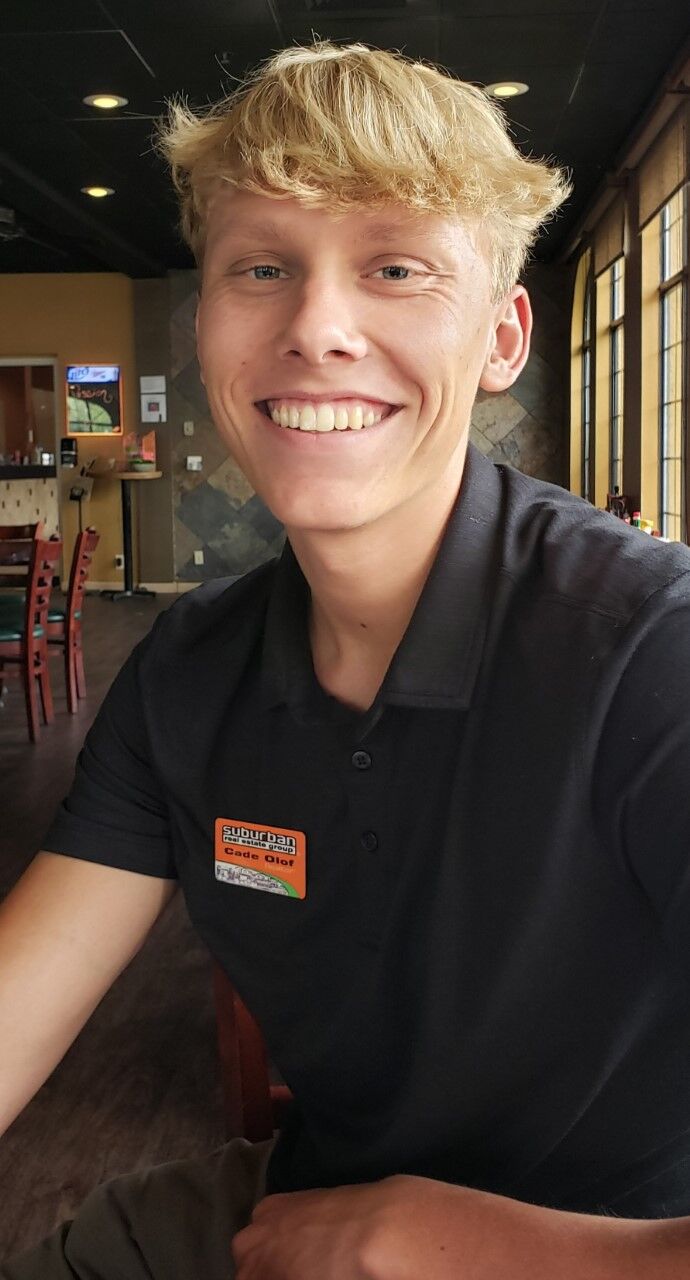 Cade Olof obtained his real estate license at 18, which catapulted him to action.

Cade Olof obtained his real estate license at 18, which catapulted him to action.

With his shock of blond hair and athletic build, he might seem more surf dude than up-and-coming entrepreneur.

Don’t let the boyish, easy-going exterior fool you — there’s a developing plan and impressive history behind the 100-watt smile, and a budding business strategy that could have 20-year-old Cade Olof of Sahuarita financially comfortable by age 30.

Descended from a family bent on overcoming challenges, Cade’s now got the baton and begun his own sprint to self-sufficiency. Several family elders have achieved it without college, and he’s discovering that may be his way, too.

His path has presented some curves so far, but he’s taking them in stride and wicked-focused on learning by doing.

Locals may know him from his football years with Sahuarita 49ers – he played till midway through high school then graduated with Walden Grove’s Class of 2019 – or church; his dad Tim Olof is a pastor at The Rock Church of Sahuarita.

Cade got his real estate license at 18. It took seven stabs; at about round four, he was ready to quit. Even mom Cristy, who’s been in real estate three years, wanted to let him quit.

“I let him be angry (then) put my foot down,” she said, knowing he was close but just not applying himself. She was right – more flash-card drills tipped the scale.

“It was such an accomplishment, he started reading books, going to mentors, asking questions,” Cristy said. “He became a learner, realizing a lot of potential but also how much he didn’t know.”

“It was my boss’s house (Cade’s day job is account manager for a company that sells products on Amazon). I handed him paperwork I myself didn’t understand,” he said. The boss knew he was green but OK with it. Together they read through, figured it out and sealed the deal.

A gregarious person from a stable environment, through which he met numerous fellow church-goers and foster siblings while growing up, Cade submerged himself in goal-setting.

Before leaving high school, he’d noticed that the entrepreneurial spirit may have embraced him as it had his forebears.

“I realized after two-and-a-half years in high school, I hadn’t even thought about what I want to do,” he said. He spent weeks poring over course catalogs from Pima Community College and the University of Arizona. Nothing tweaked his interest.

Lunching one day with a college-bound classmate speculating about getting into real estate, Cade realized he already had an uncle, John Malozsak, and mom Cristy, ahead of him in that field.

His grades were strong, he was a self-starter able to work independently and “super-organized,” he said. Ironically, the friend didn’t pursue real estate, but Cade caught a spark.

An early job as a busboy at a local bar and grill not only taught him “the customer is always right,” but that his ease around people could lead to productive conversation about future goals. He knew that large companies like Caterpillar and Amazon were settling in Tucson. He got to chatting with a successful businessman at the grill who now serves on his growing list of mentors in real estate and investing.

Malozsak, one of several in the family to see success without college, is also an influence. Hungarian in nationality but born in Romania, he immigrated to the United States as a child, following relatives who’d left communist Romania in the 1940s. He and his mother waited years for a visa but eventually made it out, then learned English.

He doesn’t believe much family had formal post-secondary education, yet all made good and several have owned businesses, he said.

“It’s about more than money, it’s what can you contribute,” he said.

Nothing against college, but he sees how it could be another step to nowhere.

“There’s this big hope that now you’re going to get hired. But what if what you learned isn’t going to apply to where you want to go?”

Faith also plays a part, Cristy said. “I believe the Lord is going to guide our steps, He knows what we’re good at.”

Malozsak’s most recent venture has taken off in the 16 years he’s been selling real estate, first with Long Realty and eventually with a broker’s license launching Suburban Real Estate Group in Sahuarita, a company that handles sales, rentals, investment properties and management services. He’s incoming president of the Green Valley Sahuarita Association of Realtors.

Malozsak says Cade’s got a lot going, but that his best attribute “is this drive; he walks his faith.”

He’s got solid checks and balances, is determined and hard-charging.

Cade has listed three residential properties and co-listed several more. He’s about to close on his first investment property near the UA, using a traditional mortgage lender and planning to rent two units to cover expenses.

Cade’s always wanted to make people laugh. As a youngster, he’d get upset if they didn’t, Cristy said. It amuses her that he still wants folks to realize life is fun, whether they’re working, playing, cleaning house or heading out on vacation

Some of his five siblings come from traumatic beginnings, she said. The family has hosted 16 foster children over six years, two of whom they adopted. Often their parents were invited to get-togethers with the Olofs.

“Out of that, he’s learned compassion for people coming out of addiction, (he) saw firsthand the pain of that,” his mom said.

Fostering can be challenging but is worth it, and he believes it’s helped Cade balance his world view.

He is third youngest of four boys; there’s also a younger sister.

And he likes people and hearing their stories; they pick up on that.

“Everyone who meets him loves him, everywhere. They invite him for dinner, make him cookies. I’ve never been invited for dinner. He’s got a confidence that is contagious,” she said.

He’s fun at home too, but disciplined, whether working out, tending to business, playing guitar or overseeing his YouTube site, where he posts videos teaching basic money management, believing there’s a lot of need out there. He also videos home tours of high-end, Tucson-market properties.

But — sorry ladies — he’s holding off on dating because he wants to have something to offer, Cristy said.

“It’s not about money but it can give you opportunities,” Cade said.

“He’s got a good mix of drive and humbleness” Malozsak said. “I think he’s looking at, pound for pound, a serious living.”

“I don’t want to be 50, look back at my life and wonder, ‘What if I had tried?’” he said. “Serving others and doing my best definitely comes from my faith and instills my drive.”

He’s an inspiration for all ages to see kids with a good head on their shoulders, Maloszak said.

“They’re still some stars out there,” he said. “The whole family tries to walk the faith. It’s very easy for younger kids to walk away from that, especially if they’re brought up in it. When you apply words from the Bible, it works. One day he’ll be running this place and have another.”