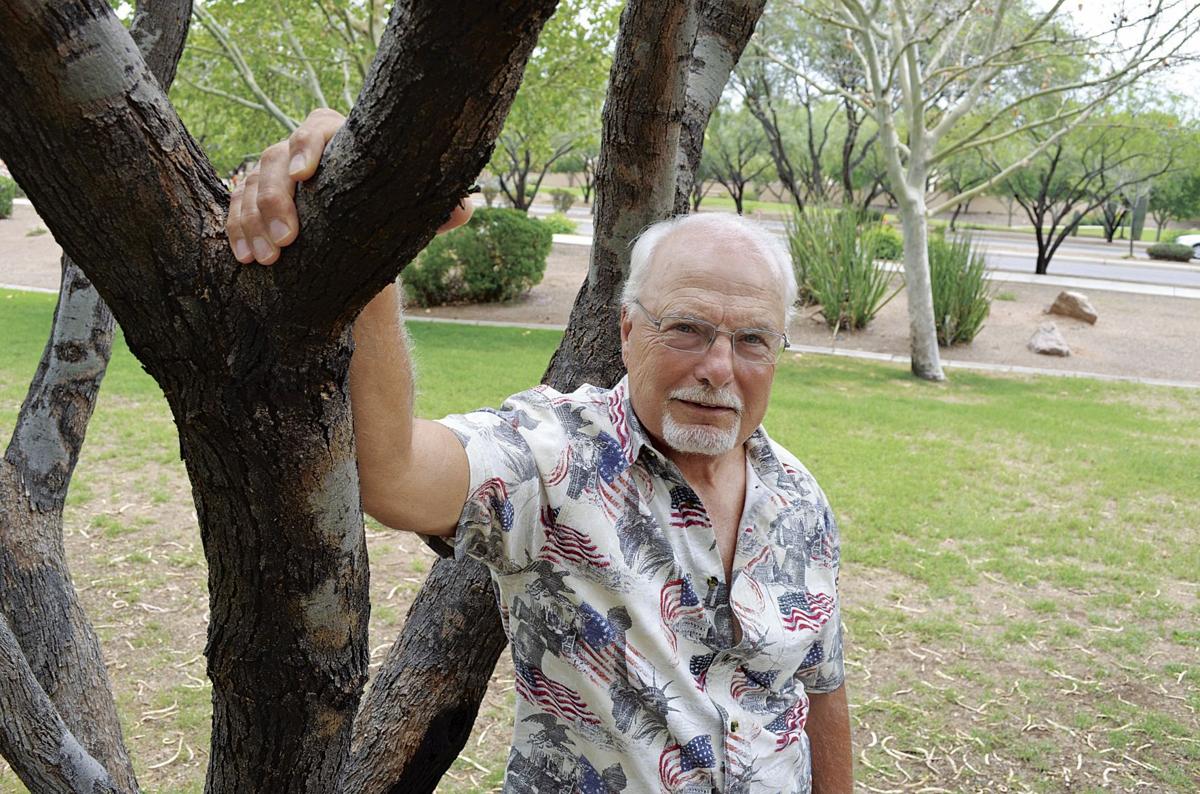 Bobby Wilson went on to a career as a lawyer after he cleared his name in his mother and sister's deaths in 1963.

A week after this photo was taken in June 1963, Bobby Wilson's mother and sister died in a fire and he found himself in jail. The photo — the only one he has as a teenager — was folded up in a friend's wallet for years.

Bobby Wilson went on to a career as a lawyer after he cleared his name in his mother and sister's deaths in 1963.

A week after this photo was taken in June 1963, Bobby Wilson's mother and sister died in a fire and he found himself in jail. The photo — the only one he has as a teenager — was folded up in a friend's wallet for years.

It sounds like a scene from a Hollywood thriller: a terrified teenager, awakened in the early morning hours to find a rifle in his face, tries to flee but ends up blasted full-body through a living room window when gasoline fumes swirling throughout his family's home ignite.

Bleeding profusely, burned and lying semi-conscious on the grass, the boy slowly opens his eyes to the violent conflagration of his family's ramshackle Oklahoma homestead. Inside, his deranged mother — who'd just tried to kill him — and his younger sister die in the blaze.

The tragedy doesn't end there: The youngster is hastily accused of murdering his family, jailed, denied counsel and initially held without bond by an ambitious local prosecutor intent on inflating his own reputation with a quick conviction.

This is no horror movie, it's just one event among many violent others in the real-life adolescence of Sahuarita attorney Robert "Bobby" Wilson, who describes every shocking detail of his early years in his memoir, "Bobby's Trials."

For years, Wilson says, he remembered almost nothing about that night. It was only after a 10-year struggle to clear his name, when he had begun to practice law, that long-buried memories surfaced, allowing him to deal openly with his childhood trauma.

"The full details didn't become conscious until I was investigating the case of one of my first law clients, who also had been falsely accused of murder," remembers Wilson. "She, like me, had no money or resources to defend herself against the heavily biased legal machine."

Wilson was looking for clues in the vehicle the woman was driving the night her boyfriend was fatally shot. He smelled something unmistakably familiar — the scent of gasoline mixed with blood. It sent him staggering.

"The horrible, nauseating smells off the car plummeted me back like a lightning bolt to that fateful night in my childhood, and all the memories flooded in,” Wilson says. “It was an incredibly disturbing experience, but it also brought relief: now I had the truth."

One of the main obstacles to gaining his freedom was the false accounts of his story written by what he describes as a sensationalist small-town newspaper editor.

"It was an unsolved murder mystery that only I could solve," Wilson told Phoenix's PR Web the year his book came out. "The case was widely covered by the Oklahoma print media in 1963, but the actual events remained unknown until … (the book was written)."

With time, Wilson's trauma-induced amnesia abated, and he was able to fully account for the violent event that changed his life forever. Fifty-four years later, he is still able to recall every detail.

"That night, as I scrambled to get under my bed to protect myself from my mother, she fired seven shots, and a couple of the bullets ricocheted and shattered some glass bottles we had gasoline stored in, and gasoline spilled all over the place," Wilson remembers. "I knew for certain the next shot was for me — I had to do something."

Wilson frantically felt around under his bed and found a single-shot .22 rifle he kept there to deal with varmints. He clumsily shouldered the gun and fired one shot in self-defense, hitting his mother.

"Then I ran into the living room to look for the phone and call an ambulance," Wilson says. "But when I turned on the living room light, the light switch shorted and made a spark, and what with the fumes and gasoline, everything blew all to hell. I was blasted out the living room window, along with the rifle."

Wilson quickly found himself under suspicion by what he calls a corrupt county sheriff and his cohorts and was finally jailed without due process, struggling to find an ally to help clear his name. His dream of joining the Army — he'd enlisted after high school and already had orders — vanished after he was accused of the murders. A jury deadlocked in 1965, and he was summarily charged with felony arson and acquitted in 1965.

Wilson continued to pursue justice, and in 1973 finally saw all charges against him dropped after the sheriff recanted his original testimony.

A harsh beginning, but the caliber of Wilson's accomplishments seems almost incongruous compared to his early years.

Robert John Wilson, 72, was born in San Francisco, and as a child moved repeatedly with his sister and mother, settling in Hugo, Oklahoma, in 1953.

After his acquittal in 1965, he earned a bachelor's degree in political science from the University of Texas-Arlington in 1968, and graduated from Texas Tech University Law School in 1973. He practiced law in Burleson, Texas, from 1974-94, and moved to Phoenix in 1995 to teach law courses in the Maricopa County Community College District, where he now is head of paralegal instruction.

Talk to him for very long and you discover that what appear to be opposites blend intriguingly in Bobby Wilson's character:

Throughout his childhood, he was acutely afraid of his abusive mother, and even feared for his life. Yet as an adult in his profession, he gained a reputation as a lawyer who was quick to challenge his opposing counsel — and even judges — with audacity. As a young man in the '60s, he protested the Vietnam War and worked in "dove" candidate George McGovern's campaign, yet passionately wanted to serve in the military.

He now hews to a conservative political stance and supports President Trump; but Wilson hastens to say he "admired" and "genuinely liked" former Texas governor Ann Richards, known for her rough-and-tumble progressive stamp. He's proud of his many achievements, but easily discloses his former background as an all-around handyman, fishing worm vendor, butcher apprentice, butcher shop manager and other working-class occupations. He strongly supports the country's control of its borders, yet was once sympathetic toward border-crossers who, he says, "only had the misfortune of being victims of ICE raids on local businesses."

At the beginning of his legal career, when he established a law practice in little Burleson, Texas, outside Fort Worth, the young Wilson found himself in the middle of a marriage case gone uproariously bad.

"Every cop on the beat dreads going to domestic disputes," Wilson reflects. "Same thing with lawyers." What started out as a simple divorce case ended up as a rollicking Wild West spectacle.

"There was this woman who wanted to divorce her husband, and he didn't like it one bit," Wilson says with a laugh. "'Course, she picked me for her lawyer."

This was small-town Texas justice, however, where things can get complicated very fast.

"The night before court, this guy called me at home and said, 'I'm going to shoot my wife and you both in court tomorrow,'" Wilson remembers. "That was not anything I wanted to hear in the middle of the night."

Time to call out the troops.

"I was a little bit nervous at that point, so I went over to the Sheriff that morning and told him, 'You better get some deputies over there today because this guy means business.'" Wilson's worst fears were realized the moment he entered the courthouse.

"When we came in, the husband had already gotten there, and my client — the wife — leaned over and whispered something to me I'll never forget," Wilson recalls. "The wife looked straight at me and said, 'He told me he was going to kill me — and that he's gonna kill your (expletive), too!'"

Wilson swung around in his chair and saw that the woman's husband was now sitting directly behind him.

"At one point he and I looked right at each other and locked eyes, and I just knew instinctively, 'That guy's got a gun,'" Wilson remembers.

There followed a scene straight out of Judge Roy Bean: Chickening out, the husband ran from the courtroom and dashed into the street, closely followed by the deputies. After hours of searching, he was apprehended, charged and jailed after officers found guns and boxes of ammunition in his car parked near the courthouse. And, yes, the divorce went through.

Having made his mark in Texas law, and getting older, Wilson again felt the need for a basic change and decided Arizona was it, after hearing that the community college district needed an instructor for one of its law programs. He began teaching there in 1995, and launched a private investigation firm at the same time.

"I didn't take the Arizona bar," he says. "I'd already done the law thing in spades, and I just wanted to move straight into something else completely different."

Now firmly ensconced in Arizona, he's interested in running for office; and, true to his intrepid young lawyer days, he is not soft-spoken about it — calling the shots, and his opponents, like he sees them.

"I am looking at the local state House seat, the one currently occupied by a fool," Wilson quips, concealing a deadly seriousness about his political goals.

"Education right now is terrible," he says. "I want all of our students graduating from Arizona high schools to be well-trained in a good vocation when they get out," Wilson says. "If I was elected, fixing that would be a major goal. But I'm not going to sugarcoat anything."

Indeed not. He can probably be counted on to speak his mind as an office-holder as surely as he did in his crusading lawyer days, and in his 2010 memoir: "This is a true story; the actual names, dates, and places are used. If anyone described herein is embarrassed, that is just too bad."

Robert "Bobby" Wilson is the author of four books: “Bobby's Trials,” recounting his life as an abused child who is ultimately accused of murder (2010); “State of Unrest,” an imaginary tale of a new Civil War in America (2010); “State of Mind,” speculating on a renewed American mortgage crisis (2012); and “The Killing of Timothy McVeigh: the Hidden Al-Qaeda Attack on Oklahoma City” (2016), all published by Apache Publishing Company.