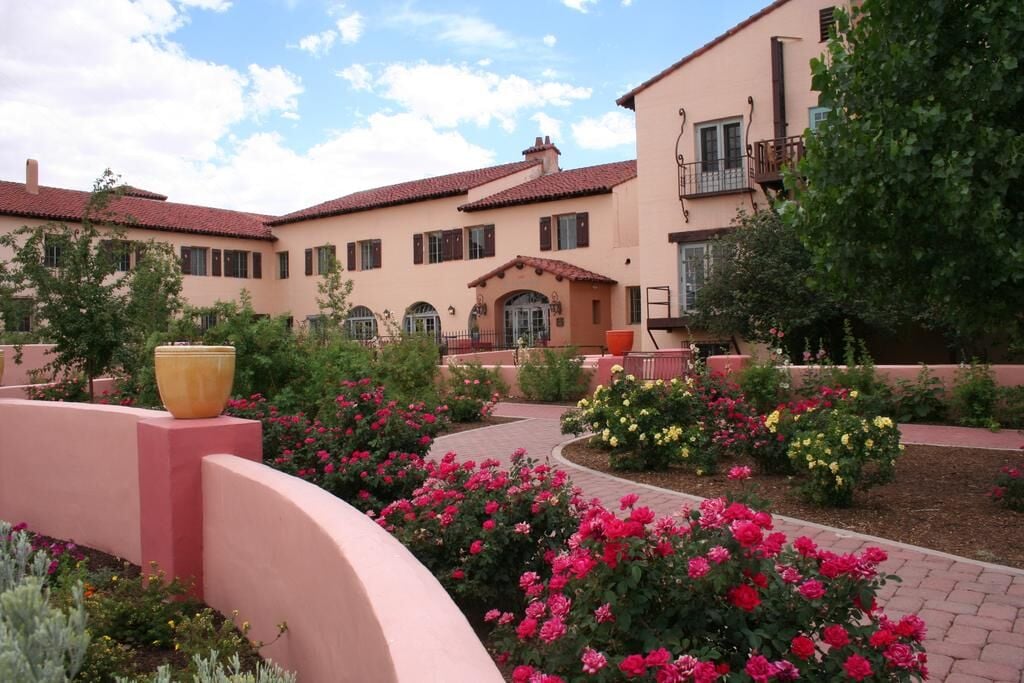 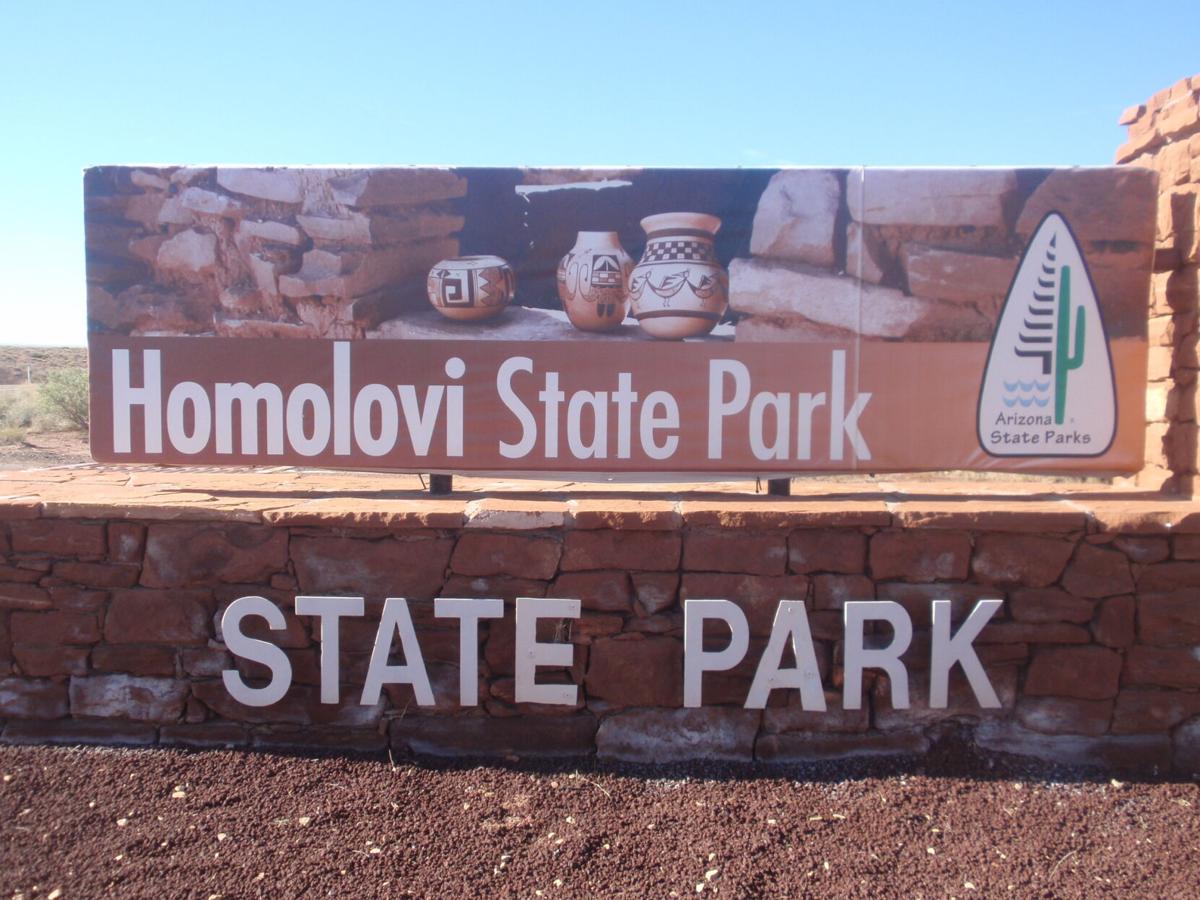 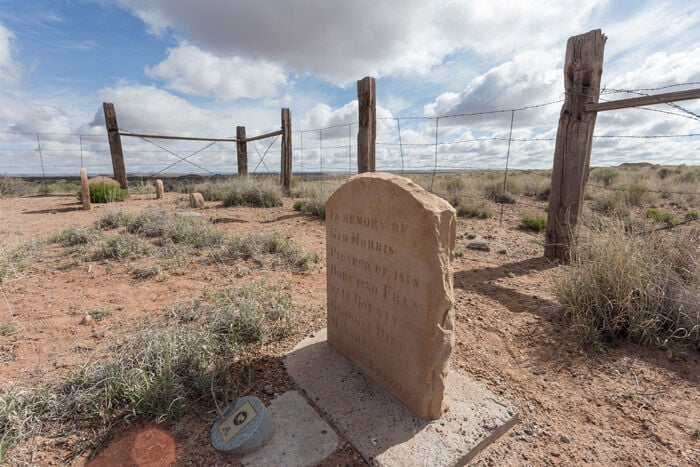 This marker commemorates the historic Sunset site, a Mormon Pioneer settlement founding in 1876 but abandoned in 1887. 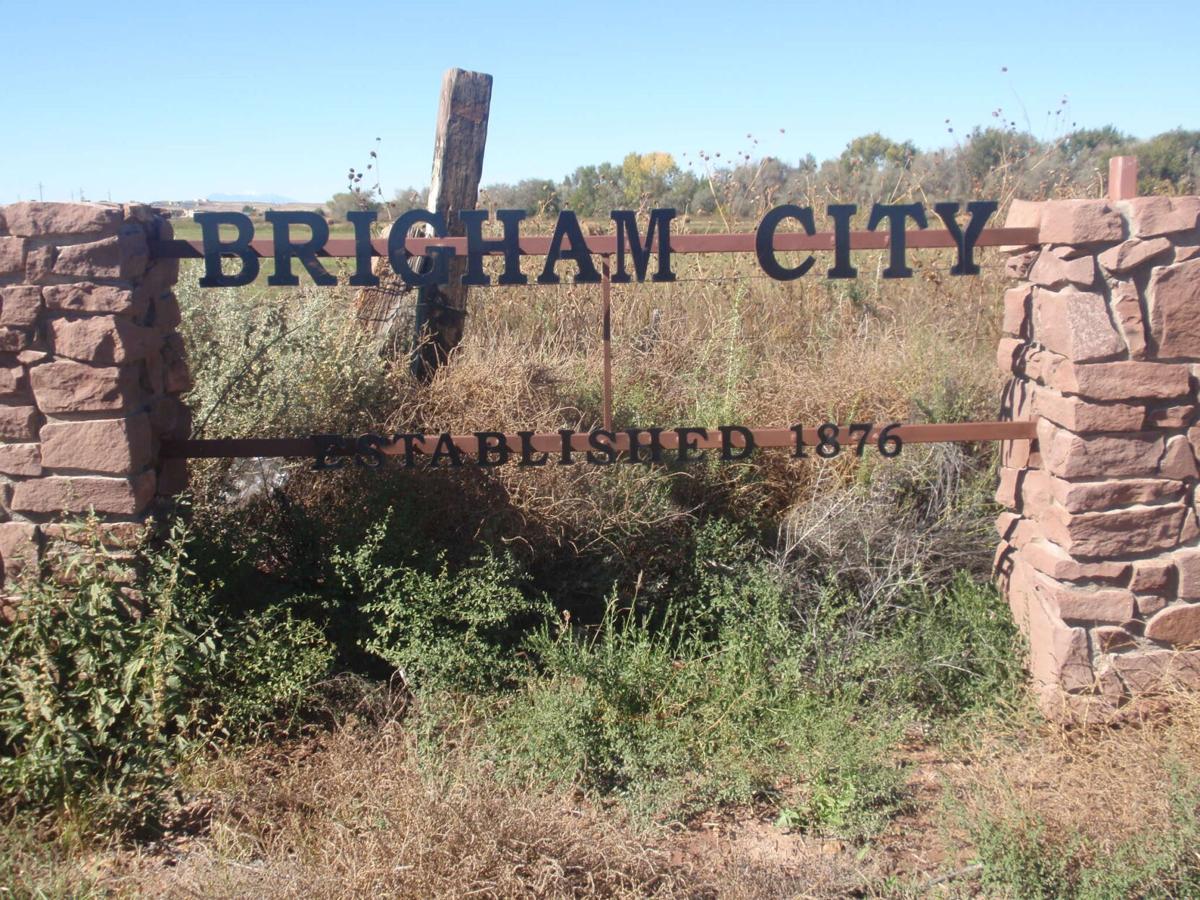 Now listed as an Arizona ghost town, Brigham City was originally a Mormon settlement founded in 1876 and abandoned in 1881. 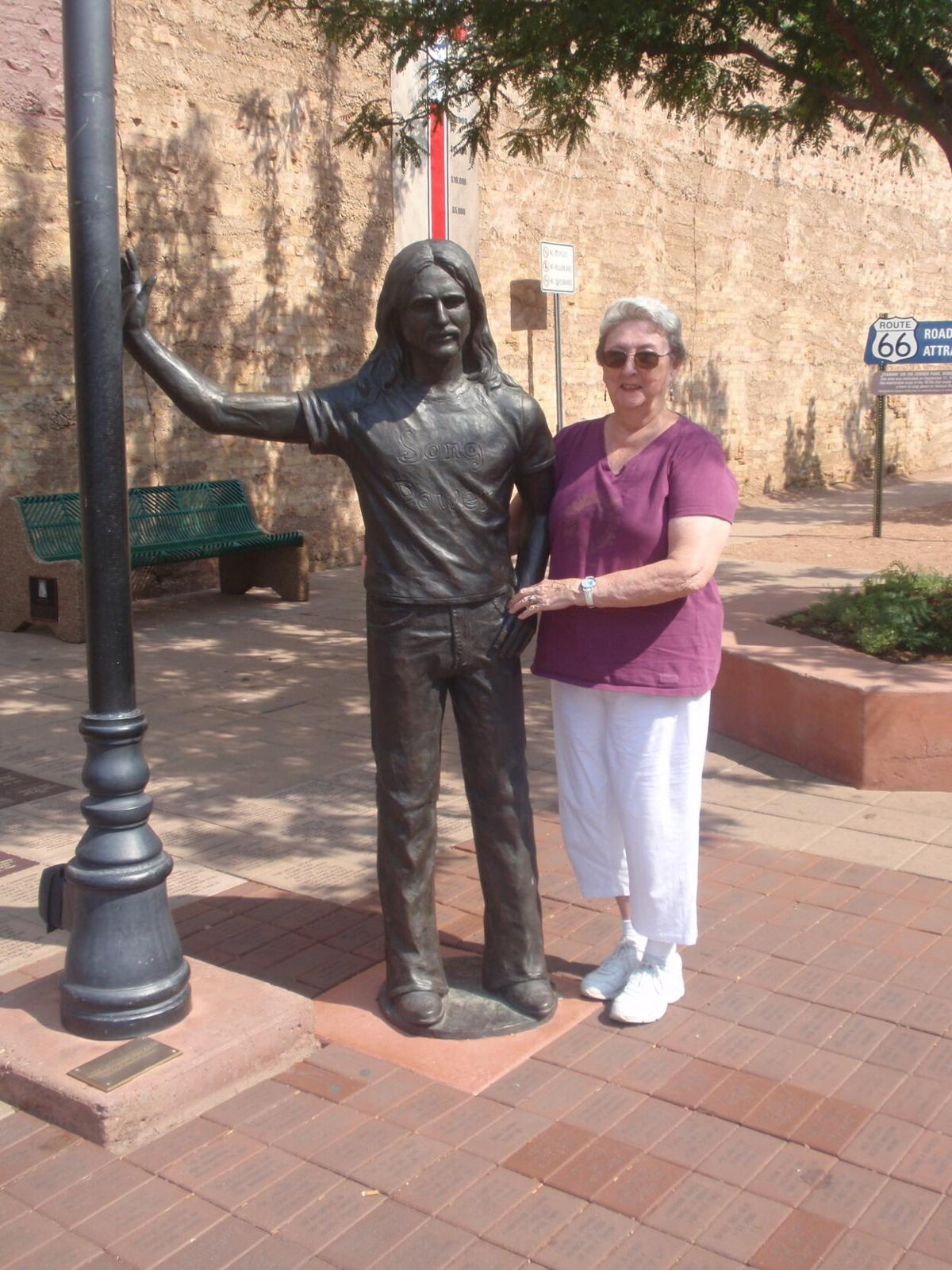 Midge Lemay standing on the corner in Winslow with the Glenn Frey statue. 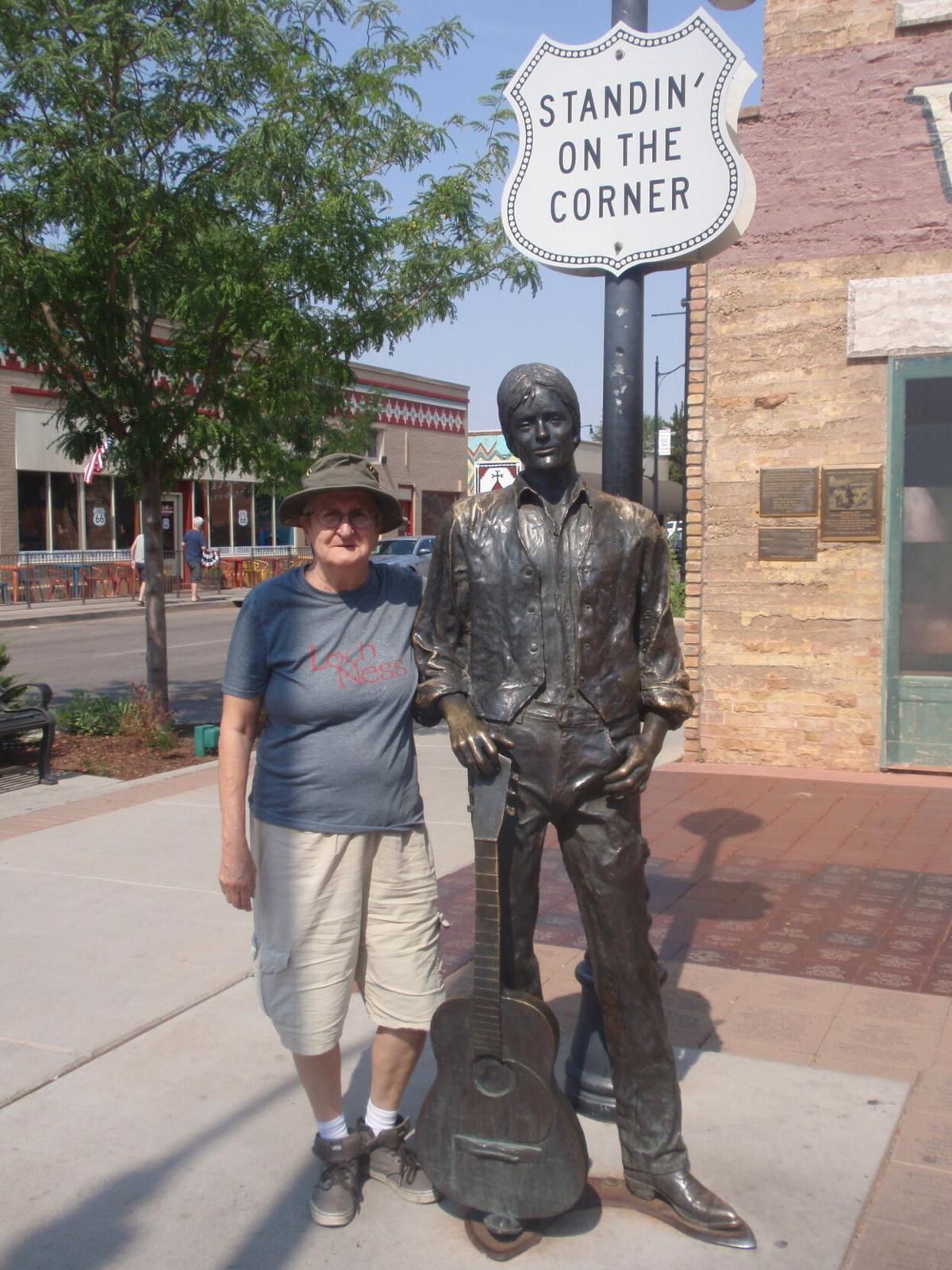 Sue Poirier shares a corner in Winslow with the Jackson Browne statue.

We are frequently asked about our favorite place in Arizona. We have seen hundreds of sites in our beloved state that have inspired, amazed, surprised, and amused us. It is difficult to pick one as our favorite, so we usually answer the question by sharing with others a list of the places that we would describe as our “favorites.” Among those, we would definitely include Winslow, Arizona. We have frequented this area on several occasions and have many funny stories and fond memories.

Winslow, 57 miles southeast of Flagstaff, lies along Interstate 40. This city, of approximately 10,000 residents, achieved national and worldwide fame in 1972 when it was included in the Eagles/Jackson Browne song “Take it Easy.” Today, millions have heard or sung the line “Standing on the Corner in Winslow Arizona!”

Prior to its current fame, this town was created during the Railroad Era of the 1880s. Named in honor of railroad executive Edward Winslow, this town became a Santa Fe Railroad Terminal in 1881 and Winslow was founded in 1882. Today, there is evidence of the railroad’s past and visitors can easily locate some of the sites: near the corner of Second and Kinsley Street, there is the Railroad Underpass, built in 1925 and listed on the National Register of Historic Places. The prior offices of the Santa Fe Railroad can be viewed adjacent to the La Posada Hotel, and most current visitors will have the opportunity to see a train rolling through town.

Through the years, we have explored some interesting historical sites in the surrounding area including Brigham City, Homolovi State Park and Sunset.

Brigham City, listed as an Arizona ghost town, is one mile north of Winslow and was originally a Mormon settlement founded in 1876 by families from Salt Lake City. The town, formerly known as Ballanger’s Camp, was abandoned in 1881 due to a lack of water needed for agriculture. At this settlement, all of the homes were built inside a protective wall.

During our visit in 2015, we were surprised by the amount of remains at this abandoned site. A large section of the perimeter wall still stands and gave the settlement an air of elegance, mystery and intrigue as we walked toward the entrance. We found some semi-intact adobe structures, foundations, portions of smaller walls, and one intact stone building. This site, listed on the National Register of Historic Places, is one of four Mormon settlements that were established in this area along the Little Colorado River.

Homolovi State Park, five miles northeast of Winslow, was opened in 1993 to preserve archaeological sites that were being devastated by looters and souvenir seekers. The park protects seven separate pueblo ruins built by different cultures over a span of years. The Hopi tribe consider this to be an ancestral site and often return for ceremonial purposes. Of the seven ruins, only two are currently open to the public.

Homolovi I, listed on the National Register of Historic Places, is near the river, about two miles from the visitor center. This site is believed to have been occupied from A.D. 1250 to 1400 by farmers, artisans and traders. People living in the 250-room pueblo are believed to be the ancestors of the modern Hopi tribes.

A steep, uneven, gravel path allows visitors to meander through the remains of the pueblo. We found a section of an exposed wall and multiple piles of rocks indicating the location of several structures. This site is located on high ground, overlooking the river. An excellent location for an agricultural community.

Homolovi II, also listed on the National Register of Historic Places, is the largest of the protected sites. It is believed that the Anasazi inhabited the area between A.D. 1330 to 1440. The pueblo contained about 1,200 rooms, three plazas and several kivas. We meandered through the site on a paved walkway and located some exposed walls, hundreds of pottery shards, the remains of a kiva and the footprints of many other rooms. We strolled through the entire site taking pictures of the surrounding area, the ruins, the pottery shards and the kivas.

Sunset, listed as an Arizona Ghost Town, lies within the boundaries of the Homolovi State Park. In 1876, this settlement on the banks of the Little Colorado River was settled by Lot Smith under the name of Sunset Fort. It’s one of the four settlements along the river that was founded by the Salt Lake City settlers. The site was abandoned in the 1887 due to crop failure and flooding. Today, there are very few remains: one bridge pier and a small cemetery that sits atop a hill. A well-maintained dirt path near the Visitor Center leads visitors to the cemetery to view the remaining headstones.

Within the city limits, the Winslow Commercial Historic District, listed on the National Register of Historic Places, is on the Original Route 66 and attracts tourists from all parts of the country and the world. The energy in this district brings you back in time with the Route 66 sign painted on the road, the vintage cars and trucks, the Route 66 eateries and the two metal sculptures that are standing on the corner. One of the sculptures was installed in the 1990s and resembles Jackson Browne. A new sculpture of Glenn Frey was added in 2016. It is endearing to watch people hugging the sculptures, getting their pictures taken on the world-famous corner and singing to the top of their lungs.

Every time we visit this site, we feel the magic and energy in the air. We love talking with the visitors and taking pictures of excited tourists from many states and several countries. We even understand the request of some visitors who point to the camera, hand us the camera, hug the sculpture and smile. We have always been willing to take pictures of the happy, smiling faces.

Yes, we have hugged both of the sculptures, had our pictures taken with the Route 66 sign, the mural, the antique truck, and we have sung the famous line very softly, for fear of offending others and disrupting the magic atmosphere. We have met many very interesting people on this corner including a middle-age couple who came to Winslow in memory of his grandfather who had worked for the Santa Fe Railroad. During our conversation, we suggested some of the local sites he might be interested in exploring. This is a great place to absorb some of the history and fame of the railroad town and to meet people from around the world.

For those who love Arizona oddities, there is an interesting one near the corner of Second and Kingsley streets. On the top of a building, we located a cowboy in a bathtub, taking a bath with his boots and hat on.

Our next stop is La Posada Hotel, listed on the National Register of Historic Places, designed in the 1920s by the well-known architect Mary Jane Colter. This hotel is referred to as Fred Harvey’s “Last Great Railroad Hotel” and is also noted as Mary Jane Colter’s Southwestern Masterpiece. The hotel opened in 1930 and provided excellent service to train travelers and tourists through the Depression and beyond. Some of the celebrities that frequented this hotel include Albert Einstein, Amelia Earhart, Franklin Delano Roosevelt, John Wayne, Charles Lindbergh, and many more.

In 1957, the decrease in train tourism forced the hotel to close its doors and the hotel stood empty for many years. In 1997, it was purchased by new owners who have transformed this forgotten legend into a magical place. Today it stands as a reminder of the era of railroad travel. This huge Mission, Revival-style hotel with is red terracotta roofs and window shutters, exudes luxury.

On our first visit, we were impressed with the magnificent structure and its various outdoor sitting areas, fountains, multiple gardens, rocking chairs by the railroad tracks, sculptures and private courtyards. Inside, the décor brings you back in time to the 1930s and ‘40s with its various sitting areas, decorative art, lighting and exquisite woodwork.

We have stayed at the hotel on several occasions and we always feel like royalty. We enjoy the exceptional service, the relaxing atmosphere and the attention to every detail. In the dining room, we always request to sit by the front windows so we can watch the trains. We enjoy the sound of the whistle and the vibration of the trains rolling by.

On our very first visit, a park ranger we had met earlier suggested that we try the chocolate souffle for dessert. OK. We did order the souffle and, today, we still remember the memorable event — the tiny, brown cake transported to our table by a smiling waitress, filled with cream and drizzled with warm chocolate sauce. We do not remember all of the details, but we surely remember that the cake disappeared in 30 seconds or less.

We will return to the La Posada Hotel and we have recommended it to many of our friends. On the front door, there is a sign that reads: “Enter in Silence — Depart in Peace.” Apropos!

Winslow: a place to relive the Glory Days of the Railroad Era, visit prehistoric dwellings and sing the famous line “Standing on the Corner in Winslow Arizona!”

Travels with Two Sisters is a series of adventures in Arizona with Green Valley residents Marie “Midge” Lemay and Suzanne “Sue” Poirier. For more discoveries, check out their first three books: “One Mile at a Time,” “A Gypsy in Our Souls,” and “Connecting Dots.”