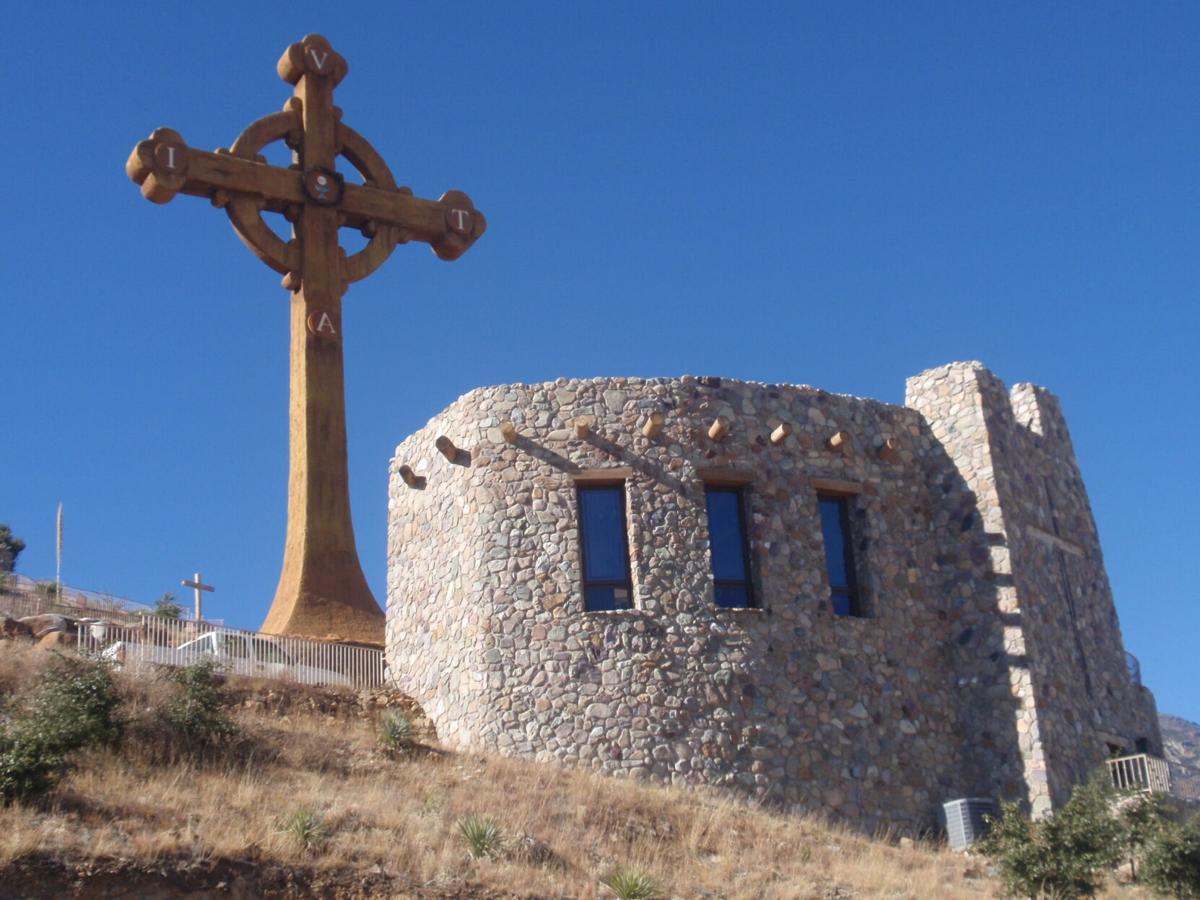 The Shrine of Our Lady of the Sierras includes a 75-foot Celtic Cross on a hillside and the stone chapel. 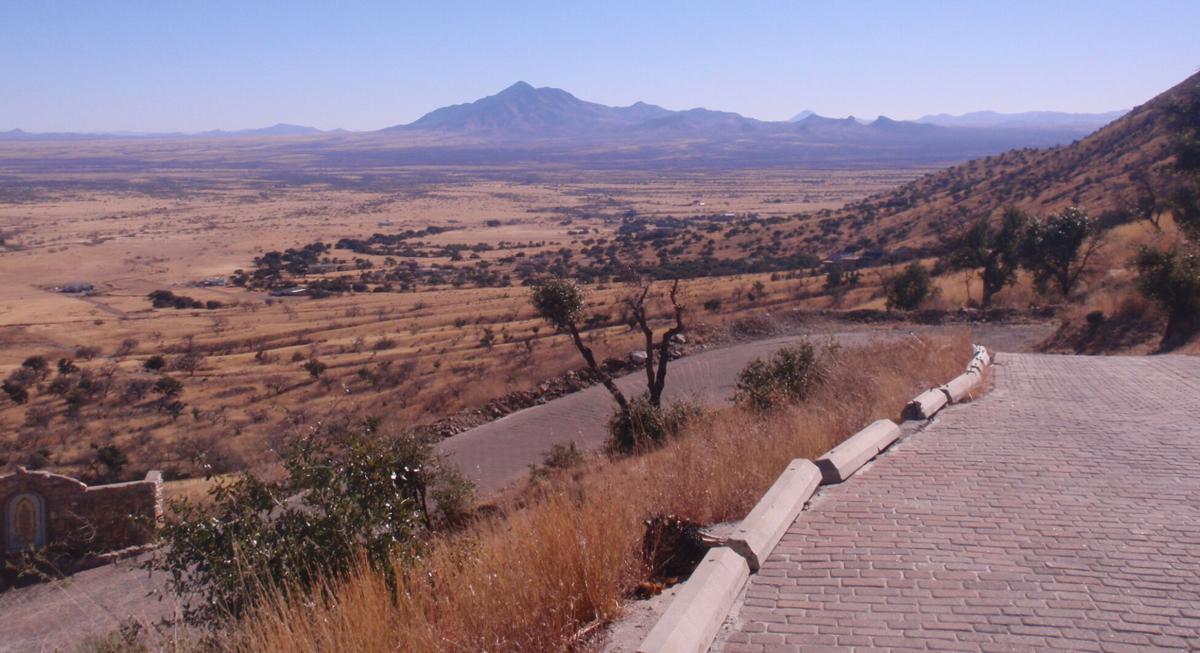 A bird's-eye view of the valley from the ascent to the Shrine of Our Lady of the Sierras. 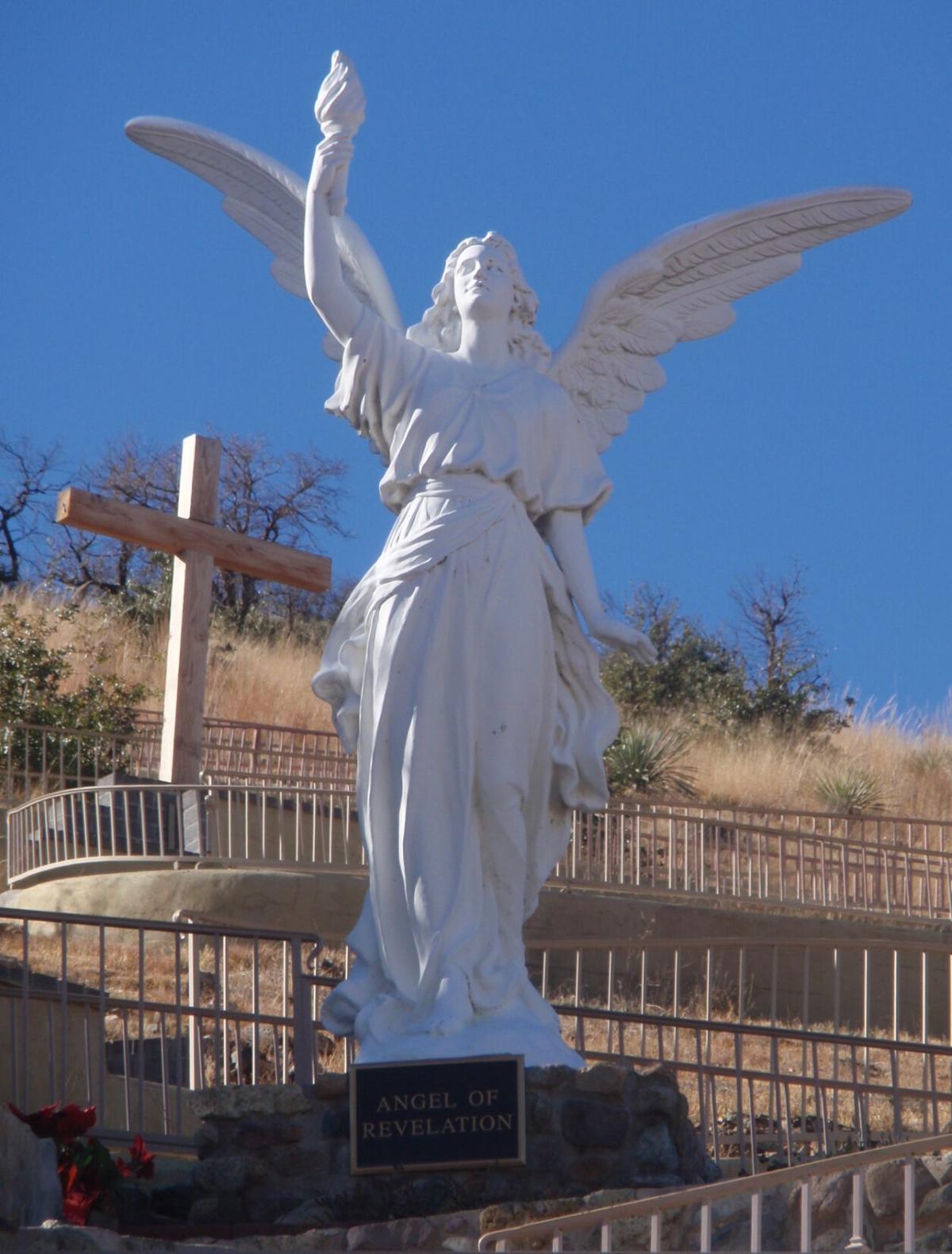 A 10-foot high “Angel of Revelation” at the Shrine of Our Lady of the Sierras. 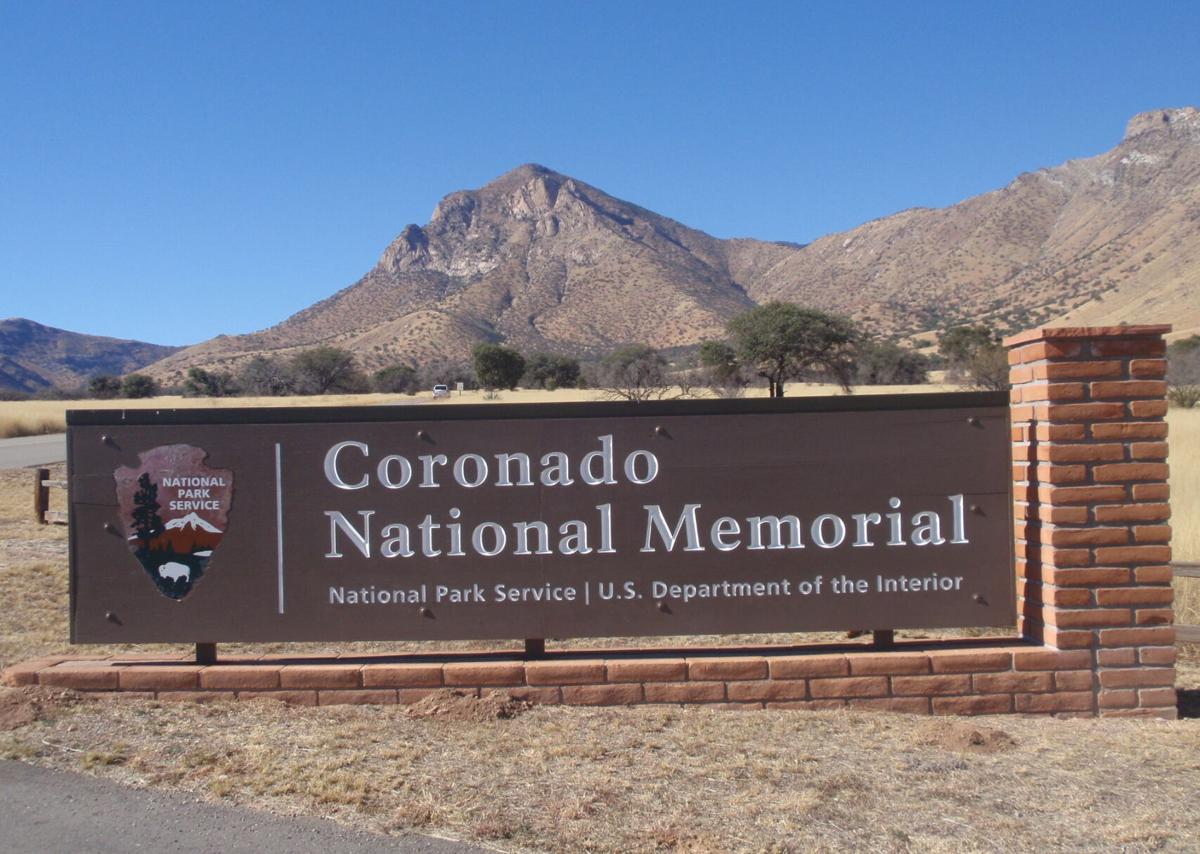 The Coronado National Memorial is also listed on the National Register of Historic Places. 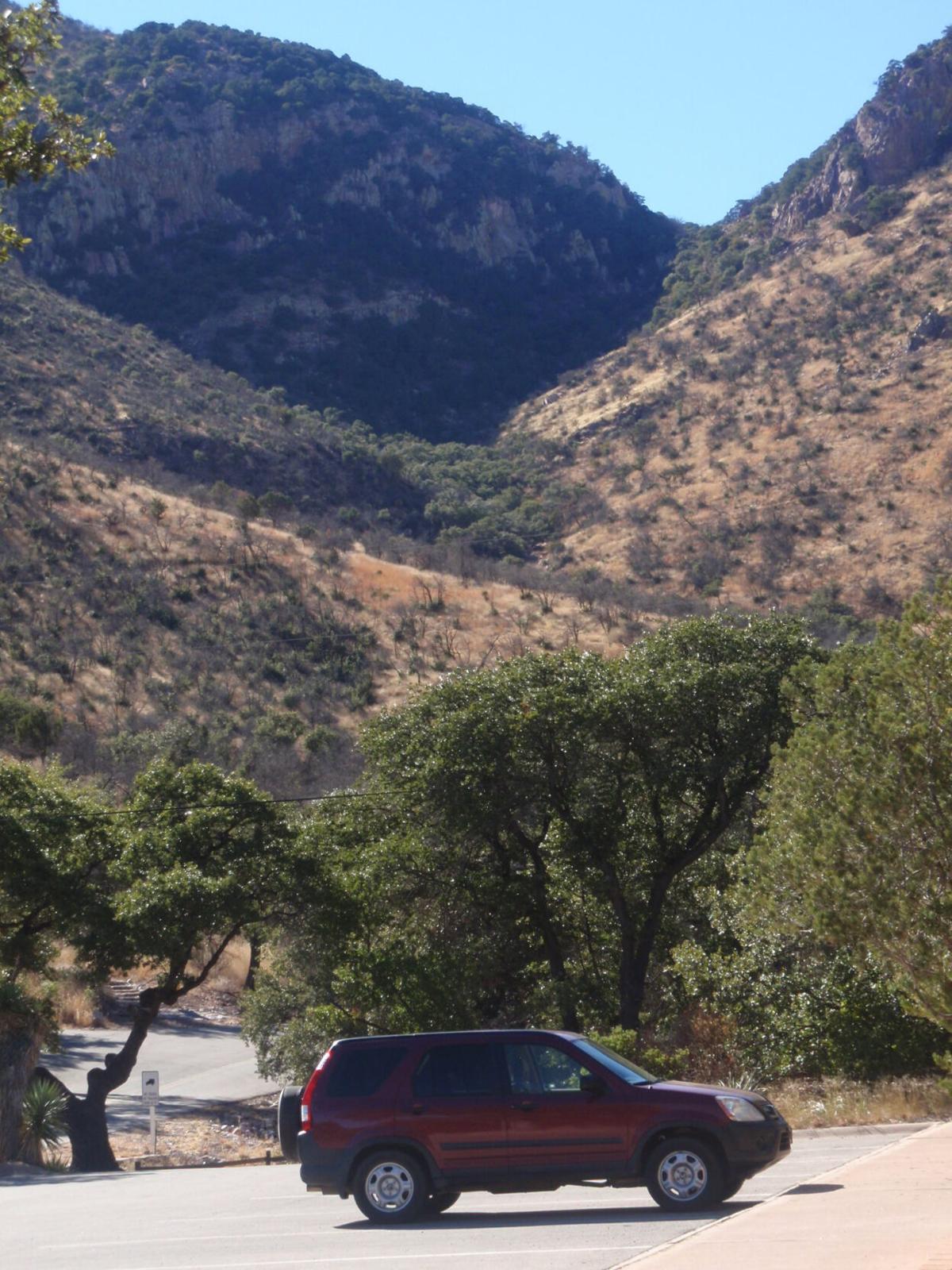 Gypsy, the two sisters' trusty Honda, is pictured in the Coronado National Memorial. 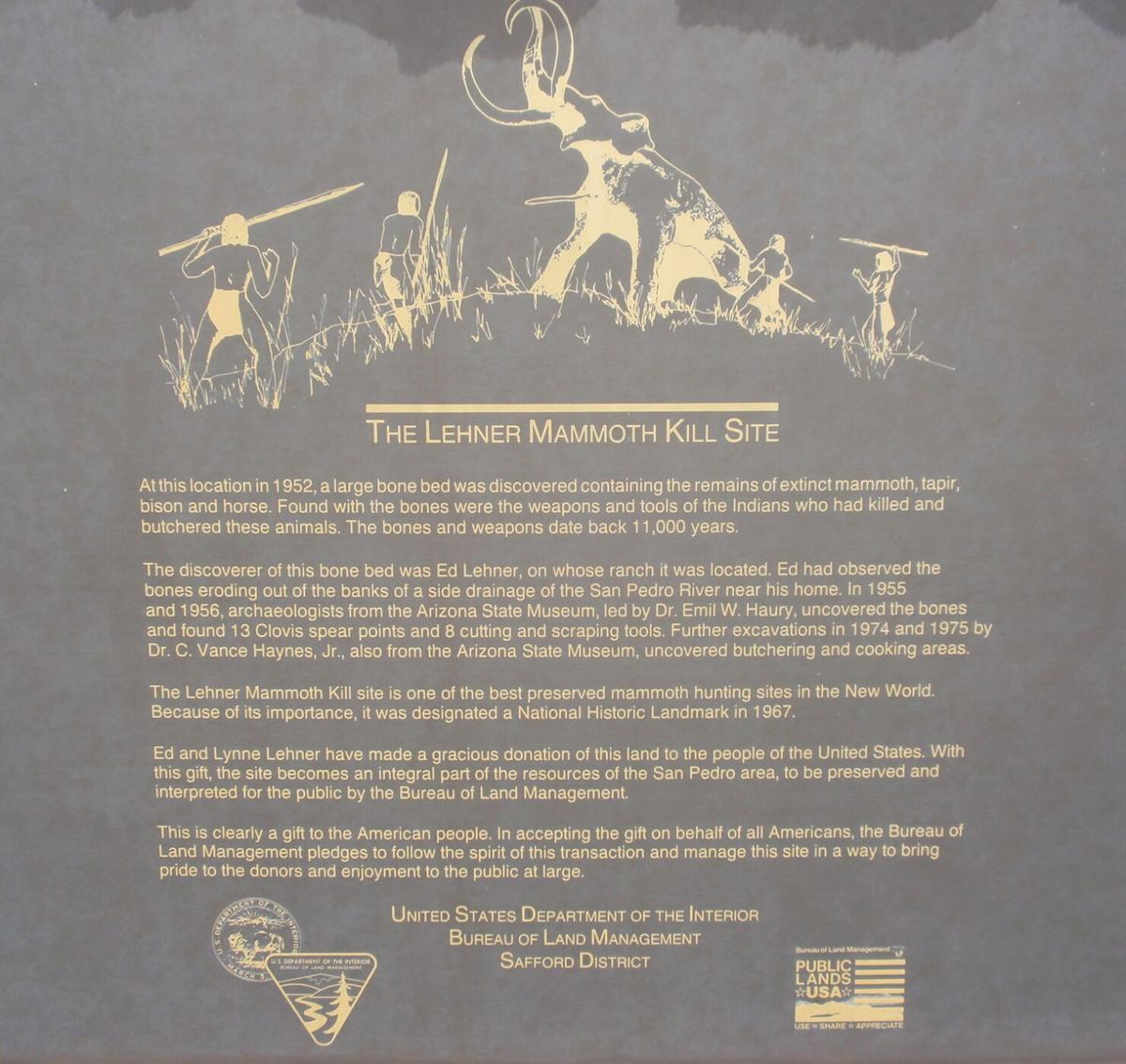 In 1952, Ed Lehner discovered a Mammoth Kill Site that is now listed on the National Register of Historic Places.

Planning a new adventure is always an exciting and fun time. We drag out our oversized shoe box filled with information on numerous sites we want to explore and start the decision-making process.

A box? What happened to the “list of places to see?” We graduated to a new organizational system that eliminated the need of revising and rewriting lists. We rummage through the papers, choose our sites and plot our course.

For this adventure, we chose three interesting and diverse sites in the San Pedro Valley. We love exploring this part of the state and we particularly love to stop at our favorite pit stop. Mustang Corner, at the intersection of Route 82 and Route 90, got its name due to the herds of wild mustangs that used to run wild in the area. Today, the wild mustangs are gone. On the corner is an abandoned gas station — and a gas station/convenience store on the other corner. We have come to rely on this corner for gas, restrooms, and snacks during our explorations in San Pedro Valley. Great place to rest, laugh, stretch, and enjoy the company of fellow Arizonans.

Oh! By the way, the new owners have installed a beautiful sculpture of a Mustang in honor of the wild animals who once roamed in this section of the state.

From Mustang corner, we headed south on Route 90 to the community of Hereford, southeast of Sierra Vista. Founded in 1878, it is a former railroad town and was home to the Hereford Army Airfield, a World War II training field for bombing pilots. Today, there are a few remains of the original town site and bombing field: a few concrete foundations, a railroad bed, and traces of a runway tarmac.

This community is currently well-known for its natural beauty, its bird watching opportunities and for three very interesting sites.

Our first stop was the Lehner Mammoth Kill Site on East Lehner Road. Listed on the National Register of Historic Places, this is only one of Arizona’s Mammoth Kill sites. In 1952, Ed Lehner discovered some mammoth bone fragments on his ranch. After notifying the Arizona State Museum in Tucson, excavations on site occurred in 1955-1956 and 1974-1975. The excavations produced bones fragments from a horse, tapir, several bison, camel, bear, and 12 immature mammoths. Butchering tools, Clovis projectile points and fire hearths were also unearthed. In 1988, the site was donated to the Bureau of Land Management.

We arrived at the small parking lot and walked to the brick monument which stands near a large field. The monument contains an information panel detailing the discovery of the mammoth bones and other specimens found at this location. The plaque states: “The bones and weapons date back 11,000 years.”

We could see the field where the excavations occurred, but visitors are not granted access to the site. Nevertheless, we were honored to have had the opportunity to stand where human beings walked and killed mammoths thousands of years ago.

We returned to Route 92 and began looking for the site of our next adventure. The Shrine of Our Lady of the Sierras was not difficult to find. We quickly spotted the 75-foot Celtic Cross on a hillside. We drove to the parking lot and climbed up the hillside to the stone chapel. Once at the top, we discovered that there was an upper parking lot for those who have difficulty climbing.

The small, reverent chapel is a unique and inviting space. Completed in 1998, the river stone building contains aspen beams framing an ocotillo rib ceiling, exquisite murals, an antique Spanish crucifix, religious statuary and several windows that highlight the beauty of the surrounding area. This is a place of reverence, peace and tranquility.

On the grounds, we located the 14 outdoor stations of the cross, a 31-foot statue of the Blessed Virgin Mary, a 10-foot high “Angel of Revelation,” a waterfall, a grotto and several other distinctive crosses and statuary.

At the base of the shrine, there is another building named “Mary’s Knoll” that offers information about the shrine, its history, the renovations after the fire in 2011, and current events. It also offers visitors of all denominations a place of prayer and serenity. This is a place worthy of exploration: the interior contains several unique religious murals.

We were now looking forward to our third, and last, stop of the day. Heading south on Route 92, we arrived at the entrance of the Coronado National Memorial. We were eager to explore this site that is listed on the National Register of Historic Places, but hunger was a priority. We decided to have our picnic lunch near the entrance sign, across the dirt road from the huge fields of golden grasses. What a beautiful place to have our lunch!

We were well fed, eager and excited when we entered the park that commemorates the 1540 expedition by Francisco Vasquez de Coronado that crossed the desert landscape in the current state of Arizona. This expedition has been described by historians as “one of the greatest land expeditions the world has known.” At the National Park Visitor Center, we acquired our park map, viewed all of the artifacts and gathered information about the route, Coronado and the goal of the expedition.

Leaving the center, we drove up the winding and narrow dirt road, with no guardrails, that leads to the mountain top. On the way up, we had to stop several times to take pictures of the San Pedro Valley, the rolling hills, the desert foliage, the rocks, the golden grasses and so forth.

Finally, we reached our goal: Montezuma Pass. Here we were standing at the overlook where the expedition entered modern Arizona! Information panels at the overlook are abundant, and on one board there is a picture of an expedition going through the valley.

We looked at the picture, then the valley — it was easy to see the expedition crossing this magnificent landscape. Closing our eyes, we could almost hear the sounds of the expedition heading across the San Pedro Valley: the sound of the wagon wheels, the bleating of sheep, the bellowing of cattle, the horses breathing, the clinking of metal armor and the distant voices of numerous people.

On the way down the mountainside, we stopped on several occasions to take more pictures of the spectacular scenery, the incredible rock formations, the golden grasses and the bright blue sky. This is a park full of beauty and history, and we rate this site as one of our favorite places.

Travels with Two Sisters is a series of adventures in Arizona with Green Valley residents Marie “Midge” Lemay and Suzanne “Sue” Poirier. For more discoveries, check out their first three books: “One Mile at a Time,” “A Gypsy in Our Souls,” and “Connecting Dots.”