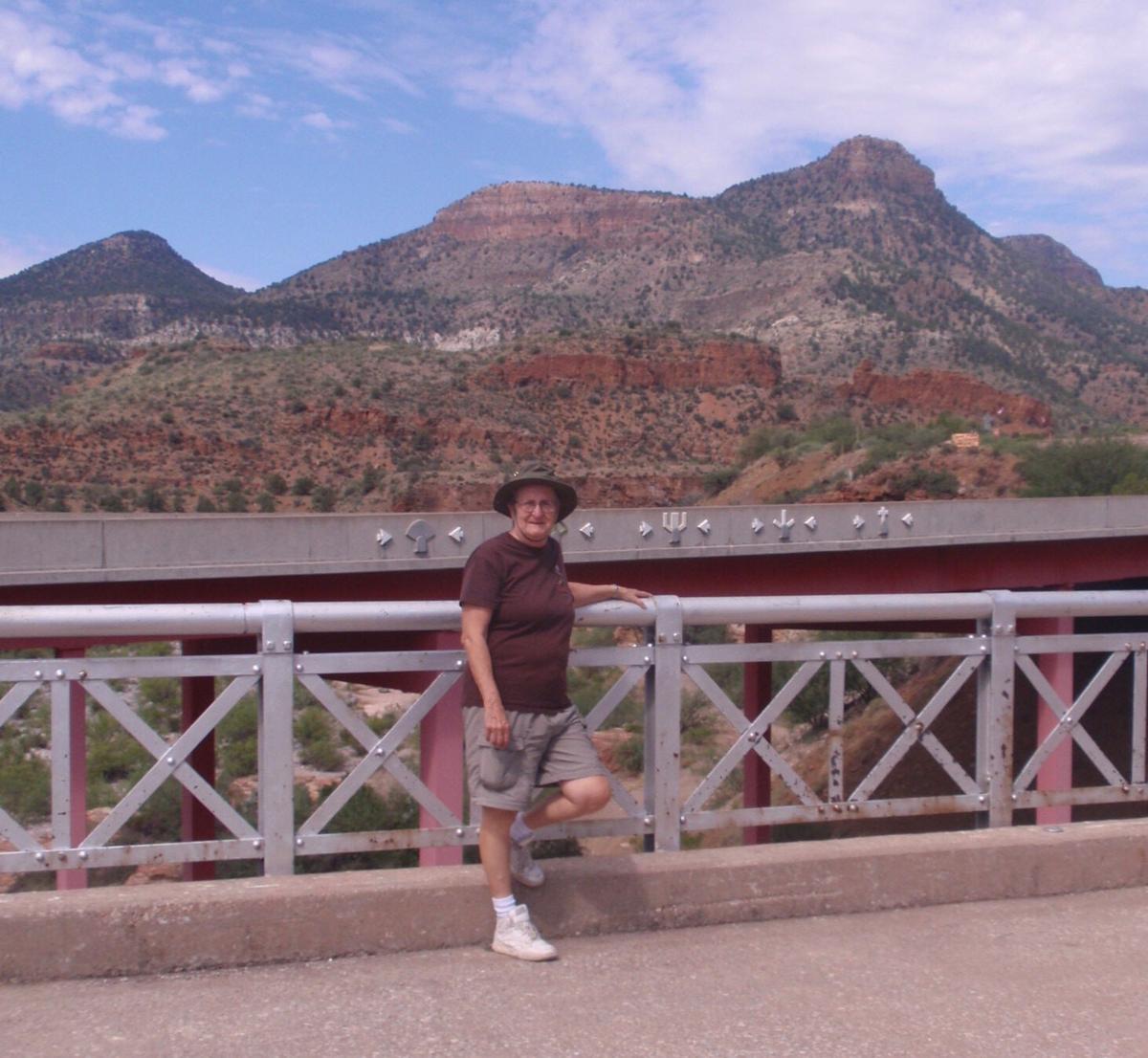 Sue Poirier at a stop above the memorable, winding Salt River Canyon. 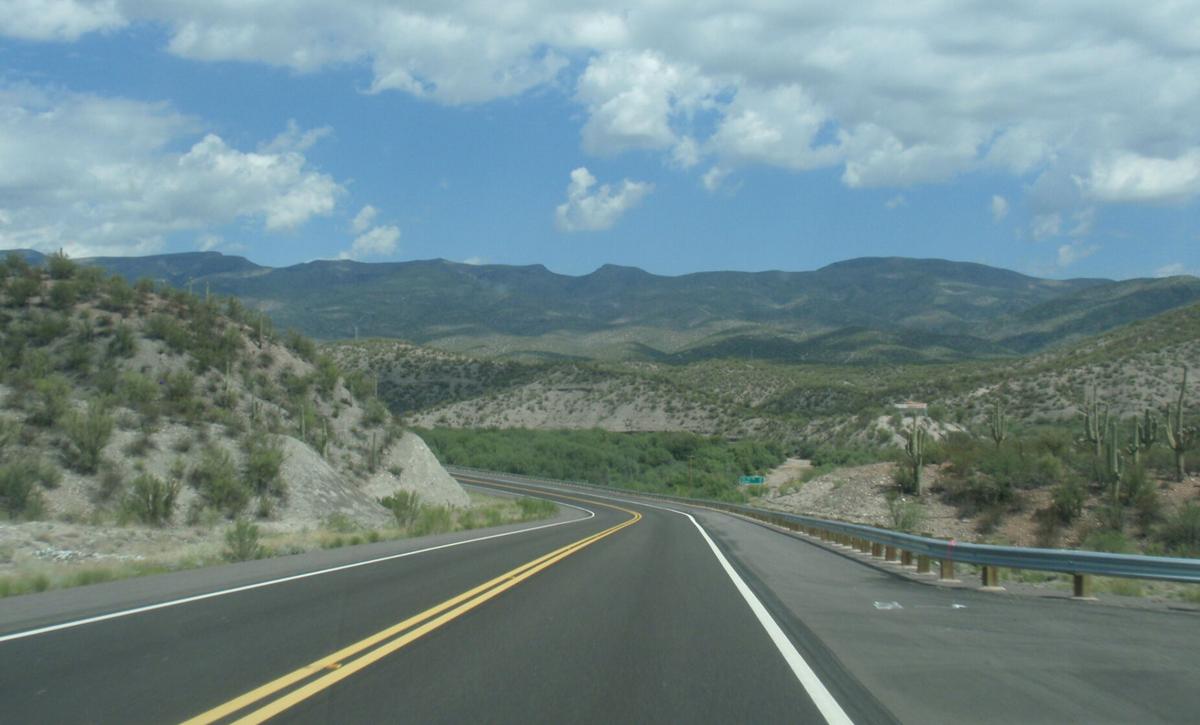 A view of picturesque Route 77 heading to Show Low. 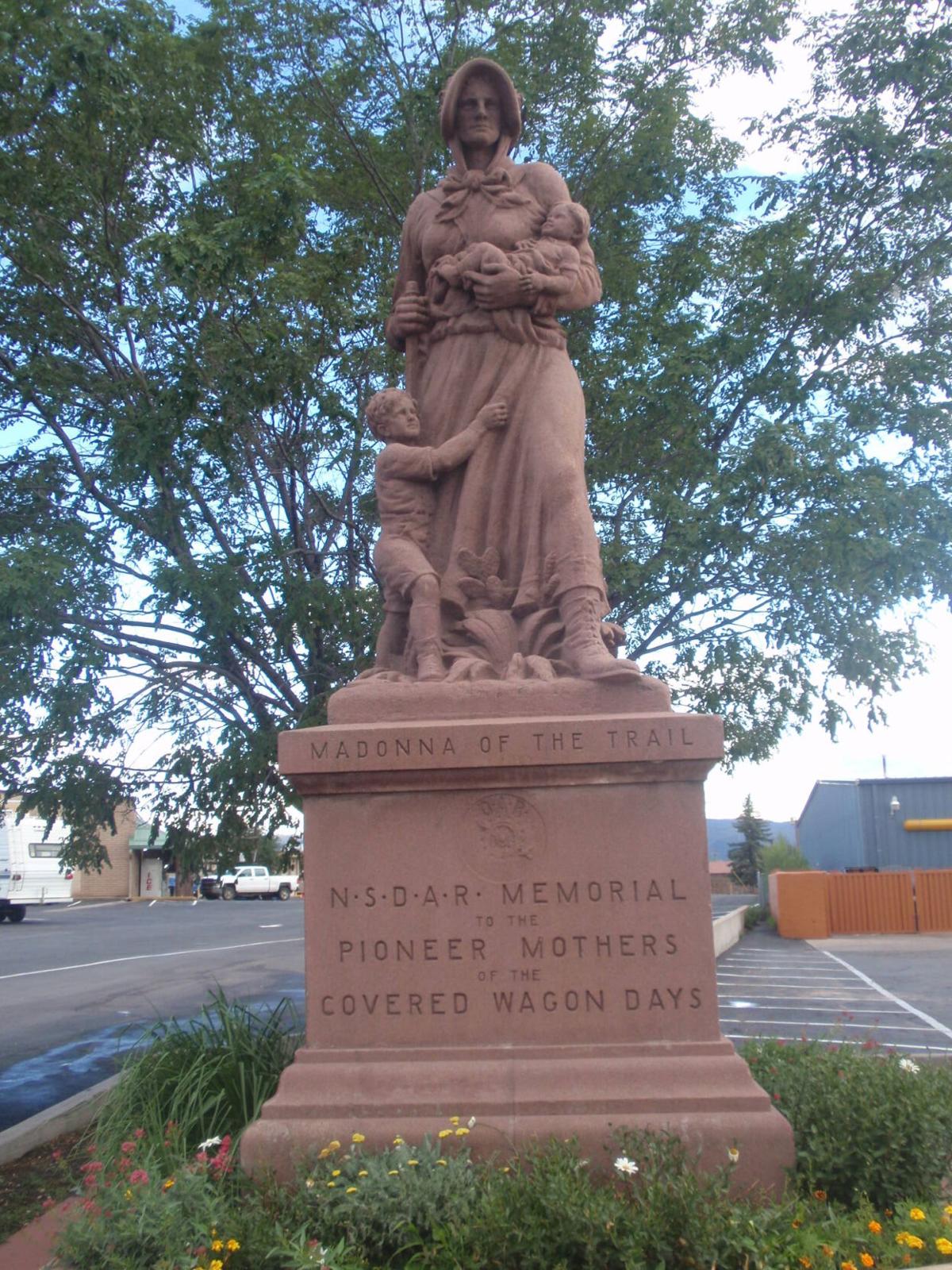 The Madonna of the Trail Monument honors pioneer mothers of the covered wagons days. 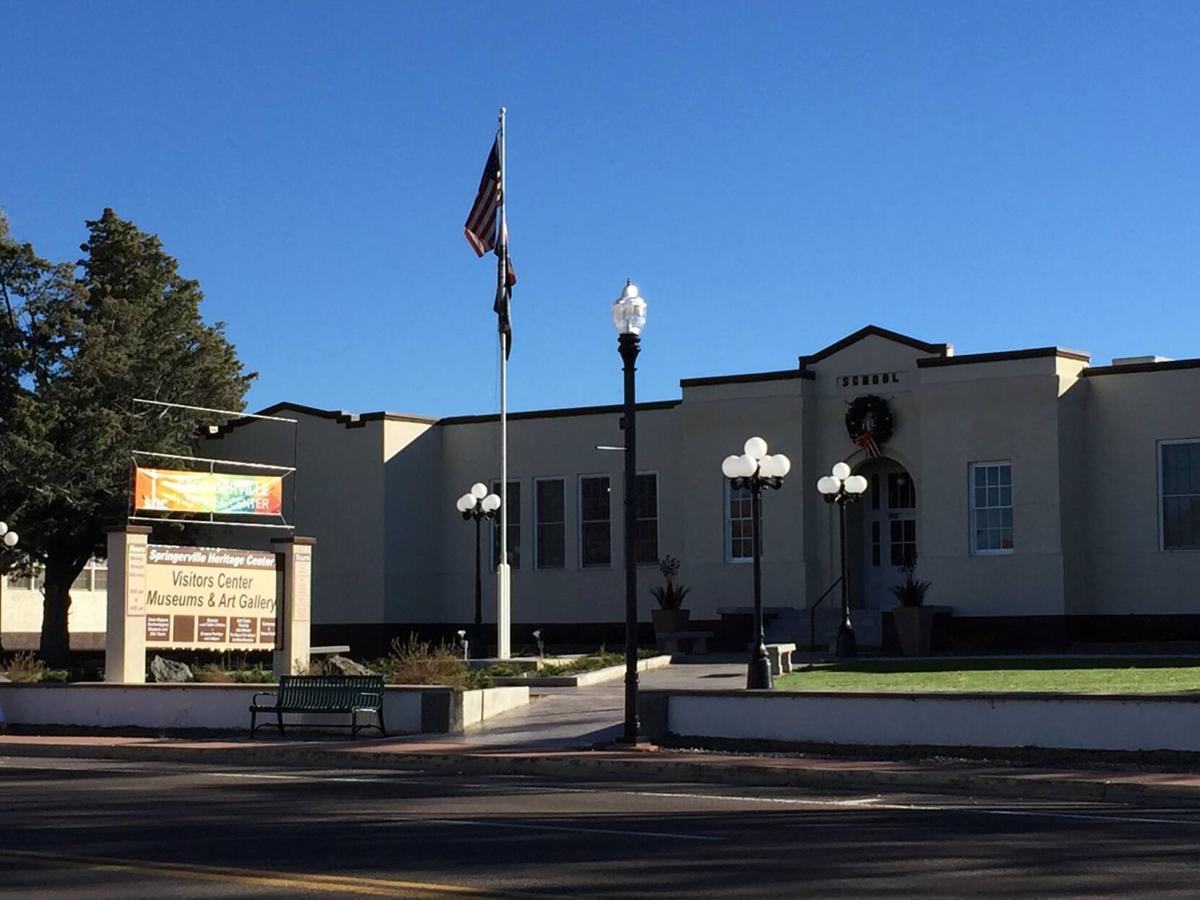 The Springerville Heritage Center is a great resource for local attractions and the area’s rich and interesting history. 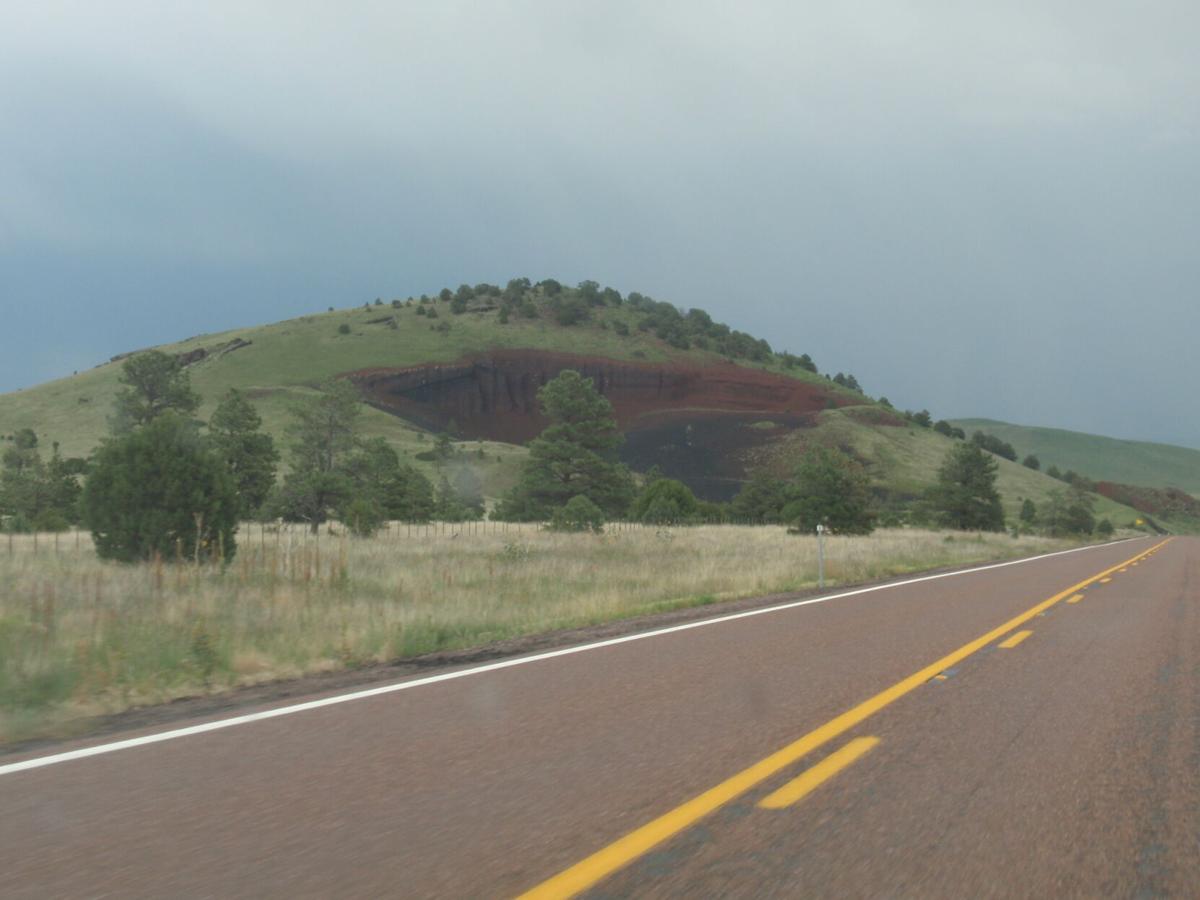 The Springerville Volcanic Field is the third largest in the continental U.S. 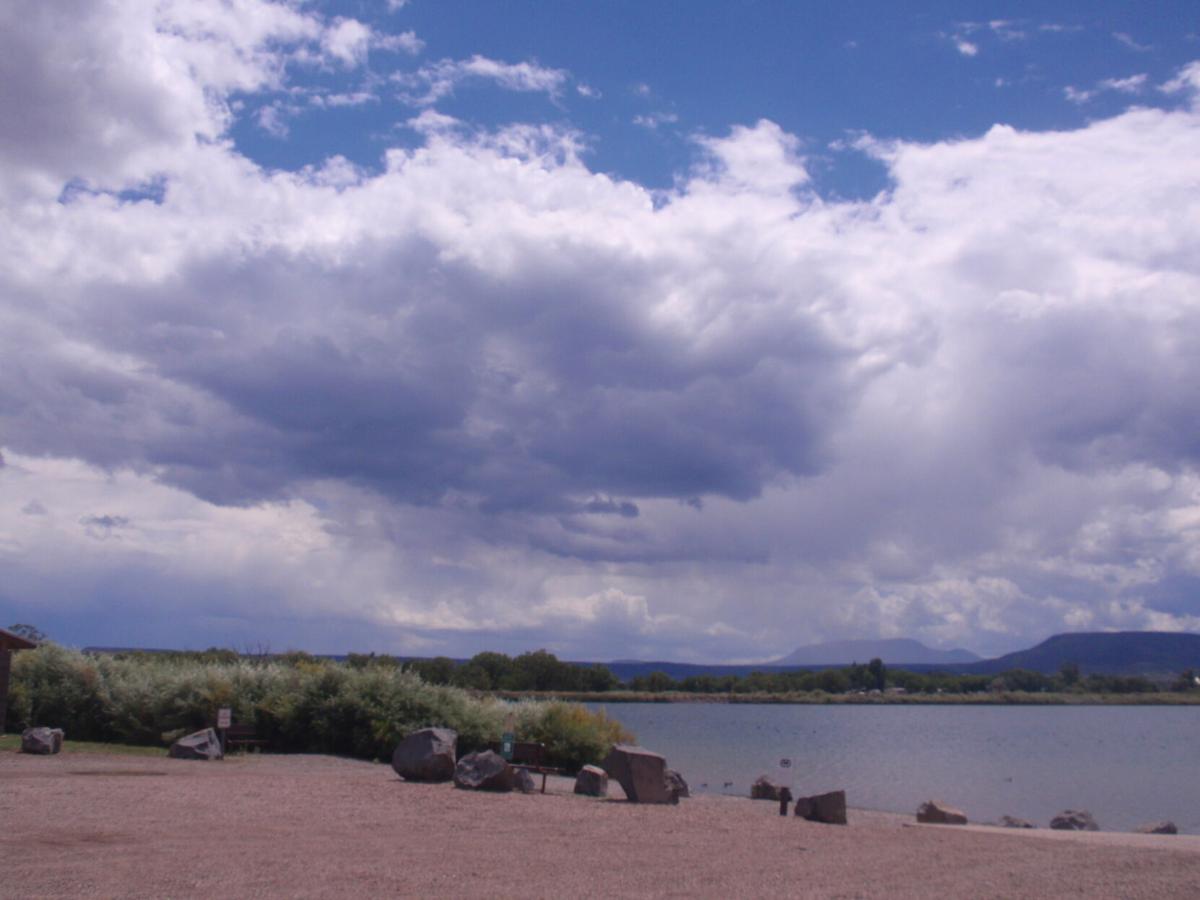 Becker Lake, built in 1880, is one of the oldest reservoirs in the White Mountain region.

In our book, “Connecting Dots,” we devoted an entire chapter to volcanoes. Having lived our entire lives in New England, we were unfamiliar with the concept of volcanoes or the presence of past volcanic activity.

During our 21-month journey across the United States, it did not take us long to become awed, enthralled and enamored with craters, volcanoes, cinder cones, magma, spatter cones, lava flows, obsidian, and lava tubes. We walked on lava, picked up beautiful lava rocks, walked through a lava tube, sat on a lava flow, and took dozens and dozens of pictures from many angles in many locations.

When we decided to make Arizona our permanent home in December 2010, we had no idea that Arizona contained the third largest volcanic field in the continental United States. When we read about the Springerville Volcanic Field, we immediately added it to our list of places to explore.

After two minutes of discussion, our route was chosen, the car was packed and we headed north on Route 77 toward Show Low. We love traveling Route 77 through Oracle, Winkelman and Globe: we love the terrain, the rock formations, the string of huge cottonwood trees and, on occasion, the river flowing. The most exciting part for us, however, is the stretch of road from Globe to Show Low that passes through the Salt River Canyon.

This canyon, sometimes referred to as the “Mini Grand Canyon,” was formed by thousands of years of erosion. With its multiple turns, twists, and switchbacks, the trip through the canyon always takes us some time. Every turn reveals a view more beautiful than the last one: the cliffs, the colors, glimpses of the river, the contrast with the blue sky produce an environment that is “too beautiful to be true.” We love stopping at the various viewpoints along the road to catch different and unique views of this gorgeous canyon.

Eventually, everyone arrives at the bottom! Getting out of the car, we are always amazed at the depth of the canyon and its beauty. We always head to the walking bridge to see the Salt River flowing rapidly to its destination. We have ventured through this canyon many times and it always seems prettier than we remember. This is a place where we slow down, breathe deeply and marvel at the wonder of it all.

Arriving at Show Low, we took a right onto Route 260 and traveled pass the towns of Pinetop and Lakeside. First thing we knew, we were entering the White Mountain Apache Reservation, with stately pines lining the edges of the route. The scenic drive, with its varied and stunning scenery, took us through the former lumber town of McNary and, eventually, we began to see portions of the volcanic field outside of Eagar.

Eagar is one of those places that brings back fond memories. This Mormon town of approximately 5,000 residents, was first settled in 1871. Today, it is well-known for its multiple buildings listed on the National Register of Historic Places. The district consists of roughly 54 acres and contains 21 structures that mostly line Main Street and Eagar Street. We spent time viewing the historic buildings and we were impressed with the well-maintained structures, especially the “Grapevine Hall” on Main Street.

We will always remember being in Eagar for one more adventure. That evening, we settled in and we were tired from a full day of exploration. We were not hungry enough to go to a restaurant for dinner, so we came up with the bright idea of going back to Eagar to get a Strawberry Funnel Cake dessert at the Dairy Queen we had passed earlier in the day! What a great way to end the day.

Springerville, a town known for its clean mountain air and recreational opportunities, was established in 1879. At an elevation of almost 8000 feet, it has a permanent population of almost 2,000 residents. This small town is full of charm, and the residents are very welcoming. This area is also known for another historical event: in 1887, Ike Clanton, who was present at the Gunfight at the O.K. Corral in Tombstone, was shot dead in Springerville.

The next morning, we headed to the Springerville Heritage Center on East Main Street, located in an 1884 renovated schoolhouse that contains the visitor center, a museum and an art gallery. This is a fabulous resource for local attractions and, through exhibits and artifacts, it is a great place to gather information about the area’s rich and interesting history.

We purchased our map of the volcanic field and explored the exhibit on the Casa Malpais site, a prehistoric Indian settlement built entirely of volcanic rock. After a long discussion with the docent, we chose not to visit that site due to the current conditions of the trail. Off we went, with map in hand, to locate our primary objective.

The Volcanic Field is described on a rest area sign: “This landscape is a hotbed of volcanic activity. With more than 400 volcanoes within 50 miles, the Springerville Volcanic Field is the third largest in the continental U.S.” Some of the rocks in this area have been estimated to be 2 million years old; the newest rocks have been estimated to be 300,000 years old. Driving along Route 60 and Route 260, it is easy to tell the newer flows from the earlier activity by the amount of vegetation covering the area.

We loved driving in this area — the beauty of the rolling hills, the green grass, the blue sky, the vegetation, and the occasional black rocks give the area a sense of peace and surreal beauty. On occasion, we saw some of the remains of a lava flow. Sometimes it was hard to remember that every rolling hill is a distinct cinder cone, and what we were seeing is the visible remnants of an explosive past. The guide book was helpful in locating some interesting areas.

On day three of the journey, we decided to explore some of the surrounding area. We headed for Becker Lake, a 107-acre lake 2 miles north of downtown. It was built in 1880 and is one of the oldest reservoirs in the White Mountain region of the state.

The average depth of 10 feet provides a good environment for trout. Rainbow trout are stocked twice yearly, and the lake also has brown trout who migrate from the Little Colorado River. The body of water is surrounded by the Becker Wildlife Area, managed by the Arizona Game and Fish Department. There is a boat ramp, restrooms, a dirt parking lot and hiking trails. The surrounding natural beauty adds an air of elegance to this small body of water.

Returning to the downtown, we located a Madonna of the Trail Monument and were delighted to discover a sculpture that looked familiar. We have seen others just like this. It is a statue of a mother with two children and it is inscribed as Madonna of the Trail Monument. Next to the monument, we found a sign that stated: “This 10 foot high, 5 ton statue, cast by St. Louis sculptor August Leimbach is one of 12 identical monuments to the bold spirit of the pioneers erected in 1928-1929 along the national old trails from Maryland to California.”

Travels with Two Sisters is a summer series of adventures in Arizona with Green Valley residents Marie “Midge” Lemay and Suzanne “Sue” Poirier. For more discoveries, check out their first three books: “One Mile at a Time,” “A Gypsy in Our Souls,” and “Connecting Dots.”