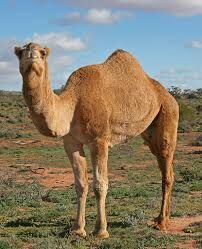 Secretary of War Jefferson Davis bought 25 camels to be used in exploration of New Mexico and Arizona in 1857.

Only known surviving photo of the U.S. Camel Corps. A member of the legendary southwestern Camel Corps stands at ease at the Drum Barracks military facility, near California’s San Pedro harbor.

In the Westward expansion era, there was a definition that captured the excitement and anticipation of the journey of adventurous pioneers. They were "going to see the elephant." This alluded to the thrill of a first-time circus attendee; something unusual and exotic lay ahead.

Well, there were no elephants to be seen west of the Mississippi, except by a few whiskey drinking cowboys. However, there were some strange, out-of-place animals.

Coatimundi and Gila monsters, of course. But beyond their uniqueness was another desert dweller that was more than a bit out of place. The camel.

Camels come in two varieties, like a hot tea request. One hump or two.

The more common is the dromedary found in the North Africa regions. They have a single hump. The species has some bodily quirks, including the hump(s), that enable them to survive the 120 degree-plus environment. Their thick hide is a heat protector.

Their height allows for more distance above the burning sands than a burro or horse. Their intelligence paved the way for domestication in biblical times. In 853 B.C., the camel was used as a cavalry mount in the battle of Qarqar (northern Syria).

The species, ungulates (hooved) are related to Arizona's javelinas and, strangely, can trace heritage back to a small creature who lived in the South Dakota region millions of years ago. So, in a convoluted sense, the camel was transported back to his original environs, thanks to a politician.

Secretary of War Jefferson Davis bought 25 camels to be used in exploration of New Mexico and Arizona in 1857. Davis would later become infamous as the Southern political chief in the Civil War.

The U.S. Camel Corps was created to deal with the imported mounts. Riding a camel had to be a learned trait. First of all, they measured 7 feet to the top of the hump — a much higher seat than the horse. But they had some advantages. They could travel further without water and reach speeds of 40 mph. The Corp would boast some 80 in number at the pinnacle of their usage.

The advent of the Civil War changed priorities, and the camel usage fell out of favor. Most were sold off to freighters, farmers and drovers.

One enterprising buyer was Hadji Ali. Given the lack of North Africa experience of Arizona natives, he was forever referred to as Hi Jolly. In time, he let his camels loose to fend for themselves in the western Arizona landscape of La Paz County. Most or all were shot by hunters. A few survived but have not been seen for years. Damn shame.

Quartzsite cemetery has a plaque recognizing Ali and the camels. That is not the only attraction. Joanne's Gum Museum is a must see. It boasts a display of global gum wrappers. I kid you not.

"Nomadland," starring Frances McDormand ("Fargo"), was filmed here. The town lies 120 miles west of Phoenix. For those who love to travel and visit exotic places, be forewarned that Quartzsite routinely registers 120 degrees in the summer.

For the better good, the experiment of dromedary usage in the West was short lived and unembraced. The image of John Wayne mounted side saddle ala Peter O'Toole in "Lawrence of Arabia" is totally unacceptable.

Scott Dyke is a Wyatt Earp historian, Western lecturer and researcher. He is a member of Western Writers of America. He can be reached at scottdyke65@gmail.com

MEANDERING THE MESQUITE: CAMELS IN THE DESERT — No Mirage in Arizona

Only known surviving photo of the U.S. Camel Corps. A member of the legendary southwestern Camel Corps stands at ease at the Drum Barracks mil…