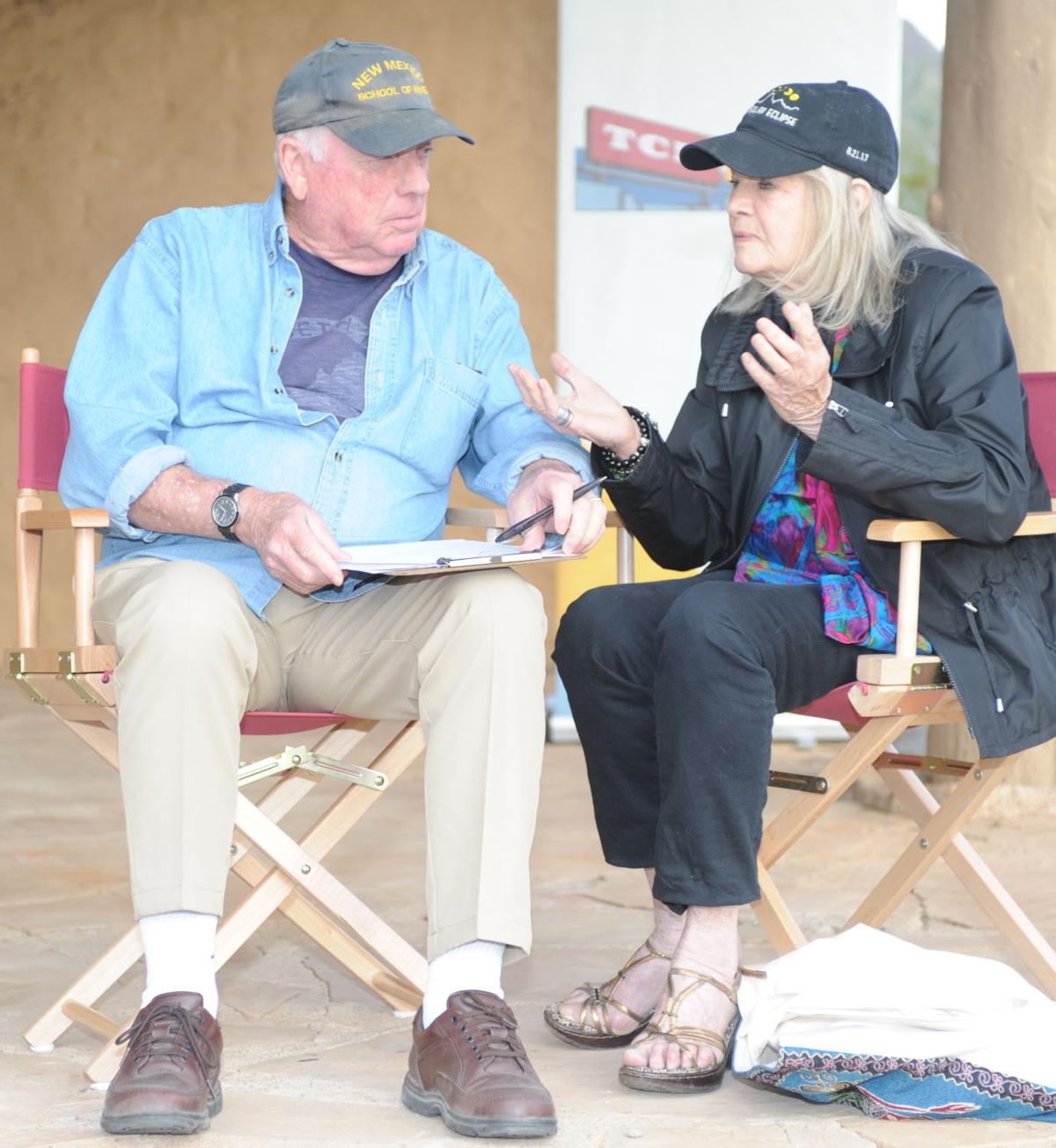 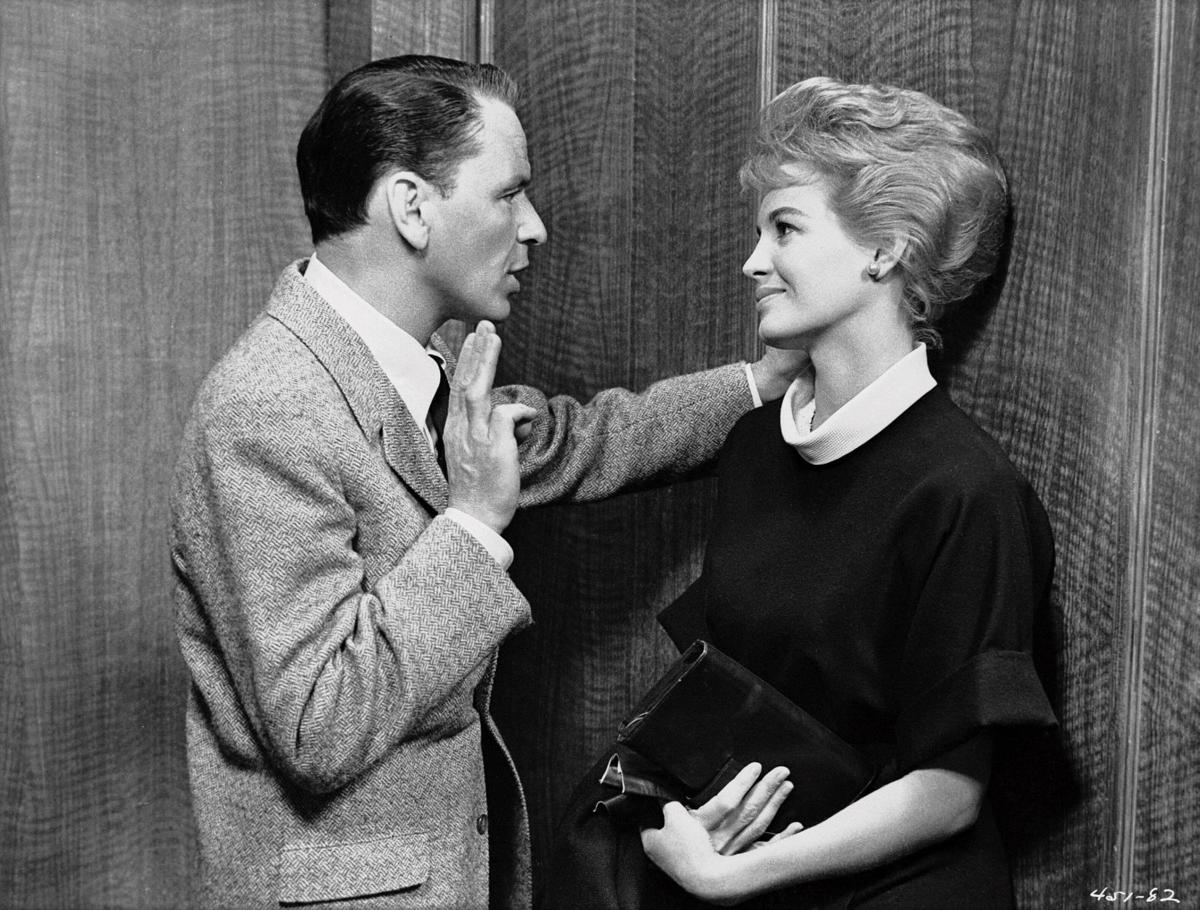 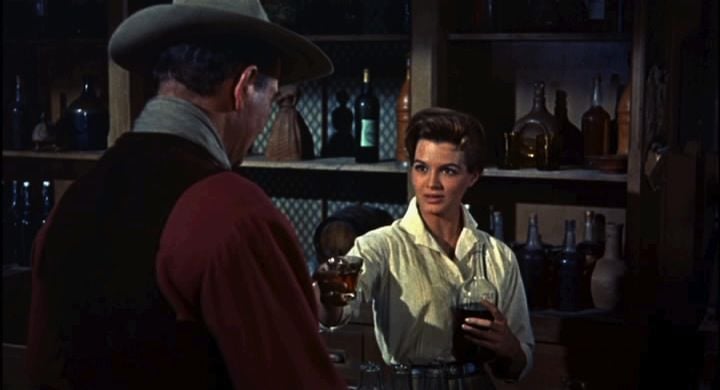 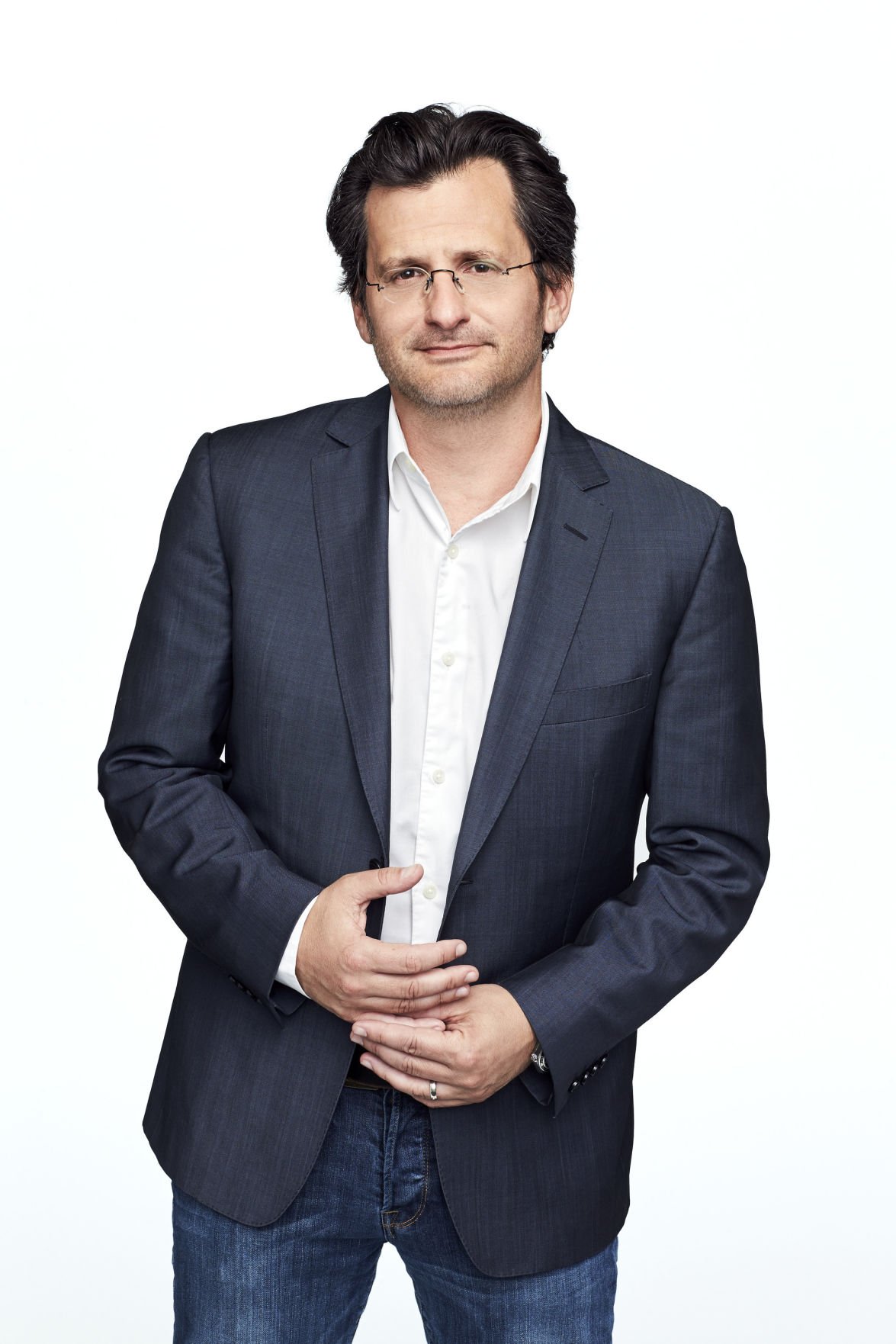 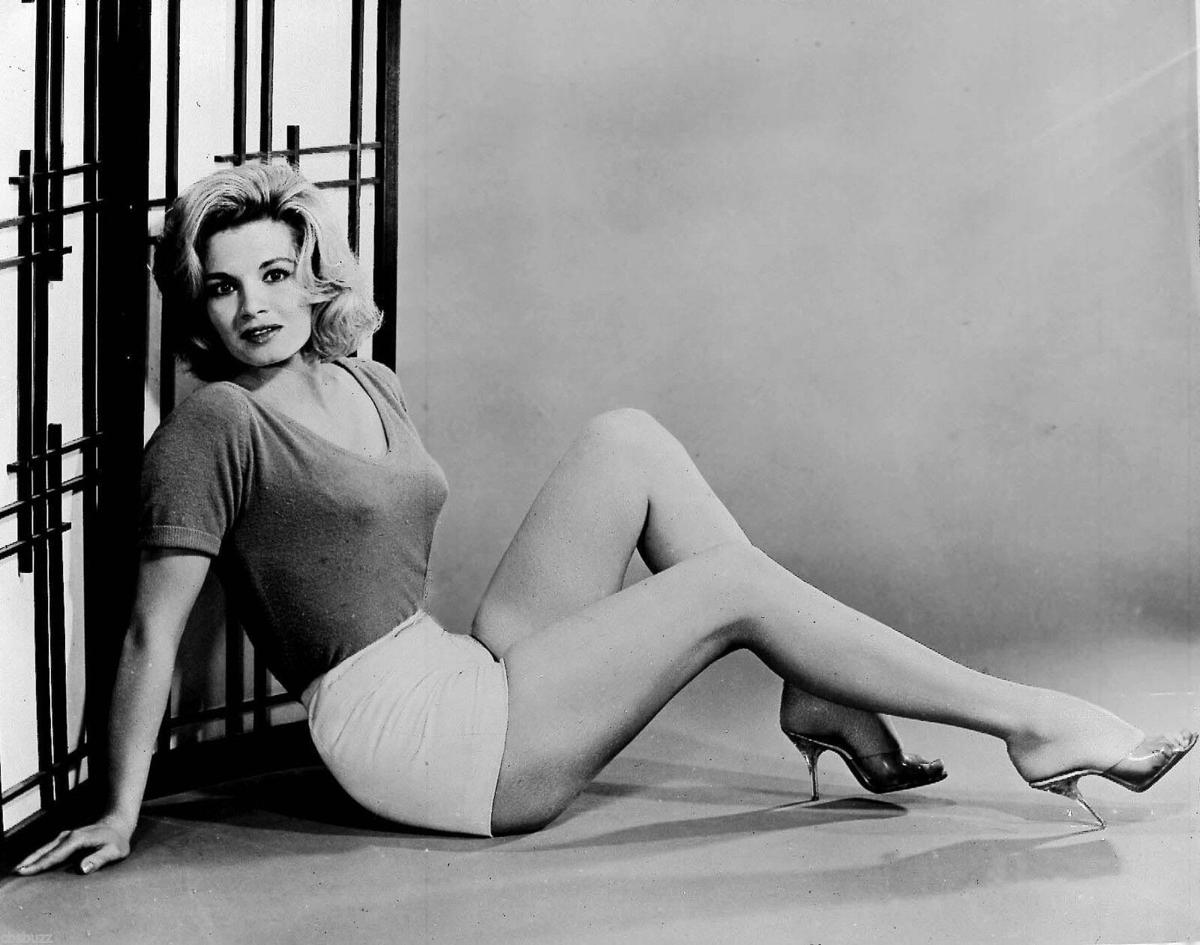 They've been called the nicest legs in the business.

They've been called the nicest legs in the business.

Recently, a tribute to a John Wayne classic (is there any other kind?) brought some notable stars to Tucson. "Rio Bravo" was made at Old Tucson, a special place that a friend, the late Bob Shelton, built especially for the making of Western films.

Turner Classic Movies was the guiding light behind the fete. Angie Dickinson and TCM host Ben Mankiewicz were brought to Tucson for the event.

After some prodding and cajoling with the TCM folks, time was allotted with Ben and Angie. So, off we went to Old Tucson studio to sit down with Hollywood's famous.

Ben and his family

Ben Mankiewicz has this prodigious gene pool. His grandfather Herman was a prolific writer; deemed a genius in his day. He joined equally noted and talented artists and writers at the legendary New York City Algonquin Round Table. He served periodically as The New York Times drama critic. Among his achievements, he served as a foreign correspondent and wrote screenplays for Hollywood. Herman worked on movie successes like "The Wizard of Oz" and “The Pride of the Yankees." He shared an Oscar with Orson Welles for the screenplay of "Citizen Kane.”

He died before grandson Ben was born, but Ben has heard all the tales of his famous grandfather.

"He was a hard-drinking man, and really funny,” Ben said. "He gambled a lot. He was fired a lot. Once, he excused himself from a gala dinner and threw up violently in a bathroom close by. When he came back to the table, he told the hostess the white wine accompanied the fish well."

He often was in the studio's dog house, literally. He was once punished by being forced to write for a movie starring then-wonder dog Rin Tin Tin. He got even by writing an ending that had the dog run into a burning building.

Ben's Uncle Joe won two Oscars. He was the director for the most ballyhooed movie of its day, "Cleopatra," the legendary box office flop starring Liz Taylor and lover Richard Burton.

Frank Mankiewicz, Ben's father, was a lawyer who excelled in politics. His relationship with the Kennedys led to an appointment as Peace Corps regional director in Latin America.

"Dad was always looking to make things better," Ben recalled. In a Hollywood moment, Ben said his Dad got Steve McQueen off on two driving citations. One for going too fast and one for going too slow. Frank was with Robert Kennedy's inner circle when Kennedy was shot in Los Angeles. He announced the senator's death to the nation.

Ben was in the Miami area working as a media host when he applied for the TCM position.

"They kept bringing me back for interviews until they offered me the spot with host Robert Osborne."

Osborne was the originator of this series that highlighted the classics.

Have there been embarrassing moments? Ben laughed and talked specifically about common errors he had made.

“It is usually a mispronouncement on air. We get flooded with emails, twitters and texts. That's how dedicated our fan base is."

He reflected upon the movie industry.

"The old studio system, in its iron-fist way, produced great pictures. The last years of their reign was from 1967-1976. 'Star Wars' changed everything. Today, it's all about the money."

One thing about Ben was overwhelmingly obvious. This guy loves his job.

Angeline Brown was born in North Dakota in 1931. So many years later, movie star Angie Dickinson remembered, "It was very cold. I always wore a scarf, and we used the stove to heat up."

The Brown family left for California when she was 11. It was not a perfect childhood.

"My father was a tall, good-looking man, but he also was an alcoholic," Angie told me.

Angie blossomed into a knockout. She entered beauty contests and talent scouts noticed. She was signed for the Jimmy Durante show and met guest Frank Sinatra. It was the beginning of a long friendship. Her relationship led to an elite pass to the famously chic Rat Pack, a group including Sinatra, Dean Martin, Sammy Davis Jr., Peter Lawford and Joey Bishop. Dickinson (her first husband's name) earned a reputation for being an excellent poker player.

"Dean was really good, far better than the rest," Angie recalled. "Frank could not sit still. He favored craps where the action was fast-paced."

She often played poker with the Greg Pecks and Jack Lemmons.

Sinatra and his buddies often referred to women as "dames" and "broads." He paid Angie his ultimate compliment: "How wonderful it is to meet a lady who is a gentleman!"

She would later play Frank's wife in the original "Ocean's 11."

After small parts in several movies, she hit it big. "Rio Bravo" was the vehicle that catapulted her to fame.

"It was my big break. Richard Brooks (well-honored director) also helped me greatly. He told me to be unique," Angie said.

In “Rio Bravo,” she played a provocative dance hall girl who melted a tough John Wayne character. It would not be her last seductive part.

Angie played opposite the biggest stars in Hollywood: Marlon Brando, Rock Hudson, Glenn Ford, Lee Marvin, Bob Mitchum, James Garner and Burt Reynolds among them. She campaigned for JFK, and the rumors still swirl about their relationship.

We share a mutual friend, Pam Marvin, widow of Lee, whom I met years ago. She remembered her experience with Lee Marvin. They did three movies together. In "The Killers," she received a beating from the Marvin character.

The next film they did was "Point Blank" in 1967. There was this opportunity to repay.

"I beat his chest as hard as I could in one scene. He was noticeably bruised the next day," she said. Angie felt Lee was troubled by his WWII experiences as a Marine. He was awarded a Purple Heart. (She was correct. Pam Marvin showed me some of Lee's paintings of islands where he fought. They were haunting.)

When asked about Ronald Reagan (his last film role was "The Killers" in 1964), Angie told me, "He was distracted. He was studying politics at that time. He was uncomfortable about playing a villain. He had to hit me in one scene. For years, whenever I saw Reagan he would apologize."

For Angie, her film career lacked something.

"I never felt like I was a real star. I was always the second billing. That changed with 'Police Woman.'"

The show was an instant success. For the first time, a woman was the lead in a hit television drama. Her character, undercover Sgt. "Pepper" Anderson, drew raves, especially from the male viewers.

The show aired from 1974 to 1978, and cemented her reputation for playing a competitive woman in a man's world. Groundbreaking stuff at that time.

In 1980, her brief role in "Dressed to Kill" was something special. Angie proved that she was still very sexy at 50. In this dark, Brian De Palma film, some elements of the hit "Psycho" were brought to mind. Angie plays a bored housewife who enters into a one-day stand with a stranger and ultimately gets slashed to death by another mystery man. After a sexual interlude, Angie does a "reverse strip" as she dresses. It is a classic moment in film. The word would be steamy.

Her marriage to legendary song man Burt Bacharach made them one of Hollywood's glamorous couples. She was acclaimed to have the best legs in the business.

She also has this independent streak, which showed up from time to time.

She walked off the set of "This is Your Life" in 1993. Bob Hope and others were left speechless. Angie remarked in an interview later, “All these people are supposed to come around and rave about you. I think they should have organized it the other way around, so I could have talked about their importance.”

She received a huge advance from a major publisher in 1989. Angie returned it when she felt they were more interested in a tell-all book. Show biz friend Johnny Carson asked her on air if she dressed for women or men. Angie answered, "I dress for women and undress for men."

She said in a 2008 interview she was still getting nude scene scripts.

I had a few more questions.

Do you enjoy today's movies?

And the standard last question was put this way: Looking back, are there any do-overs?

Sorting through notes later, I realized the question put to Angie could be construed two ways — correct the past OR repeat the past.

The look on her face revealed all. The famous wide eyes twinkled and the sensuous smile radiated.

Still sultry after all these years.

Scott Dyke is a Wyatt Earp historian, Western writer, lecturer and researcher. He can be reached at scottdyke65@gmail.com