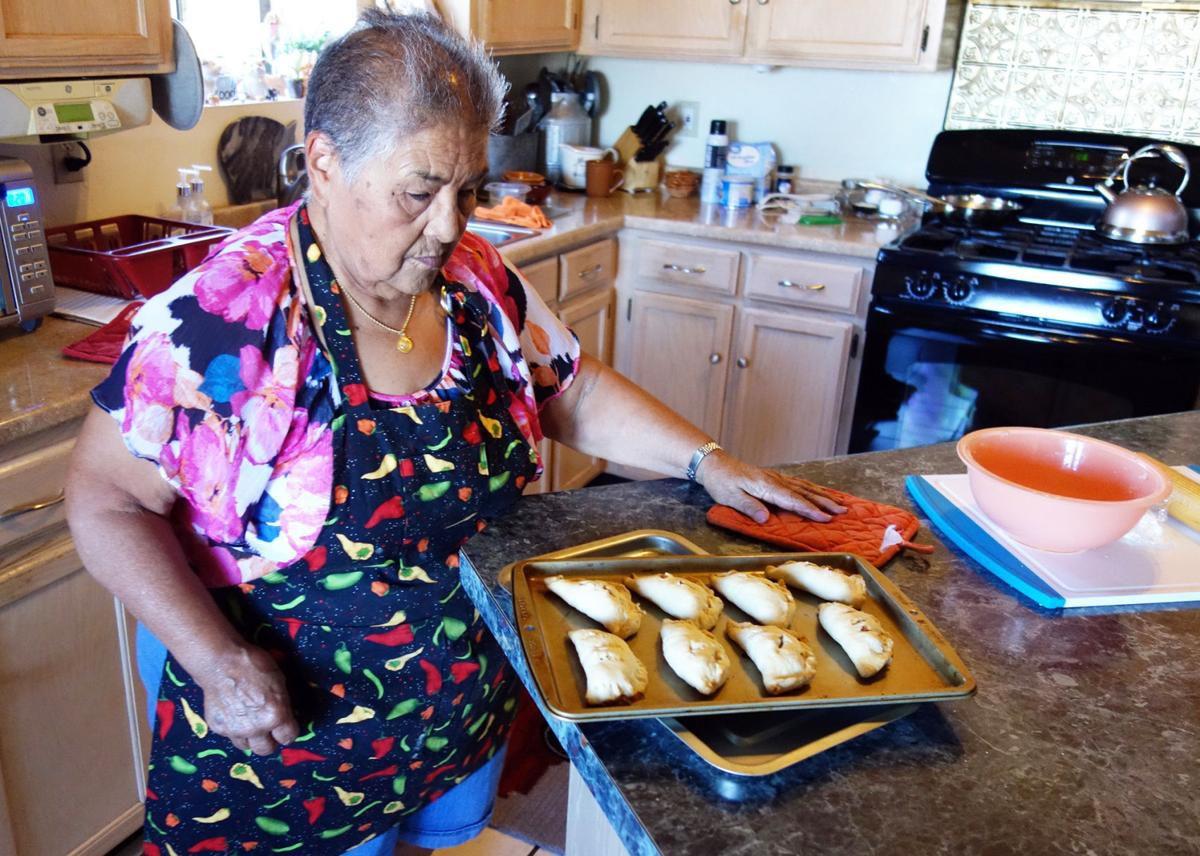 Mary Lou Jimenez first made her chicken empanadas for a dairy convention at the Rio Rico Resort more than 40 years ago. 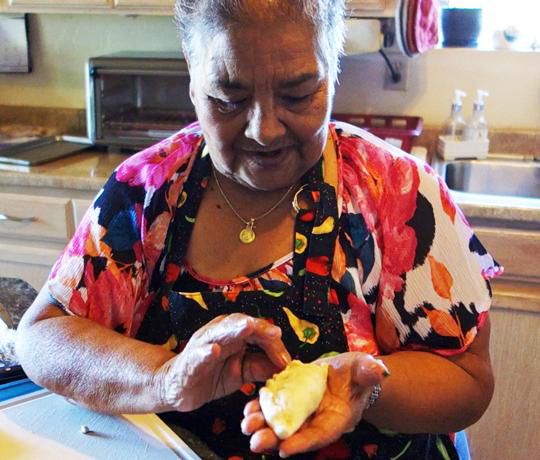 Jimenez pinches the edge of an empanada. 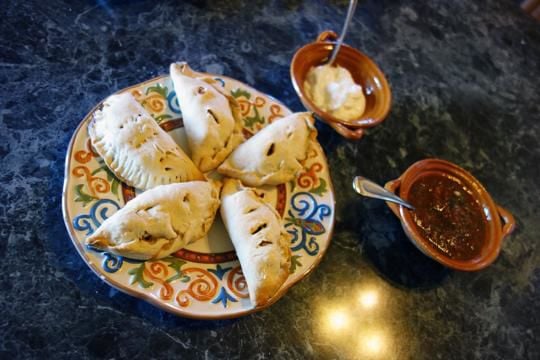 Jimenez likes to serve the empanadas with sour cream and her homemade salsa.

Mary Lou Jimenez first made her chicken empanadas for a dairy convention at the Rio Rico Resort more than 40 years ago.

Jimenez pinches the edge of an empanada.

Jimenez likes to serve the empanadas with sour cream and her homemade salsa.

She doesn’t work from a recipe, but doesn’t hesitate for a moment, either.

The 77-year-old Nogalian has good reason to be comfortable in the kitchen — in a culinary career spanning more than half a century, Jimenez has served local families, worked at a guest ranch in Montana and cooked for crowds at several Santa Cruz County restaurants.

Along the way, she’s made chili beans at Denny’s, catered to produce conventions at the Americana Hotel and roasted Cornish hen for an engagement party.

The one thing she hasn’t done is say no to a challenge.

“People would ask me, ‘Which culinary school did you go to?,’” she recalled. “I said, ‘The culinary school was in my home! I have this big bookcase and it’s full of cookbooks and that’s where I study.’ And I did. I learned everything on my own and I never said, ‘No, I don’t know how to do it.’”

Growing up on the eastern side of the county, Jimenez’s first jobs were at ranches.

In the 1950s, her family was living at the Brophy family’s Babacomari Ranch in Elgin, where her father was the foreman.

One day when she was about 13, Jimenez said, “Mrs. Brophy” asked Mary Lou and her sister, Peg, if they’d like to wash dishes for the family at night.

They jumped at the opportunity — Jimenez liked the work and was pleased with the pay.

While Jimenez was still a student at Nogales High School, she would work over the summer and Christmas holidays. She cooked for the Harrington family at the Crown C Ranch and for the McChesneys at Oak Bar Ranch.

Shortly after graduating from high school, she had an uninspiring stint at beauty school.

“I didn’t like it. That was not my thing,” she said matter-of-factly.

Another opportunity cropped up that got her back to doing what she loved.

Through her father, she heard about a summer job in Montana. The Parade Rest Guest Ranch, a fly-fishing getaway in West Yellowstone, was looking for help in the kitchen.

After an interview, Jimenez got on a bus headed north. When she arrived, on May 1, it was snowing.

In Montana, she started making her own menus and ordering food, as well as trying out a few new dishes requested by the fishermen who stayed at the ranch.

“They would come in in the morning and they’d say, ‘OK, we want our trout for breakfast,’ and I’d fry them in bacon grease.”

After that summer, she returned to Nogales, where her sisters were working at the new restaurant in town: Denny’s.

“In those days,” she said, “they had a chef at Denny’s. Everything was made homemade. Very, very, very different.”

She took a job as a cook and worked there for five years until the opening of another local fixture – The Americana Hotel.

Jimenez started out taking care of the salads at the Americana, but when the chef quit abruptly, she got promoted.

“That was when it was the Americana, let me tell you!”

The Capin family, local merchants who also owned the hotel, would frequently eat at the restaurant.

To cater to the Americana’s clientele — which she said included artists, movie stars and produce executives — Jimenez stayed up at night reading recipes for dishes like pâté, ice cream cake, and chateaubriand.

She enjoyed the glamorous work at the Americana, but left after five years when she had a disagreement with a manager.

From there, she spent 12 years working at the Rio Rico Resort where she served buffets for holidays, quinceañeras and weddings.

Moving further north, she worked another dozen years at the Cow Palace in Amado.

Eventually, Jimenez decided it was time to return home.

It had changed since her first stint there, but Denny’s was happy to take her back.

She worked at the Grand Avenue fast food joint well into her 70s, finally retiring three years ago.

“I started at Denny’s and I quit at Denny’s!” Jimenez said with a laugh.

Three years into her retirement, Jimenez hasn’t stepped away from the kitchen entirely.

On a recent Tuesday morning, she was preparing chicken empanadas at her daughter Felicia Leon’s house in Rio Rico.

Dressed in denim shorts, a flower-pattern blouse, and an apron with a chile pepper design, she offered tips as she kneaded the dough by hand.

“You always make sure that your butter is really cold, if you want your crust to come out nice and flaky.”

She pressed the dough out into circles with a tortilla press and scooped chicken filling into the middle.

Pinching the empanadas shut with her fingers, she didn’t lose any filling.

“I came up with this recipe, and I’ve been making them ever since,” she said, adding that they can also be made with shredded meat or ground beef.

Jimenez likes to bake the empanadas and then freeze some, putting them back in the oven for a quick meal or snack.

Earlier this year, she brought some to a Super Bowl party at another daughter’s house in Sahuarita.

Counting several generations in the borderlands, Jimenez’s family has passed on a mixed culinary tradition.

Her father’s side of the family came from Tucson; her maternal grandparents were born in Río Sonora, Sonora, but her mother grew up in the Sonoita area.

During her own childhood in eastern Santa Cruz County, Jimenez said that her mom didn’t make “Mexican food” a big part of the family’s diet.

“She made enchiladas, tacos and tostadas. At Christmastime she would make tamales. But that was it, that was my mother’s Mexican food.”

At the ranches, Jimenez got used to cooking dishes that satisfied different tastes.

“Most of these people were wealthy people, from back East, that had moved out here,” she said. “So ... I learned how to make the popovers and soufflés and all different kinds of pastries.”

After decades learning the ropes in kitchens of all flavors, Jimenez said that, now, she works from memory and instinct.

That’s a habit she’s handed down to her daughter, Felicia Leon.

In a pinch, Jimenez also taught her granddaughter — Leon’s daughter Ashley — how to make holiday pies.

About eight years ago, Jimenez said, she was planning to cook for relatives who were visiting for Thanksgiving.

At the last moment, she pulled a tendon in her foot and found herself in too much pain to cook.

Beginning with a homemade pastry crust, she walked her granddaughter through the steps to make apple and pumpkin pies.

Leon insisted that Ashley, now in college, is the best apple pie chef in the family.

These days, Jimenez enjoys not waking up early to be in the kitchen.

When she cooks, it’s mostly for her family.

But she still makes big batches of cookies to sell for the holidays and takes occasional orders for special dishes.

Servings: Up to 24 empanadas

Work Crisco and butter into flour. Use a food processor or combine by hand in a mixing bowl.

Combine until the mixture crumbles.

Add water slowly to bind together.

Refrigerate for a half-hour.

Separate and roll by hand into 1.5-inch diameter balls.

Using a rolling pin, roll flat to 5-inch diameter. Or press to same size with a tortilla press.

Salt and pepper to taste

Take one pastry dough and add about 1-1/2 to 2 tbsp. of filling in the center.

Fold dough over and pinch closed with fingers or seal with fork.