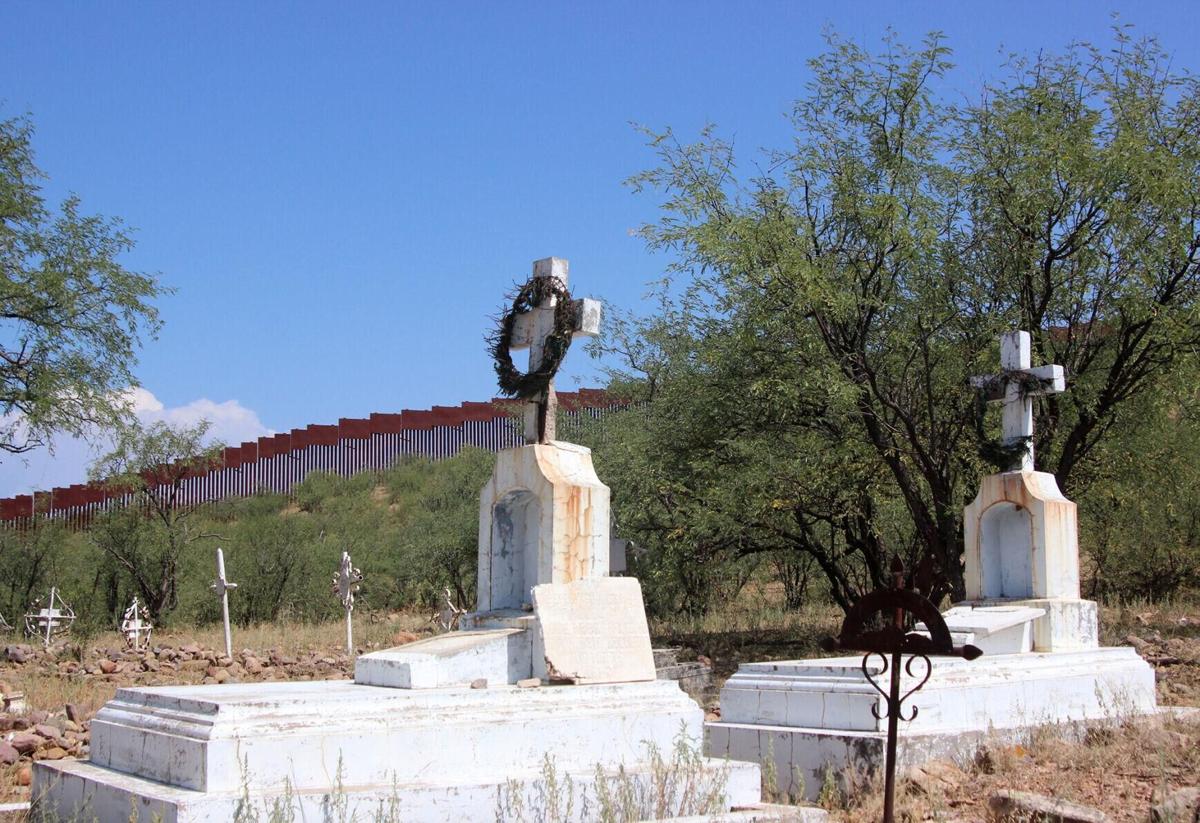 A few hundred feet south of the U.S.-Mexico border, about five miles east of Ambos Nogales, a small, forgotten cemetery rises out of the desert. 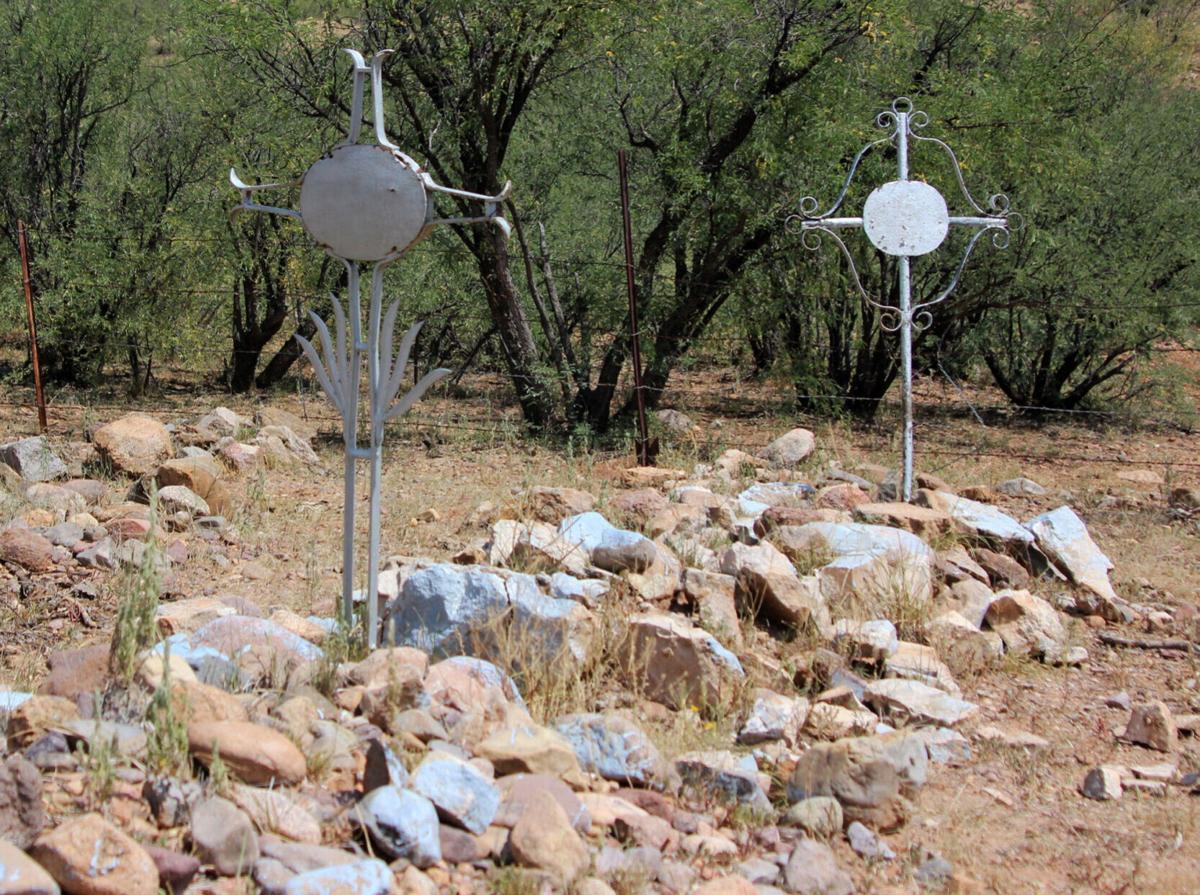 Most of the grave sites aren’t more than a pile of rocks. A handful include metal crosses or other markers. 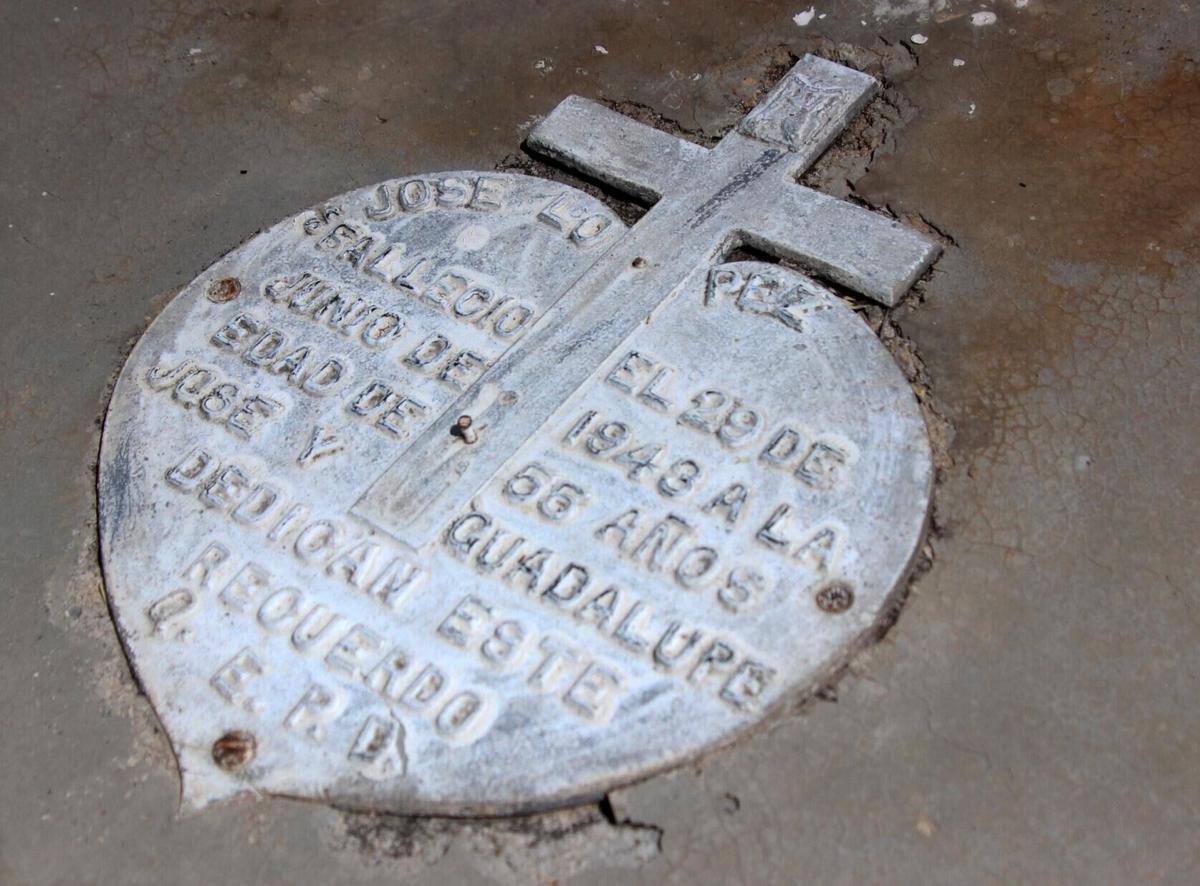 A small number of the grave sites, like this one dating to the 1940s, still have plaques, inscriptions, or painted signs giving names to the dead.

A stone’s throw from the U.S.-Mexico border, a few miles east of Ambos Nogales, a cluster of crosses and grave sites rises out of the Sonoran Desert. There are a few concrete tombs and some weathered metal crosses marking interments, but most of the approximately 70 graves aren’t more than a pile of rocks, with any identifying markers long washed away. A short distance south of the graveyard stand the ruins of a pair of adobe-brick buildings.

The desert is quiet, except for the occasional growl of U.S. Border Patrol trucks passing on the northern side of the international boundary. A few sun-bleached cow bones bake in the desert heat. The only other traces of human development are the orange-red spikes of the border fence.

The cemetery lies just outside of the Santa Cruz River floodplain, where a sandy riverbed and Alamo trees turn to densely packed mesquite. The rural community of Mascareñas, more than two miles away, is the closest modern-day settlement.

Sometimes called the Panteon de los Chinos or Cementerio de los Chinos (the Chinese cemetery), the graveyard points to a little-known part of local history: the first wave of Chinese migration to northern Sonora, which began around the turn of the 20th century.

“It’s an almost-forgotten cemetery,” said longtime Nogales, Sonora journalist and writer Julio Cesar Sarmiento. “There are very few people that know about it. Too few.”

While not much is known about the nearly-forgotten site in an otherwise abandoned stretch of sand and scrub, the cemetery still serves as a reminder of the contributions made and hardships faced by Chinese immigrants in the area, as well as the fortitude of some members of the community who managed to survive the xenophobia and violence directed at them in the first decades of the 20th century.

In a 2016 video report for Canal 7 Nogales, local historian and radio host Pablo Lechuga said the old cemetery and the slumping adobe walls about a half-mile south likely reflect a community of Chinese migrants that built railroads in the area. He said the oldest grave sites probably date to the late 1800s and early 1900s.

“The rock piles indicate burials that are more than 100 years old,” Sarmiento told the NI. Any markers, he added, were likely made of wood and rotted away over time.

Railroad-building was tough, dangerous work, and Chinese laborers were hired chiefly because employers paid them lower wages than Mexicans. Others regularly worked in clothes-washing and agriculture. Enterprising immigrant families would often save money and open stores, eventually giving the Chinese community a significant foothold in Sonoran merchandising.

The railroads helped transform northern Mexico at the turn of the 20th century, making passenger travel faster and materials transport easier. “You can see specifically that very isolated areas like Sonora (and) Chihuahua started to be very well-connected and became really important for the economy of the country,” said Luis Coronado Guel, a professor of Mexican history at the University of Arizona.

The location of the cemetery could have to do with proximity to a nearby railroad track. The line for the Nogales-Cananea railroad, constructed around 1907 to serve what would become one of the region’s most important copper mines, cuts through the desert about a mile southwest of the cemetery.

“You find very big settlements of Chinese people all along the route of the railroads that connect Sonora with Arizona,” Coronado Guel said. And the nearby river would have made it an ideal spot for cultivating crops.

The cemetery’s distance from Nogales’ urban center could also be a result of discrimination. In the 1920s, Chinese migrants in Sonora faced racist campaigns that portrayed them as vectors of disease and claimed that the Chinese stole jobs from Mexican workers. Laws prohibited intermarriage between Mexican women and Chinese men and hampered the migrants’ ability to work.

By 1931, the Sonoran government openly sought to expel Chinese migrants from the state, driving them off their land. Many immigrants were killed during the anti-Chinese campaigns.

The xenophobic attitudes of the time meant existing cemeteries might have turned Chinese families away. “It’s very probable that Chinese people needed to build their own cemetery to be buried and not be in the … Catholic or Protestant cemeteries, or even civil cemeteries,” Coronado Guel said.

Besides the rock-pile graves that make up the majority of burials at the cemetery, there are also more than a dozen newer sites, with poured concrete tombs and inscriptions that are still readable despite years of corrosion. They list deaths in the 1930s and 1940s and last names like Lopez and Granillos.

Sarmiento said the concrete tombs likely hold Mexicans who were granted parcels in the area through a land reform program after Chinese workers were forced from the land. For Mexican farmers, burying their dead at the nearby graveyard would have been a matter of convenience. “For that reason, (the graves of Chinese immigrants) started to be combined with burials of farmers from Mascareñas,” he said.

Patricia Robles Payan, a Nogales, Sonora author who visited the cemetery while researching her 2002 novel about early Chinese immigrants in Sonora and Baja California, offered another possible explanation. She said the newer graves could be evidence of a community of Chinese residents that managed to survive the expulsion campaigns, living in relative isolation and adopting Mexican names as a form of protection.

Part of the earth

These days, the Panteon de los Chinos doesn’t see much traffic, though footprints in the riverbed and trash left in the area – discarded shirts, plastic bottles – point to another kind of business that might still be thriving in the area. Where the river crosses the border, the tall bollard fence separating the two countries gives way to a chest-high vehicle barrier.

A century later, the story of Chinese migration to Sonora and the persecution migrants suffered isn’t a well-known chapter of local history.

In part, that’s due to the passage of time. “This city is made up of a lot of people who arrived in the past 50 years … there are a lot of things they don’t know about the history of this border region,” Sarmiento said.

But it’s also due to the uncomfortable, violent nature of the events. “It’s a story that people want to remain forgotten,” Robles Payan said.

A small number of Sonorans still trace their heritage to early Chinese immigrants. One of them is Ruben Munguia Chon, a 48-year-old construction worker from Hermosillo whose grandfather arrived to Mexico on a boat from China in 1897. His grandfather changed his name to Jose Domingo Chon Bing after arriving in Guaymas, Sonora, went to work at a hat factory and eventually married a Mexican woman. Growing up, Munguia Chon heard stories about his family’s history from his mother, and also learned about the violence that Chinese-Mexicans faced.

A few years ago, he started a Facebook group for Sonorans descended from Chinese migrants that now has 42 members. He met many of the members at a meeting for people who played extras in the film “Sonora,” a 2019 Mexican movie about the persecution of Chinese migrants in the state, set in the year 1931.

Munguia Chon hasn’t visited the Panteon de los Chinos in Nogales, but he said that the few graves that survive there are also a reminder of the many immigrants who weren’t afforded such a burial: “People who don’t have graves like the Chinese cemetery in Nogales. There must be many whose remains are just part of the earth, and there aren’t graves, there isn’t anything to remember them.”