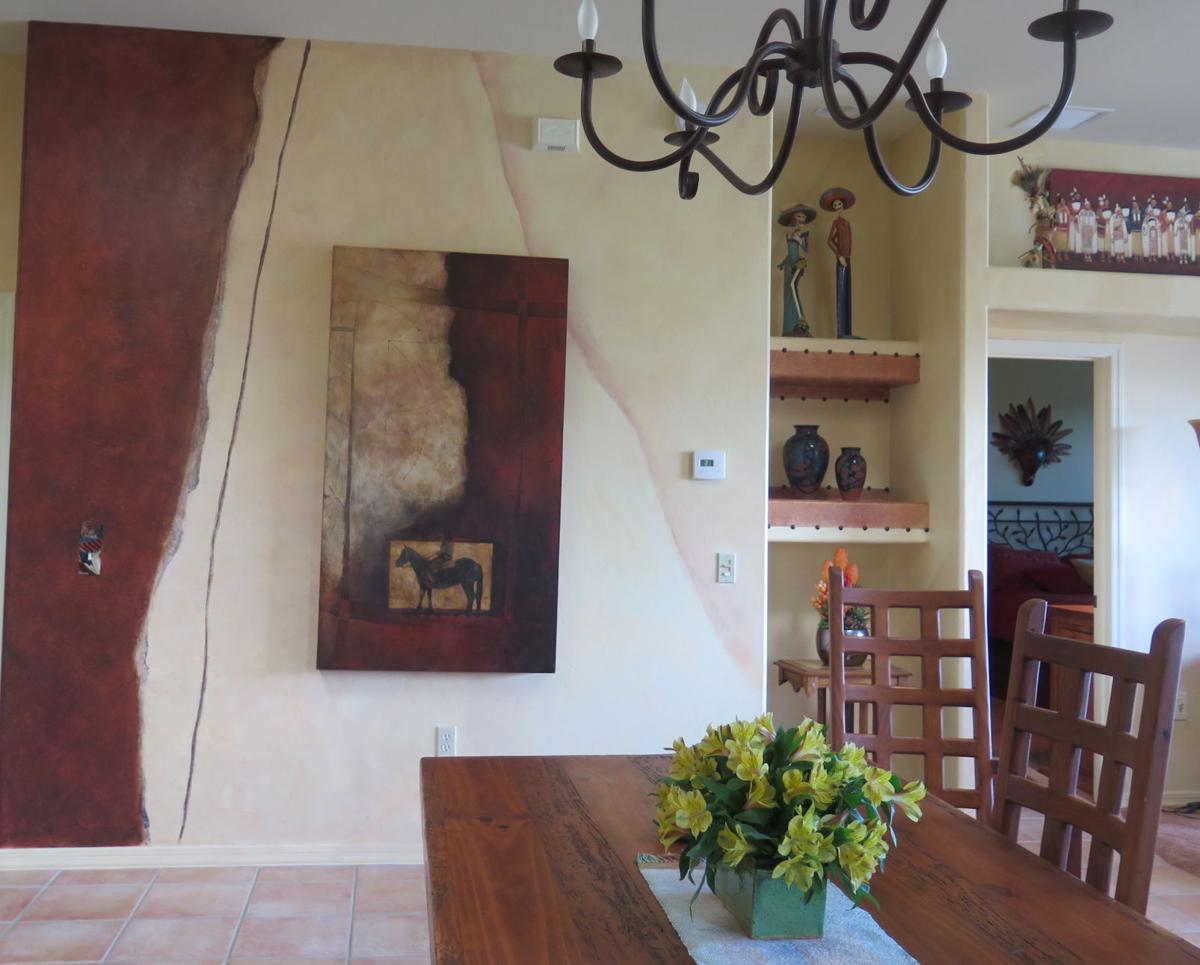 Artist Bill Key painted about a third of the dining room wall to blend in with the couple's art. Note the painted shelves with nail heads for accent. 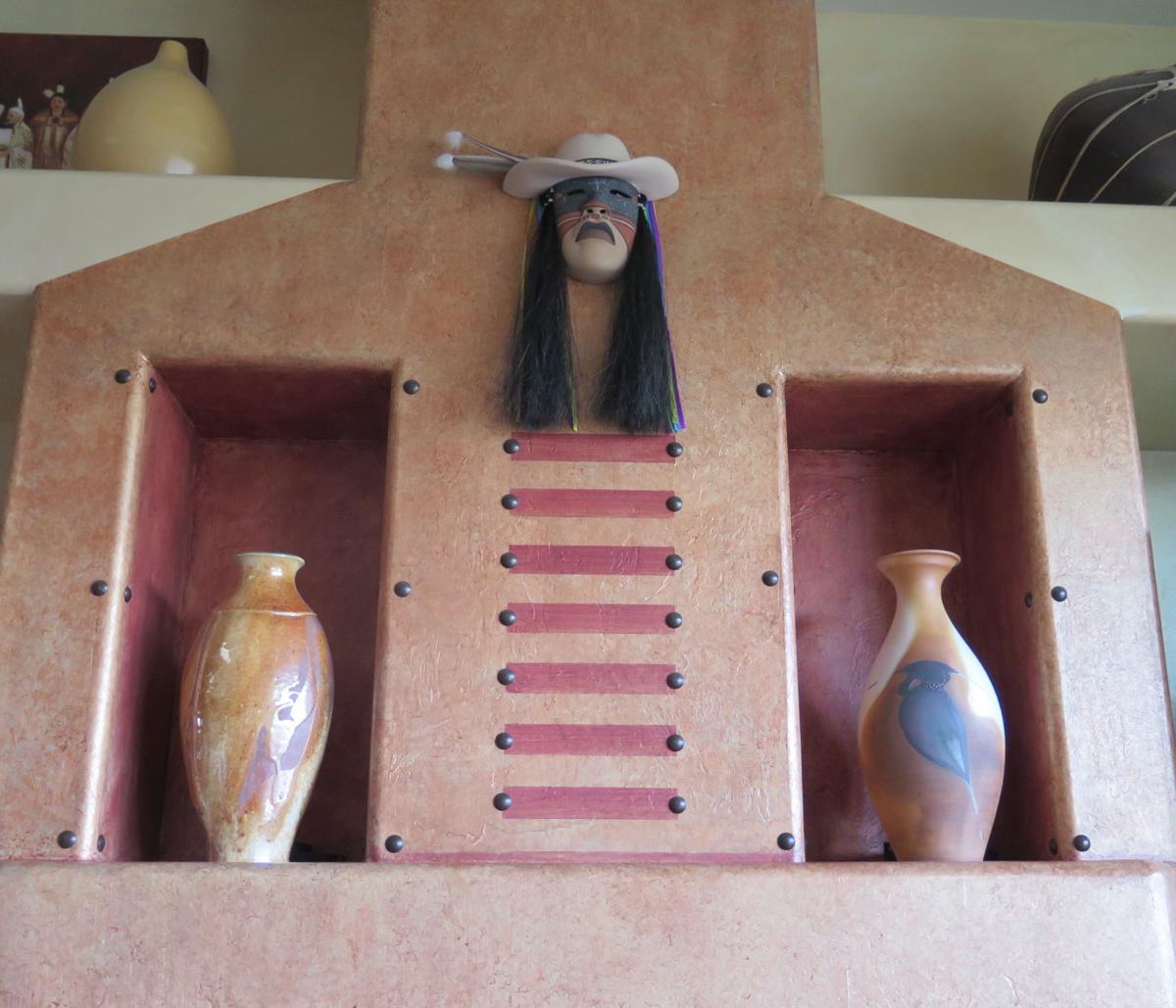 Artist Bill Key transformed the top of the fireplace with faux textured paint and added horizontal lines and nail heads for interest. Stone and Kramer added the accent pieces. 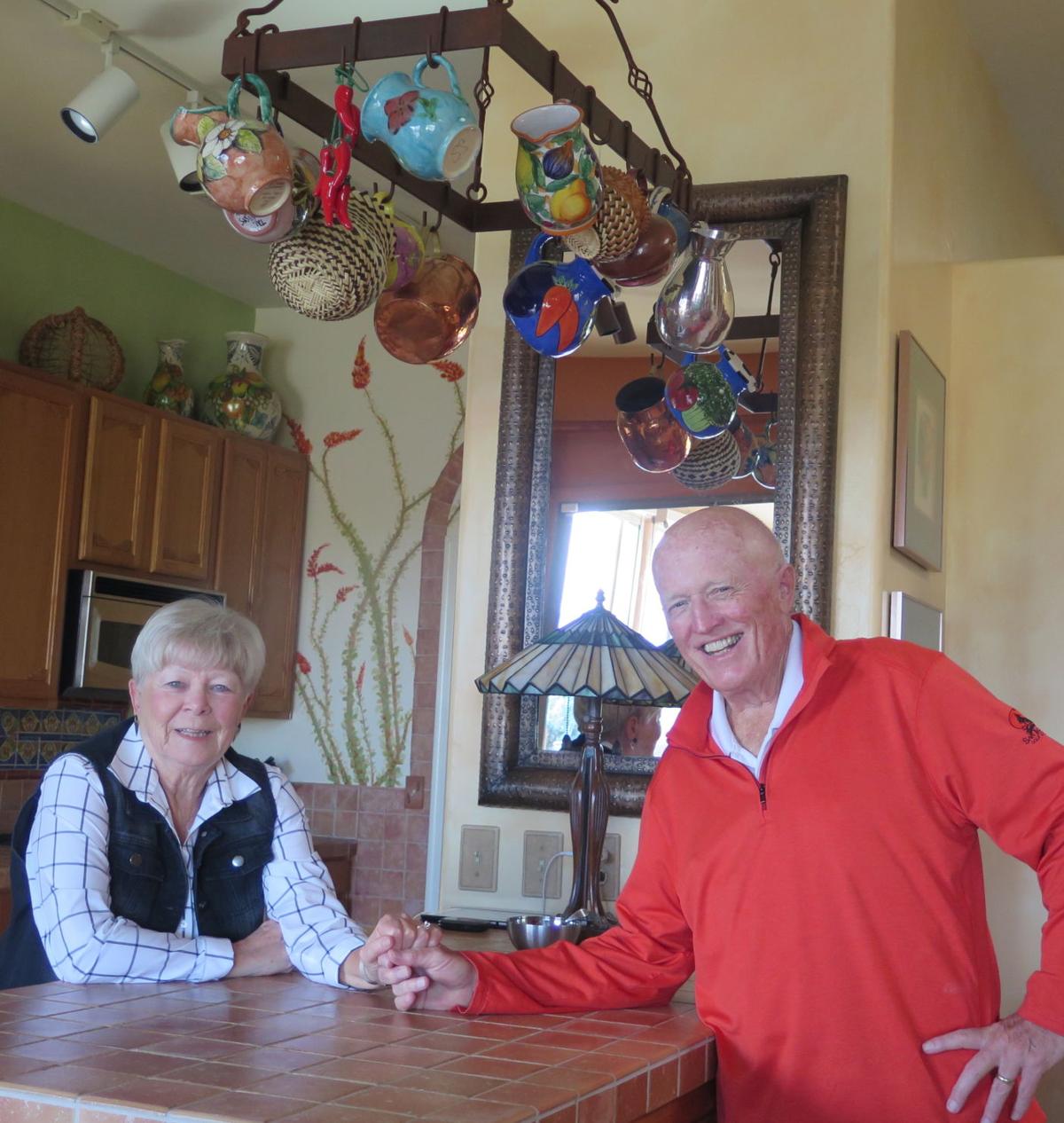 Sandie Stone and Tom Kramer enjoy the new look in their kitchen and dining room. 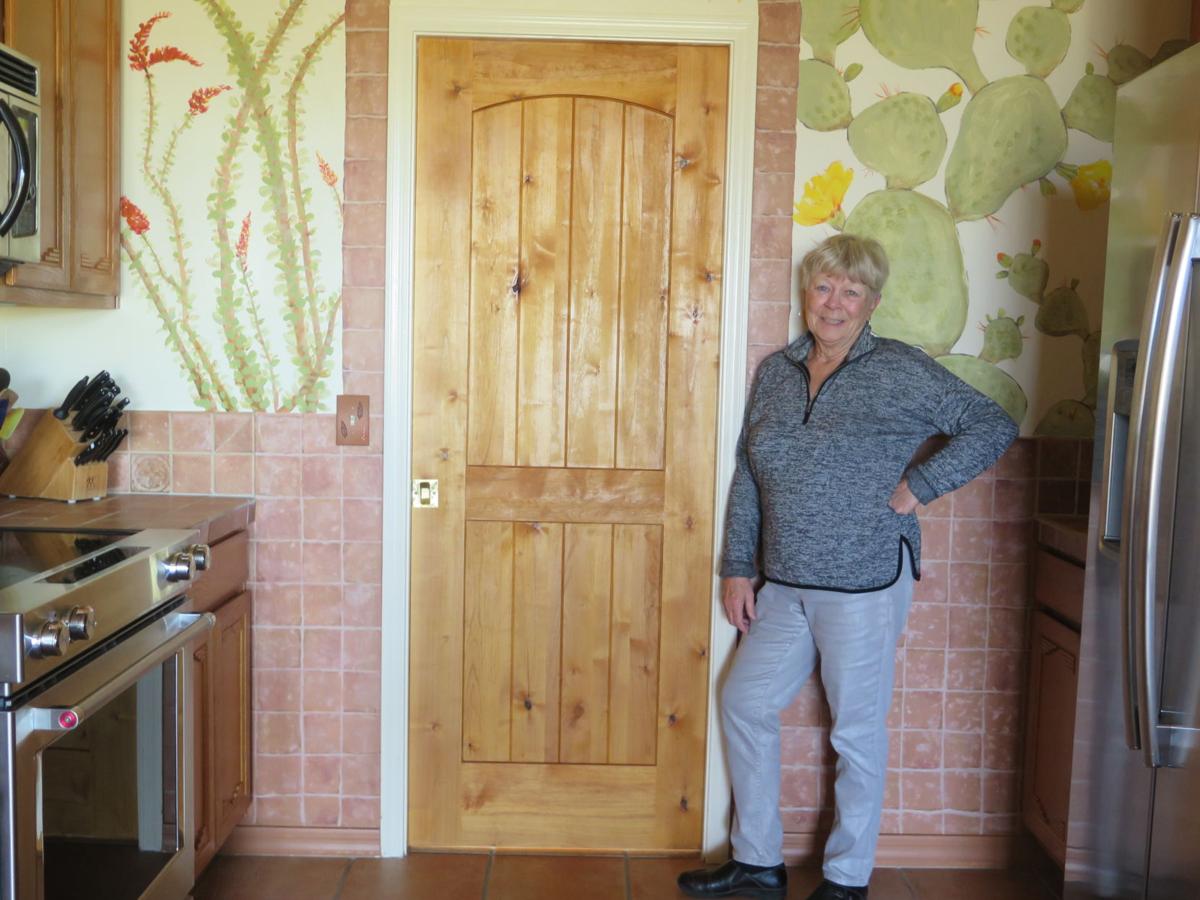 Sandie Stone is pleased with the cactus paintings and many faux tiles painted in her kitchen by artist Kari Miller. 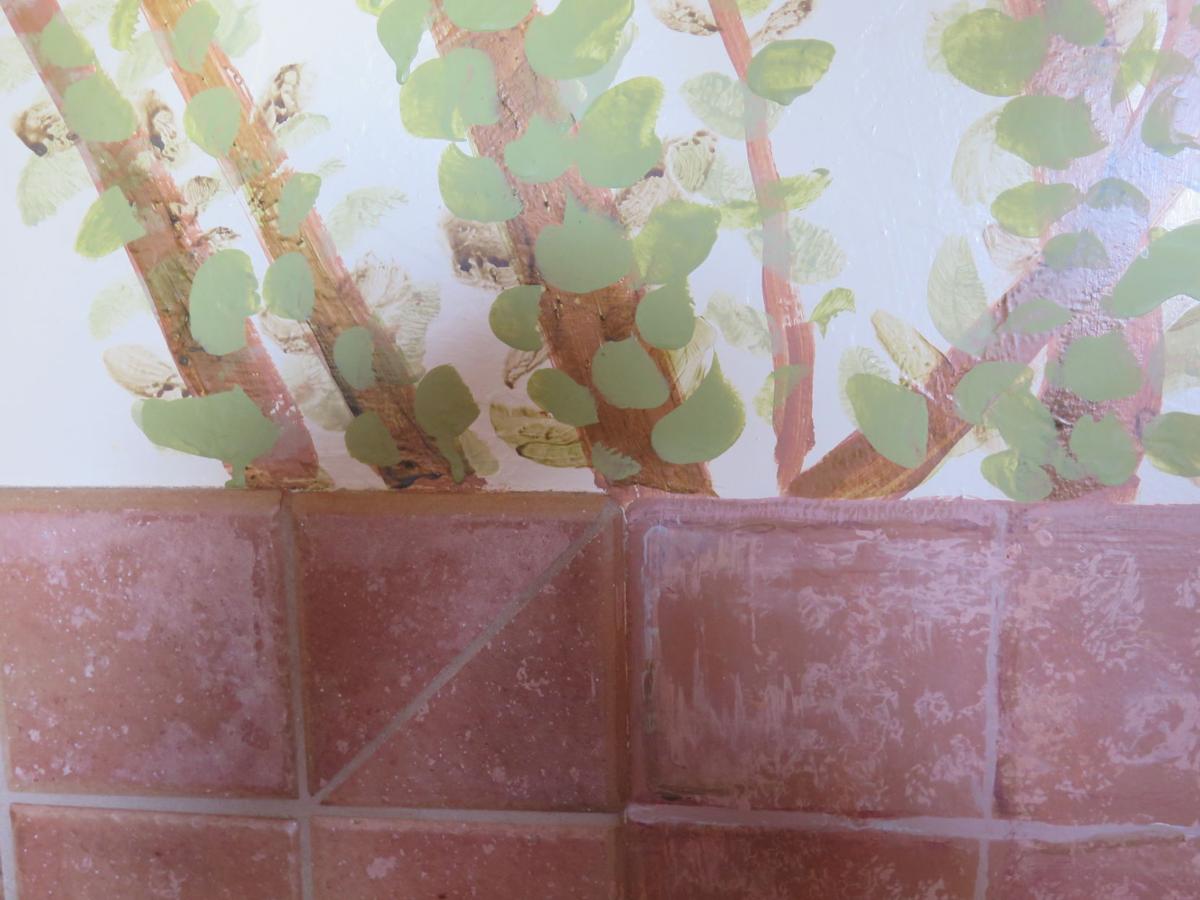 A close up of one real tile, with all the other painted ones.

Husband and wife Tom Kramer and Sandie Stone had lived in The Springs neighborhood in Green Valley for a few years, but were always open to moving if a home with a view within The Springs became available.

When just such a home with a good view of the Santa Ritas was for sale, Kramer and Stone made the move.

Stone knew she wanted the kitchen to have some art features and had admired the work of artist Kari Miller. She invited Miller over for a “look-see.”

“I knew I wanted a mural in the kitchen and asked her if she painted murals. She said yes. Tom and I went away and left her alone for four days. When we came back we were flabbergasted,” Stone said.

That’s because the artist/muralist went all-out to create a one-of-a-kind kitchen and painted the upper half of a blank rear wall with cactus.

Kramer and Stone then added other unique accents to the kitchen. A hanging display of colorful pottery pitchers, along with a couple of woven pitchers, added to the mix.

A whimsical kitchen-themed painting they bought “for a song” — as the only bidder at an art auction — fills an ideal spot on the wall. They bought four chairs with artful accents that blended well with their style and color choices. And a just-right rooster they found at a flea market in Mesa sits atop the kitchen cabinets with other accents.

“We chose together and we have similar taste,” Kramer pointed out.

Stone said once the kitchen was finished so artfully, the rear walls of the open-plan living and dining room looked bland. She recalled seeing another artist/painter on a home tour and called him to see how he could make the wall — which includes shelves and a fireplace — blend in.

Artist Bill Key didn’t disappoint. He painted shelves and a portion of the dining room wall to blend in with the deep burgundy shade in a prominent artwork. He also added nail-head accents to the shelves, making them an eyecatching feature, and the fireplace received a whole new look and feel.

The couple's dining room table is made of Mexican red pine with alternating lengths of wormwood, and it blends in with their dining and living room accents.

“The previous owners had a table we liked. We asked them where they bought it, and we bought one like it at the same furniture store in Tucson,” Stone explained.

As of now their home is finished, unless they see a must-have that fits their style and décor!